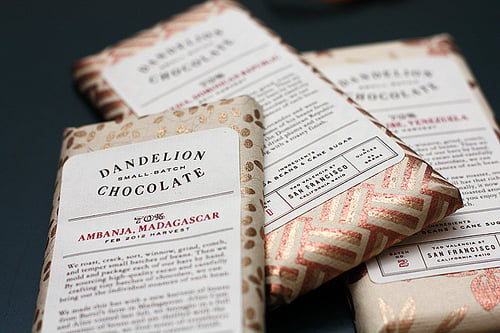 Even though globalization has made things pretty available everywhere, and things like Speculoos spread and Fleur de sel can now be found in America, it hasn’t always worked quite the same the other way around. Some American things haven’t made it across the Atlantic and people often think that Americans subsist on junk food because at the stores that cater to expats, and in the “American aisle” at the supermarket, there are things like Strawberry Fluff (which I keep explaining to them that that’s something I’ve never seen in America), boxed macaroni & cheese, caramel-flavored microwave popcorn, bottled salad dressings, and powdered cheesecake mix, which I think I find scarier than they do.

And while there’s nothing wrong with a pour of ranch dressing or a Fluffernutter every now and then (although hold the strawberry-flavor..), those are not exactly the best that America has to offer. I often get asked by folks in the states what kind of things people from America they should bring to their French friends or hosts. And while it’s tempting to bring them something amusing like chocolate cake mix or boxed macaroni and cheese, they don’t see the same humor mixed with nostalgia in them that we do. (And yup, they have boxed cake mixes here too, so they’re not novel.) Peanut butter is also dicey; while we in America devour it, many French folks have an aversion to the flavor of it. Space is also at a premium so while it’s fun to think how delighted they would be to get a 2-gallon drum of “French” salad dressing or red licorice whips from the warehouse store, you’re probably better off devoting that luggage space to something that they’ll actually use and eat.

So if you bring something along, realize that bigger isn’t always considered better here. And although you might be tempted to super-size your purchases, it’s okay to bring modest sized boxes or bags of things. Note that there are a few sweeping cultural references based on generalizations. France, like American, is a diverse nation of people with various tastes. So while there are people in France that do like peanut butter, it just isn’t a popular item here for reasons you should ask your French friends about.

Here are some things I recommend toting along. Of course, if you’re coming from somewhere else, perhaps there are similar things in your country that might be of interest. 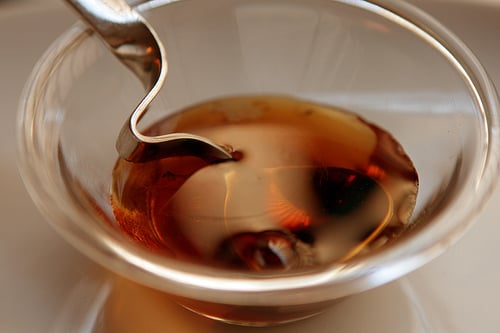 Although this can be found in natural food stores and supermarkets in France, a bottle is really a true “American” (and Canadian) treat. However French people don’t usually douse their morning croissant or brioche with maple syrup, so a small bottle is sufficient. Suggest they drizzle it over plain yogurt. French people do love honey so if there is a locally produced honey in your area, that’s a neat gift since few of them have tasted honey made in America, such as tupelo or mesquite honey.

There is also a great love of jam in France, however there is a lot of that here already, and most of it is quite good. However if there is something rather special, especially something made with good raspberries or other bushberries like boysenberries or olallieberries, or things made with varietal citrus like Rangpur limes or Meyer lemons – which you don’t come across in France – those would make fine gifts. 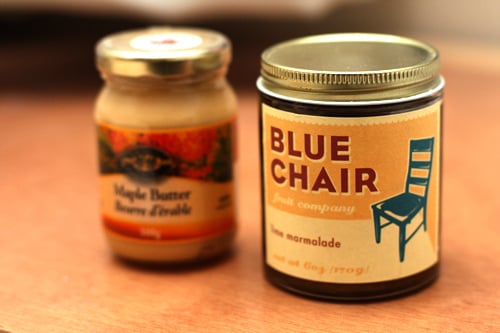 These are just starting to appear in specialty markets and cost around €7 for ten cherries. However they’re still novel and most people haven’t heard of them, but do like them when I give them a bag. The ones at Trader Joe’s or American Spoon Foods are always a hit.

You can now find measuring cups and spoons in kitchenware stores in France, even though they mostly use a scale (un balance) for measuring ingredients. But for some reason, the small offset spatula still eludes them, in spite of the fact that larger ones are available. They only cost about $2.99 and I reach for mine just about every time I bake something. A friend worked at a Michelin 3-star restaurant and noted one of the cooks did brisk business bringing them back from the United States and reselling them to the other cooks.

These have come to France, but like dried sour cherries, not that many people have one yet. And they’re also quite pricey, so one of these makes a good gift. You can get them from Microplane and I’m a fan of this one from Oxo.

A friend of mine who is a cook, every time I go back to the states, pleads with me, “Please, Daveed. Bring me back that heavy-duty foil. As much as you can carry!” French foil is really thin – you could read Le Monde through it – and rips easily, causing a lot of frustration to cooks. It drives me nuts as well because you can’t reuse it. So make your favorite French cook happy and stock them with the good stuff. 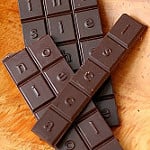 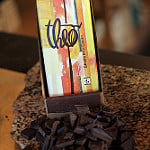 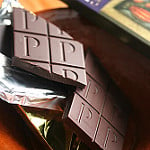 The bean-to-bar chocolate movement not a widely known concept in France. Yes, there are some great chocolate companies, but if ask most people if they know of any of the small producers of chocolate, you’ll likely get a blank stare. There is also a view that American chocolate is all commercial and bad (and some is, and some isn’t), but in the past decade or so, there are nearly two dozen chocolate-makers in America that have been making some interesting bas. So a few choice tables would be of interest if your hosts or friends have open minds about trying some new, handcrafted chocolate. 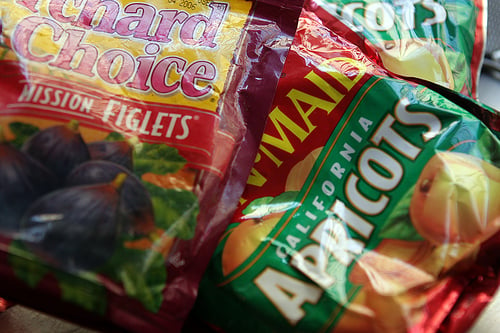 I used to tell people to bring California dried apricots (well, at least to me) because I love how tart and tangy they are in comparison to their sweet Mediterranean counterparts. Then I realized after giving them to some French friends, they were often too-tangy for their tastes.

But the spectrum of dried fruits in America is pretty amazing, and things like dried black figs, blueberries, sour cherries (mentioned above), cranberries, and curiosities like dried pluots are virtually non-existent in France. (Yes, I snuck in “virtually” because although you sometimes can find them, they’re still quite uncommon.) Your local farmer’s market will likely have some, Trader Joe’s, or natural food stores.

It might seem folly to bring American cheese (not the stuff individually wrapped in the supermarket) to France, but a lot of French people will never have the chance to try one because they’re not imported. English cheeses are starting to make inroads in France, but an interesting chèvre from California or a blue cheese would make a nice gift for someone who was open-minded about cheese from outside of France. 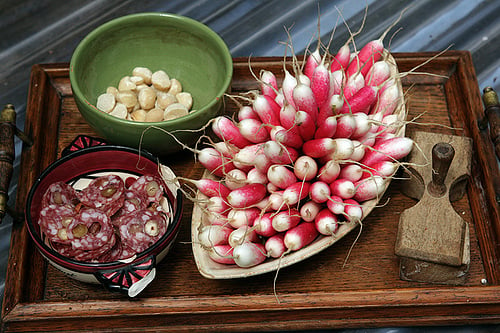 These are one of those curiosities that have sort of taken off in Paris. They’re rare, and pricey in France, and have a certain cachet. The chocolate-covered ones I would stay away from, or the candied ones, as French people don’t seem to be as fond of overly sweetened candied things as some folks in America are. (Which is why if you’re bringing candy corn to Paris, it’d better be for me.) 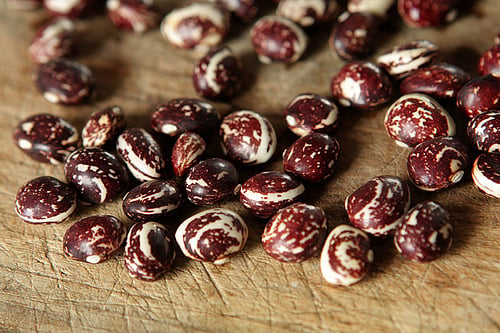 I’ve gifted a bag of these heirloom beans to more French friends than anything else. Dried beans are pretty commonly used and available in France, but most are just the standard varieties. Interesting varieties are the Good Mother Stallard, Christmas limas, Scarlet runner from Rancho Gordo, which are variegated and are unusual. Go to a natural food store for a good selection.

When I moved to France from California, I was always surprised when French people would say to me, “Oh, California. The wine there is very, very good.” I like California wine myself, but I didn’t understand why anyone from France would be praising California wine so highly. Most aren’t easily available here and although a number of people do visit the states, it wasn’t until I asked a French caviste why French people think so highly of California wine. “Most of them have never tasted it. They’re just saying that because they’re heard it’s good” he told me. Am not sure how true that is or not, but varieties that are somewhat unique to America, like Zinfandel (not the white stuff) are interesting. Most other states make wine, too. So perhaps check out some local labels from places closer to home to bring over, instead. French people also like whiskey (whisky), so if you know someone who will appreciate it, that makes a good gift as well.

The French have taken to noix de pecan rather feverishly. However most of the times I’ve bought them, they’re unpleasantly over-the-hill. My guess is that they don’t turn over as quickly as they do in the states, where we bake heavily with them. So a bag of whole pecans is a welcome gesture. 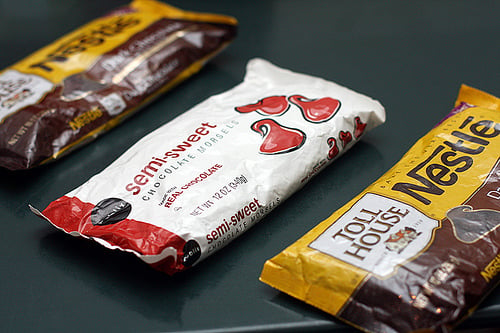 A growing number of desserts in Paris have chocolate chips tumbling out of them, not to mention the classic, les cookies. Yet if you want some to bake them at home, a tiny bag of pépites chocolat containing what looks to be a dozen or so chocolate chips inside, will set you back more euros than one could imagine. Since “Le cookies” have caught on in France, a bag or two or semisweet morsels makes a nice gift and will save someone some major euros.

There are probably a few things I missed. But if any French people have any particular cravings, or what kinds of things you’d like visitors to bring, let us know in the comments. We’ll stock you up.

(And don’t forget to return the favor in l’autre direction!)

10 Things to Bring Back From Your Trip to Paris

Note: When you travel to France, do be sure to check what can and can’t be brought into the country or the European Union. Also be aware that the information can change. You’ll find information at:

–What should I know about French customs? (About.com)