New chocolate-makers are springing up across America, in the most unlikeliest of places. Like Missouri.

Who’d a thunk it? 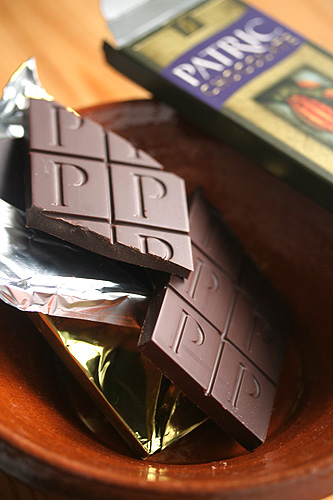 Using good ‘ol American ingenuity, a little over a year ago, Alan McClure started grinding up beans and molding them into lithe bars of very dark, and very sleek, bittersweet chocolate.

His company, Patric chocolate, makes bars that are “micro-produced,” and he’s got two in his line-up, both using cacao from Madagascar.

When I asked Alan what attracted him to the cacao from that region, he said “Since the bars are made from cacao that come from one single estate, and since the family there has owned it for quite some time, they really have been able to exert an extremely high level of control on the quality and consistency of the fermentation and drying, which is actually quite rare in the cacao world.”

Alan proclaims that this isn’t pure “criollo” chocolate, a much-touted term for a varietal that almost all chocolate experts say no longer exists in its pure form. (Some chocolate-makers are claiming to the contrary.) Right now, the all the beans for Patric’s bars are from a plantation in the Sambirano Valley.

Back in Columbia, Missouri, where Patric chocolate is made, a small amount of cocoa butter is added to the 67% bar, which tempers the flavor just a bit, and it’s interesting to taste the two examples side-by-side.

Because they look so similar, after I unwrapped the tablets, I forgot which was which. But after breaking the corner off both of them, I immediately knew which was the 70% bar; it was the one that broke off with a hard, crisp snap, and I tasted that one first. The little triangle melted in my mouth with lush, ripe red fruit at the beginning, lingering with a long roasty finish. The flavors were tannic, but not harsh at all. Someone who really loved complex, dark chocolate as much as I do would love this bar.

Softer and creamier was the 67% tablet. That small amount of cocoa butter released other flavors, namely dried cherries and plum skins. It was far more fruity than the previous bar, which surprised me and was less-intense, but quite good, too.

I continue to be impressed by the imagination and creativity of the new American chocolate makers and they’re well-worth searching out and supporting. I can’t wait to see what comes next out of Patric’s chocolate grinders. Next up for this micro-producer is a higher-percentage Madagascar bar, and a few others things he’s being coy about.

Alan has a very interesting blog, which talks about, and demystifies, the process behind sourcing beans and making chocolate. And he’ll be revealing more of what he’s up to as he grinds along.

How to temper chocolate