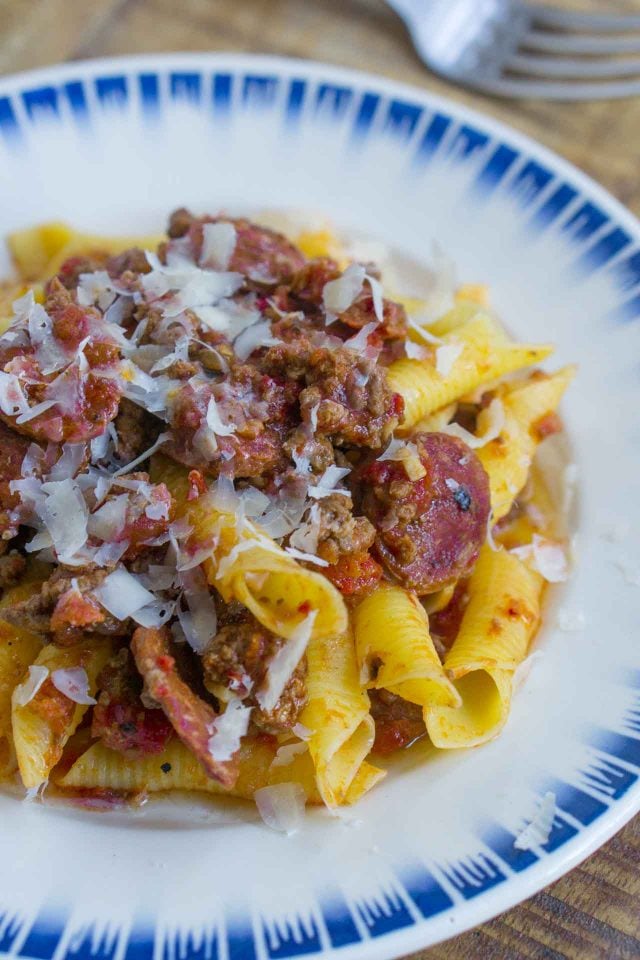 A while back I made Meatballs Subs because I had a craving. They’re not that difficult to make and when you make them at home, you can use better ingredients than the versions you get elsewhere. Fortunately, there’s good bread in France and no shortage of cheese. And meatballs aren’t much of a challenge to make either. (Interestingly, a few weeks after I posted that recipe, an American woman living in Paris came up to me and said, “I don’t know how you knew, but I was craving the exact same thing! So I made your recipe…”

There must be something about ground beef, because I recently found myself craving Pasta Bolognese; tubes of pasta tossed in a thickened tomato sauce made with ground meat, red wine, garlic, and enriched with tomato paste – Capisce? 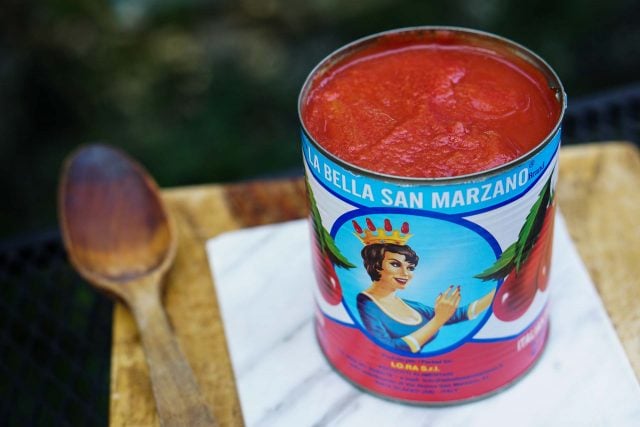 I scanned a few of the cookbooks on my shelf for a recipe. One recipe I’m sure was amazing had thirty ingredients. My friend Adam made the Canal House recipe that takes five hours. Since I’m usually home, I don’t mind the time commitment, and if I spent a few minutes (or hours) rifling through my kitchen cabinets and refrigerator, I could have probably gathered the 30 ingredients on hand for the other recipe. 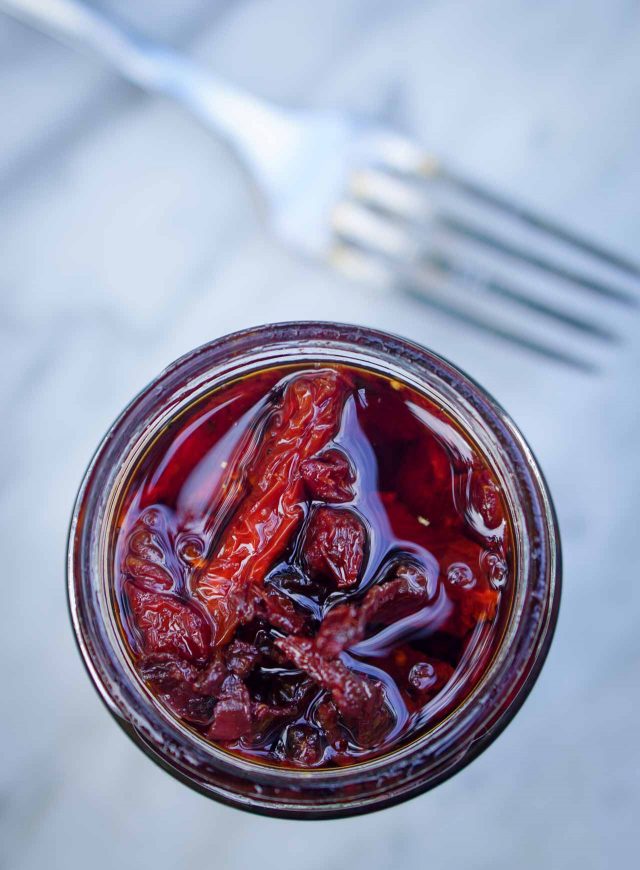 But I didn’t go with either of those Pasta Bolognese recipes, because I got a copy of Food You Love But Different, and there it was: Pasta Bolognese with Chorizo. The recipe practically fell in my lap, and who was I not to make it?

Food You Love But Different by Danielle Oron is a cookbook dedicated to riffs on favorite recipes, but elevated with creative seasonings and multicultural flavors and ingredients. Danielle is famous for her Chocolate Chip Tahini Cookies, and like those cookies, I love how her book takes ordinary dishes in intriguing directions.

There are White Chocolate Coconut Blondies, Shawarma with harissa mayonnaise and pickles, and a Cheeseburger which has you roll out the beef so it’s uber-thin, which you pan-fry so there are lots and lots of crispy edges and surfaces. Once it’s done, you fold the thin patty between two slices of griddled-til-crisp white bread. I don’t know about you, but that sounds really, really good to me. I guess I’ve got my next craving lined up… 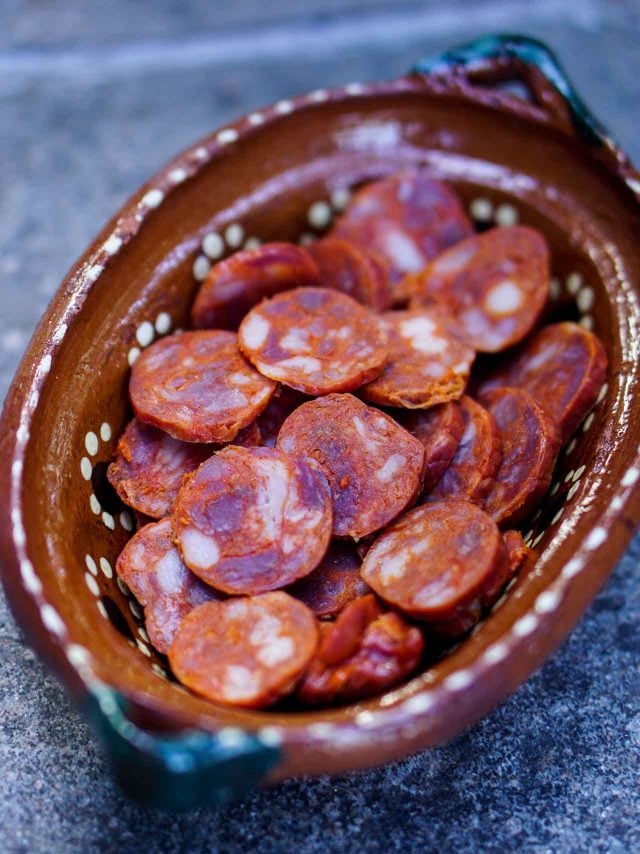 The curveball in this Italian-American Bolognese recipe is that it uses Spanish chorizo, which is different than its Mexican counterpart. Mexican chorizo is usually sold fresh whereas Spanish chorizo is cured sausage, sold in links that are ready to slice ‘n go. I stuck with non-spicy chorizo but you could take it in a livelier direction by using the spicy kind. 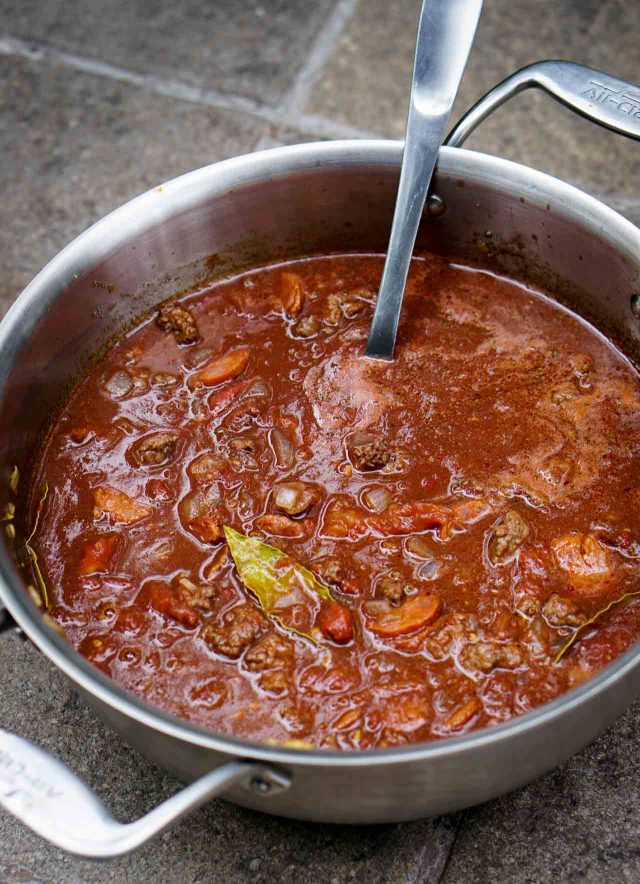 After sautéeing everything on the stovetop in a big pot, the mixture simmers in the oven for a few hours – you don’t even have to stir it. When it’s ready, you’ve got a big pot of warm, richly-thick tomato sauce that gets tossed with warm pasta and served with grated cheese. 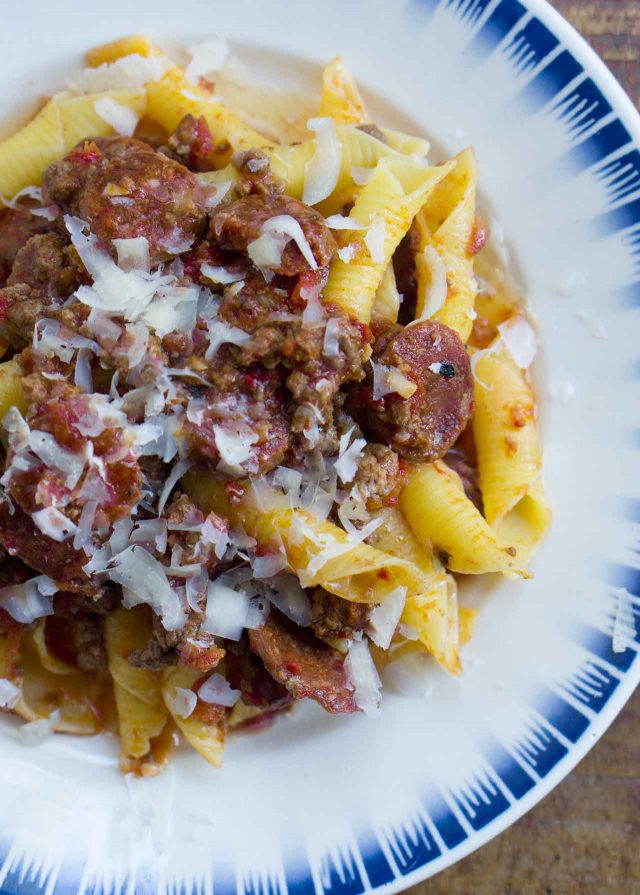 It certainly filled my craving (and then some…as we enjoyed leftovers for several days later), and if you give it a go, I think it’ll fill yours, too. 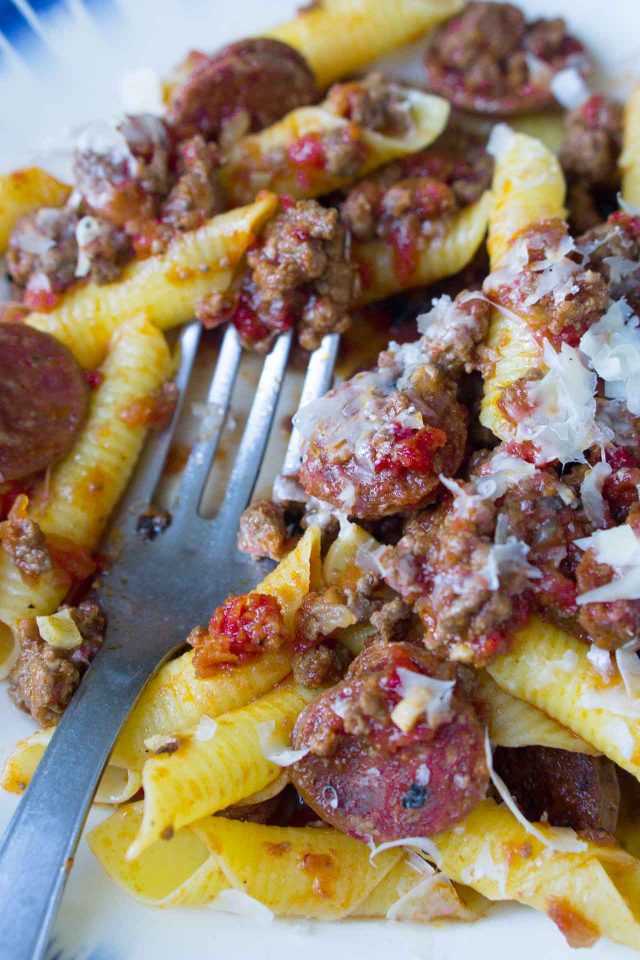 Adapted from Food You Love But Different by Danielle Oron I made a few changes to the original recipe, including reducing the type and amount of red wine, which was rather strong. She uses a full bottle Tempranillo and I went with a fruitier red. I dialed down the amount (and type) of wine because I prefer the livelier punch of Pinot noir and similar red wines, and having a half-bottle of wine leftover was perfect to enjoy with dinner. The first time I made this Pasta Bolognese I used ground beef that was 20% fat, as the recipe indicated. It threw off a lot of oil, which I spooned off the top of the sauce when it was finished. The next time I made it with leaner, grass-fed beef and it came out just fine, although the meat was less-moist. (As grass-fed beef can also be.) The pictures in the post were the second batch; the sauce of the first one, made with non-lean beef clung more to the pasta, due to the higher fat content. Both versions, however, were equally flavorful. (Also my oven didn't go down to 250ºF (120ºC), as indicated by the original recipe, so I cooked it at 275ºF (135ºC), for the time indicated in the recipe here.) To make sun-dried tomato paste, blitz sun-dried tomatoes with a teaspoon or so of the oil they are packed in. If using sun-dried tomatoes not packed in oil, gently warm the tomatoes in olive oil, remove from heat, and let stand overnight to soften. (I actually used the oil in the sun-dried tomato jar for the olive oil in step #2 for sauteeing.) If you don't want to use them, just add another dab of tomato paste. I used doux chorizo, which is sometimes called "sweet" chorizo, but if you want to spice things up, you're welcome to use spicy chorizo. Note that the chorizo used in this recipe isn't fresh (like most Mexican chorizo is), but cured and dried and sold in links that are firm. It often referred to as Spanish chorizo. Lastly, a dash of Asian fish sauce, or even colatura, gives the sauce a little je ne sais quoi. It won't taste fishy, but the sly anchovy flavor will boost the umami factor of the sauce.
2 tablespoons olive oil or the oil from the sun-dried tomato jar
8 ounces (230g) Spanish-style chorizo, thinly sliced
3 cloves garlic, minced
1 large onion, diced
1 1/4 pounds (560g) ground beef (see headnote)
1 teaspoon kosher or salt
freshly ground black pepper
2 1/2 tablespoons tomato paste
2 tablespoons sun-dried tomato paste or puree
1 tablespoon dried oregano
1 1/2 cups (355ml) fruity red wine, such as Pinot noir or Merlot
1 28 ounce (800g) can whole tomatoes, crushed
1 tablespoon sugar
2 bay leaves
1 rind Parmesan (optional)
1-2 teaspoons fish sauce (optional)
1 pound (450g) dried pasta, such as rigatoni, penne, garganelli, or tagliatelle (fresh or dried)
Parmesan or pecorino cheese, for serving
1. Preheat the oven to 275ºF (120ºC).
2. In a large, heavy pot or Dutch oven heat the olive oil. Add the chorizo slices and cook, stirring occasionally, until they're warmed through and releasing their oil. Remove the chorizo with a slotted spoon and add the garlic and onions to the pot. Cook, stirring occasionally, until the onions are wilted and translucent, about 5 to 6 minutes.
3. Add the beef, season lightly with salt and a few good turns of freshly ground black pepper, and cook, stirring, until the meat is cooked through browned, about 5 to 10 minutes. Stir in the tomato paste, sun-dried tomato puree, and oregano. Slowly add the wine, scraping the bottom of the pot to remove any stuck-on browned bits.
4. Stir in the crushed tomatoes, sugar, bay leaves, Parmesan rind (if using), and cooked chorizo. Bring the mixture to a low boil, remove from heat, cover, and braise in the oven for 3 hours. No need to stir while cooking.
5. After three hours, remove the sauce from the oven. Taste (carefully, as the sauce is hot), and season with additional salt and pepper, as well as fish sauce, if desired. Remove the bay leaves and Parmesan rind. Use a tablespoon or turkey baster to skim excessive oil, if any, off the surface of the sauce and discard it.
6. Bring a big pot of salted water to a boil. Cook the pasta until al dente. Reserve 1 cup (250ml) of the pasta water and drain the pasta. Stir the hot pasta into the sauce, adding a little bit of the reserved pasta water to loosen things up, if necessary. Serve in bowls with Parmesan or Pecorino cheese alongside for guests to grate over each serving.

Another serving suggestion: The original recipe advised to serve it with a bottle of Tabasco sauce on the table, so people can season and spice up their own pasta.

Notes: Perhaps a number of you would use a slow cooker or Instant Pot for a sauce like this. I haven't had the best of luck using my slow cooker for anything but rice, and don't have an Instant Pot. But if you make it in either of those machines, feel free to share in the comments how you did it.

This makes enough sauce for six to eight servings of pasta. You can freeze half of the sauce and make it with 8 ounces (225g) of pasta. The sauce will keep for at least two months in the freezer, or up to five days in the refrigerator. 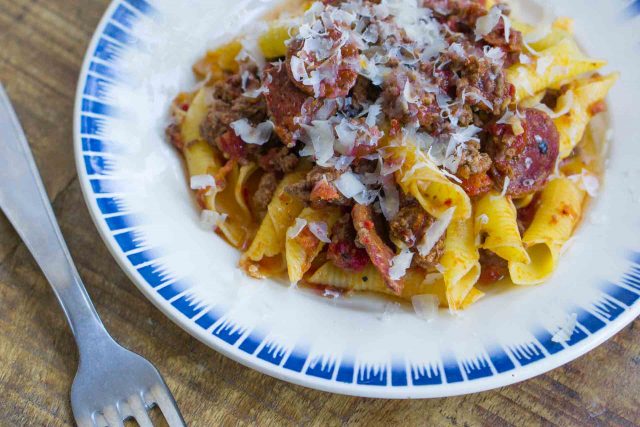