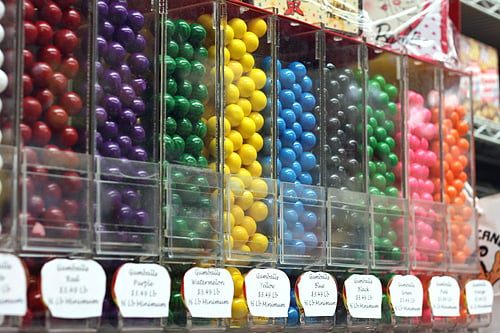 I’ll spare you any quips about feeling like kids in a candy store, but from the squeals of delight all around us (and there was no one under eighteen in Economy Candy), there we were, a roomful of adults, surrounded by floor-to-ceiling displays of candy—from the new to the long-forgotten. And I could hear every few moments someone saying, “Oh my God!” or “I LOVE these!” from people reconnecting with their favorite sweets from the past. 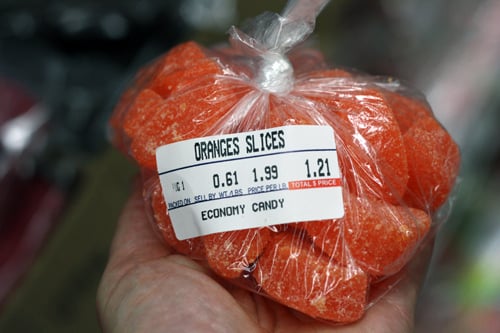 My favorite candies of all time are Orange Slices, jellied wedges of orange coated with tooth-crackling sugar crystals. Man, I could eat a jumbo bag of them. I also like Dots, but you have to be careful if eating them at the movies because if you don’t hold each one up to the screen and check before you pop it in your mouth, you might accidentally eat one of the green ones. 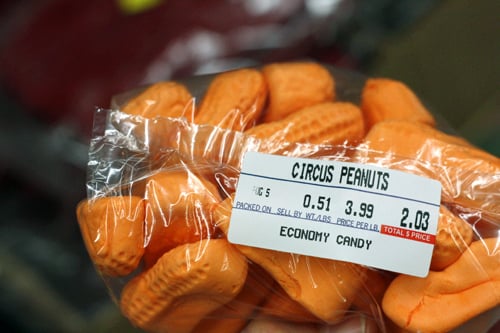 But what’s up with stocking Circus Peanuts, but not Toasted Coconut Marshmallows? I mean, Circus Peanuts have that dingy, dull orange color and the texture of marshmallows unearthed from the back of your grandmother’s pantry where long-unused items are exiled. Whereas Toasted Coconut Marshmallows are tender, puffy, light-as-a-poof square of marshmallow rolled in sweet, toasted coconut. And there’s even a princess on the package serving them forth on a tray, in case you need a reminder about how special they are.

(Oddly, I couldn’t find a picture of that packaging, but I am sure I am not making that up. Please tell me I’m not delusional.) 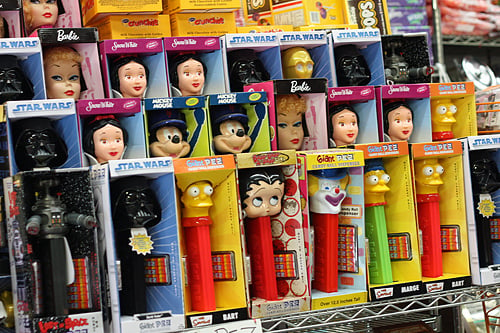 Pez was never a big favorite candy of mine, although the dispensers continue to excite. I liked pulling them open, then letting them snap back on my finger. Repeatedly. So am not sure what to make of these giant Pez dispensers, about ten times to size of the pocket version. Do I put my whole hand in? What’s the deal? So I passed. Plus I imagined the looks I’d get in Paris if I pulled out a life-sized Bart Simpson Pez dispenser. As every Frenchman knows, the likeness of any Simpson character belongs on your socks, not as a candy dispenser. Don’t be silly. 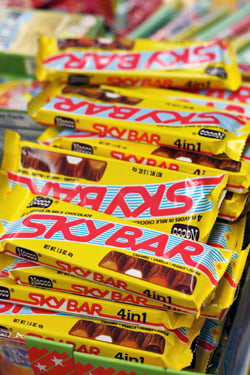 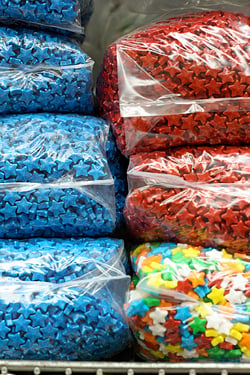 There’s Sky Bars, which I always wanted to try as a kid, but they seemed too luxurious to me with their sumptuous four separate compartments of flavors. (Although I think I remember five. Am I imagining that, too?) Oddly, the only time in my life I’ve ever had one was when I scored one during a particularly fruitful Halloween. That year is also famous because I got a full-size Mounds bar, much to the consternation of my sister, who didn’t. And not one of those “Fun-sized” ones. (What silly marketing team came up with a candy bar that was smaller, and put it in the “Fun” category?) I guess I could’ve kicked a lifelong inferiority complex and splurged for a Sky Bar from the mounds of them at Economy Candy, now that I’m all grown up and stuff. But old habits die hard. 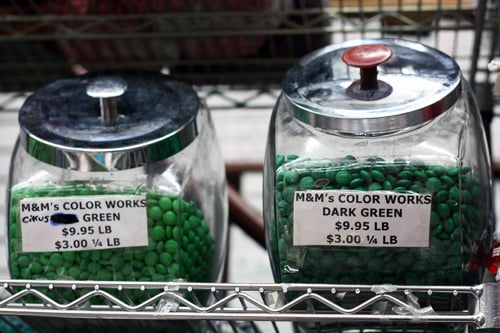 For those of you with “issues”, like those involving colored M&M’s, you can pick and choose whatever colors you like here. For example, blue just doesn’t do it for me. Sorry, but it’s not a color readily found in nature (only blueberries, blue jays, and carnations at certain ethnic restaurants). Since you asked, I’m partial to light brown, red, dark brown, and sometimes the green ones. And that’s for plain. For peanut, I prefer yellow and green, sometimes red, always dark brown, and not really the light brown ones. Unless it’s July or October. Or I’m in the southern hemisphere.

As for peanut butter, pretzel, and coconut M&M’s, I’ll save those for another post. Or my next therapy session. 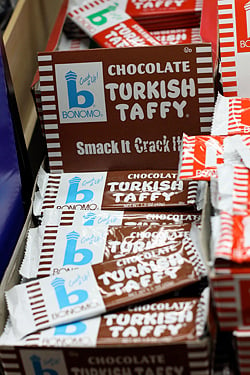 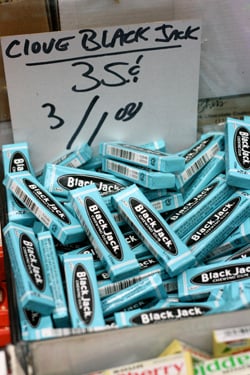 I always thought that I was an international kind of guy, but who knew that taffy was as equally adept as I was at crossing borders? 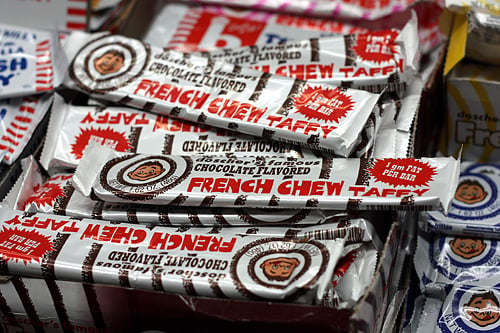 And who knew there was taffy in France? They’ve been holding out on me all these years. Sheesh. And the French aren’t the only ones who make goofy candy. What’s up with gum that tastes like cloves, and one named after a weapon? That’s pretty crazy stuff, too, if you ask me.