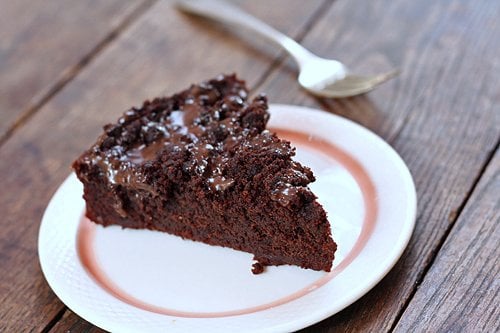 The first place I had on my list of places to go in New York City was Erin McKenna’s Bakery NYC. Ever since I saw the video of the staff having a blast, I was transfixed on going there to participate in the fun and frolic. 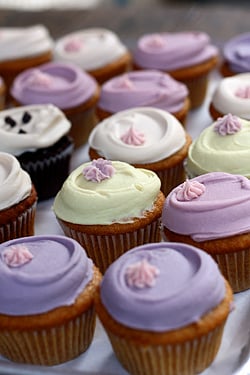 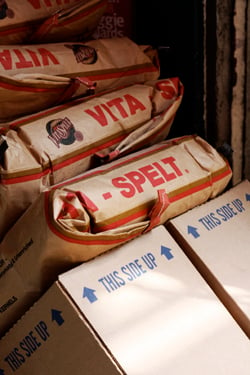 The bakery is owned by Erin McKenna, and features vegan desserts made without gluten or refined sugar. There’s also treats for people who keep kosher, and those on soy, egg, and casein-free regimes. Not all desserts fit into those categories, but for people on various diets, this place is a godsend. When a few people I mentioned it to said to me, “Gluten-free? No sugar? Is the stuff any good?” 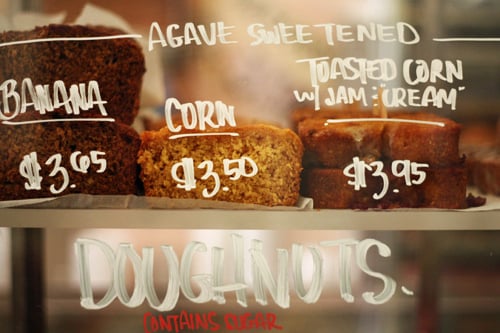 If you’re wrinkling your nose, if Salted Butter Caramel Doughnuts dripping with caramel syrup and Chocolate Cake, moist from sweet agave nectar don’t sound appealing to you (like they do to me), then fine. More for the rest of us. 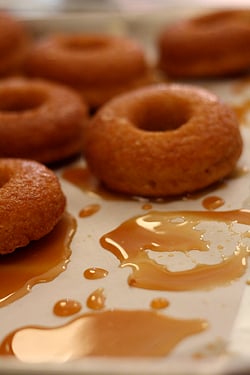 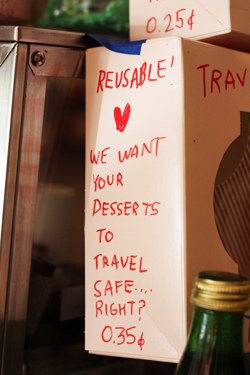 I wasn’t planning on spending a few hours at Erin’s bakery the morning I went. But because I have zero sense of direction, I got a little spun around in those confusing streets of the lower East side. The temperatures were soaring that morning and I figured when I finally hit the East River, it was probably time to turn around. (After wandering aimlessly a bit, I figured there was no way I was supposed to swim the final few blocks.) Silly me had written down the wrong street. And when I finally found the bakery, I pulled up a stool at the counter and decided not to leave, ever. 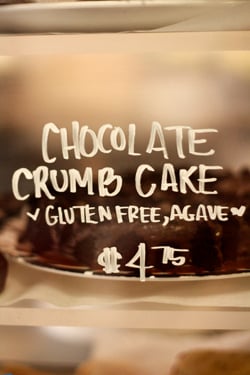 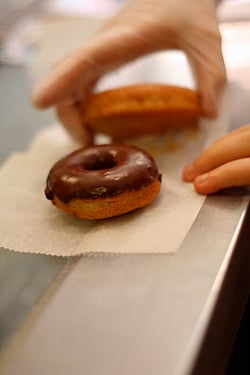 Of course, the giant iced coffee I had in my hand didn’t exactly make me want to exit. But my friend Carrie and I tried lots of things on the extensive menu. And I got to meet Erin McKenna, who worked at Chez Panisse after I left. 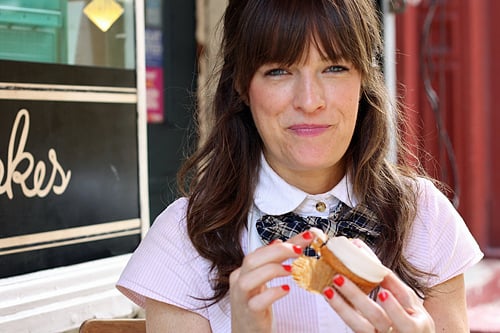 You won’t get any lectures here from the snazzy staff about your health (thank goodness), or how or what to eat, because you don’t need to. The proof is in the pudding. Or more specifically, in the large assortment of cupcakes and doughnuts on display. 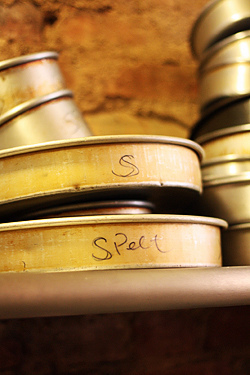 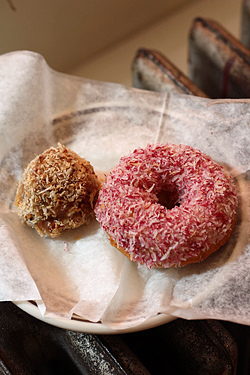 All the ingredients are organic and it’s encouraging to taste such wonderful home-style cakes and cookies made from ingredients that aren’t normally associated with traditional baking. While I ate plenty, I didn’t feel bad or guilty after gorging myself. Of course, sweetener is sweetener, chocolate is chocolate, and although I like coconut oil fine, I think I’m not ready to replace French butter as my baking fat of choice quite yet. 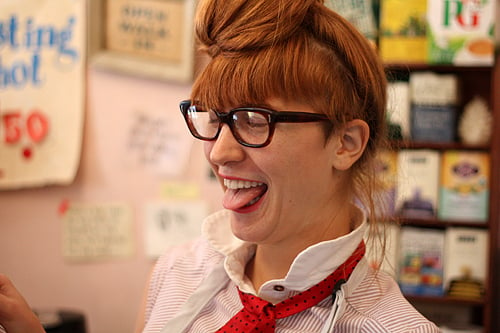 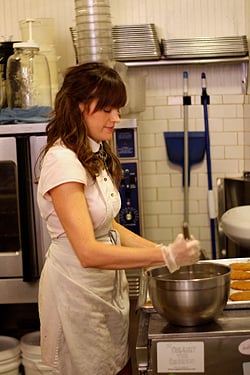 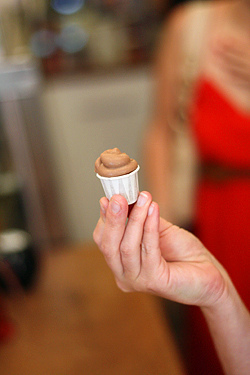 For those in need of a “quick fix”, one can stop in and get an Icing Shot of your favorite flavor of frosting.

Erin McKenna’s Bakery is also part of what makes New York City such a great food city. There’s seemingly room for all kinds of food in and around Manhattan, and people are taking things just seriously enough to tout the origins of ingredients and are happy to show the care they’re taking with them. 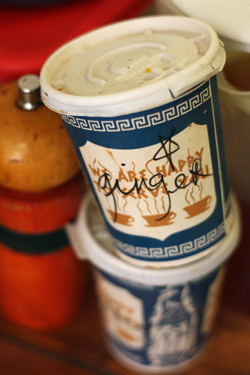 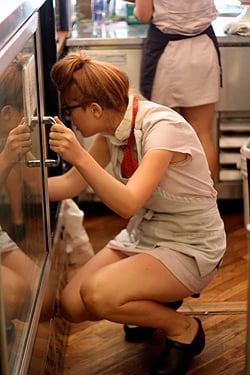 I saw this everywhere, from the fantastic Union Square Greenmarket, as well as the smaller satellite farmer’s markets that spring up around the city, to burger joints like Shake Shack, which takes pride in their ingredients and how they’re prepared, even through they grill thousands of burgers, and fry bucketloads of crisp fries daily. It’s proof that it can be done. 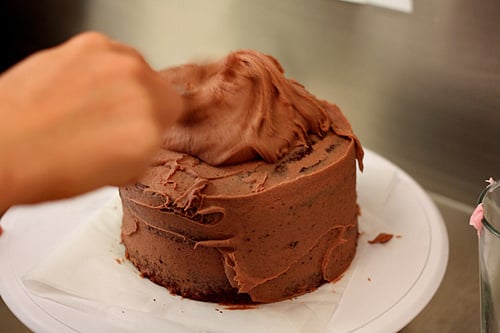 When I take a forkful of chocolate cake, as I mentioned in the introduction to Ready for Dessert, I want it to have “…that screaming intensity of chocolate.” The agave-sweetened version here did. In fact, if you were in New York City on a recent Tuesday morning at around 10:24 am and heard an odd, rather loud noise, it was probably me. 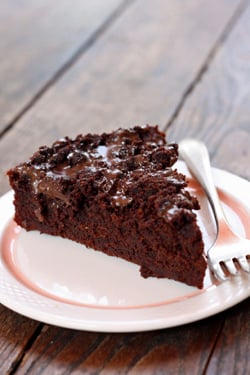 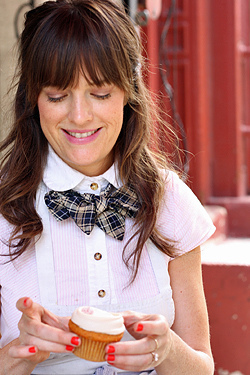 Trends come and go, and I heard more grousing about cupcakes when I was in New York, the same way Parisian macarons have come into fashion. For the record, I still have a fondness for cupcakes, especially if they’re moist and cakey, with that sugary icing that crunches a little when you bite through the fine crust that’s formed on top. Although I did see everything from cupcake trucks, to stands on the streets, selling the bite-sized cakes, I didn’t indulge because of all the too-bright frostings piled high.

(Wonder if anyone is going to set up a macaron truck in Paris? Somehow, I think it’d shock more than excite. But who knows?)

Or maybe because I live outside the United States and cupcakes haven’t invaded Paris too much, and they’re considered a novelty, that I’m not overdosed on them. So when I come back to the states, it’s fun to have one and scrape the crinkled cupcake wrapper clean with my teeth. When they’re made with wholesome ingredients, like these, I find them equally appealing. 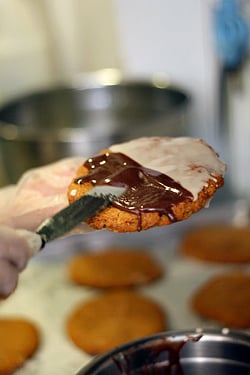 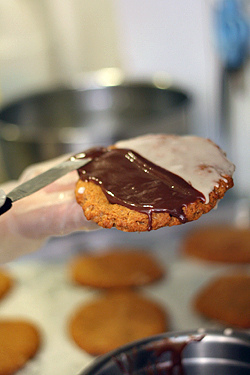 And, of course, it wouldn’t be a New York City bakery if they didn’t have Black & White cookies. At least not in my book. Now that I figured out how to get to the bakery the first time, I just need to figure out how to get back. Or maybe Erin will consider coming to Paris, and opening a bakery here. Or maybe she can roam the streets in a truck, handing out cupcakes and Black & White cookies. And perhaps a few macarons, while she’s at it. 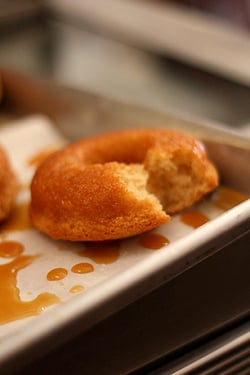 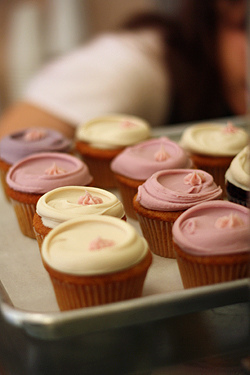