A lot of people love to travel. I am not quite one of them. Sure I love wandering through exotic markets, exploring restaurants in new cities, and sitting under an umbrella on the beach. But the hard part for me to deal with is getting there. I know that travel used to be romantic and fun, but it’s not anymore. And people like the woman sitting across the aisle from me who just couldn’t believe that her enormous suitcase won’t fit in the overhead bin just above her seat and was refusing to put it elsewhere, and hassling the flight attendant about it, doesn’t add to the allure. 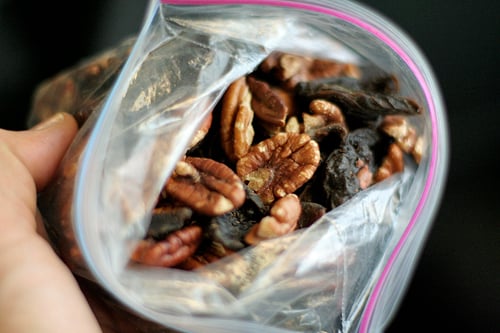 The main thing I don’t like about travel is this: I don’t like being uncomfortable. I don’t like being trapped in a plane, unable to move (even when seated), I never sleep well unless I’m in my own bed, and call me crazy, but I like the option of going to the bathroom when I need to go to the bathroom. I’d make a horrible prisoner. And after fifteen minutes trapped in my seat, one can only read about electric butter slicers, portable water washers, and the latest in nose-hair removal technology so many times in the Sky Mall catalog.

What makes travel much more enjoyable are taking French trains. Lightening-fast, the TGV trains run on schedule, are clean and spacious, and if you buy them at the right time, you can snag first-class tickets that are pas trop cher. But even the regular train cars are pretty great. But as a friend once said to me; “I don’t do drugs, so I figure I can use that money to go first-class on the train.”

As I’ve learned, though, France is a country of great highs, and an occasional low. When the French do something right, it’s wonderful. But sometimes the results are decidedly different. If you want to see an excellent example, compare the Opéra Garnier with the Opéra Bastille, and you’ll see what I mean.

French cuisine a source of national pride and I would guess that when you mention the words “French cuisine” to anyone, no matter where they are in the world, the image of wonderful meals and fine dining comes to mind. 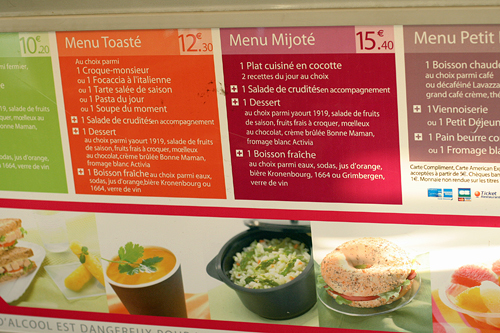 So why is the food on the French trains so regrettable? It’s one of the very few times that French people don’t get so excited about tucking in a meal. I try to avoid the food at all costs, but because I love hanging out in the café car, I’ll sometimes have a coffee, and on my last trip I ordered a café noir for myself and a noisette (a café express with a bit of milk) for Romain.

I had my hopes up when they were advertising that the coffee they were using was Lavazza. And while I watched her unwrap the packaging from each individually-wrapped hard-plastic disposable capsule, I figured if there was going to be all that ecological waste, at least something decent might come of it. Namely, a decent cup of coffee. 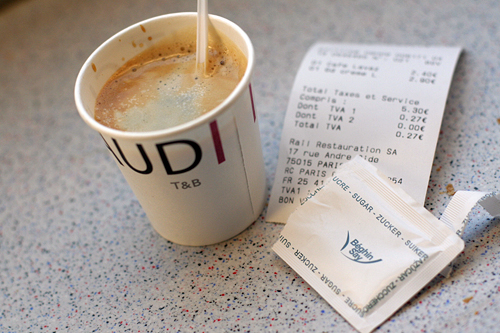 Instead, I do believe that this was the worst cup of coffee I’ve ever had in my life. I’d say it was tasteless, except for the rank, tastebud-torturing flavor of what could only be described, as the French do, as eau de chausettes—sock water.

Wisely, Romain took a bit of milk in his coffee, since that can soften the effects of bitter coffee. But when she handed him a large cup full of hot, sterilized milk, make beige by a teaspoonful of the dreaded brew, he handed it back to her and told her it wasn’t a noisette, which she agreed—but shrugged it off. (Next time you’re in France, try returning your coffee and you’ll see why I hide behind Romain when he does that.)

I won’t even bore you with stories about the food, but let’s just say I didn’t think it was possible to mess up a simple sandwich, which they manage to do. I mean, how hard it is to slice a fresh baguette in half, smear it with butter and add a few slices of jambon de paysanne or Comté? It’s not like a good baguette and terrific cheese are all that hard to come by around here. 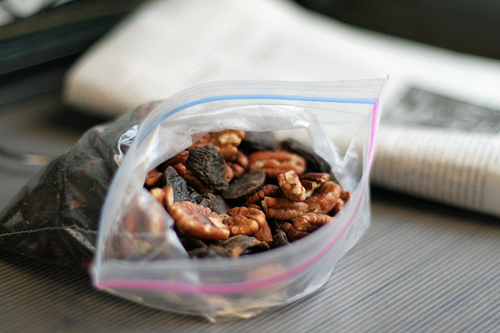 So like many French people, I never get on a train without bringing food with me. Sometimes it’ll be a simple sandwich, but once I was preparing for a voyage with a group of people from the states and we were shopping, putting together a grand pic-nique. When I added a few bottles of wine, they ask me; “Can you drink wine on the train?”

“C’est obligatoire!” I responded, loading a few bottles of Touraine rouge and a corkscrew into my basket.

Still, sometimes the trip may not merit a full meal. So I call this my French Train Mix and I refuse to get on a train without it. My idea of hell is to be trapped on a TGV train and being forced to order something from the café car.

But I substitute “plane” for “train”, and always pack a bag of this American-style trail mix along with me on trips. (I’m not so familiar with train food in other countries, but I think when it comes to airlines, the country of origin doesn’t matter.) Mine’s usually a mix of dried cherries and snipped apricots, disks of dark chocolate, and plenty of crisp, well-toasted nuts, and jumbled together. I’d add peanut M&M’s, but I’d probably end up picking those out and only eating them instead of the healthy stuff, so I think it’s wise not to use them.

On this journey, we had the best sandwiches ever: smoked ham, wedges of pungent chèvre, sliced cornichons leftover from a not-entirely-successful baking experiment, and a generous coating of tapenade verte slathered on both sides of a poppy seed baguette from my favorite secret bakery in Paris that I can’t tell anyone about since the place is, as the French would say; un peu triste, or, a little sad. Which actually means it’s kind of depressing. And truly, from the cracked Formica walls to the bare-bulb light bathing the place in a grimy-yellow hue that would make a 1940’s mental institution seem cheery in comparison. (But oh, those baguettes!…)

Speaking of depressing, they’re about to serve us lunch on the flight I’m on right now. And from the look (and smell) of things coming down the aisle, I’m really thankful we brought those sandwiches along, although due to some silly rules, we couldn’t bring along any libations. And I know we’ll be dipping into my American Plane Mix a lot during the next few hours. But I’m not sharing any with the woman across the aisle from me. She’s been hassling the flight attendants about everything, and I’m sure if they had their way, they’d place her in front of the open door 40,000 feet up here and give her a push.

As someone who’s worked in the hospitality business, I know there’s one golden rule that should never be broken: Don’t f-ck with people serving you food.

Years ago I worked with a woman who was a flight attendant with Pan Am for something like twenty-five years before becoming a baker. And hoo-boy…the stories that girl had! One in particular that stuck in my mind involved a special dressing for a pilot’s salad that a male flight attendant prepared en privée for a, particularly homophobic pilot.

Which is probably another reason that I bring my own along. Even though I always make an extra effort to be nice to folks working on planes, I’m afraid they might mix up 16E with 16F, and I wouldn’t want to eat whatever they’re planning on serving her.