The TGV Lyria train makes the trip to Switzerland is just about three hours. If you buy your tickets in advance, first-class seats aren’t that much more expensive than regular fares (sometimes the difference is little as €5) and as a friend said to me, “Since I don’t use drugs, I spend the extra money on first-class train tickets.” 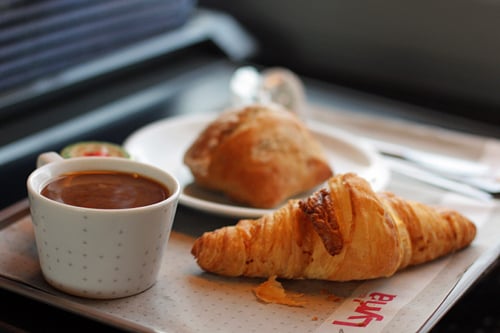 Lest you think first-class is elitist, I often go second-class. The good thing about first is that the seats have electric outlets, which is great for getting work done. As in, all the 119 pictures you saw on the Swiss posts I processed on the train ride home. Plus there isn’t the usual “seating scrum” that happens in second class trains in France where it’s not surprising to board the train and find someone in your reserved seat. Then the process is you go sit in another seat. And when that person comes, they go find another seat. I always want to say, “Why doesn’t everyone sit where they are supposed to sit?” But Romain tells me, “C’est comme ça. You don’t understand.” And you know what? He’s right.

Aside from having a seat with an electric outlet, and even better—no one in it—when I looked at my ticket it said “Meal Included.”

Expecting to be tossed a roll in a plastic bag and a paper cup of acrid coffee that was probably sitting on the burner all night, I was pleasantly surprised on our way to Switzerland when the attendants came rolling down the aisle with a meal cart, pre-arranged in Switzerland, and set a beautiful breakfast tray in front of every passenger.

I was about to eat my words, thinking, “Wow, this isn’t bad. Maybe I was wrong about the food on French trains. I should go back and update that post.”

On the way back from my trip, the train pulled into the station and the passengers unloaded. Because it was late (which I’m not sure was the fault of the Swiss, whose trains are so accurate they apologize if they’re thirty seconds late), we scrambled to get on. There was trash everywhere and the train was a mess. My traveling companion, who makes frequents trips around the world, from India to Romania – and even to the wilds of New York City – described it as “squalid.”

But at least we got a meal. 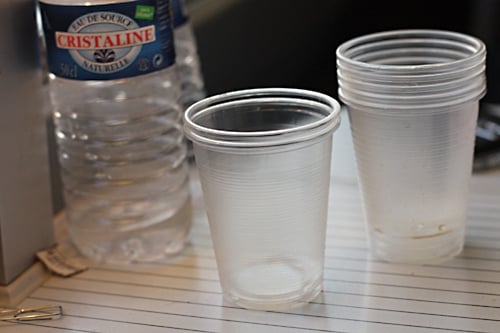