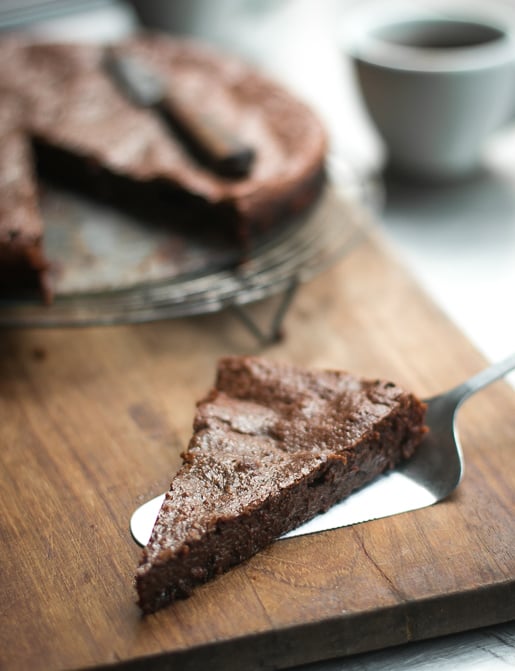 The French do a lot of baked goods very well. if you’ve been to Paris, you don’t need me to tell you that with over 1300 bakeries in Paris, it’s not hard to find a pastry or baked good on every block that will be more satisfying than you can imagine.

One of the rare baked goods that the French haven’t quite mastered are les brownies. If you see them in bakeries and try one, you’ll find they’re often on the pas humid side. I’m not sure why, because they’re simple to make, and don’t require any special techniques: You just stir everything together, scrape the batter into a pan, and bake them. The only astuce (cooking tip) is that it’s important to watch them like a hawk, taking them out of the oven at the point where they’re still going to be soft and crémeux à l’intérieur. 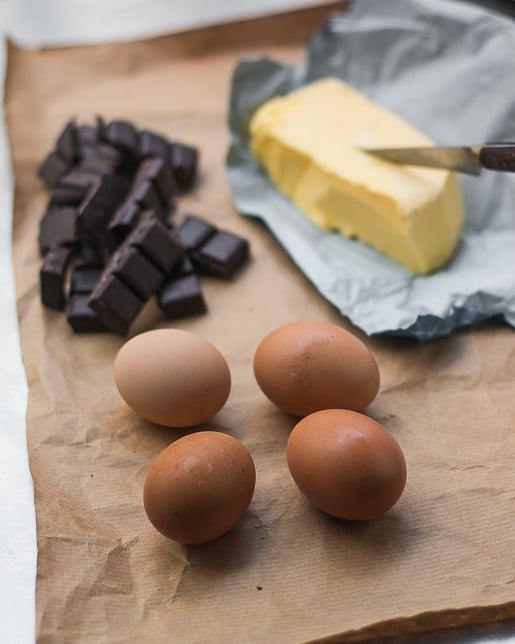 In August, we were visiting some friends who live on an organic farm in the Poitou-Charentes, and after dinner, Hélène, presented us with a large tart-like creation that looked like a big, flat chocolate cake that she’d baked up in between her other chores. I was told they were les brownies, but hers were different. In addition to a little bit of coconut that was added, which gave them a slightly elusive tropical flavor, they were moist and uber-chocolaty. I couldn’t keep myself away from them. 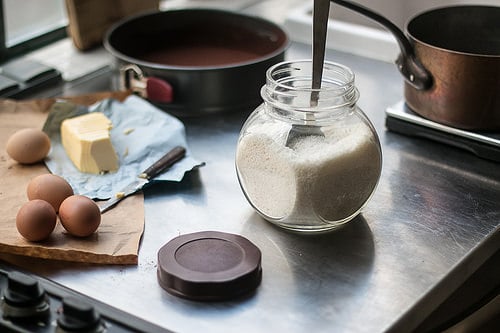 The French don’t usually snack with the same fervor that Americans do (Romain’s father was once shocked to learn that I ate between meals), but I spend a good part of my day picking at any and all desserts that are within arm’s reach. And when everyone else was out in the fields down on the farm, weeding and working on hedges, I stayed back in the house, reading in a comfy chair — and found myself circling back around and around the pan of brownies, cutting off une lichette (a sliver), to help myself. 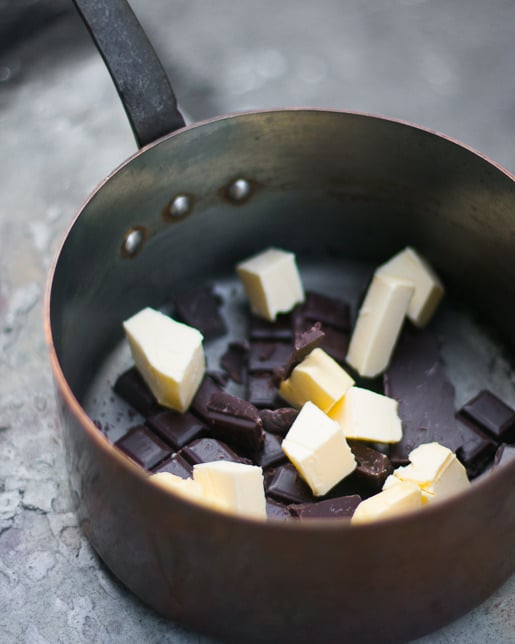 Now I can make them at home, where no one’s watching me, and I don’t need to feel guilty about not participating in the weeding. (Not that I did when I was there. But still…) I tinkered a bit with the recipe, and mine came out even richer and moister than I could have imagined, although I stuck with her idea of baking them in a round pan rather than a traditional square one.

Many French baking recipes don’t specify pan sizes, which confounds most Americans. The original recipe just said to pour the batter “dans un moule,” which I’m used to, and just assumed it was an 8- or 9-inch pan (20-23cm.) But I was confounded by the words “chocolate à cuire,” which means “cooking chocolate.” In America, that would be unsweetened chocolate (which we sometimes call “baking chocolate,” which isn’t widely used in France for home baking. And it’s very rare to find it in grocery stores. So I thought it unusual for a recipe to call for that. 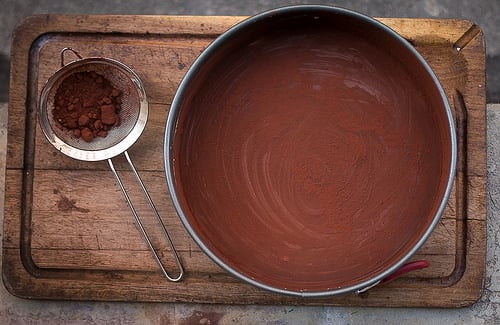 Turns out it just means “chocolate that you bake with,” another reason why translating things directly isn’t always the best policy. Thanks to some French bakers on Twitter, and Hélène, I got the right chocolate, and dug into my generous stash of bittersweet chocolate that I always have on hand. (Which isn’t immune to my greedy hands either.)

The other thing I got right was that, sure enough, these brownies were ripe for the picking, and I spent the better part of a few days cutting off lichettes of brownies to snack on. So just a warning if you make these; you’ll probably find yourself doing the same thing, too. 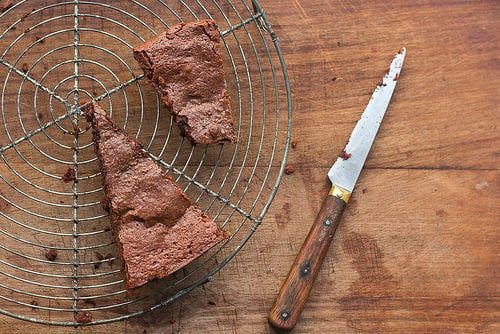 Hélène told me that because she’s from Brittany, she uses salted butter, because in Brittany the butter is usually salted — even for baking. You could replace the water with coffee or espresso for ramped-up brownies, if you’d like a little extra buzz in there. The original recipe called for adding almond flour, so if you don’t like coconut, you can use that. I couldn’t resist adding a handful of chocolate chips, and feel free to add some nuts if you’d like.

Storage: The brownies can be frozen for up to two months, if well wrapped. Because they are quite moist, they’re somewhat fragile so pack them carefully if you freeze them. Note: Unsweetened desiccated coconut, sometimes called shredded coconut, is often available at natural food stores, or online. You can also use flaked or shredded dried coconut, grinding it a bit in a food processor or blender before adding it to the batter.