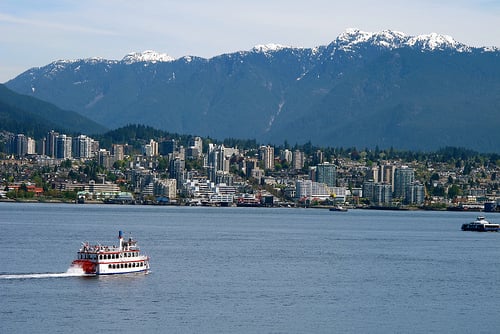 A while back I was discussing something with a Canadian friend in Paris. Until – at one point, she stopped the discussion and said, “Y’know, I’m Canadian. I don’t have an opinion.” And while that may be true, before touching down in Vancouver, I decided to give crowd-sourcing where I should go for dinner another go, since I knew almost nothing about where to go in Vancouver. The only thing I knew was that it was known to have especially great Asian food. And it seemed a shame not to indulge in some of it. 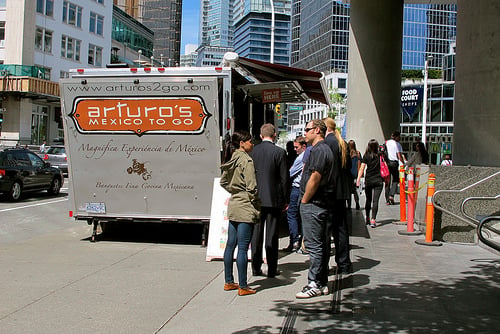 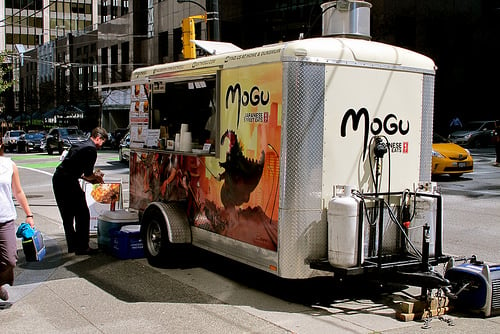 Since my plane was coming near the tail end of the dinner hour, and I had to be up-and-at-‘em early the next morning, I needed somewhere to go that was near to my hotel. After a day of flying, I wasn’t up for wandering around an unfamiliar city in my dazed stupor. And since I only have the barest minimum of free time, I needed to use it wisely – and make sure I didn’t eat any meals that were duds. 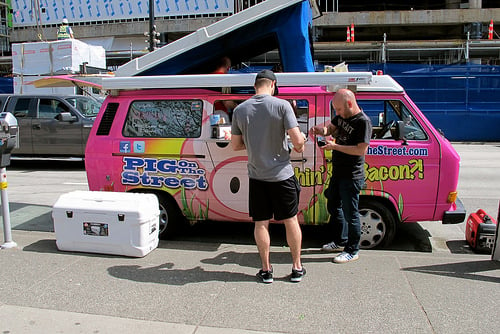 For an opinion-free culture, folks on Twitter sure had plenty to say about where to go, although many were eliminated since “near” was the operative word. I also learned that apologizing for everything was another trait Canadians were known for. And as we were lining up to exit the plane and race toward the border patrol area, which is usually a scrum elsewhere, I heard plenty of people apologizing and saying “Oh, I’m sorry” to each other. And letting them pass. 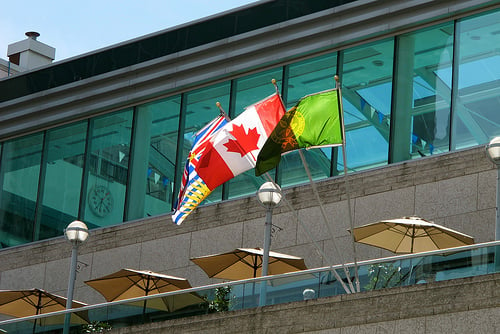 On the food front, a few places kept popping up repeatedly, and looking at a map once I landed, and talking to the nice folks at my hotel, I saw thatShuraku was just a five minute walk away from where I was staying. So that was the deciding factor.

I tend to shy away from “modern” Asian, since I’ve seen so many Asian cuisines brutalized, but – wow! – the first course of cherry tomato kimchi changed my opinion, pronto. A tall, footed glass came out filled to the brim with cherry tomatoes that had been peeled and partially cooked, just enough to soften them to a silky texture. The slippery little devils were floating in a fiery red sauce with edamame and seaweed -honestly, it was one of the most curious, and spot-on-the-mark things that I’d ever tasted.

Not wanting to miss a drop, I was tempted to pick up the glass when all was said and done, but the very nice waitress – and “nice” seemed to be the operative word in Vancouver – told me it’d probably taste too salty. So I stuck to sipping my little carafe of sake on ice, which is something you almost never get in Paris – even at Japanese restaurants. And if they do have it on the menu, it’s painfully expensive. So folks stick to beer.

I didn’t take any pictures so you’ll have to trust me that the rest of the meal was excellent, including a spicy mayo spider roll with soft-shell crab, and warm yam tempura rolls. Hoo-boy, was I glad I made a beeline it over to this restaurant as soon as I landed. And to the five or six locals online who recommended it, I’m sorry. I mean – thanks. 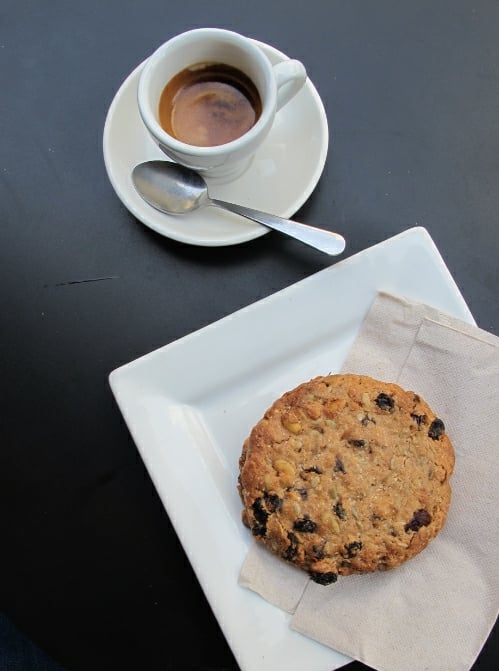 It was confirmed how kind people in Vancouver are when, the next afternoon, between appearances on my book tour, I took a break at Trees coffee to dial up my vitality with a vegan “power” cookie and a double espresso. Spotting an empty table on the sidewalk with my treats, I went to sit at it, which seemed to cause some uncomfortable shuffling from the fellows behind me. Slipping out of my Parisian mindset, I asked if someone was sitting there. They apologized profusely and said that yes, someone was. And, they were sorry,…but did I mind? 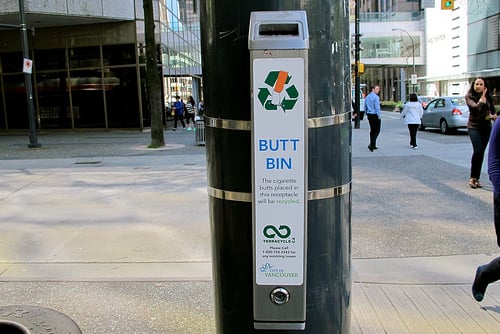 Because I was visiting another continent, if not another planet, I offered to move and they thanked me for moving. In Vancouver, even the smokers are respectful, and all that I saw were kind enough to stand out of other people’s way. So they could smoke in peace, and others could eat and walk, and breath in the clean air. Plus the city is kind enough to recycle the mégots (hello, Paris?…) Vancouver is a very eco-friendly city; there are recycling bins everywhere, and, if they could, I’m sure the parking ticket machines apologize to the sun for borrowing some of its energy to power them. 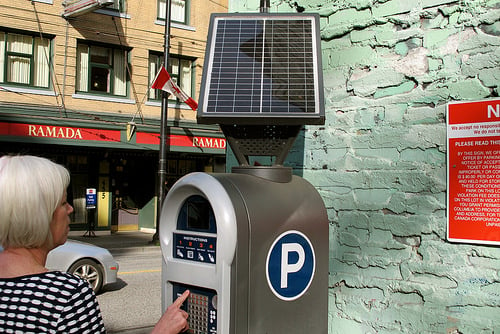 My days and evenings were ridiculously packed, as book tours are supposed to be. But in the free moments that I had in Vancouver, I hoofed around town on foot, passing a gazillion food trucks offering everything from Mexican food, to Asian fusion. 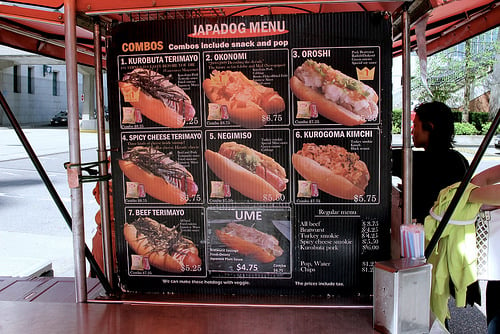 Like “modern”, the word “fusion” on menus and restaurant signs scares me. But here in Vancouver, where Asian food is integrated into the culture, it seemed natural that people would want to take it in various directions. And they do it right. 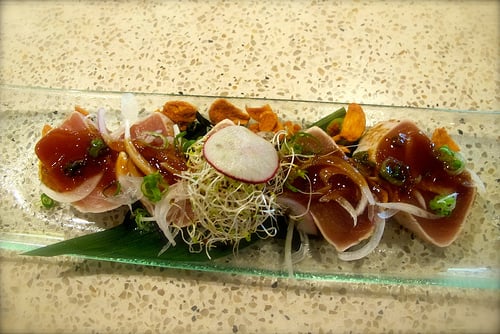 I experienced that same brilliance that I did at Shuraku, at Hapa Izakaya, which no one at my hotel had ever heard of. Which they apologized for, of course. But I found it pretty easily on my own, and pulled up a seat at the sleek bar for a quick lunch. 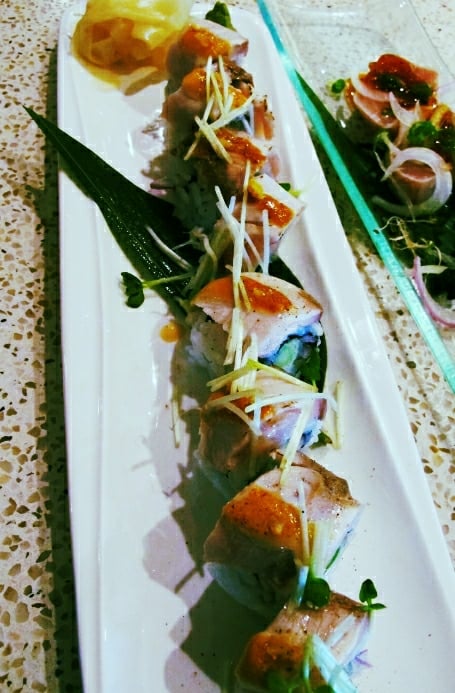 Even though I was pressed for time and on a highly charged schedule, the menu bowled me over since I wanted everything. And in addition to not having a lot of time, the bane of traveling solo is that there’s no one to share dishes with you. (Some locals kindly offered to join me, but I couldn’t plan in advance where I was going, or what time I would be there, or had to be back.) After gorging myself on sushi and other Asian fare the previous evening, I dialed it down just a bit (although the night before, my check for four different dishes, plus small carafe of sake was only $40), and asked the very friendly woman tending the bar what to order.

She suggested the yellowtail and another tuna dish that was on the menu. And since it’s a rare treat for me to eat fresh, raw tuna (all the seafood here is sustainably raised), each bite was savored as if it was a precious, rare gem that would never pass my lips again. The fish that was long-forgotten to me was so good, I thought I was going to cry. 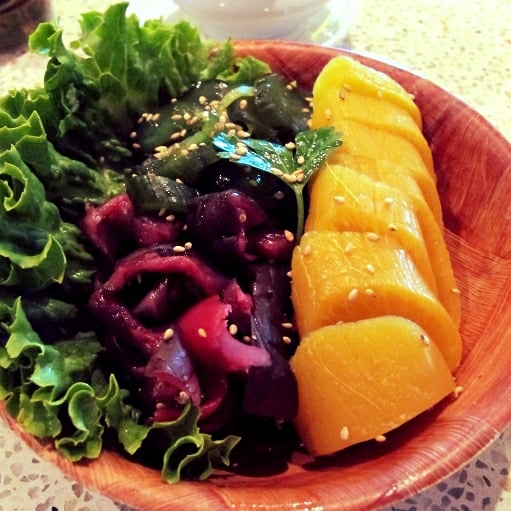 Being a big lover of anything pickled, I ordered oshinko, an overly generous bowl of pickled turnips, cucumbers, and another crunchy vegetable whose name escapes me – and operating on four to five hours of sleep a night, I’m sure you can understand why my brain was taking a leave from reality. (It may be Shibazuke.) I also had big bamboo pitcher of sake which never seemed to be empty (even though it was only 250ml, or about one cup), and I left Hapa Izakaya, I’m (not) sorry to say, a very happy man.

That afternoon I gave a talk and demo at the great Barbara Jo’s Books for Cooks in Vancouver, one of the many marvelous cookbook stores that I’m getting to visit on this trip. During my signing afterward, another one of those very nice Vancouver people, told me that she worked at a great doughnut shop, one that used only all-natural, organic, and fresh ingredients. 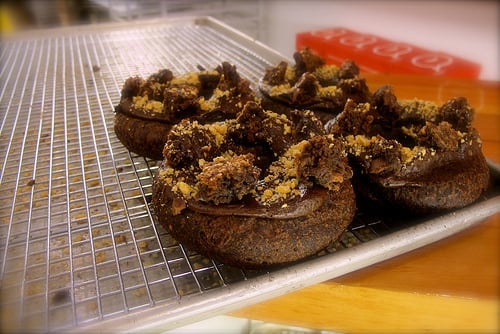 While I wasn’t exactly craving a doughnut when I finished up at 5:15pm, and needed to be back in the shop at 7pm for the big dinner I was hosting, the kindly escort from my publisher in Canada told me that she’d be happy to take me to Cartems Donuterie – even though she had worked at a doughnut shop in her younger days, the midnight to 8am shift. And, understandably, doughnuts weren’t really her thing. 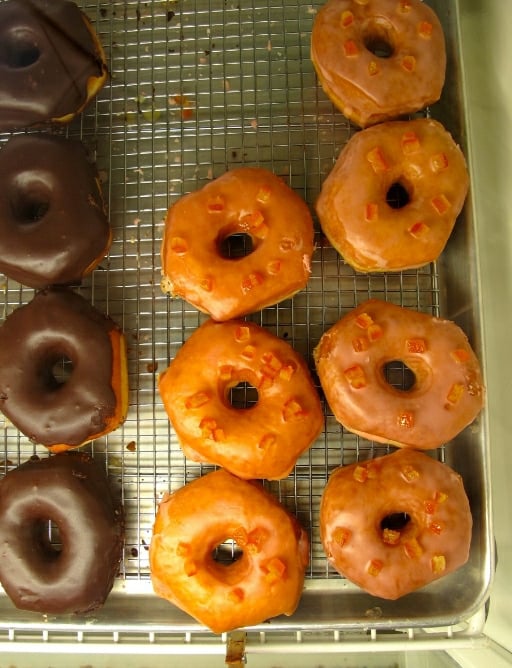 After apologizing for dragging her along, we gazed at the glazed, crazed, and dazed doughnuts, featuring everything from doughnuts flavored with Parmesan & honey, to brûléed hoops of fried dough, and rings coated with everything from candied blood orange to crisp tidbits of bacon. 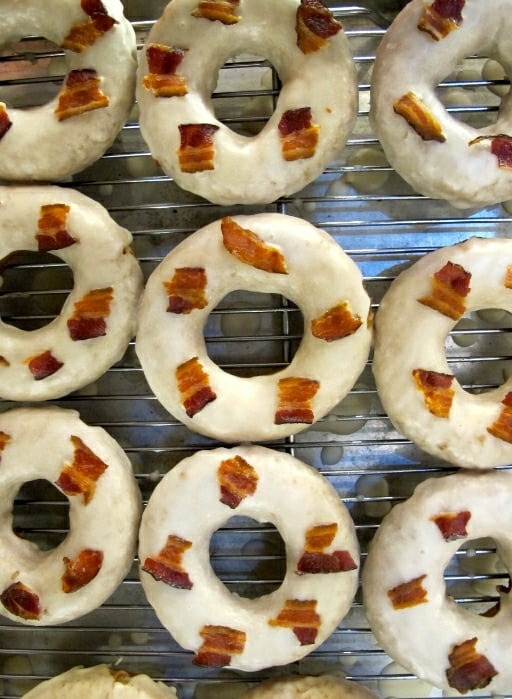 Neither of us, I’m sorry to say, were very hungry, but there was another orange doughnut that was dusted with a scattering of intensely flavored dried citrus peel, according to the chef (who also smokes his own walnuts for another doughnut), which we somehow devoured in a flash. And the bacon number, imbibed with Canadian rye whiskey then glazed with bacon fat, had somehow called out to us as well. And that went quickly, too.

To be honest, I’ve been eating bacon daily since hotel breakfasts seem to feature that – or at least the selections that I’m drawn to (although the granola with spent grains from a local beer maker at the Alexis Hotel in Seattle was outstanding.) But this afternoon, bacon (again) it was, and we didn’t need to apologize for our choice. I could imagine this doughnut being perfect in the morning with a cup of dark coffee. And a strong constitution. And sturdy arteries. 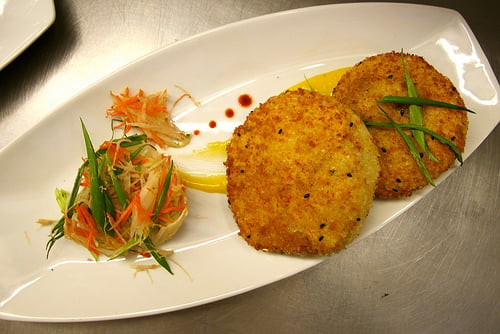 There were also savory doughnuts, in the Asian tradition, called Kare pan, to cover all the bases. (So there would be no need to apologize to anyone for only having sweet doughnuts, I suppose?)

At the risk of disappointing the “should’ves”, in the end, I didn’t get to go to any of the food trucks or carts in Vancouver. I was only half-joking to folks, who were kind enough to bring me gifts on my tour, that my little carry-on suitcase was so packed that the only place I could carry anything else was in my stomach. And that was threatening to burst as well. 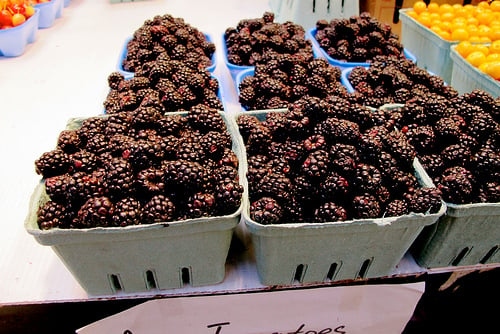 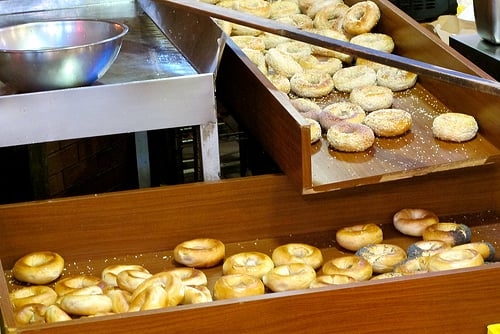 Fortunately the last day, a journalist who was meeting up with me rustled up that Canadian kindness to arrange our interview at the Granville Island Public Market, as she knew my time was pressed, which offered a terrific mix of everything, from tropical produce and fresh local berries, to pastries and charcuterie made from bison and elk. 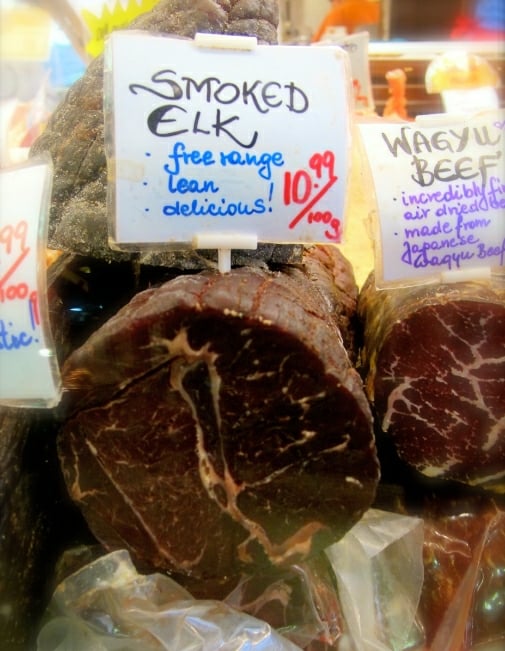 I was happy not to have that same old argument about which bagels are better, the excellent, delicious ones from New York, or the floppy Canadian ones, which both sides have pointed out are the “true” bagel. To which I point out that there are probably a number of people in Eastern Europe (or somewhere close by) that would have something to say about that. And hopefully, whoever they were, put salt in theirs. 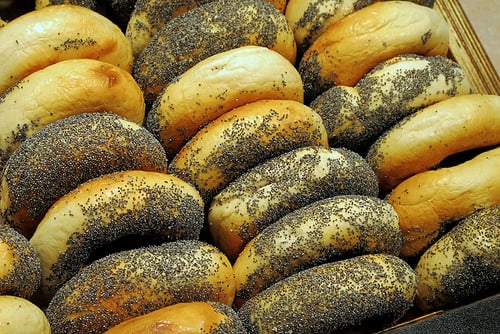 Although these looked pretty good, and I’d be the first to say that I was sorry if I had tried one and enjoyed it. 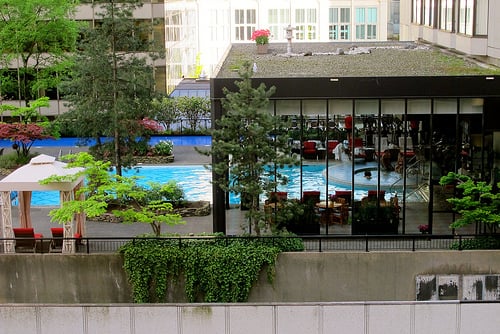 (However, on a side note, I was also not happy to find that my hotel room overlooked a health club, which made me feel like a slug, because – God love ‘em – people were in there working out, starting as early as 4am. And yes, that’s when I was up every day.) 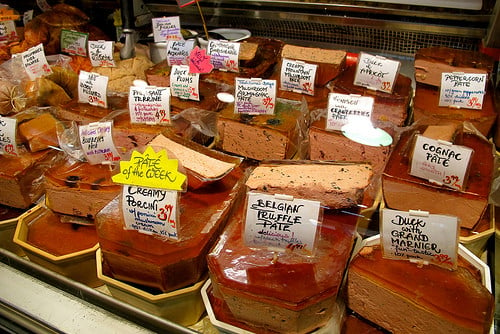 Holy mère of pâtés! – even in France, I’ve never seen so many rich, shiny topped pâtés in a showcase, in my life. (On a tangentially related note, in the twisted way that I eventually get around to what I’m really trying to say _ which you’re probably used to, I was surprised to see bilingual stop signs, whereas in France, all the stop signs say STOP rather than ARRÊT.) 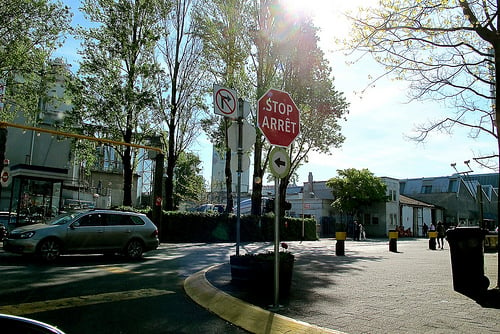 And then, all-too-quickly, it was to the airport, my only souvenirs being some great meals under my belt (which moved over a notch), and a few boxes of locally made chocolates collected in advance by my friend Pam Williams of Ecole Chocolat, who was back in Paris while I was in her lovely city. As my plane took off, I had hoped she was eating as well as I was in the lovely city of Vancouver. But if not, I’m sorry. 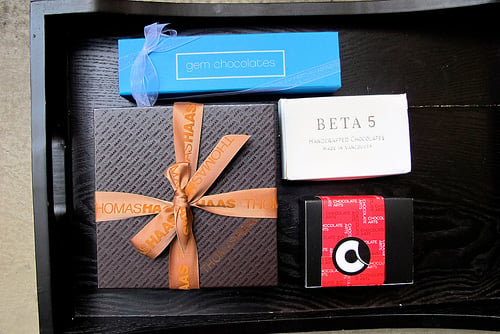