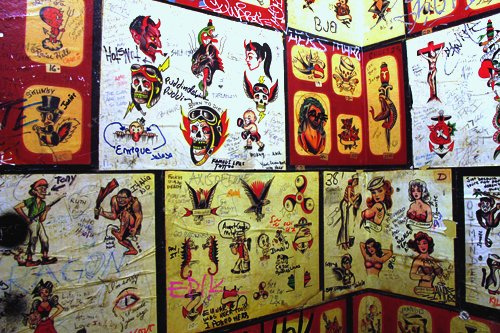 Kuma’s isn’t the easiest place to get to. It’s in Chicago but not anywhere near the city center. And once you get out there, you’ll have to wait for your table. And waiting at (or near) the bar is exquisite torture because there’s a line up of folks at the bar chowing down on the best hamburgers and macaroni and cheese you’ll ever come across. 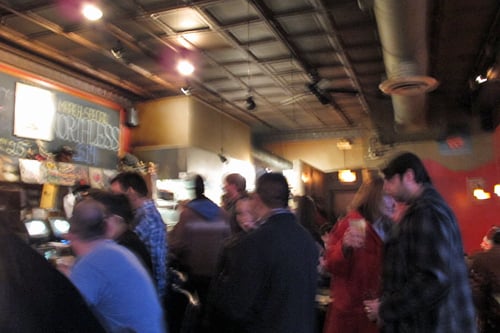 While in Chicago, my daily dining options have come down to this: Mexican, or burgers.

I was very fortunate because when we got to Kuma’s, we didn’t have to wait as long as the few hours that sometimes is necessary since the place is so popular. Even so, a sturdy Jack Daniel’s on the rocks made my wait a little easier. But truly it was hard to see everyone eating around us while I sipped my little glass of whiskey and wait for a table to open up. 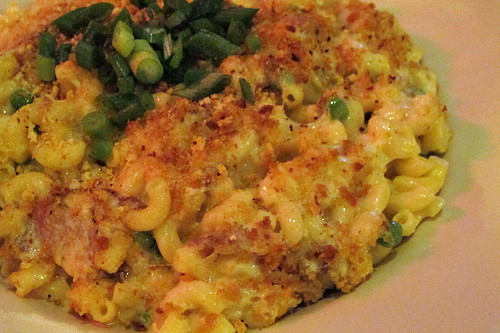 When the magic moment arrived and we slid into our table, the waitress handed us menus with a long list of burgers, plus a list of ingredients to customize your mac and cheese. Because once you see both on the other tables, you’d be a fool not to order both. We knew we were in for a lot of meat and carbs, so it was decided that in addition to smoked bacon, we’d get peas with our macaroni and cheese. (None of those new-fangled sun-dried tomatoes for us.)

It turns out that was a good call and we dove into the enormous mound of pasta elbows cooked in soft, rich, creamy cheese with a dusting of crusty bread crumbs and scallions on top like it was a drug, digging our spoons in repeatedly, unable to stop – even though we knew what was coming up next. 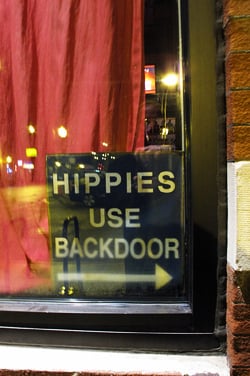 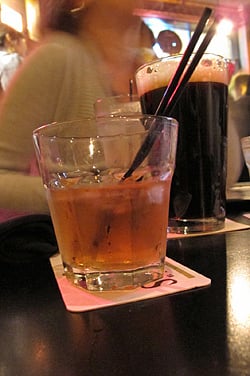 I had made up my mind and was all set to order the Mastodon, a hamburger stacked with bbq sauce, melting cheddar cheese, bacon, and “frizzled” onions on a pretzel roll, but did my usual last-moment switch. (I have an odd habit of making up my mind definitively, then when it comes time to take my order, I invariably switch everything at the last possible second.) But really, when my friends were getting recommendations from our amazing waitress, I heard the two magic words tumble out of her mouth – “Patty Melt” – and changed my order to Solace, a 10-ounce burger served with caramelized onions with bacon and Gruyère on toasted rye bread. 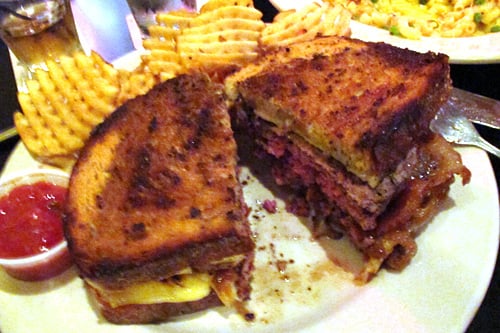 The picture (or pictures) here didn’t come out so well, but I also have a few excuses.

1) It was pretty dark in there, and 2) My hands were otherwise occupied, grasping the burger because it was one of those kinds of burgers that a) You can’t put down or it will fall apart, and b) It was so good I couldn’t stop eating it.

I’ve had chips. And I’ve had waffle-cut fries. But whatever they’re doing to their waffle-fries at Kuma’s, it makes them impossible to stop eating. And another thing I don’t understand is how they seem to regenerate on their plate. I swear, I ate as many as I could. But when I looked down, the pile next to my hamburger seemed to be getting bigger and bigger.

(As an aside, to most normal people, bathrooms aren’t the highlight of a restaurant – and the men who eat here need to work on their aim – but it’s a must to stop to see all the artwork and graffiti on the walls.) 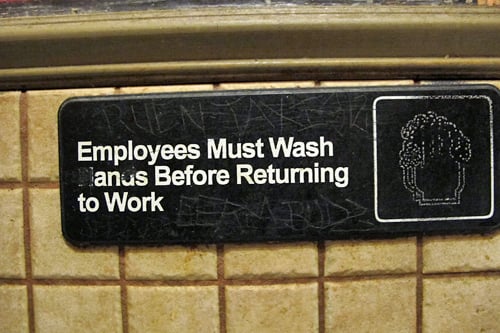 According to their website, “Death to Miller and Budweiser… they are over-produced and inferior products that prevent passionate craftsmen from sharing their gifts with all of us.” They get no arguments from me regarding supporting the little guys (and local pals) so expect a lengthy list of interesting beers on tap or by the bottle. 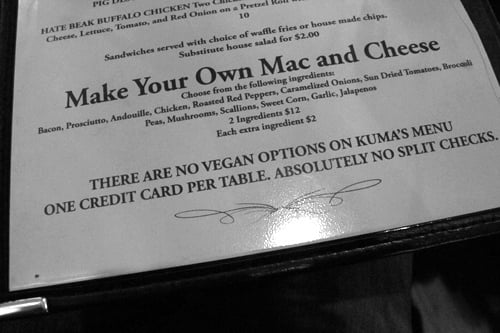 When I ordered another Jack on the rocks, the waitress suggested that I might want to sip one of the whiskeys on tap. I don’t recall what it was, but it was mighty tasty. 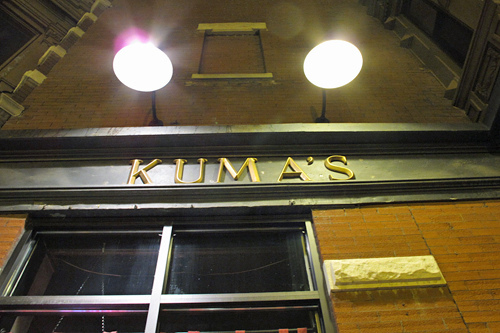 We tumbled out of the restaurant into the frosty night air of Chicago, bits of freezing rain and snow mingling as they pelted us on the sidewalk. In my head, I was vowing that I would never to eat again, as in, for the rest of my life. However when I woke up today, over my bowl of lowfat granola and plain yogurt, I couldn’t stop thinking about the waffle fries and my patty melt—and I just may need to go back

(Kuma’s does not take reservations.)