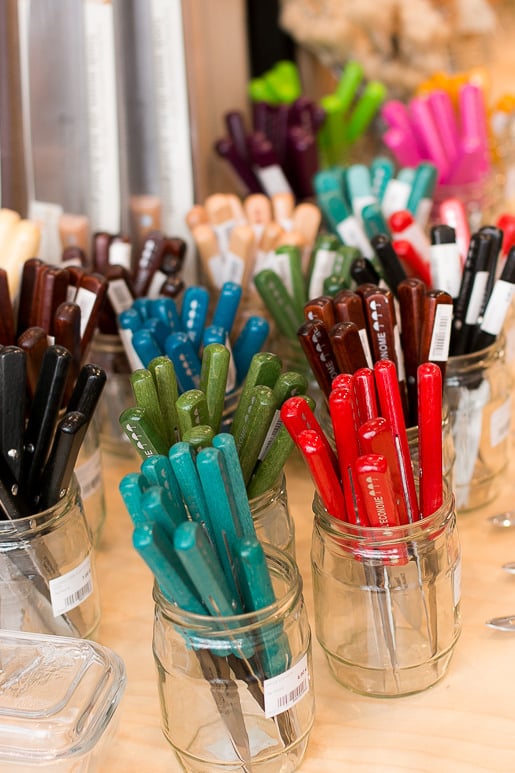 The word trésorerie in French means “treasury.” But in spite of its vaguely unpleasant connotation with the place that receives your taxes, it can also mean “treasure trove,” such as in this case, to describe La Trésorerie. 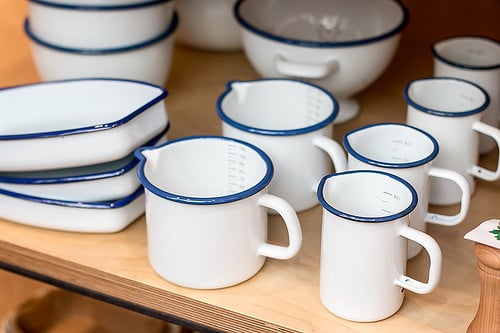 One of the nice things about living in an international city like Paris, is that you can visit “another country” by just taking a métro, bike, or a short walk, and find yourself in the middle of another culture. Behind the Gare du Nord are streets lined with Indian and Sri Lankan restaurants and épiceries (food shops), and the Goutte d’Or has a few lively markets, such as the one at Barbès, that caters to the African community.

Although it’s shrinking, you can have a taste of the Middle East on the rue des Rosiers in the Marais, or head to the 13ème for dim sum, and other Asian dishes. Just by the Opéra Garnier, you’ll often find me on the rue Saint-Anne eating ramen or okonomiyaki, a sort of grilled, savory Japanese pancake. (Good Korean food is still missing, though, and I suspect the spiciness will keep it from becoming more prevalent in Paris.) 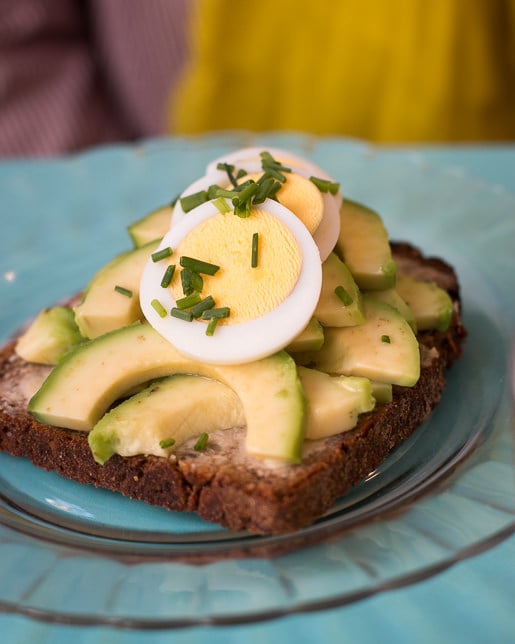 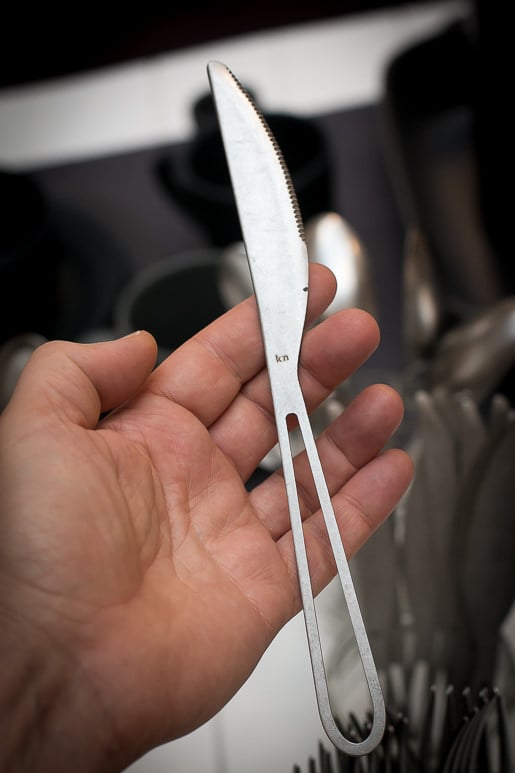 Scandinavia has gotten a lot of press lately, especially the “new Nordic cuisine,” which is fine and all. But even though it’s the opposite of Korean food, at least in terms of spiciness, it’s not especially well-represented in Paris either. (And no, Ikea doesn’t count.) But as a longtime San Franciscan, I remember – and perhaps some of you do too – the Scandinavian Deli and food shop on Market Street in San Francisco that is really a relic from the past.

It was authentic and fun, a great place for a platter of meatballs or a ridiculously cheap meat-filled sandwich that the stern owner sliced himself. The red building with the huge sign (and the quaint Finnish sauna across the street, that become a hugely popular record store, which is now closed) were parts of San Francisco that disappeared in one of the many waves of gentrification that eventually brought coffee shops, gyms, and sunglass boutiques to the neighborhoods, in a sea of non-offensive beige and gray buildings. 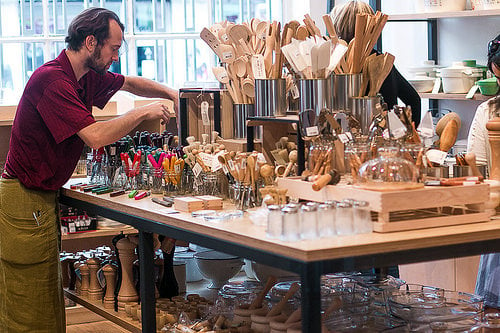 Of course, that’s happening in Paris, too. But it’s nice to see it not happening so quickly. (The current economy may have something to do with it.) While La Trésorerie is, indeed, surrounded by tax offices and social security bureaus, you won’t find any brusque bureaucrats in this light-filled bâtiment. Instead, you’ll find a super-friendly staff, which highlights the best of young French talent; energetic, engaged, helpful, happy to explain their stock, and best of all, welcomed me to take pictures when I asked. 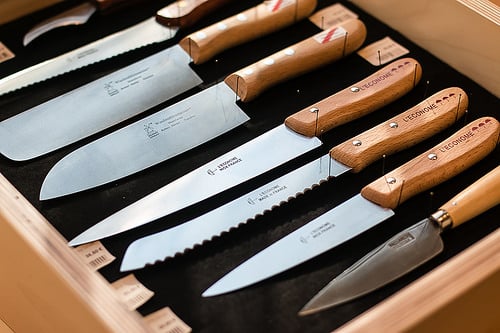 Unlike another place, on the other side of the Place de la République, that’s world-renowned for their housewares department (and lofty prices), everything at La Trésorerie are things that are utilitarian. Meaning things that you will actually use — and can afford. 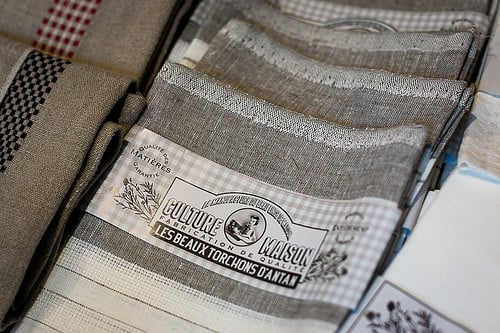 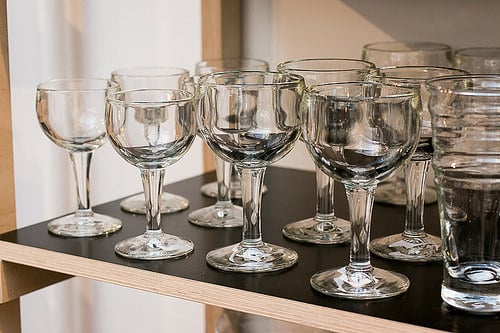 I was with my friend Jane, from La Cuisine cooking school, and we admired pretty much everything in the store. (Including the service.) I was enamored by their beautiful collection of kitchen knifes. Not fancy ones that you’ll have to spend your life worrying about, but ones you’ll actually feel fine about using every day. 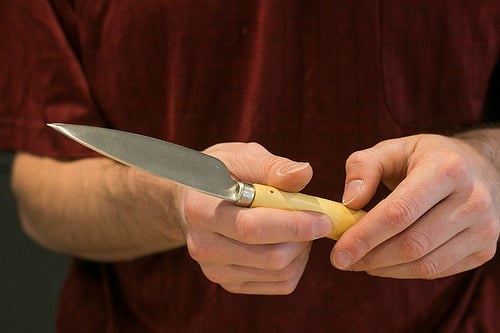 Classic French Sabatier knives, Spanish Pallarès knives, and a wonderful collection of cutlery for the table were offered at remarkably reasonable prices. (Most forks and knives were under €5 each.) 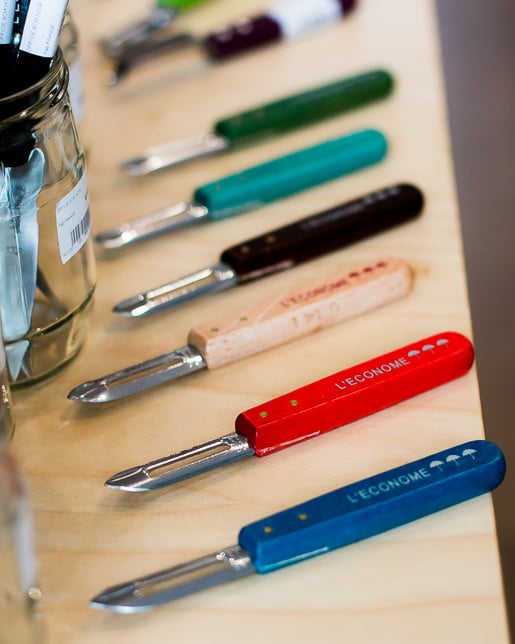 There are stacks of linens for the kitchen at around €13 a piece, as well as larger tablecloths. 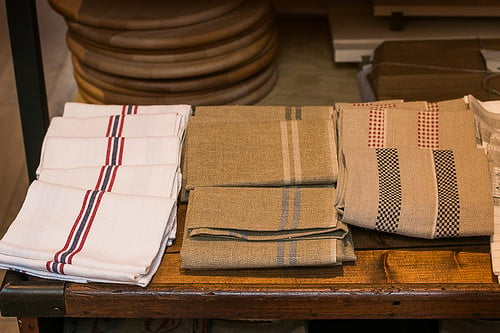 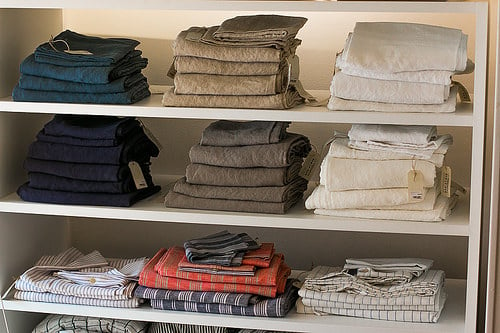 And upstairs is simple linen bedding, which is remarkably hard to find at reasonable prices in France. (Unless you scour the flea markets, like I do.) 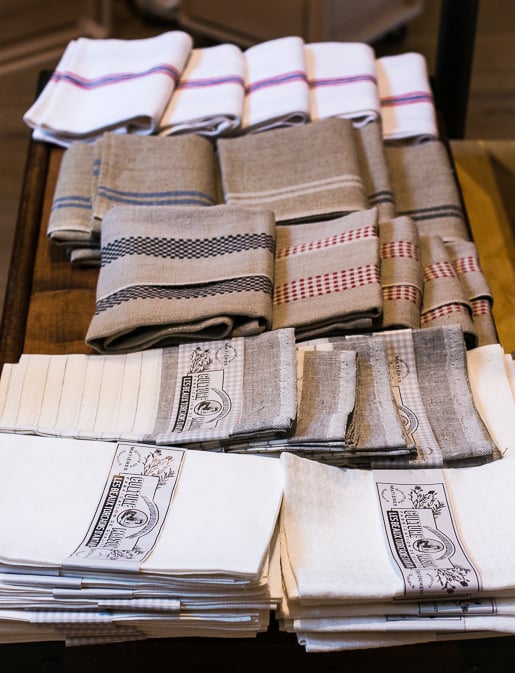 There are beautiful French candles to light your way at home. 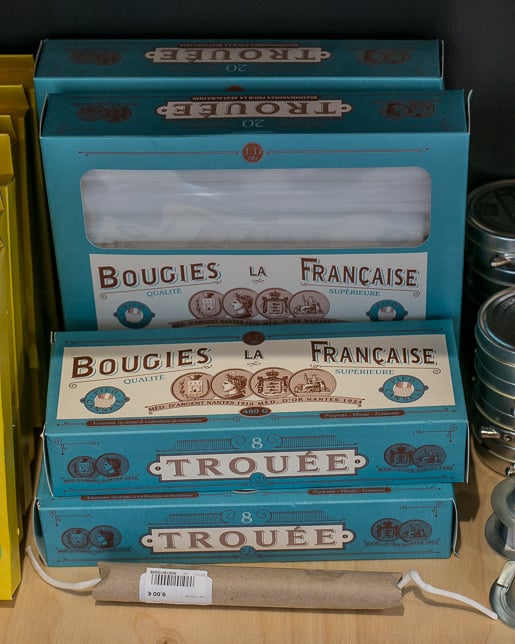 For those looking for cast-iron skillets, they have Swedish versions here. 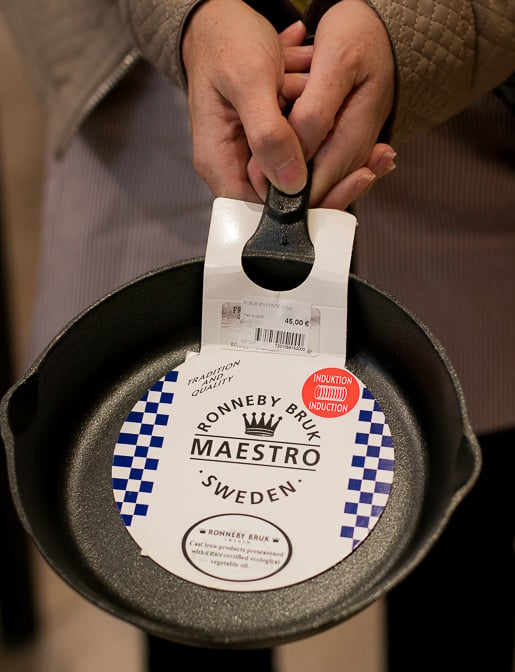 As well as a well-edited (ie: the ones you’ll use) selection of French pastry pans. 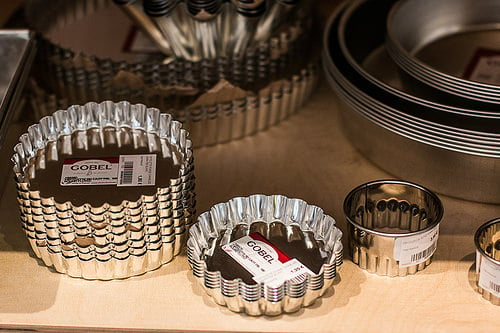 And large wooden boards for serving cheese, charcuterie and bread on, are reasonably priced (especially for Paris) from around €35 to €45, for the largest. 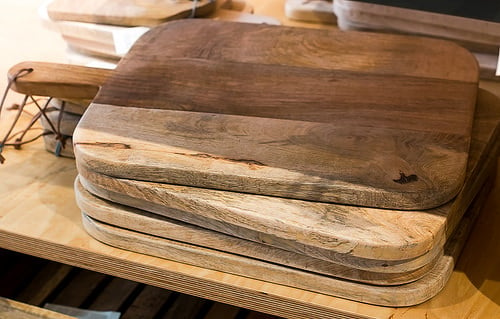 The other wonderful thing about the shop is that you can have a Swedish lunch in their restaurant, Café Smorgås, which was our main reason for heading up there in the first place. 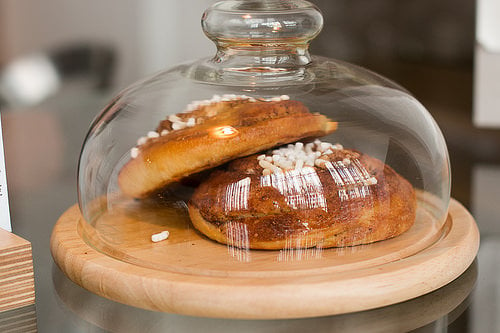 But a wonderful thing about Paris is that you can happen across wonderful places just by poking around the streets in less-familiar neighborhoods. I used to do it all the time, and I need to keep reminding myself to do it more often. 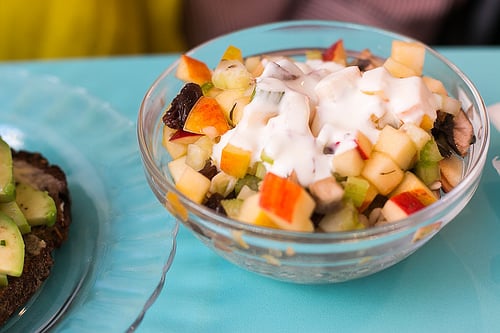 We pulled up seats to our table, which had a cunning cut-out on each side for hanging your handbag or backpack on. Another example of smart Scandinavian design. (Which multitasks as well, since it’s a good way to thwart both people who pilfer bags, and to remind you not to leave your bag behind when you leave.) 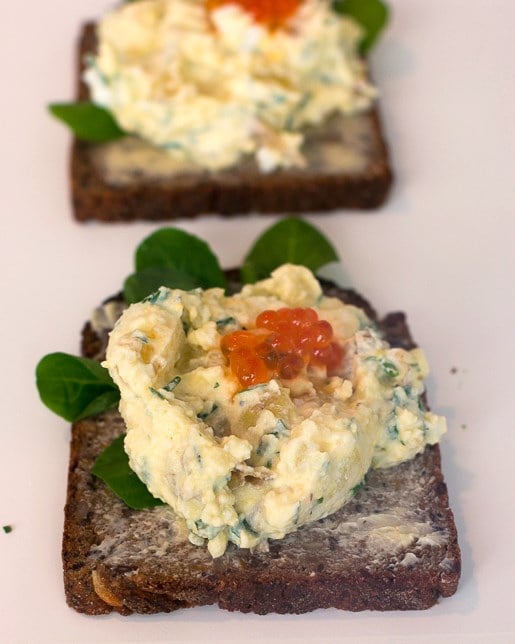 Lunch (€10-15) is a choice of smørrebrød, open-faced sandwiches on buttered, grainy, Nordic bread, which on the day we went, had everything from egg salad with salmon eggs, to avocados and eggs. With our sandwiches came what they called a taboulé nordique, made with a base of barley, topped with finely diced apples, pecans, dried fruits, and celery along with a spoonful of tangy yogurt dressing. Because this was obviously a healthy lunch, it only seemed right to drink apple cider from Normandy alongside. And because the Swedes take their coffee seriously, you can finish your lunch with a cup of coffee from Belleville Brûlerie. Once tanked up on coffee, you can then go finish your shopping. 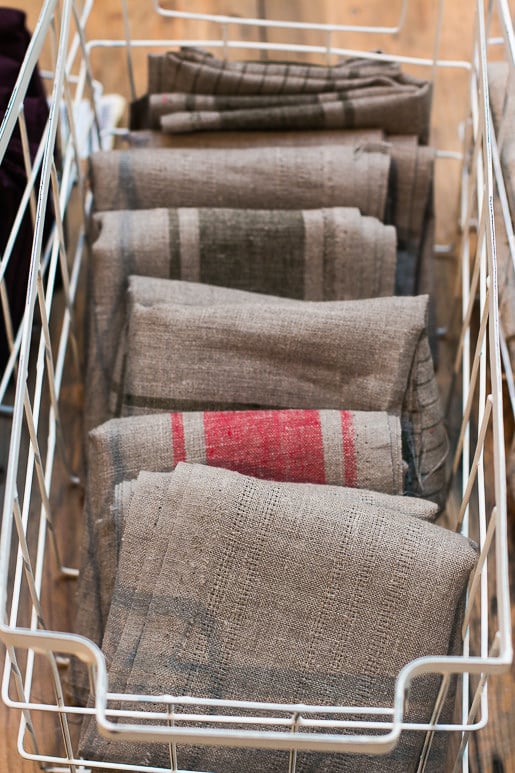 Antiquing Outside of Paris