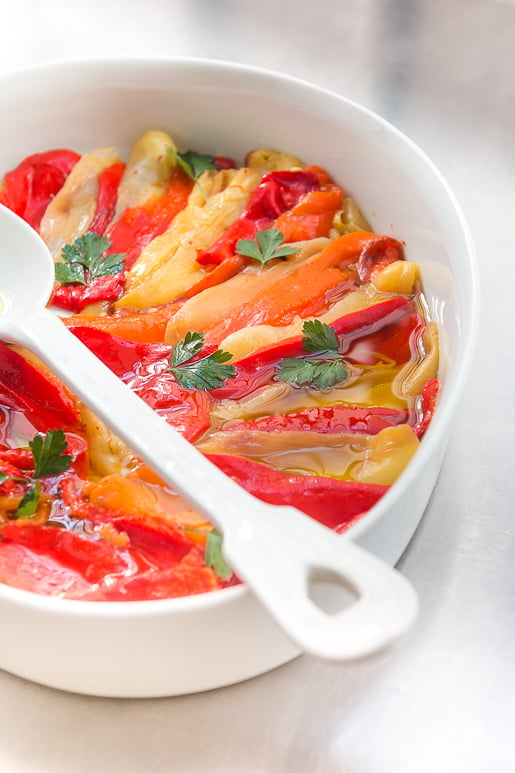 One of the things I don’t like are bell peppers. They’re one of those things that people are, for some reason, always trying to convince me to like. (What’s up with that?) And they always seem to put them on airline food as well, presumably due to their forceful, overpowering flavor, which helps the food make more of an impression on our dulled palates at higher altitudes. (And in my experience, my brain, too.) And if there wasn’t a ban on bringing pointy metallic objects on planes, I’d travel with a set of tweezers to remove the offending red and green strips they seem to like to drape over everything. 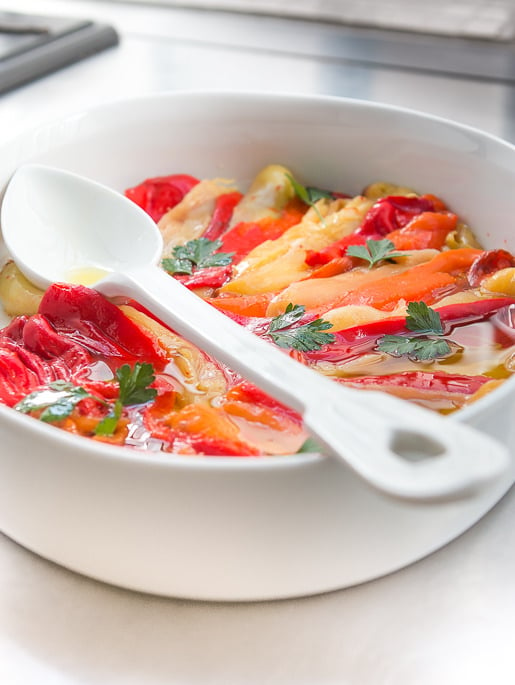 However, like just about every other thing in my life, there’s a contradiction. And in this case, it’s that I love chile peppers — in all shapes, sizes, and colors. Go figure. 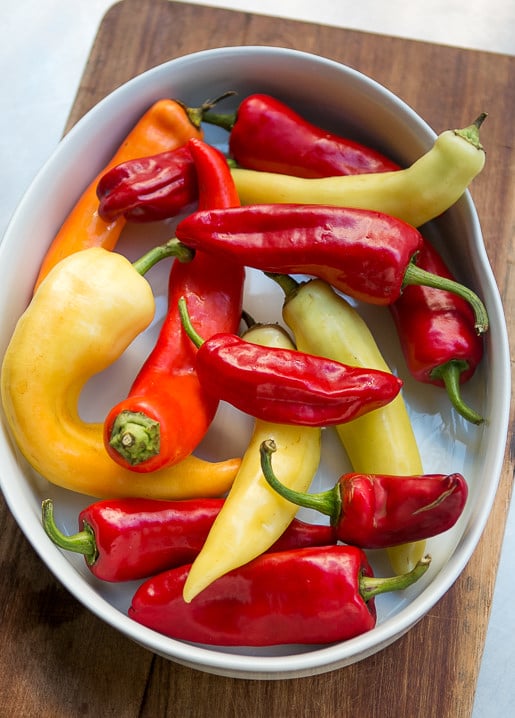 I crave just about anything home-grown, which may be because I live in a city with lots of cars, dogs, etc, where anything growing, you’d be wary of eating. And when we take a ride out to the country, we invariably try to hit as many markets as we can, whatever town or hamlet (which is a goofy word, isn’t it?) that we’re visiting. 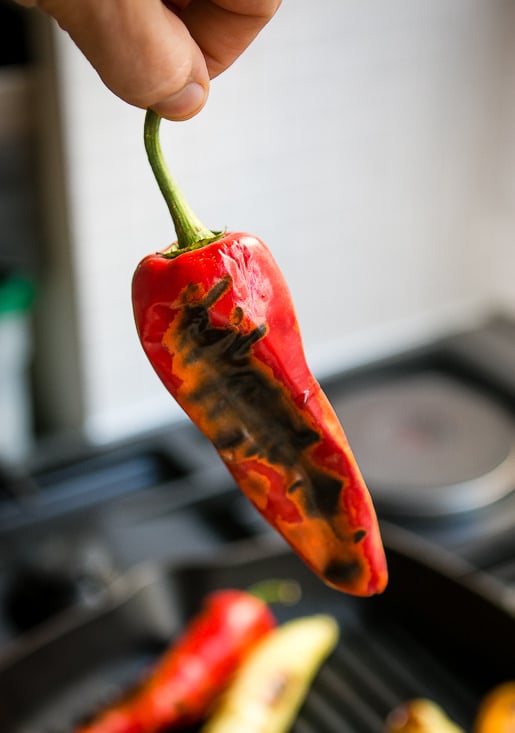 I love nothing more than being confronted with baskets of berries from farms, mountains of winter squash piled on tables at greenmarkets, and bundles of fresh herbs that look like they were gathered by an actual person, rather than the plastic-encased bundles in the supermarket. 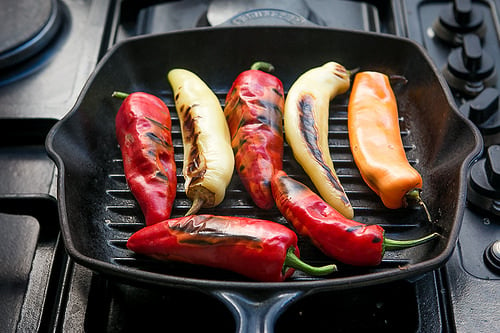 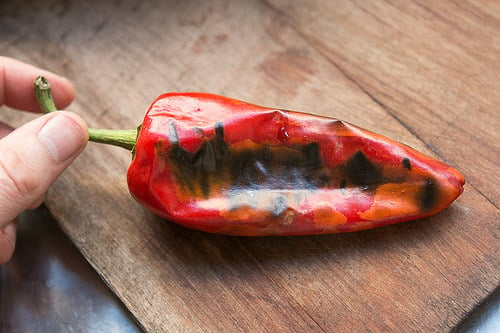 When we were in the southwest of France this summer, my friends were growing piments d’Espelette in their garden, where I went out before each meal and picked what we’d have for dinner. 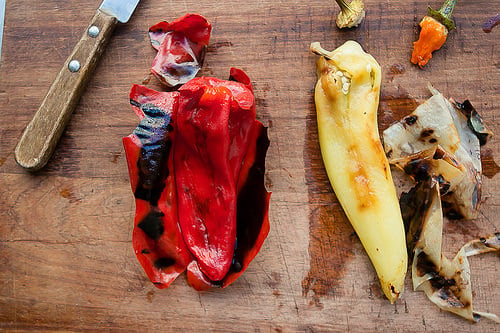 Most of the time in France, you only come across piment d’Espelette ground to a powder, where it enlivens everything from scrambled eggs to Basque cuisine, the same region where the peppers are predominantly grown and dried. But I’ve not come across them fresh at any markets in Paris, and as we all know, when you can’t have something, that’s when you really, really want it. And I’ve been having a hankering for them ever since last summer. 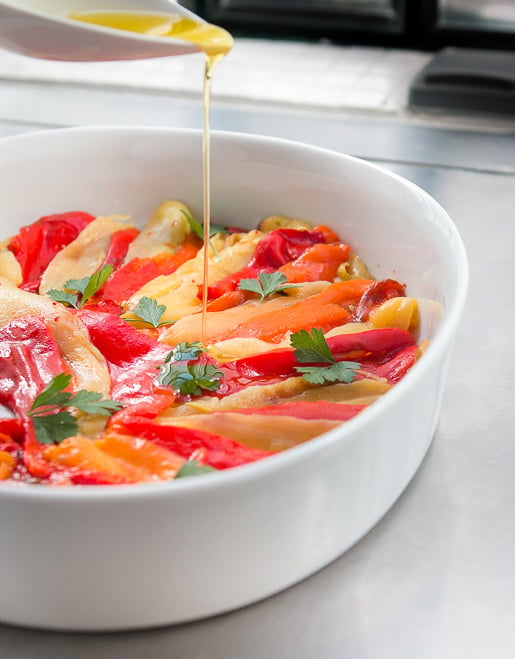 Even fresh, the peppers have a faint smoky flavor and are enticingly spicy, enough to overwhelm the Parisian palate, but satisfying the Basque — and the occasional American — one. (When he is fortunate enough to get his hands on them.) As my friends packed up their house for the winter, they harvested what they could and brought it up to Paris, surprising me with two dirty, but delicious beets, a basket of the last fresh tomatoes of the season, a bag of tiny onions (which I made marmalade from), and a huge sack of mixed chile peppers, which I put in a bowl and admired, until I realized it was use ’em or lose ’em. 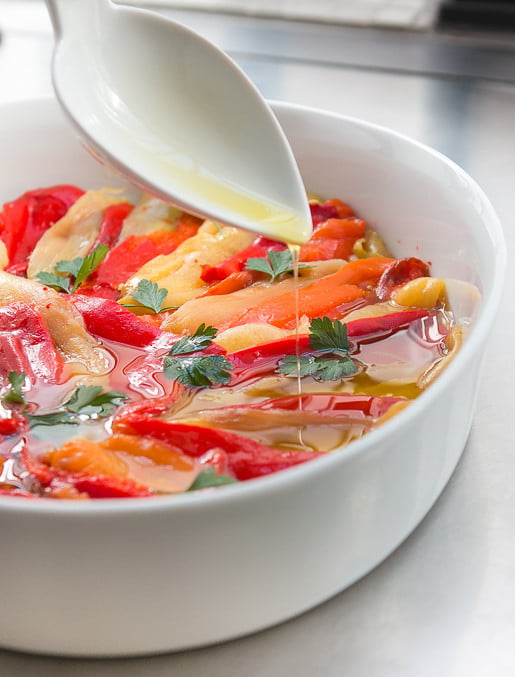 So I got out my grill pan and roasted them all off. Once cooked and peeled, I let them marinate in quite a bit of olive oil, with salt and pepper, and we enjoyed them with a nice dinner of steak-frites with a decent bottle of red, toasting the last vestiges of summer.

Of course, if you have an outdoor grill, you can use that to grill the peppers. Once peeled, some people rinse the peppers to get all the seeds off, but others feel that washing them removes some of the flavor. Personally, I keep a bowl of cool water while I’m peeling the peppers and dip the peppers in quickly, to get rid of the seeds. Chile peppers have thinner flesh than bell peppers, so you may not get those generous, picture-perfect slices of roasted bell peppers like you would with large bell peppers – although this technique works the same with bell peppers, if you’d like to roast those. But it’s not important; it’s the flavor that’s so special. Chiles really vary in terms of thickness, density, and so forth; some will be easier to peel, and others might ne trying for those of you (or I) with OCD. But once they’re all roasted and peeled, by the time you’re drizzling them with olive oil, you’ll be congratulating yourself on a job well done.
1. Heat a cast iron skillet or grill pan over medium-high heat. Add the chiles in a single layer, not too close together. (As shown in the post. If you have a lot, best to do them in batches.)
2. Let the chiles roast until they are browned on the bottom, which will take about 10 minutes. Use tongs to turn the chiles, roasting them on all sides, until the feel cooked through. Remove each chile as it’s done and put it in a paper bag and close the top, or a heatproof bowl, covering it with a plate to make a lid. (The steam will help loosen the skins as they cool.)
3. Once the chiles are cool enough to handle, either completely cut them all the way through in half, vertically, or slit them open so they lie flat. With a paring knife, scrape away the seeds, then turn the chiles over and pull away the skin.
(With some peppers, you may be able to just pull the skin off right away, while others may be a bit more stubborn. You can leave tiny bits on, unless you feel you must trim them away with a paring knife.)
4. Quickly dip the roasted chiles in a bowl of water or run them under the faucet, if you wish, to remove any stray seeds and pat them dry. Lay them in a serving dish and drizzle them with a generous amount of olive oil, and sprinkle them with salt and pepper, finishing with a scattering of chopped or picked parsley leaves.

Storage: The chiles can be roasted up to a week in advance, marinated in the olive oil with salt and pepper, and stored in the refrigerator. (They can also be frozen, see links, below.) Serve at room temperature.

How to Roast Green Chiles over a Gas Flame (Simply Recipes)