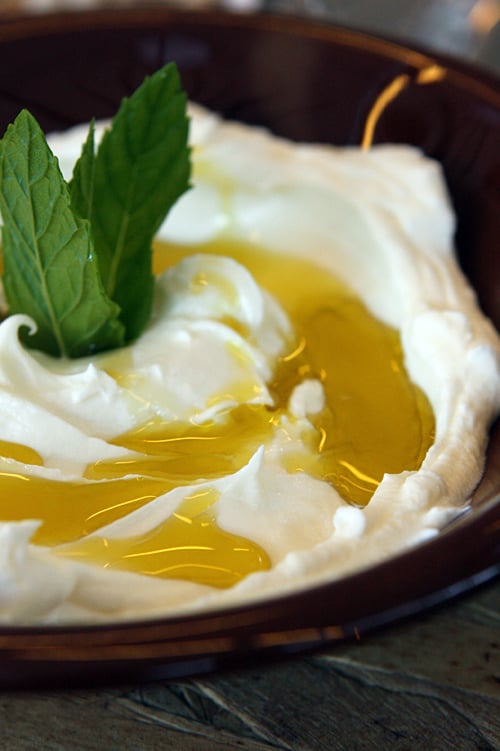 The Lebanese are real “snackers”, a point brought home by Mazen Hajjar, the owner of 961, Lebanon’s first (and only) craft brewery that told me if I went into someone’s home in Lebanon and they offered a drink – but no bowl of nuts or seeds, “You should go…just get up and leave immediately.” 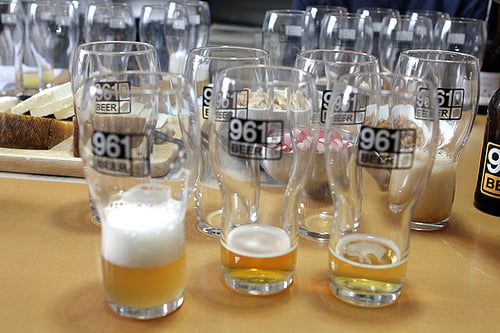 Fortunately I never had to, because true to his word, each and every place in Lebanon where I was offered a drink, a generous bowl of bzoorat – some tasty combination of peanuts, hazelnuts, pistachios, sunflower and pumpkin seeds, etc. – were offered. And I always seemed to have my hand in a dish of them. 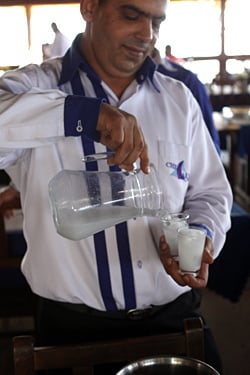 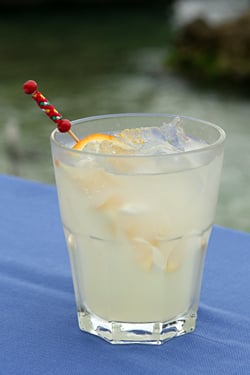 So it’s no surprise I went nuts, so to speak, at Al Rifai, considered one of the best nut roasters in Beirut. When I walked in, I was immediately drawn to the glowing glass and stainless-steel bins, radiating with the heat coming off the piles of freshly roasted nuts. 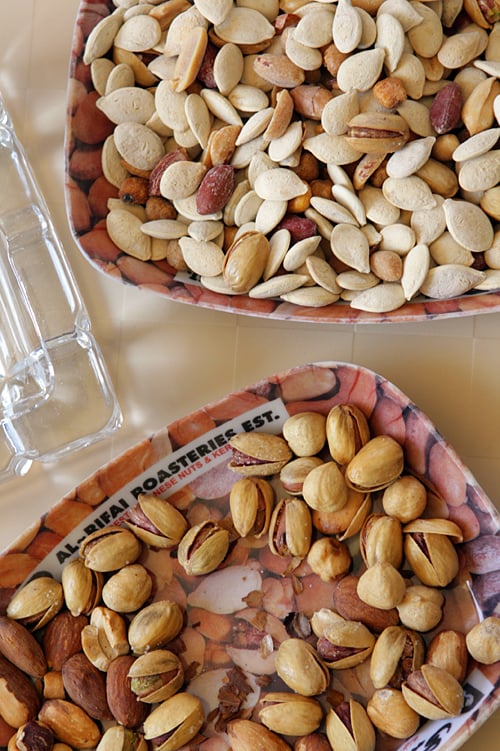 I picked up a few bags to bring home and it’s fun to choose your own from the dozens of nuts and seeds they offer. Some are plain, other spiced or glazed. And it’s fun to mix ’em up. Showing true Lebanese hospitality, as I selected each one, the woman at the counter plunked down a little bowl of them for me to snack on while weighing and filling my bags. Good thing they didn’t weigh me on the way out, because I’m pretty sure I ate as much as I bought. 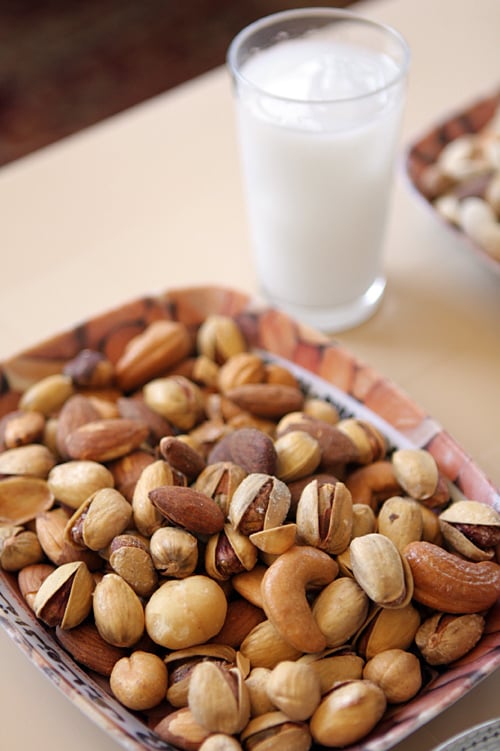 And now, I’m officially just as hooked as the Lebanese are. So it was a good thing Al Rifai has a large kiosk at the airport where I stocked up on even more bzoorat, along with all the locals, who also wanted to be as certain as I that we would have plenty of nuts and seeds while outside of the country. (Either that, or they were also looking for a way to pass their time when their plane got delayed for nine hours, too – oof.)

Another treat that people in Lebanon snack on are fresh fava beans. I saw people waiting in line at butcher shops and souks, biding their time, shucking the long shells, and popping the smooth little beans in their mouths. Lebanese people seem to eat them, well…everywhere. 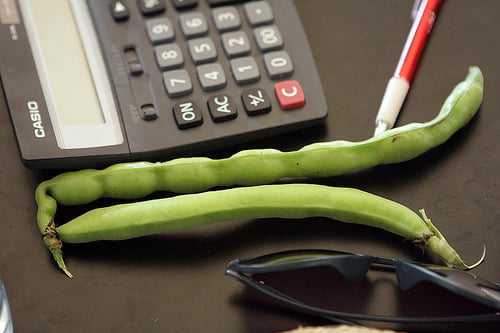 If you’re seated at a table (as opposed to an office desk, which admittedly might get a little messy), the beans get dipped in a bit of olive oil and I like them with a few crystals of salt as well. 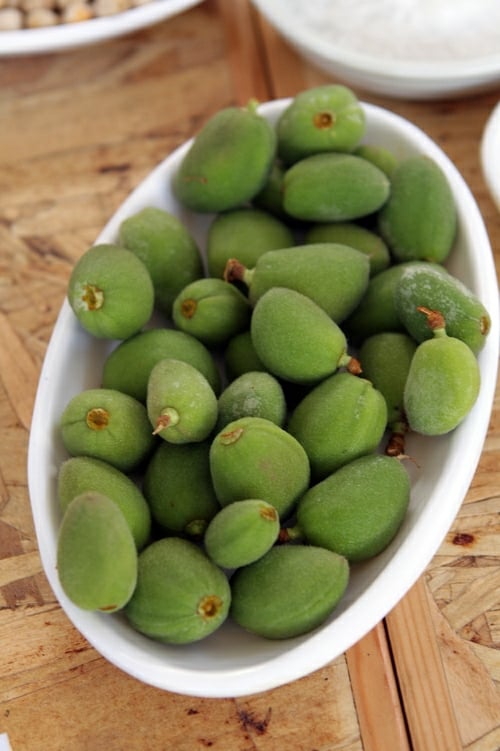 Other pre-meze snacks include very young green almonds, and Lebanese people eat the entire thing – fuzzy green casing and all. They weren’t my favorite, nor were the tiny, green underripe plums, which were too sour for my taste. Interestingly, they also sold tubs of both at the airport as well. 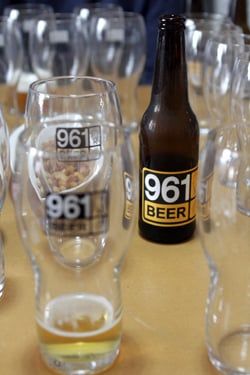 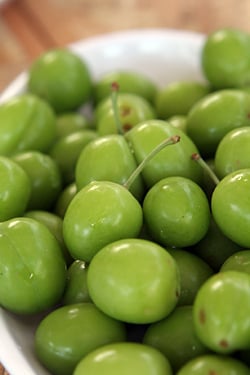 If having a drink by the sea, you might get pickled seaweed, marinated in a salted brine with a bit of lemon to go along with your cocktail or “Mexican beer”, which sounded odd to me as I couldn’t understand why beer from Mexico was so prevalent in Lebanon. Until I realized it just refers to a glass of beer served in a salt-rimmed glass. 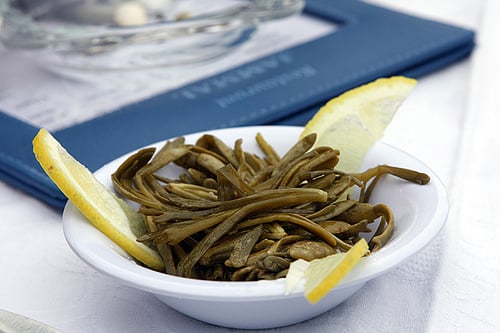 A popular drink for an aperitif, or even to accompany the entire meal, is arak, a high-test distillation flavored wtih anise seeds; the arak-maker of Domaine de Tourelles told me the best were from Syria, but due to the unfortunate strife in their neighboring country, they weren’t going to be able to get more in the future. So drink up! 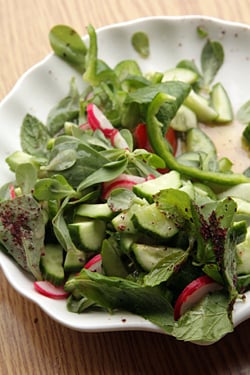 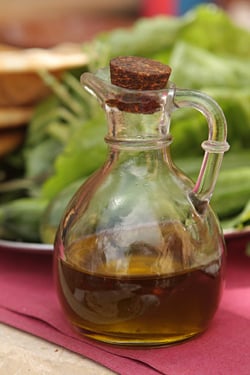 The rule I learned when you eat with the Lebanese, whether in a restaurant or in someone’s home, is to not to eat everything the is first set down on the table. (I also learned, like bowls of nuts on tables, if there isn’t the obligatory carafe of thick, golden olive oil on the table, you should leave as well.) Bowls and bowls, and bowls and bowls of meze will be brought out after you’re done with pre-meal drinks and snacks. And while it’s hard to resist dipping the pita or saj bread into absolutely everything within reach, you need to steel yourself for the main courses, which will arrive just when you think you can’t eat any more. And I have the tummy to prove it. 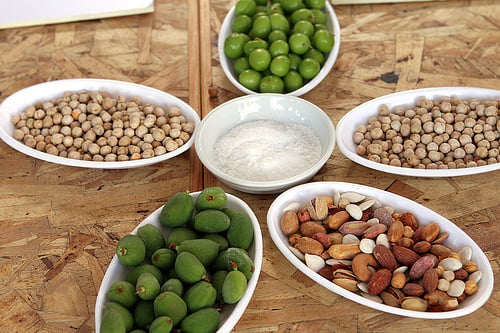 The most famous meze is hummus, a smooth chickpea paste made with tahini. The Arabic word for chickpeas is “hummus” (spelled various ways in English, as are other dishes) and it’s rare that you see hummus flavored with anything; additions are added to the shiny olive oil pooled in the middle.

Everything from more chickpeas, to za’atar, pine nuts, sumac, and even preserved lamb cooked in its own fat (awarma) are spooned in the oily well and scooped up. 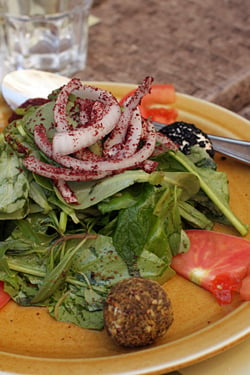 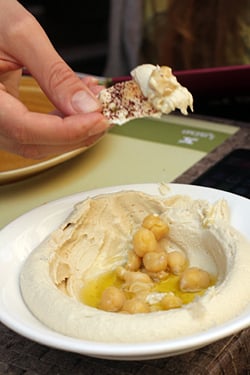 Other dips include eggplant-based mutabal (also spelled moutabal), which is what we often refer to as Baba Ganoush in the west. And there’s Labneh a spreadable fresh cheese, eaten like a dip, made by draining yogurt for several hours or overnight. You can easily make it at home and some Greek yogurts are basically labneh, although apparently there is a good amount of controversy over what constitutes Greek yogurt these days due to companies taking liberties with the terms and process.

But it’s one of the easiest meze to put together and you just smear it onto a plate, or a shallow bowl, take a spoon and make some divots in the surface, and pour on the olive oil. I like mine with toasted nuts and sumac, a red seasoning that’s tart and tangy, and used liberally in Lebanese cuisine. 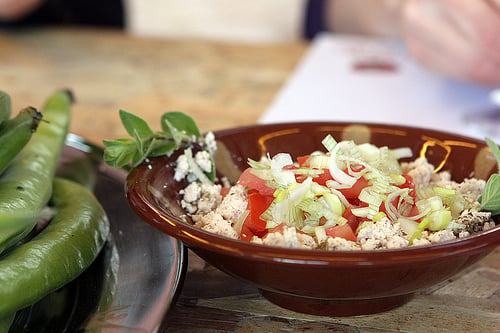 One curiosity I liked was Chanklish (or Shanklish), a blue-molded cheese whose fermented flavors are best enjoyed crumbled, with olive oil poured over the salad and leaves of za’atar, an herb with flavors reminiscent of thyme and savory, get scattered here and there over the top. 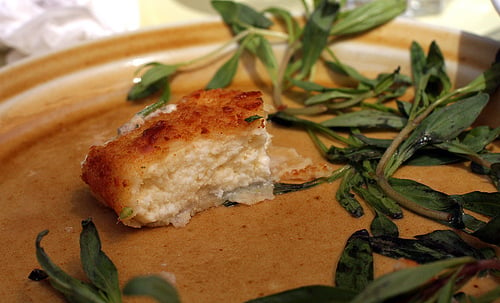 One of my very favorite meze dishes is Halloum Beajine, or fried haloumi cheese. I like it so much that, as you can see, I scarfed most of it down before I took a snap of it. I often ate this for breakfast, where it was served at room temperature, cubed and soaked in spiced olive oil, and served with olives. 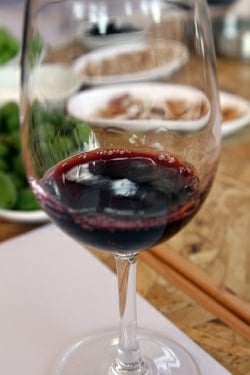 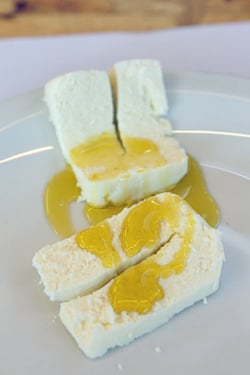 Almost all the meze I had were vegetarian and would certainly fall into the “healthy” category, as most contained, nuts, seeds, olive oil, fresh herbs and cheese, and vegetables. So if you like vegetables as much as I do, it’s definitely a pleasure to be in a place where they are celebrated and served in abundance. I never get when people make derisive comments about vegetarian cooking because I could eat this way for the rest of my life and be happy.

Herbs, cheese, pickles, nuts, seeds, and fresh fruits and vegetables are an integral and important part of Lebanese cuisine. I especially enjoyed a vegetable-rich version of labneh known Labneh al Balad, where finely diced fresh vegetables were mixed into the thick, white spreadable cheese. Both that, and the fried haloumi, are on my list for things to put in my regular rotation at home. 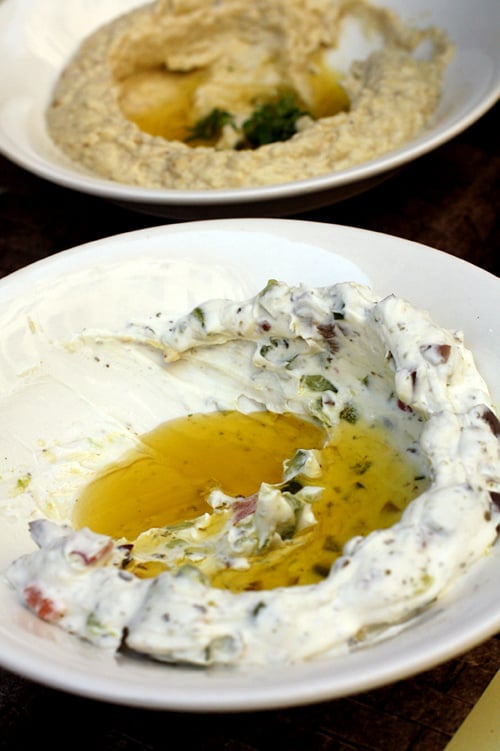 Big, generous, leafy salads figure into Lebanese cuisine and I couldn’t get enough Fattoush, a mixed bowl of lettuce, tomatoes, cucumbers, and fried or toasted pita chips, all seasoned with a dusting of sumac and pomegranate molasses. 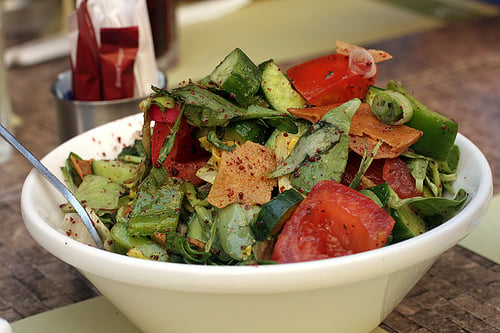 I was over-the-moon happy to discover Fatteh, a dish named after the crumbled bread (fattat), which is a baked casserole cooked with deep-dried crumbled pita chips, and sometimes chicken, eggplant, or hummus, then can be served with pine nuts and dried mint scattered over it. It was so good I was glad I went to Al Balad the last day because I had to have it one last time.

Tabbouleh is another popular salad and unlike versions elsewhere, Lebanese tabbouleh usually has just a slight scattering of bulgur (ground wheat) in it. Or sometimes, none at all – it can be offered as just a big bowl of dressed, shredded flat-leaf parsley with bits of tomatoes. 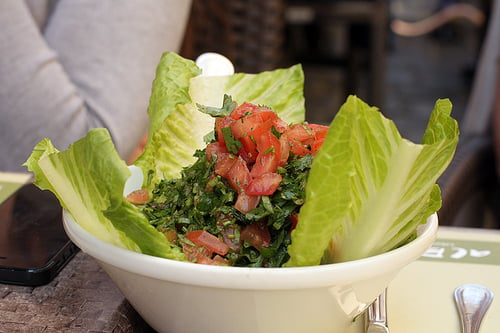 Until a half a head of raw cabbage was plunked down in front of me, I didn’t realize this, but tabbouleh is absolutely delicious eaten by tearing off a cabbage leaf and using it to scoop up and eat the herbal salad. 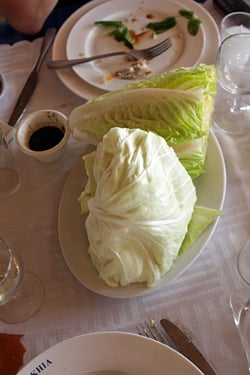 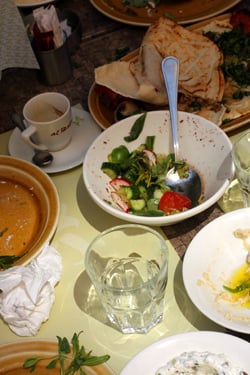 Other times, people use leaves of romaine lettuce, which are a bit more decorative – but just as effective. 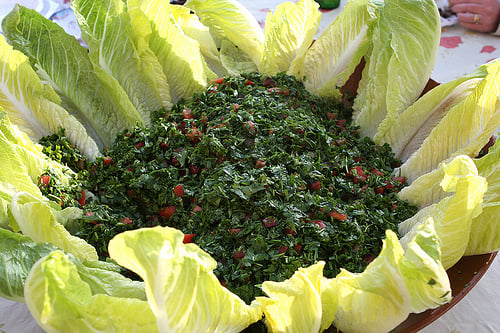 Note: You’ll notice certain dishes and ingredients are spelled a little differently in various places in this post. Since they were translated from Arabic, there are variations in how they read and are pronounced in English. (Such as hummus, labne, and moutabal.) I provided the terms that were written on menus in Lebanon or those that seemed to be the most commonly used.