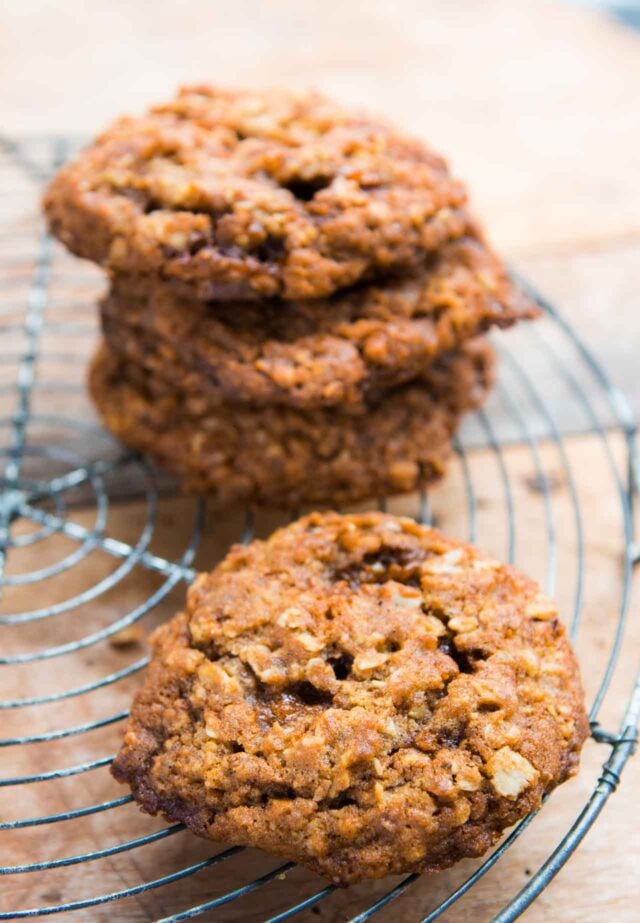 This year was a good year for baking books. I didn’t get to see them all, or bake from them, but one that I got a preview of before it was released was Dessert Person by Claire Saffitz. She may be familiar to you because of her tenure in the test kitchen at Bon Appétit and more recently, her very popular online videos, but reading through the book, I learned that she just happened to have gone to Harvard, was a graduate student in French food history in Montreal, studied pastry at Ecole Ferrandi in Paris, and worked at the now-closed Spring restaurant, which jolted me back that era in Paris when a younger generation of chefs was opening restaurants and changing the game in France (sometimes, controversially), focusing on fresh ingredients and putting their own mark on French cuisine.

That’s how I feel about her book. Claire pretty much changes the pastry game. Preserved lemons are added to a glorious-looking Lemon Meringue Cake, chocolate and hazelnuts enrich a Galette des Rois, and coffee finds its way into a Coffee-flavored Coffee Cake. (How come no one’s thought of that before?) But these Oatmeal and Pecan Praline Brittle Cookies sounded so good to me that I decided to start off with them.

I should also note that I was surprised to get a shout-out in her book. I never dreamed any of those whippersnappers with their newfangled video programs even paid any attention to me. But Claire kindly gave me props (and James Beard) for inspiring her Spiced Persimmon Cake. So don’t count me out yet! 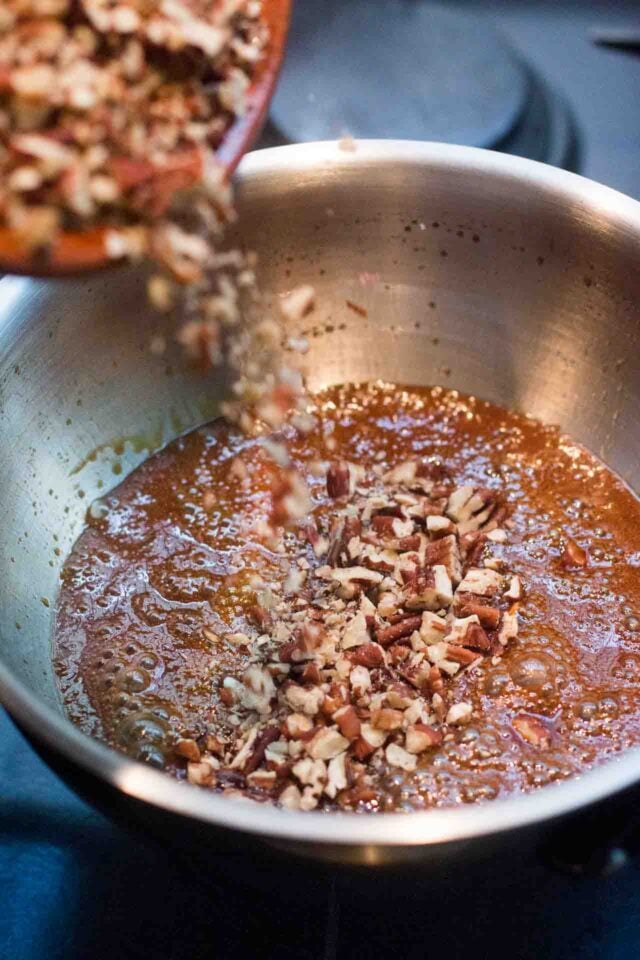 Dessert Person contains mostly dessert recipes, of course, and like Claire, I am someone who is always up for dessert. I, too, am disheartened when people say “I can’t bake” because it’s really just measuring things out and following the recipe. One cup (100g) of oats is one cup (100g) of oats. To make things even easier, Claire talks you through all the recipes, giving lots of guidance and tips as you go, more than one might think is necessary. But when I made these cookies, I had some questions which…I found out, were answered in the very next sentence.

Not all the recipes in the book are easy, though. But she’s extremely diligent in letting you know both the active time and total time it’ll take you to put together each dessert. (I never know how people figure those out, but I’m glad someone else knows how to do it.) She also assigns a rating to each recipe, from 1-5, or Very Easy to Very Challenging. But flipping through the book, a majority of the recipes fall between “very easy” and “moderate.” Even better, while some may call for an ingredient, like preserved lemons or turmeric, most of the recipes include things either you likely already have on hand, as I did for this recipe, or things you can find in any well-stocked supermarket. Thank you Claire! 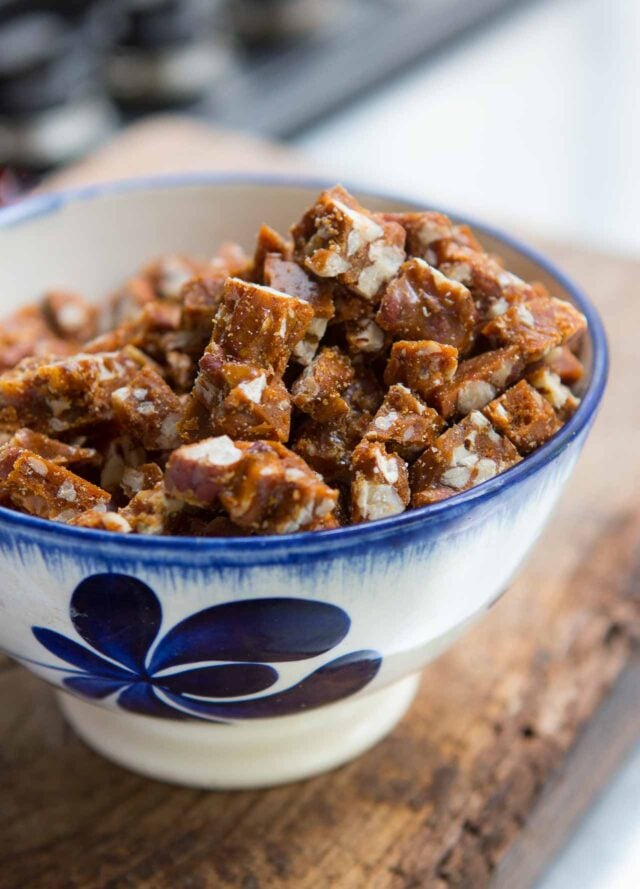 People ask me how I can tell if a cookbook is good even before I’ve made anything from it. From a baking standpoint, if an author is specific about certain details and tells you what to look out for, and sometimes what they’ve tried that didn’t work, you can be assured the recipe was well-tested. And not to sound like a broken record, but when I test recipes I try them with various amounts of flour, baking powder, sugar, eggs, butter, cream, etc., before I land on the one that I consider the best version. When others say to people who want less butter or whatever in a dessert with “Just eat less!” I agree that’s usually a better strategy than cutting back on things the recipe developer slaved over to reach their published conclusions, i.e.; the book. 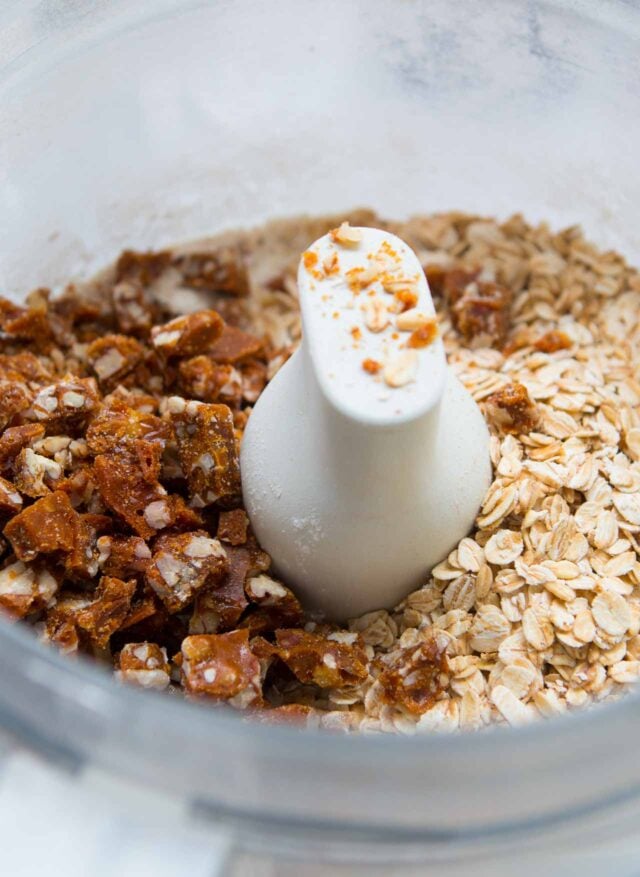 (Sorry to take a moment here for just a little public service announcement: I made the pecan praline that you see above a few days in advance and it was impossible not to sneak a bit every now and then. Okay…it was more often than “now and then” so if you’re okay with a little math, you may want to make a little more. Just so you know, you’ll need about 2 cups/300g to make the recipe. You could probably sneak a few pieces for yourself which won’t affect the recipe, but I was dangerously close to going over that allotment.) 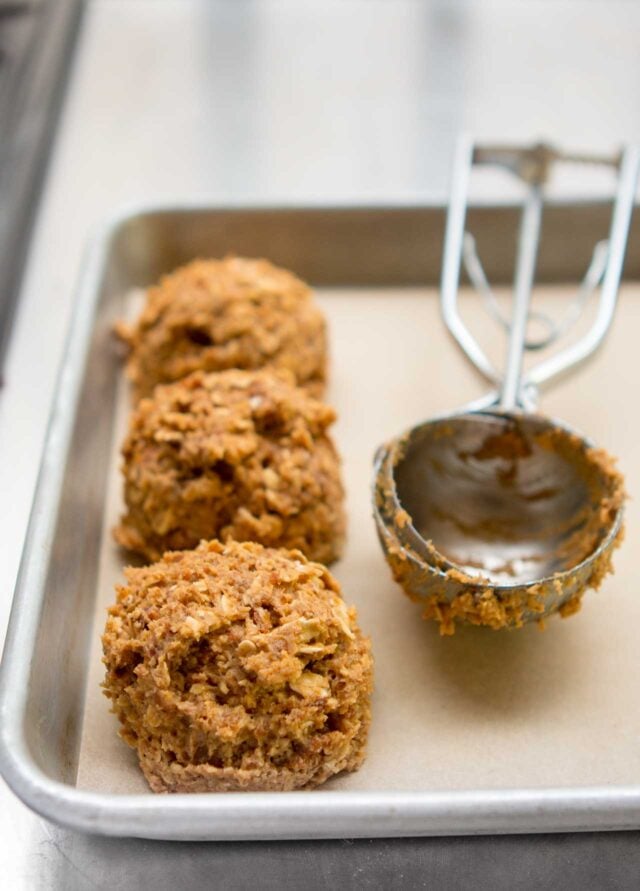 These cookies require a few steps but as the headnote says, “…the point of jumping through all these baking hoops is that you’ll be happy you put in the effort” when they’re done. I knew I was on the right path after I made the brittle, which was easy, but yes – it was a step. The brittle requires you to heat up sugar and butter – but no thermometer is needed – then add the nuts and spread it out until the mixture is cool. Half the brittle is ground up with oats and flour and the other half is added to the cookie dough so there are melting pockets of praline running through the cookies. 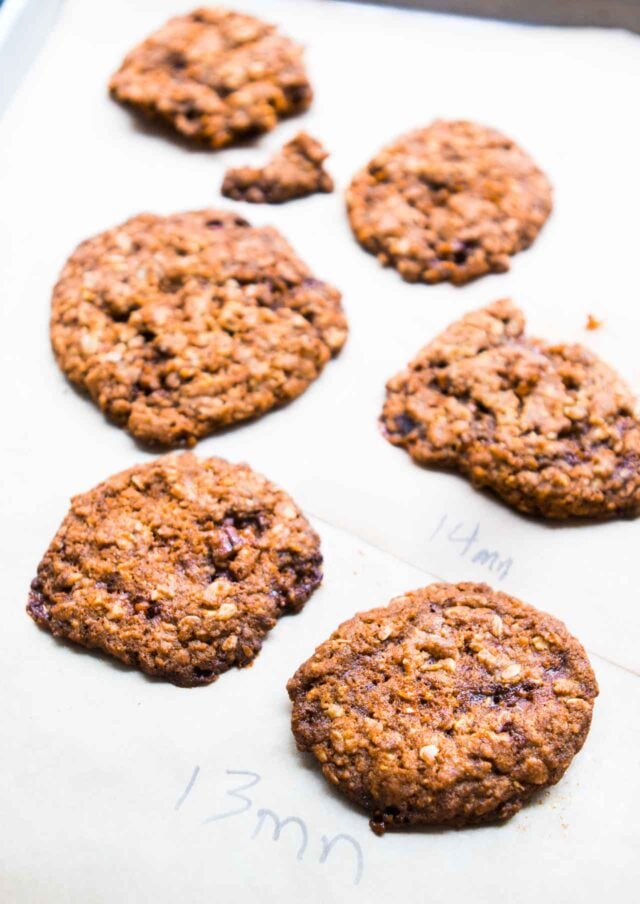 There’s also browning of butter and doing everyone’s least favorite kitchen project: hauling out the food processor. I don’t know why but I guess it’s because it’s something that’s not used very often for most of us, so we store it away until we need it. Then, when you do need it, it’s that big, bulky thing with the feed tube sticking out of the top and that overly long cord that seems to wrap its way around whatever is near it, that gets dragged out of the cabinet and you mentally calculate if the cord is long enough so you can safely haul out the food processor without yanking out the blender or sack of flour the cord is hooked around, or if you need to stop and free up the cord.

But yes, you’ll need a food processor to make these cookies. 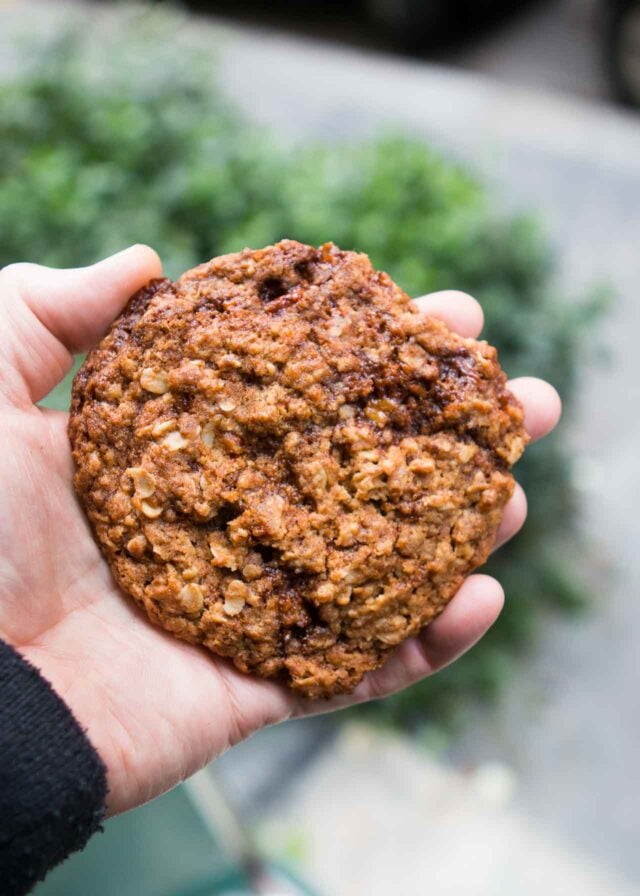 When I was portioning the dough, I thought, “Wow, these cookies are huge!” Then I remembered, “…oh, those wacky Americans” and realized they were American-sized cookies. After I made them, I saw Claire posted a video of making these cookies and she goofed and made them the wrong size, and started cutting the portioned cookie balls into thirds, etc. to get them to the size indicated in the book. I tested them using half the amount of dough recommended per cookie, making notes on the various cooking times (a few photos above) as I went, and they came out just fine. 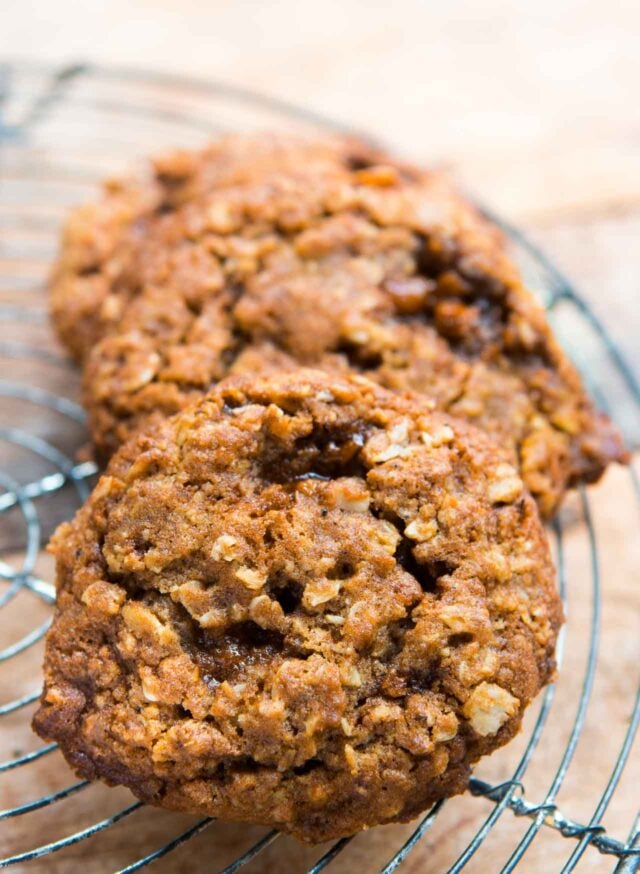 Like Norma Desmond in Sunset Boulevard who was told, “You used to be big” when they counted her out, and replied “I am big. It’s the pictures that got small.”

In my case, even though my cookies may have indeed gotten smaller than Claire’s, my conclusion is that both are wonderful. And I wouldn’t count either of them out. 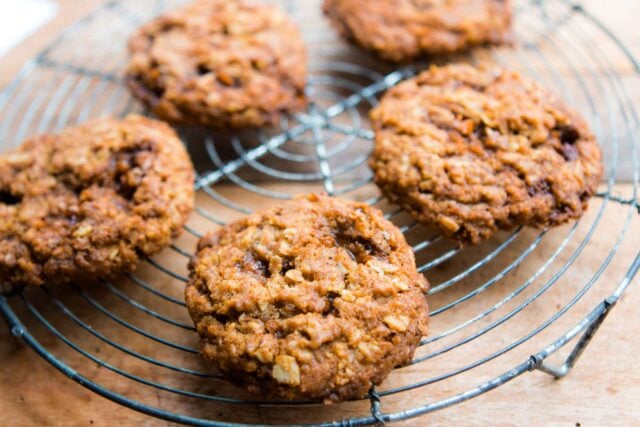 Adapted from Dessert Person: Recipes and Guidance for Baking with Confidence by Claire SaffitzThis recipe requires a few more steps than other cookies, but the pecan brittle can be made in advance and stored in an air-tight container at room temperature for up to a week, or in the freezer for a few months. For making the dough, you'll brown butter and mix it up, then chill it before baking. So you'll want to read through the recipe first to check out the timeline.In addition, Claire's original recipe requires a few pans, a stand mixer, and a food processor. If you don't have a stand mixer, the dough can easily be made by hand, in a large bowl with a spatula. I haven't tried it but you may be able to use a blender to pulverize the oats and praline; it might be necessary to stop the blender a few times and stir things up to make sure it all gets crushed properly. If it's not absolutely smooth, I wouldn't worry too much about it. But if you use a blender, let me know in the comments how it works outI baked the cookies in the full size that Claire recommends, and also in a smaller size, using 2 tablespoons of dough per cookie, which I baked for about 10 minutes. Lastly, note that the cookie dough rests for 12 hours before baking. The world will not come to an end if you bake them sooner, but chilling them for a least a few hours is recommended for chewier cookies.
Course Dessert
Servings 18 cookies

For the pecan brittle

To make the pecan brittle 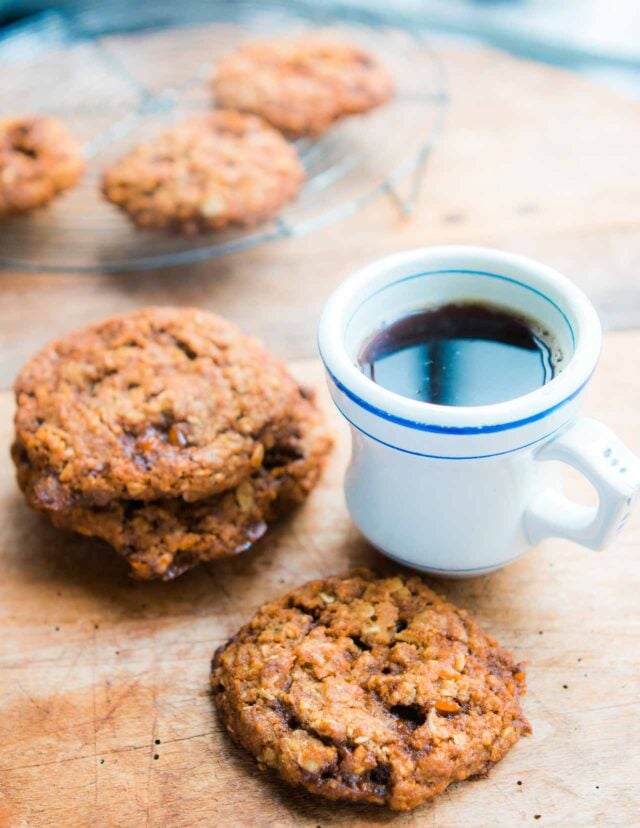