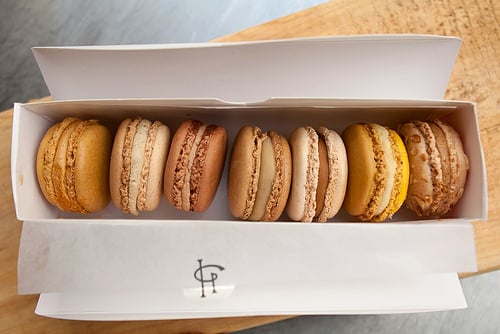 One of the things about living in a city like Paris is that you spend a lot of time – well, dealing with life. Bills to pay, paperwork to do, typos to avoid, stolen bikes to replace, smokers to dodge on sidewalks waving lit cigarettes (I got nailed the other day – ouch!), or buying a pair of shoes, can easily take up much – or all – of your days. It’s too-easy to get wrapped up in all that minutiae and let all the things you love to do get overwhelmed by the other things that tend to take over, if you let them.

I’ve let them and decided to do a little turn-around by revisiting the places and eating the things that I love in Paris. It’s easy to forget the pockets of wonderfulness that people see when they come here for a week – the parks, the boulevards, the chocolate shops, and just taking a stroll and getting some air (in between all the sidewalk maneuvering) and take in the city. 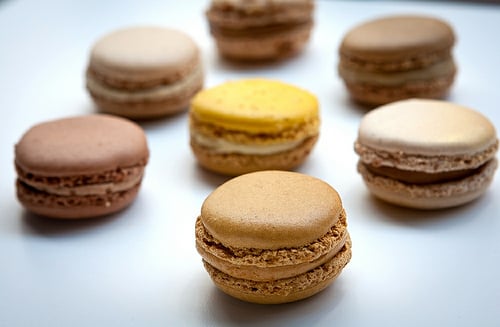 Macarons aren’t new. Macarons gerbet, or filled macarons are distinctly Parisian and have been around for about 150 years. True, they are available elsewhere nowadays. But like a New York or Montreal bagel, or Chicago deep-dish pizza, certain foods get designated with an appellation because they are so closely associated with where they were first made. (Bagels and pizza are from neither of those places mentioned, originally. And macarons, which were originally from Italy, then came to France and are usually available as simple, crispy cookies made with egg whites, sugar and almonds.) But that’s getting back into minutiae, a word I had to look up the precise spelling for, twice (more minutiae!) and I’m more interested in tasting pastries. So I took a stroll over to the relatively new Pierre Hermé macaron boutique in the Marais.

Macarons kind of had their day in the soleil. Everyone wanted to either make them, or come to Paris and sample them. For a while, almost every day a question or two would land in my Inbox from people who were making macarons, wondering why their macarons didn’t have the ruffled “feet”, or why their tops cracked – and could I diagnose them? Interviewers were astonished when they’d ask me what flavors of macarons Parisians made at home, and I responded that I couldn’t think of anyone that made macarons in Paris because no one had the space for a baking sheet on their kitchen counter. And honestly, it’s easier for people to get them at their local pastry shop or bakery.

Like cupcakes, the frenzy revved up fast, then settled down. And it’s time for me to appreciate them again without the hype. And while some companies become global brands and opened outlets in the most far-reaching of places (selling everything from macaron-shaped pillows to sweet-smelling candles and key rings), often foods don’t travel well outside where they make sense. (And as much as I like cookies, I don’t think I need a pillow shaped like one.) I like burgers and falafels and Japanese noodles, but it’s nice to eat something distinctly Parisian, here in Paris.

Pierre Hermé is one of the world’s most famous pastry chefs and Dorie Greenspan, who co-wrote several of his cookbooks, said when I was on a panel with her that because of him, people have started paying attention to pastry chefs. When I wasn’t looking up how to spell words, or convincing shoe store owners to let me buy the shoes I wanted, I used to go into his shops a lot (before I had to keep buying new pants and belts…) But when I stepped into their boutique in the Marais, the folks were just as friendly as they’d been at their busy Left Bank address. The store in the Marais sells only chocolates and macarons. And since it was December, the seasonal collection was a nod to the holidays. 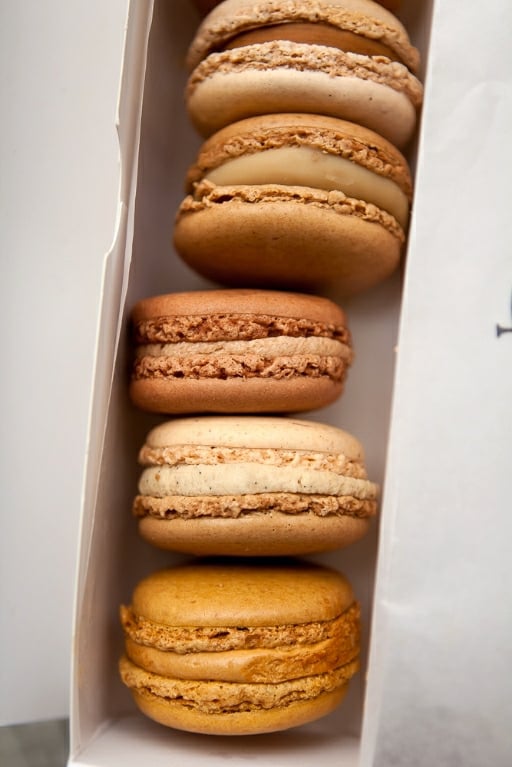 Before I get to the others, I finally tried the macaron with foie gras (and figs) and my initial reluctance was merited. I didn’t like it. (Which goes to show when someone says they don’t want to try something, don’t try to coax them into it.) That special, silky-livery flavor works well as a savory dish with fruit or spices. But sandwiched between sweet almond cookies, it was the one macaron I didn’t finish.

On the other end of the spectrum was PX, a macaron filled with golden raisins macerated in Pedro Ximenez sherry. The first bite was pretty amazing, and sherry and raisins should become one of the new classic macaron flavors, along with café and chocolate.

I was feeling a little chintzy because I had finally shelled out too much money for a new pair of shoes that day, the same model as the ones I’ve worn to the ground after six or so years. So I didn’t pop for the white truffle and hazelnut macaron, which I like a lot, but filled the rest of the box with Praline-noisette (caramelized hazelnut), which was delicious, Infiniment caramel which had a cushion of salted butter caramel in the middle (sweet, but with a nice touch of burnt afternotes) and Lemon-speculoos (spice cookie) which I liked, but I was hankering for another one of those raisins-soaked-in-sherry numbers. Jardin dans les bois (Garden in the woods) was a sweet little sandwich, cushioned with cream imbibed with aged rum and a little hint of woody cedar afterward.

It was an interesting and curious combination, which made me respect Pierre Hermé even more because unlike the pine-flavored dessert I’d had in New York last year (which tasted precisely like Pine-Sol, which folks might point that it isn’t meant to be tasted – but I’m blessed with an active imagination), this was a good example of the famed French predilection for le moderation, which favors a balance of flavors rather than hitting people over the head with things that (they think) taste like floor cleaner. Hermé really is the master of balance and seems to always be able to meld the nuances of various flavors and aromas into his pastries, while providing a curious hint of surprise, and his macarons are perfect examples of that. 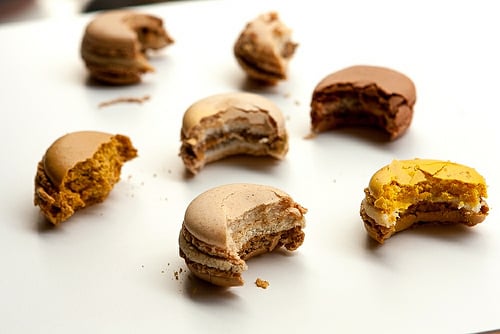 It was nice to connect with an old friend, namely le macaron, which I’d taken off the backburner. (And I got some spiffy new Trippen shoes, to boot.) I’m looking forward to going back to favorite places and discovering some new ones, now that I’ve got the shoes – and a bike – to do it.

(For their other addresses in Paris, consult their website.)