I was deeply saddened when I heard that someone who happens to have been a culinary icon (and hero) of mine, and who I was fortunate enough to work with in the kitchen, is no longer standing behind her stove. This morning I learned that Judy Rodgers the chef-owner of Zuni Café, had passed. I was fortunate the work with Judy for a few years on and off at Chez Panisse. Judy was incredibly dynamic as a person; so much so that I think even she had trouble dealing with all her energy! She was also a dynamic cook. And like the best cooks, her food wasn’t ever about her: It was about the food.

The roast chicken with bread salad at Zuni was the most iconic dish she made and was always worth waiting for. (Although once we drank too many martinis from the bar while we waited for it, and when I got home, I realized that I’d skipped out on the bill! – which I did go back and pay the next day.) The Caesar Salad at the restaurant was the best you could get, as were the pillow-light ricotta gnocchi and the excellent hamburger, which was perfect in every way. Whatever Judy made, was the best. In fact, one of the best things I ever ate in my entire life was a simple salad she’d handed to me one night at Chez Panisse, composed of escarole, rabbit loin, potatoes, and garlic confit smeared on toasts, all tumbled together with a warm, mustardy-dressing. I never dreamed a simple salad could taste so good, and I still remember the exact moment when I put the first forkful in my mouth – it was so, so good, and I still think about it nearly twenty-five years later.

Judy wrote an incredible cookbook, The Zuni Cafe Cookbook, which was a big hit. Not because she was a fancy celebrity chef (which she definitely wasn’t) nor because she was one of the most important people in the evolution of California cuisine. And not because the recipes for her earthy, deeply flavored food were so spot-on. But because her unique voice is heard in every instruction, every headnote, and every word in every recipe in that book. Each word remarkably conveys exactly what she was trying to say. I don’t know how she did it. But like that salad, she could be so evocative without making it seem like an effort.

She had a knack for unearthing condiments and combinations that worked perfectly. We used to joke in San Francisco that there was always at least one thing on the menu at Zuni that you had to ask a server what the heck it was. Honestly, I don’t know where she came up with all those obscure things. (And who knew that anchovies could make plain shaved celery taste so good?) On more familiar ground, her red onion pickles are the best possible use for the most common of vegetables and if you haven’t made them, put them on your list for the weekend. This is one of the few books that if you are a cook, whether you’re a regular home cook or a highly skilled chef, reading it will make you a better cook.

When I woke up today there were some random messages in my social media streams about Judy’s passing. She’d been ill for a while and although I hadn’t seen her in years, the idea of her being frail or not standing in front of the stove with her long, cottony skirt billowing behind her while she clumped around in her clogs, means that the food world has lost someone vital and important. She was someone I deeply admired and I was fortunate to work in the same kitchen with her, and admired her free spirit and skill so much that I often told her over the years. Of course, she totally deflected any compliments, waving them away. But to commemorate her life and talent, I can’t resist giving her one last nod.

The Zuni Cafe Cookbook and the Legacy of Judy Rodgers (Eater)

What was Judy Rodgers doing at Zuni? Cooking for your friends (Jonathan Gold, LA Times) 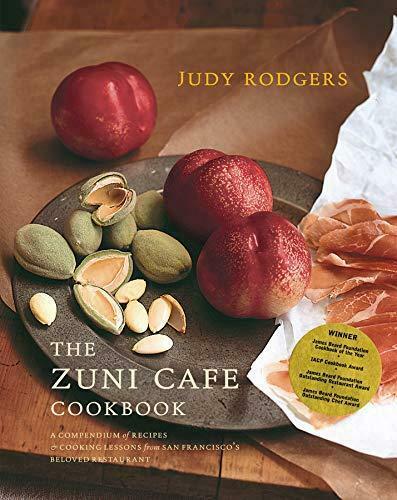