Saying No To Disposable Chopsticks 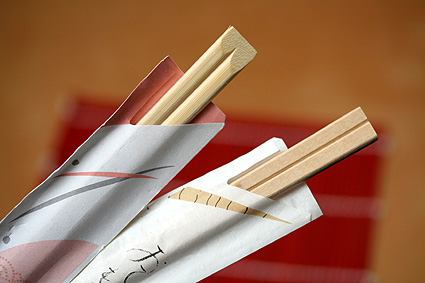 Over dinner the other night with a group of friends, I was talking about the excessive use of plastic bags in the world. I told them I easily recalled 20 years back, when traveling in Europe, it was just a given that you brought your own bag to the supermarket and shopping with you. Now, plastic bags are everywhere, but I like to re-use them.

Curiously, some vendors have told me I shouldn’t do that because of les bactéries.

Which I find even more odd considering they don’t think it’s pas hygiénique to rip open a clementine with their teeth, then hand over the sections for customers to taste.

Things are changing in Europe, like everywhere else, but when I told my friends that I used to bring my own chopsticks out to dinner with me in San Francisco, they looked at me like I was nuts.

I didn’t have the statistics in my head at the time, but later read that Japanuses 25 billion pairs a year and China uses 45 billion pairs. And other countries go through their fair share as well. But no matter where you live, the fact remains that disposable chopsticks are made by clear cutting forests for the wood, causing irreparable harm to the environment.

“Do you really think one person bringing their own chopsticks will make a difference?” I was asked.

So I decided that I’m going to bringing my own chopsticks with me when going out to eat again. And I’m posing the question to you: What do you think?

Do you think it’s odd to bring your own chopsticks instead of using the disposable ones?

Does anyone else out their bring their own?