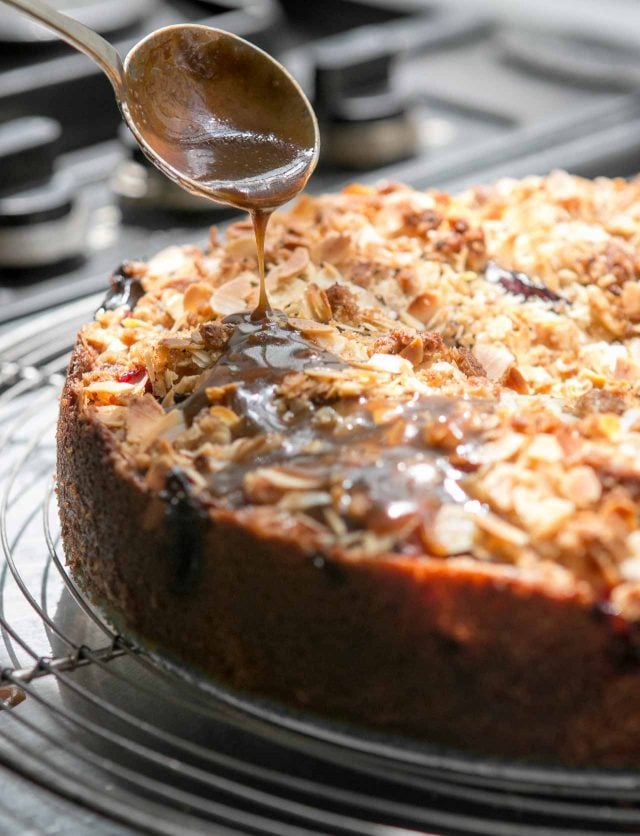 I came up with this cake almost fifteen years ago because I was looking for ways to use all the plums that we had when I was living in California. Northern California becomes plum central during the summer, with thanks going to Luther Burbank who developed a lot of varieties of fruit in the region, including the Santa Rosa plum, named after the town in California where he did his tinkering. 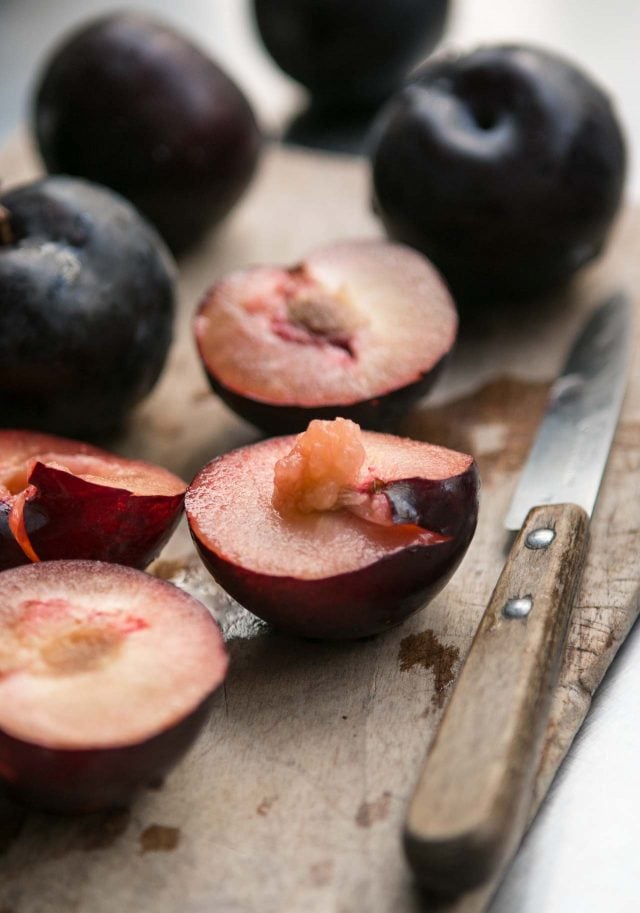 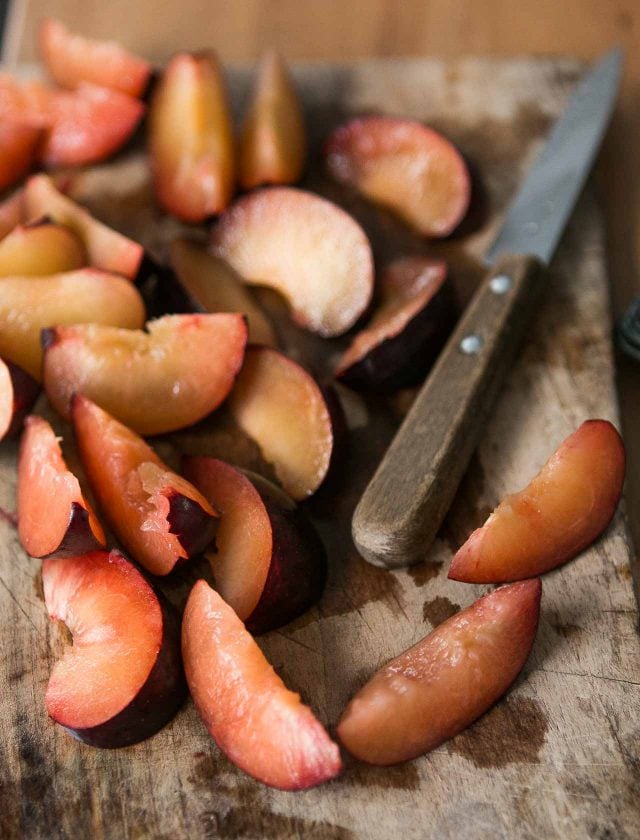 To this day, come summer, I go plum-crazy when I see purple plums at the market and always grab a bag. Purple plums aren’t as popular in France as their sweet, golden counterparts, mirabelles, or Reine Claudes, which I love for eating. But for baking, it’s the big, tart purple plums that I search out for their tangy acidity.

Romain has adopted my habit of nibbling cake at breakfast. (He’s also discovered crumpets from the Marks & Spencer stores that have been opening in Paris.) He was confused about the cake, since it doesn’t quite fit the French definition of cake. They like to categorize and define things, and this one doesn’t quite fit into the classic description of a gâteau, but he’s learned to expect a curve ball here and there. And after several minutes, he let it pass. 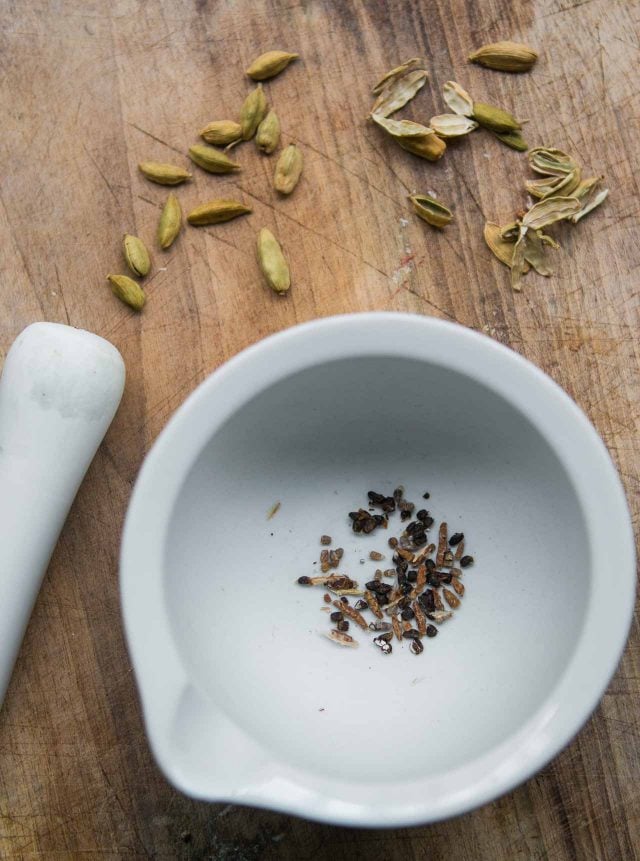 This cake uses cardamom in both the batter and the streusel almond topping. I buy the cardamom in pods and remove the husks, then grind the seeds myself. The flavor is much better than buying pre-ground cardamom. If you wanted to use another spice, whatever favorites are in your spice drawer, you could certainly call into play. I do like the cardamom a lot, though, and urge you to try it. 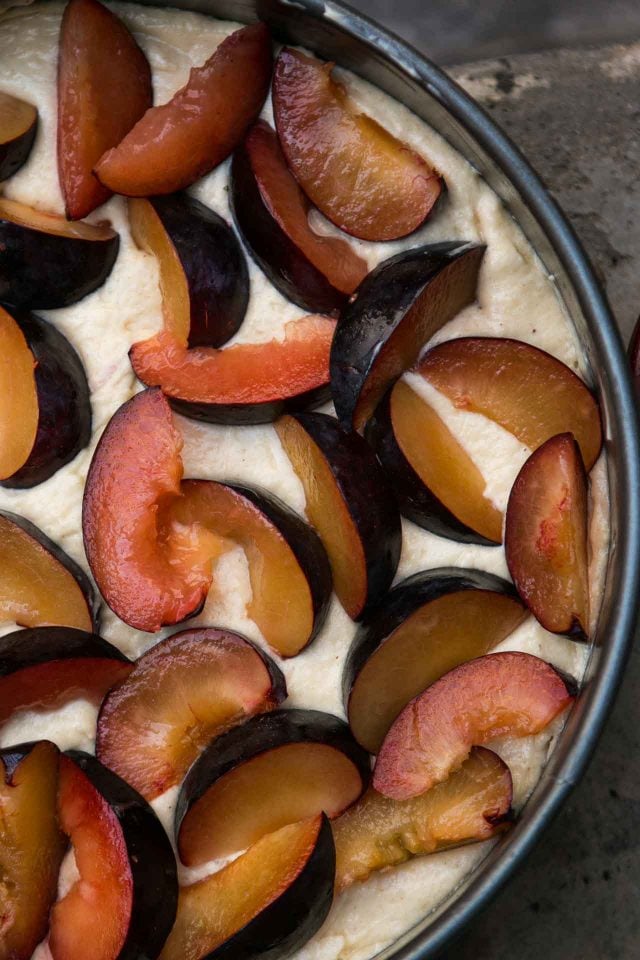 Am not sure how long the purple plums are going to hold out at the market. Come mid-summer, the markets in Paris become sparse as people take off on their annual vacations, including the vendors. And they are probably going to disappear soon, just like this cake did! 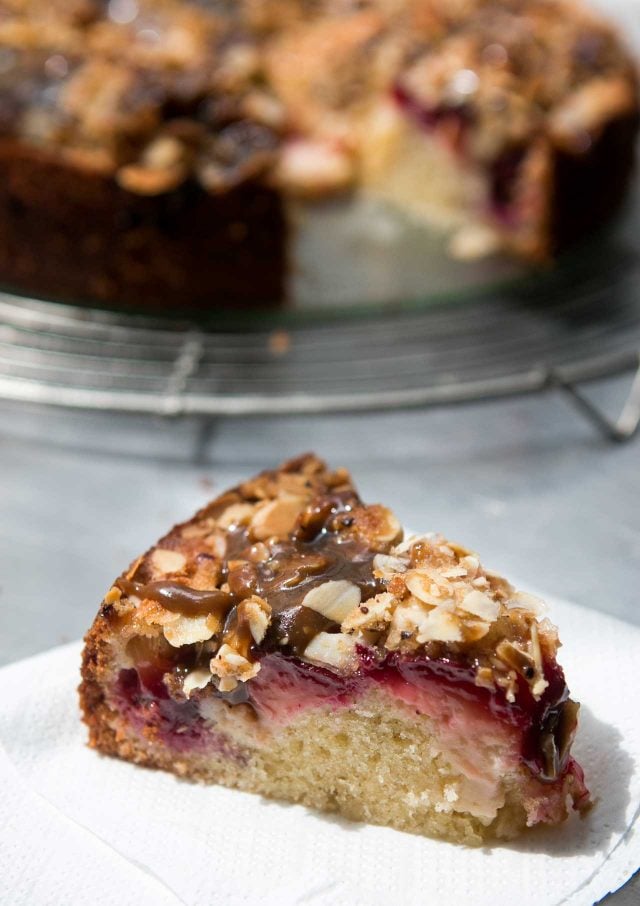 Purple plums aren’t usually sold by variety in France, but tart ones work best, such as Santa Rosa plums. You could use other kinds of plums, such as Italian prune plums (quetsches), although I prefer to use the tartest ones I can find. If you wanted to experiment with other types of fruit, this cake probably lends itself to others. The toffee is drizzled over the top in a modest quantity. But if you are a toffee-lover, you can certainly double the amount and really go for it. Buttermilk is called lait ribot or lait fermentè in France and is available in some supermarkets and Arab markets. You can make a good substitute by using a scant 1/2 cup (125ml) of whole milk with a teaspoon of lemon juice or white vinegar added. Let stand for 10 minutes, then use the soured milk just like buttermilk.