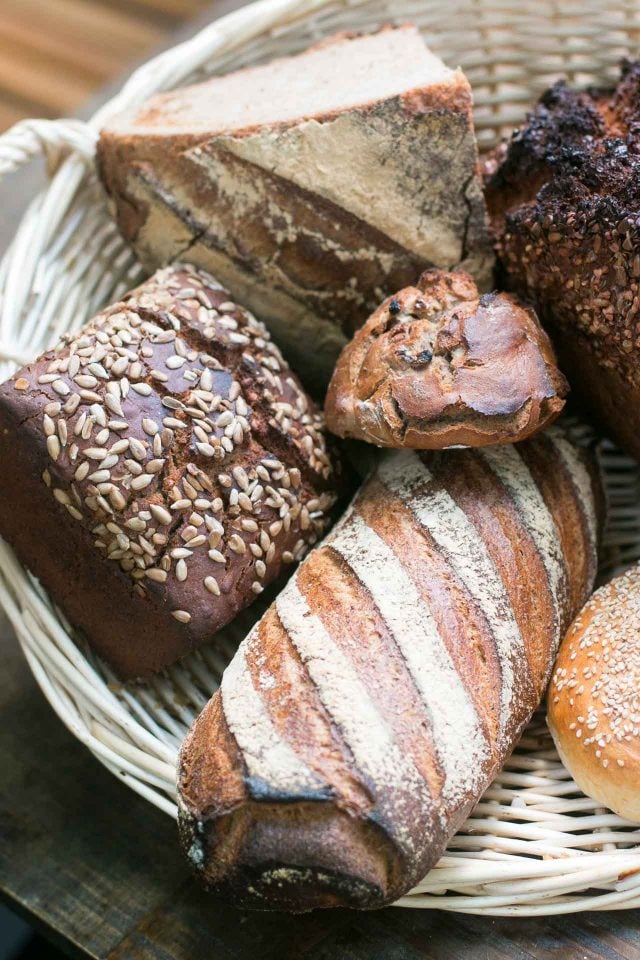 I used to cross Paris to buy a loaf of bread. That was when I was more of a débutant and kept a list of bakeries that I wanted to visit, and I’d make it a point to check off as many as I could, to try their bread.

But few in Paris go farther than their local boulangerie to get their bread. Since it’s something you do almost daily, one goes to a place that’s convenient. An added bonus is that like most places in France, when the staff gets to know you, they will bend over backwards to help you. So you ask them for the darkest baked loaf of pain au levain, you’ll get it. Or they’ll rifle through the basket to pick out your baguette for you, baked just as you like it.

I’ve been part of extended conversations with clerks who will show me the different baguettes, cooked to various degrees, while I give them the oui or non – until they Goldilock’s-like pluck out just the right one. No matter how many people are waiting behind me, they accept it, because when it’s their turn, they’ll do it too. 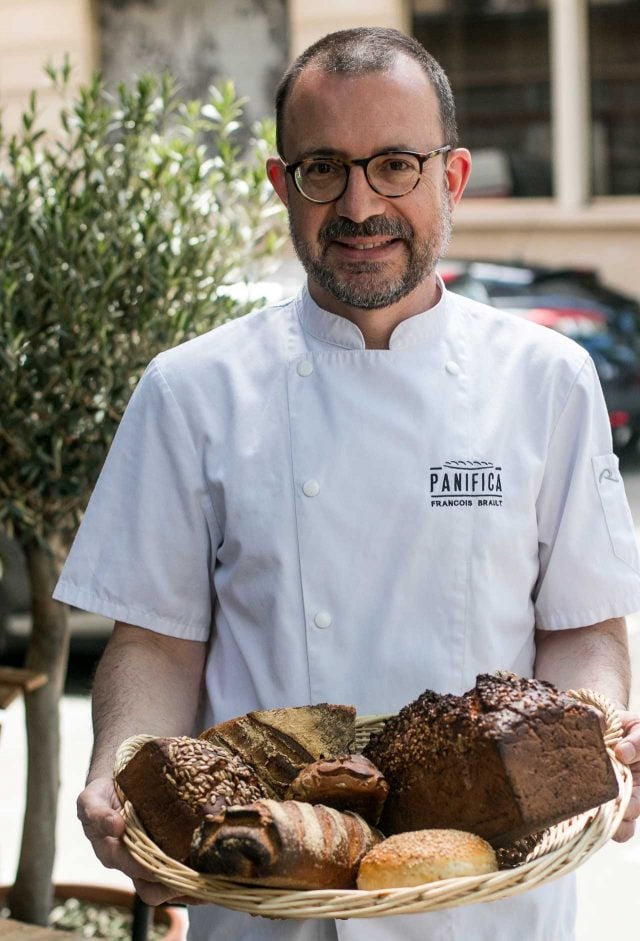 You don’t need to do that at Panifica because all the breads are bien cuit (well-cooked) and the owner and head baker, François Brault, told me he doesn’t do any breads that are pas trop cuit (not well-cooked), because he doesn’t like them, and that was a sign of bad bread. I have to agree. And so do plenty of others, you’ll notice, when you walk into his bakery and see the line of people waiting to buy his marvelous breads. Most seem to live in the area, but this is one of the bakeries in Paris that’s worth crossing town for if you don’t. 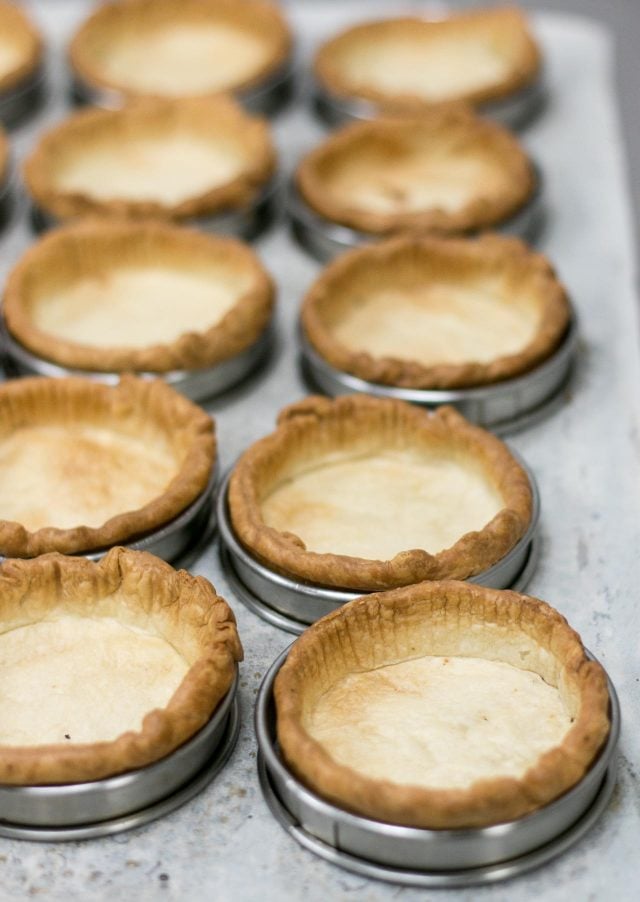 I’d been meaning to go for a while, trading messages with François while I navigated the waters of l’administration, begging off a visit while tackling the mountains of paperwork that have a tendency to pile up if I don’t feed/fend it off daily. And there’s a whole bunch of other stuff that’s always standing in the way of my mission here (namely, to eat chocolate, bread, and cheese), so I finally took a breather from everything, shut my front door behind me, and did the martyr’s walk to up Montmartre, to meet him at the bakery. 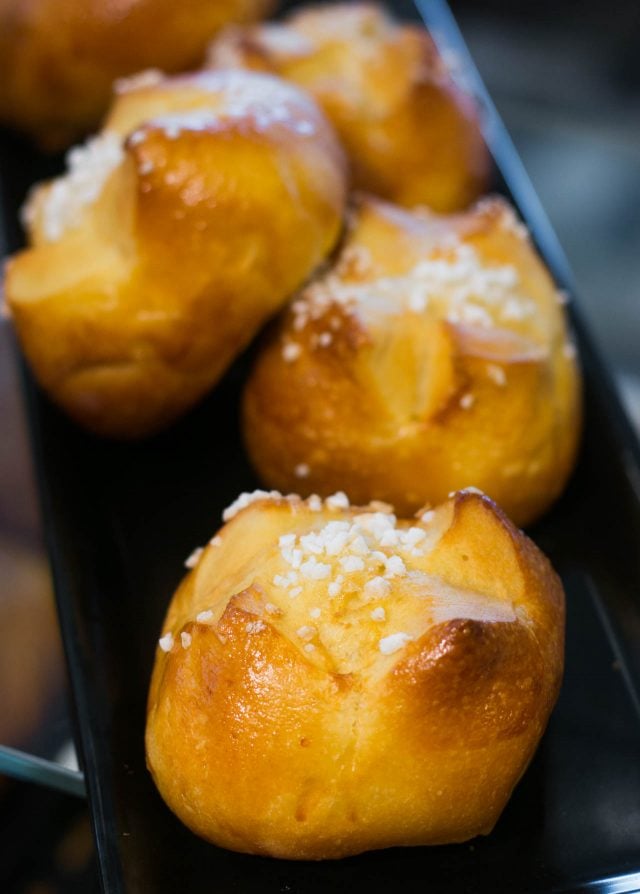 It was a fantastic sunny day in Paris and I was jealous of all the people eating at tables outside, overlooking the shady avenue. But they were probably jealous of me because François took me down to their kitchen where to show me where they bake the bread. He and his crew were done for the day (they start at 4am, which is a little too early for me…) but I got to feel the doughs, see the ovens, and talk about French flour and all the grains that he uses, some of which you don’t normally see in Parisian bakeries. 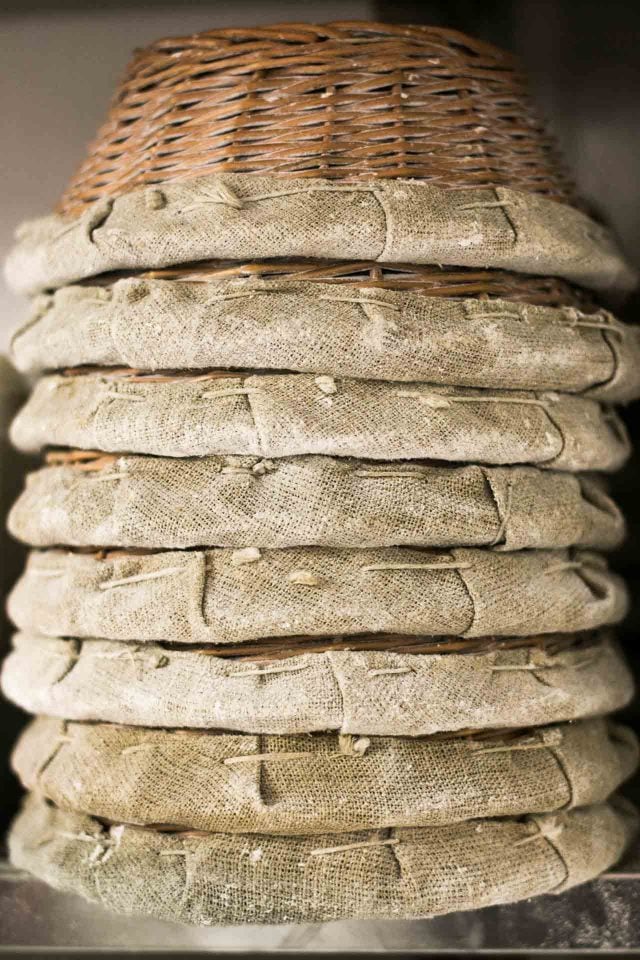 All the flours and grains used in the bakery are organic. But since taste is most important, the bakery uses a very high-quality traditional French butter for their croissants and other pastries, which is because he couldn’t find an organic butter that tasted as good as the one he uses.

When we came across one of the many flats of eggs in the bakery, he said he wanted to talk to my readers about egg storage, which I often have to assuage visitor’s fears about, because the French store eggs at room temperature. François told me that was possible because they don’t wash and sanitize eggs in Europe, leaving their natural protective coating on then, which gets stripped off when they are washed. So the eggs keep just fine for weeks at room temperature. He did wash his hands thoroughly with soap and water after handling them. “Mais, oui…” he said, as he scrubbed them clean, “Of course…” 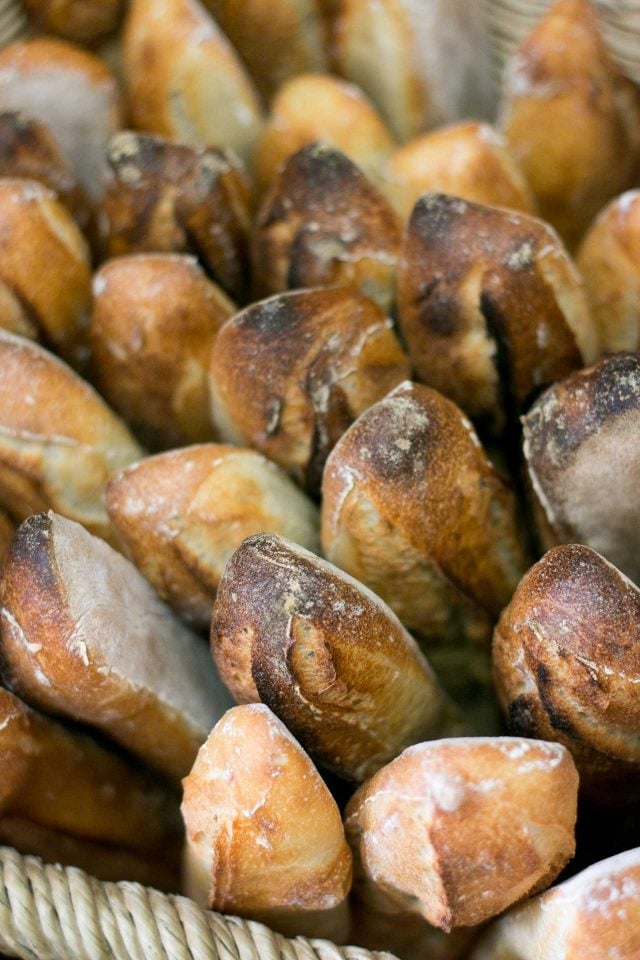 Most bakeries in France make very little on baguettes (I’m told the profit is about 30¢ each), so he decided to just sell them for €1 each and just let everyone have a “deal” on them. Even though (like Gus), François worked in the financial world before, he decided to switch gears and roll bread dough, rather than manage the other kind of dough. Which I’d say he’s doing pretty well at. 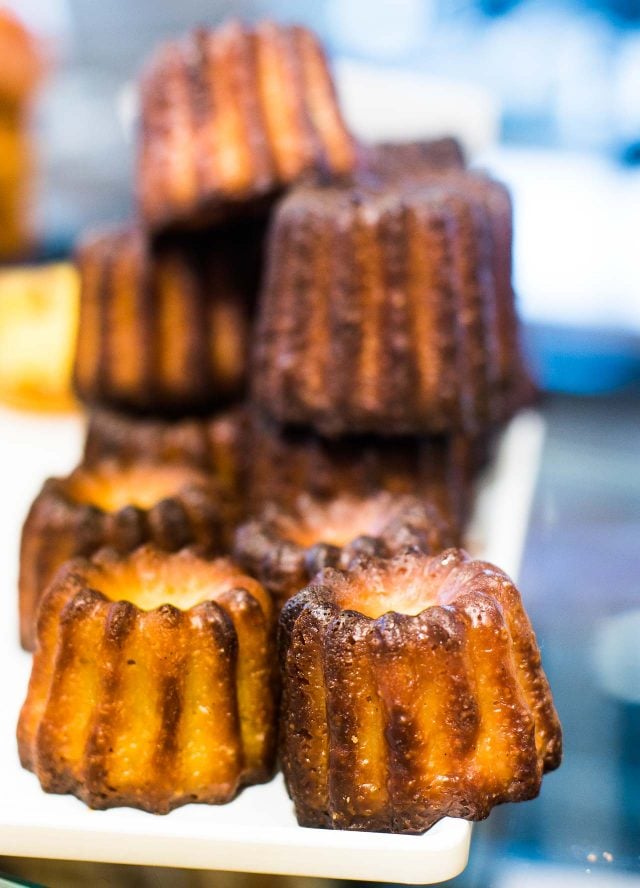 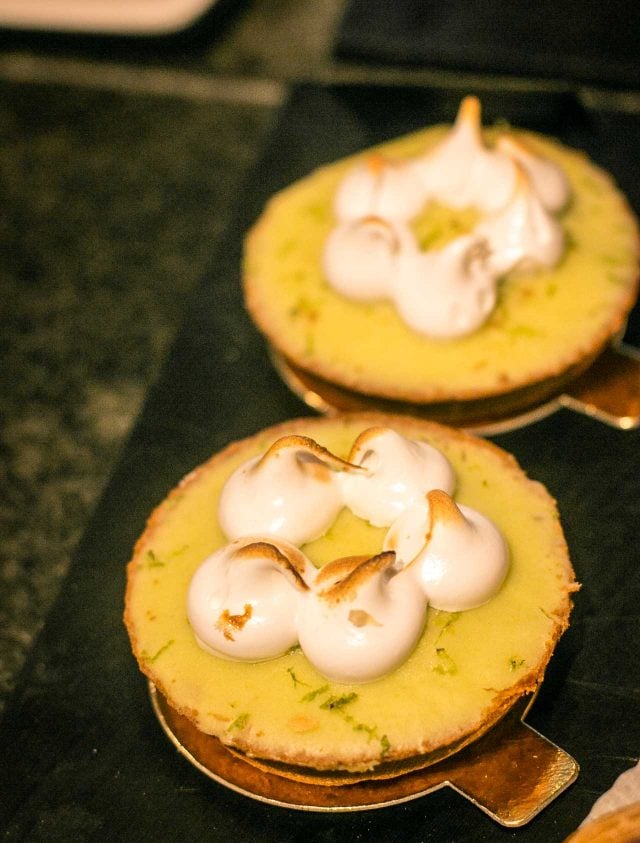 But the focus at Panifica, and what I was there for, was the generous selections of earthy breads lined up behind the counter and in baskets. 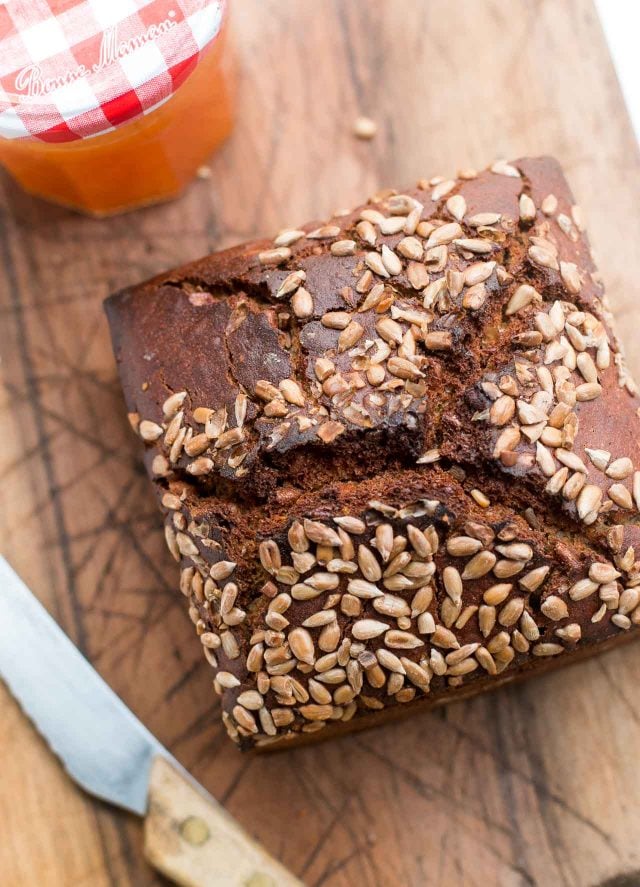 Tourte de meule is made with a high percentage of whole-wheat flour, and smaller loaves, meules au lin, have flaxseeds kneaded in, whose oil gives them loaves a softer crust. I generally prefer crusty breads but was curious and took one home and served it with tarama that night, and it was a big hit. 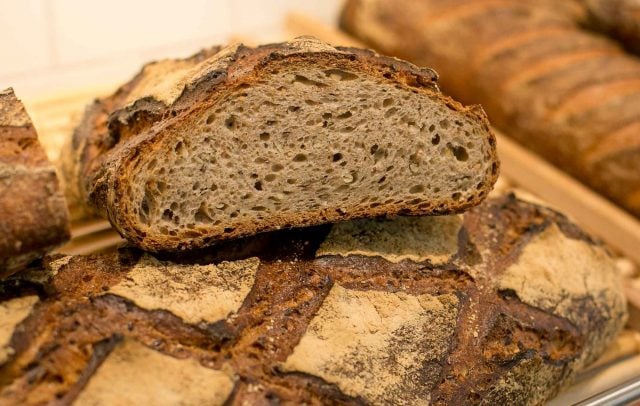 Tourte aux Alouettes (above) has whole-wheat and rye flour, as well as crunchy whole grains riddled throughout. I took a stub of that home as well, which was breakfast the next day, excellent toasted and slathered with salted butter and dark honey. 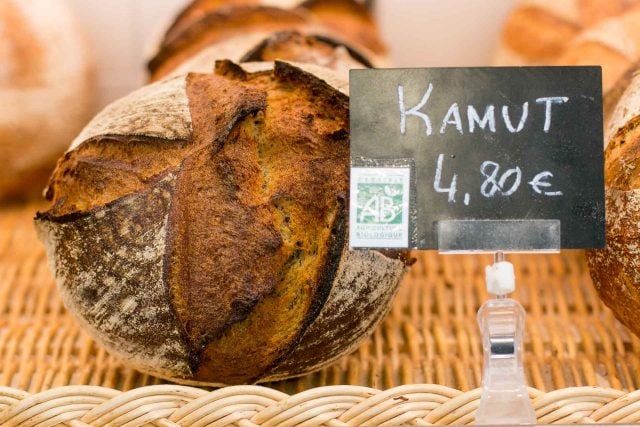 Compact rounds of kamut bread are made are with 100% kamut, an ancient wheat that’s not used very much in bakeries around town. But my favorite kinds of breads are those that are packed with grains. He makes two. The Norwegian (below) is a blocky loaf of spelt, rye, and whole grains, with a touch of molasses.  And smaller, perfectly square loaves, Suedois (Swedish) are made of buckwheat and sunflower seeds, which are baked on top and inside each loaf. (If you live in Paris, or you don’t have to worry about baggage allowance, the bakery sells their organic buckwheat and wheat flours by the bag. And the price is the same as supermarket flour.) 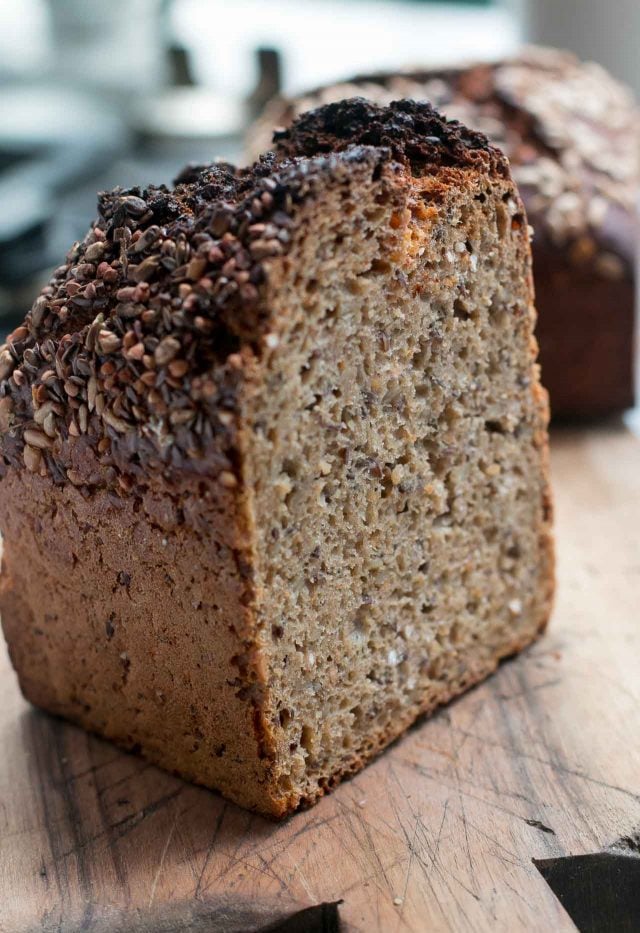 Many people are interested in low- or no-gluten breads, or breads made with alternative grains, and the François offers up a few different types. Petit épeautre bread is make with einkorn and some of the grains are toasted, to enhance their natural sweetness. 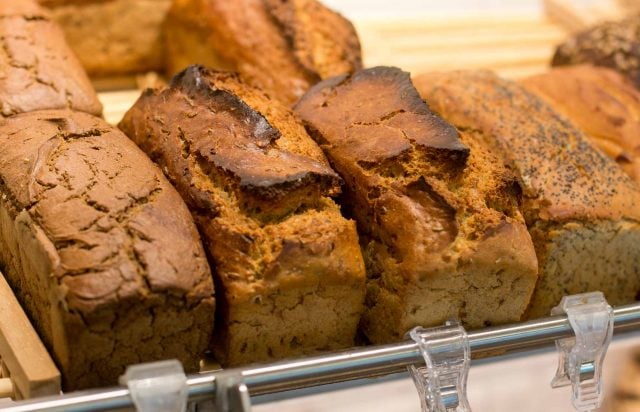 Being France, of course buckwheat is represented in Sarrazin (the loaf on the left), made of 100% buckwheat and using a buckwheat levain (natural yeast) which is gluten-free. François told me that was a very popular bread in the neighborhood, nodding his head in affirmation.

But the beauty of the breads also extends to the outside of the bakery, where I can’t imagine a better place to eat on a nice day. (Weather permitting.) The bakery has a super-fancy Swedish bread slicer that allows them to cut the breads extra thin, to make triple-layer sandwiches. Some are filled with smoked salmon, other with roasted vegetables. Focaccia sandwiches are on offer, as are quiches. 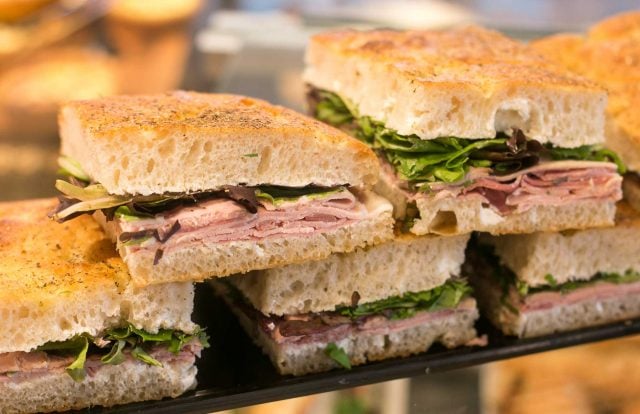 For dessert, although I didn’t try any, because my bag was loaded up with bread (because who knows when I’ll ever be able to leave the house again…now that I’m on a book deadline), I spotted roasted fruit salads, a creamy panna cotta with rhubarb, le cheesecake, silky chocolate tartlets, and a few Kouign Amanns left after the lunchtime rush, ready to go. 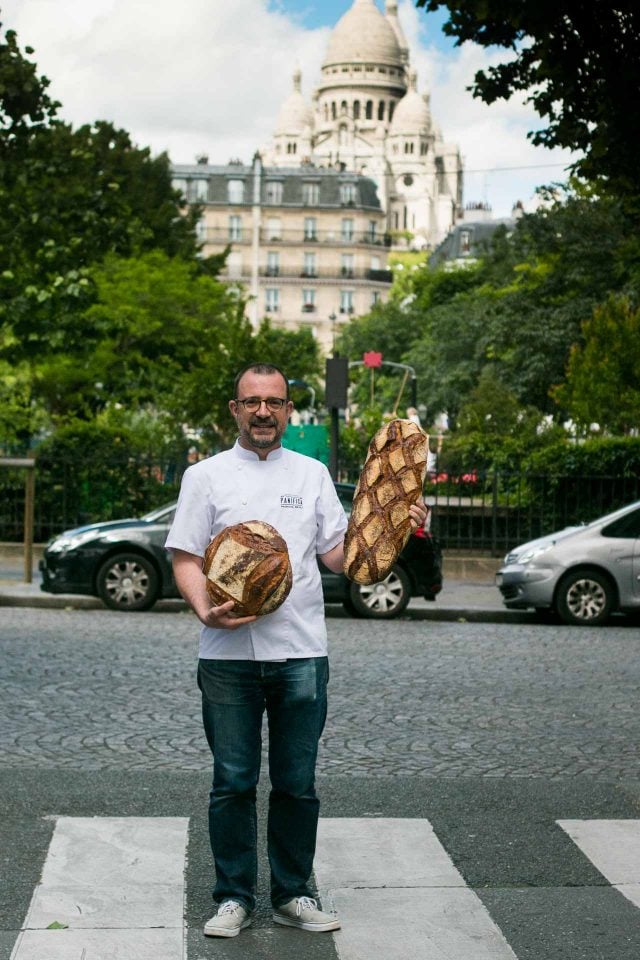