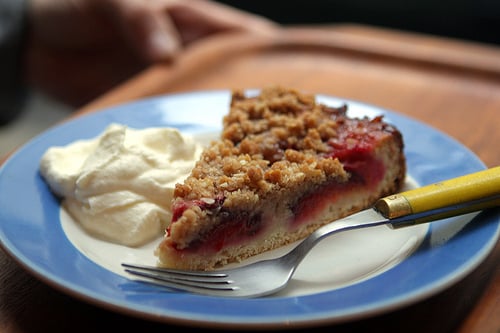 I’ve gotta say, I’ve taken a few dings for not presenting only the best parts of life in a foreign city. People may, or may not, want to hear about dealing with cranky cashiers, rigid administrators, or worse, paper-thin bath towels, instead wanting a perfect story of life in an apartment with a balcony, and watching sunsets every night over chilled glasses of Champagne, toasting yet another day in paradise. Invariably, however, almost all those “love letter-style” books end with the author moving back home in the final chapter or epilogue. And I always wish I’d hear the real story about why they stayed, or why they left.

In My Berlin Kitchen, Luisa Weiss of the terrific blog, The Wednesday Chef, explains it all. She was born in Berlin, and although she lived in several other places, including Paris and New York City, there was a strong connection to Berlin that kept drawing her back. Berlin is a very interesting place. It’s not very glamorous, but has a certain charm in the old, faded buildings, rumbling streets and subways, and sprawling parks. For years it was a city divided, then reunited. However one feels a bit of the scars of the past as the city still struggles to find its footing. 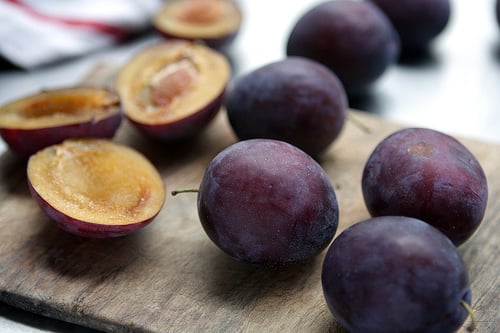 Luisa loved New York, but wasn’t so smitten with Paris, where she studied. And she found the omnipresent tristesse of Paris -“the sadness” of Paris, as it’s called, rather difficult. And in spite of the beauty of the city and her fluency with the language, she was frustrated by administrative barriers she faced. And she didn’t have someone to share those long, leisurely walks with her along the Seine to walk them off with, either. But in New York, that loneliness was diminished by the swarms of people and the casual friendliness of the people around her.

But something tugged her back to Berlin, and it was love. It was a deep love of the city and a romance that was kindled in Paris with a Berliner. So she finally moved back, once and for all, and continued cooking and baking, to make Berlin “home” for her, at last. It wasn’t all perfect and she had to get used to “hatchet-faced” bus drivers and the stern and disciplined way of doing things that is foreign to people who’ve lived in cultures with more fluidity. 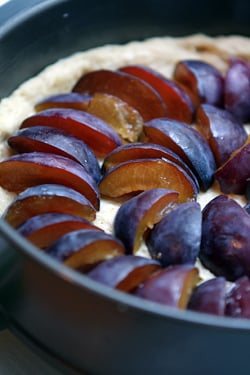 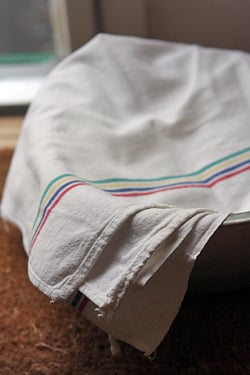 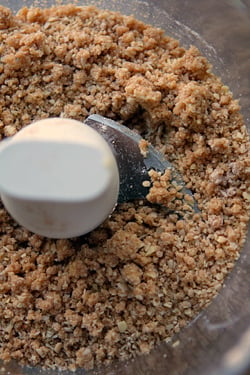 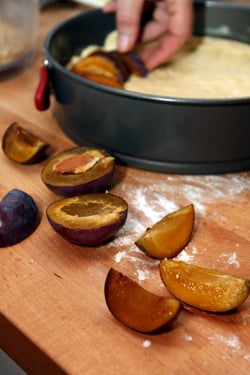 Each chapter of the book ends with a recipe, and the chapters tell stories of shuttling back-and-forth between Europe and America, and the customs of each. Although the book is a terrific read, it’s nice to find recipes for German desserts that are explained in clear terms for home bakers because many of them simply don’t get their due. Luisa edited cookbooks for many years and I like the friendly, reassuring tone she used as she wrote them.

Each recipe makes you feel like you are being talked through them, with her by your side in her kitchen, and I’m hoping to tackle the Basler Leckerli, a Christmas cookie that I’ve had some difficulties with, and a simple Früchtebrot, a dried fruit and nut cake with figs, dates, and a substantial pour of dark rum to keep everything moist, that also sounds perfect for the holidays. 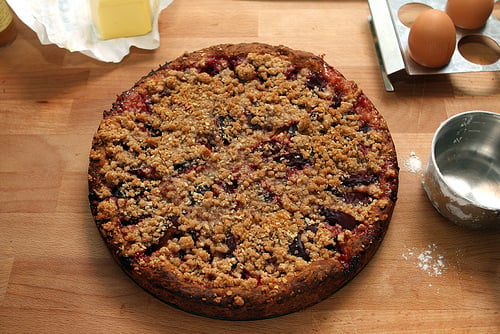 One thing that France and Germany…and even Americans across the Atlantic, share in common is a love of quetsches, otherwise known as Italian prune plums or simply ‘prune plums’. The Germans make yeasted kuchens out of them, a hybrid cake-tart, which don’t rise as high as a typical American cake and is much less-sweet, making it appropriate for a breakfast treat or an afternoon imbiss (snack). My German isn’t as fluent at Luisa’s (actually, it’s pretty nil, and I hope I didn’t spell ‘imbiss’ wrong), and while I’m sure that kuchen translates to cake, like moving to a foreign country, I don’t want folks to set their expectations too high – so I’m calling it a tart.

Quetsches are usually the last of the summer fruits to linger around longer than the others. In France, we get them at markets through October, then they disappear. I grabbed a bag at the market and brought them home, mixing up the simple yeasted crust and baking a tart from them, with thanks to Luisa for the recipe from her Berlin kitchen, to mine. 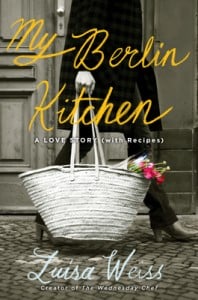 Recipe adapted from My Berlin Kitchen (Viking) by Luisa Weiss. One could argue (and if you’re German, win the argument) that this is more of a cake than a tart, which is what Luisa calls it. In her original recipe, she tops the cake with 3 tablespoons of sugar mixed with 2 teaspoons of ground cinnamon, but says it’s also common in Germany to use a streusel topping. So that’s what I did. However if you want to make the original recipe Luisa presented it as, drizzle 3 tablespoons of melted butter over the plums and sprinkle them with the cinnamon sugar rather than use the streusel topping, in Step #5. This tart is on the less-sweet side because prune plums aren’t super-sweet although they are traditional for this pastry. Prune plums are also less-juicy than regular plums and I’m looking forward to trying it with other varieties, when they’re in season.
Dough and plum topping
1 1/2 cups (225g) plus 2 tablespoons flour
2 teaspoons active dry yeast, or 1/2 ounce fresh yeast, crumbled
1/2 cup (125ml) whole milk, divided
3 tablespoons sugar
1 large egg yolk
3 tablespoons melted butter, cooled to room temperature
pinch of salt
grated zest of one lemon
1 1/2 pounds (700g) Italian prune plums, pitted and quartered
Streusel Topping
3/4 cup (50g) sliced almonds
1/2 cup (70g) flour
6 tablespoons (70g) light brown sugar
2 tablespoons granulated sugar
1 teaspoon ground cinnamon
2 ounces (55g) unsalted butter, cubed, cold
pinch salt
1. Butter a 9- to 10-inch (23 cm) springform pan.
2. Add the flour to a mixing bowl and make a well in the center. Add the yeast and half of the milk as well as the 3 tablespoons of sugar. Mix the liquid ingredients with a spatula, incorporating just enough of the flour to make a wet paste. Let sit 15 minutes.
3. Stir in the remaining milk, egg yolk, 3 tablespoons of melted butter, salt, and lemon zest, and mix everything together well. Knead the dough on a lightly floured surface until smooth. Shape the dough into a smooth ball and put in the buttered cake pan. Cover with a kitchen towel, and let rise in a warm place for 1 hour, until doubled.
4 While the dough is rising, make the streusel topping. Put the almonds, flour, brown and granulated sugars, cinnamon, and salt in the bowl of a food processor and pulse until the almonds are broken up. Add the 2 ounces of butter and salt and process until the mixture first becomes granular, then begins to clump together.
4. Use your fingers to smooth the yeasted dough across the bottom of the pan and about an inch (3cm) rim up the sides. Place concentric rounds of prune plum wedges over the dough, within the rim, pushing them close together.
5. Strew 1 cup (120g) of streusel topping over the top (there may be a bit leftover) and let the dough rise 20 minutes. Preheat the oven to 350ºF (180ºC).
6. Bake the tart for 45-55 minutes, until the streusel topping is golden brown. Remove from the oven and let cool.

Serving: One could serve this tart with sweetened whipped cream or vanilla ice cream If you want to jazz it up, some raspberries or raspberry sauce would work nicely with the plums.

Storage: This tart/cake is best served the day it’s made. However it will keep a couple of days, at room temperature.