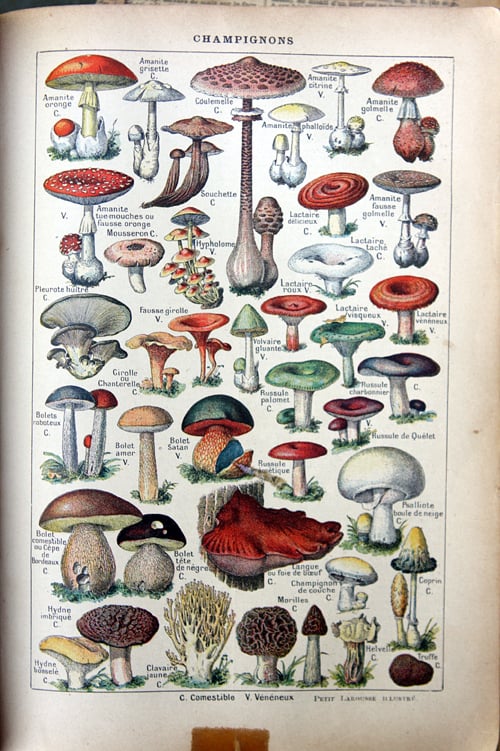 Someone told me that the English language has more words than the French language, which I don’t believe – although to be honest, I’ve never counted. I know English can be kind of kooky at at times, but I don’t think we have multiple words for the same things, from a dozen different words for sinks, to a panoply of words for helmets, depending on what vehicle one is sitting on when wearing it. 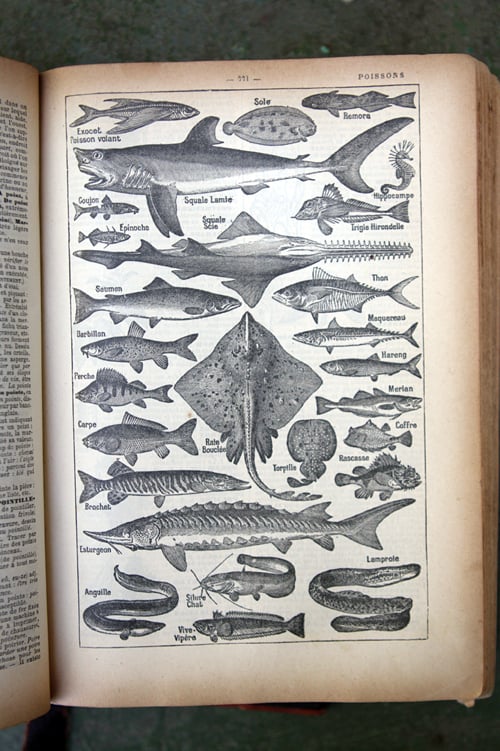 However I can attest that there are, indeed, fourteen verb tenses in French versus six in English, which is why I always get my derrière whooped when I play Scrabble in French. According to my handy book of French verbs, many of the verb conjugations are ‘mood related’, to express how someone feels. So je suis (I am) becomes je sois, because you or more to the point – I just absolutely, positively, have to be.

And then there’s the fact that even in one particular tense, like when talking about the present, each verb is spelled differently. Whereas in English, we say I think, You think, We think, They think – spelling the word “think” exactly the same way – in French, each pronoun determines the way the verb is spelled, which changes each time. So it’s Je pense, Vouz pensez, Nous pensons. And yes, I did have to consult my book of French verbs to make sure I got those write. Er, I mean, right. (Gotcha! And you were about to pull that “grammar police” alarm. I told you English can be kooky, too.) So if you want to know why the French are nervously pulling drags off cigarettes, it’s because of the stress of conjugating all those dang verbs. 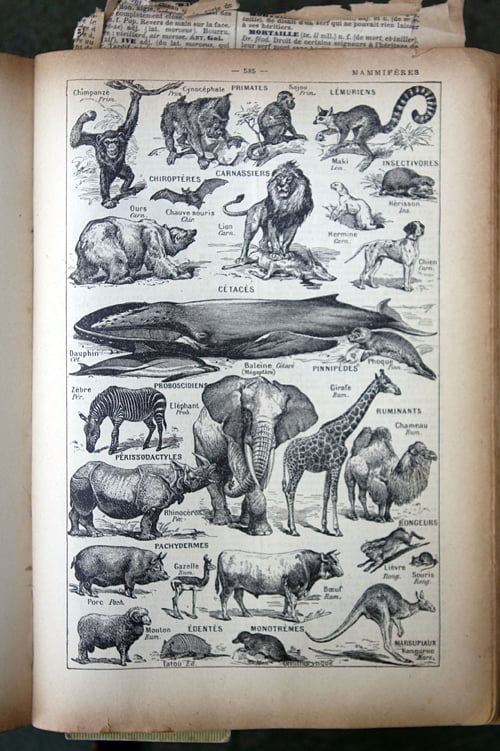 And I, too, am now considering lighting up every time I write anything in French on Twitter and elsewhere online. Because in my haste, while I’m jumping off métro trains or navigating crowds on sidewalks – toggling back and forth between French and English smartphone keyboards, there’s invariably a goof. And people have actually yelled at me in all-caps for making errors. Ouch!

Hence my now adamant refusal to write in any other language other than the language of Shakespeare. Plus I finally need glasses. As my eye doctor said during my last visit to her, “What took you so long?” So in addition to having my hashtags and smartphone messages spell-checked via crowd-sourcing, I don’t really need constant reminders about how old I’m getting. 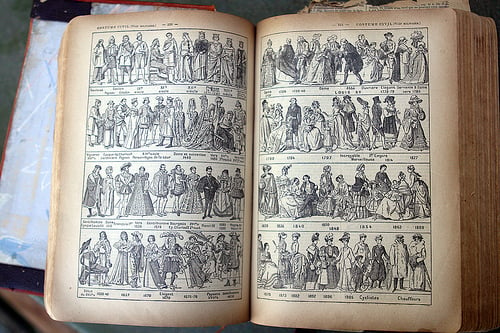 As I was writing something in French lately, for a less-public forum than here and there, I was looking up a French word up in my regular dictionary, one that boasts 120,000 French words, as well as a more modern one in app form, and didn’t find it. And I asked the four French people I was with and no one knew the meaning of the word either. 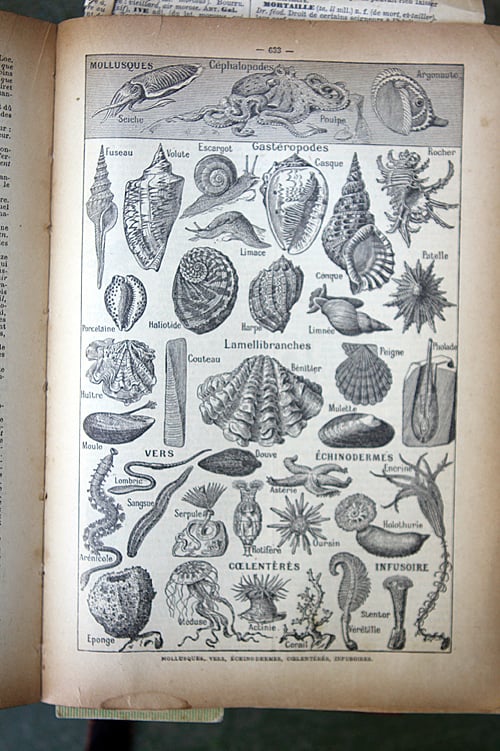 French women may not get fat, but their dictionaries certainly do, so I turned to a rather plump French dictionary from 1913, produced in accordance with the Institut de France, whose Académie Française oversees the French language, and whose board members – known as “the immortals” – scrupulously review any new words for consideration before being added to the French lexicon. 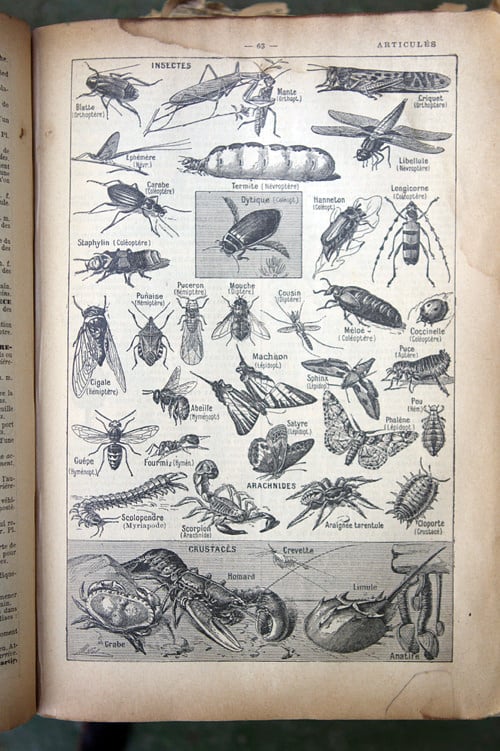 The word was grué, a word that is used to refer to pieces of roasted cocoa beans. And believe it or not, even though I use the word at least two or three times a day, the word wasn’t even in there – in spite of the fact that the French have been grinding pretty great chocolate well before 1913. 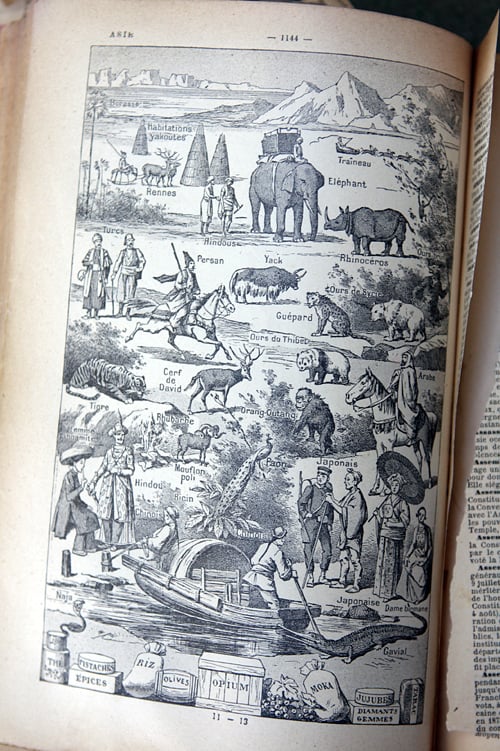 But as l leafed through that beautiful old book, I was reminded how much I loved actual page-turning dictionaries, especially old French ones, with their beautiful color plates and line drawings of everything from a cobaye (guinea pig) to saut, the great French pastime of jumping, in all its guises. 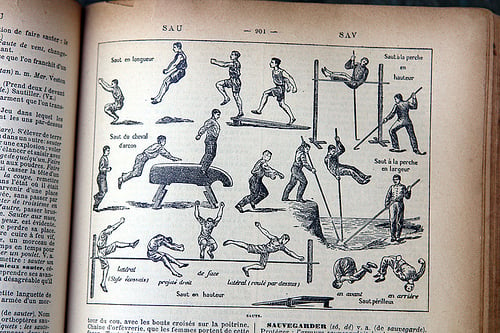 The first pages of the book have gone missing from years of wear. (Or perhaps torn out by a century by frustrated anglophone Scrabble-players?) So this particular dictionary now begins with the words Alcoolique, which none of who live in a wine-soaked country (which perhaps may be another by-product of the overload of verbs to conjugate) needs to look up. As well as Alkermes, a liqueur colored by ground insects – that you probably don’t want to ever have to look up either. 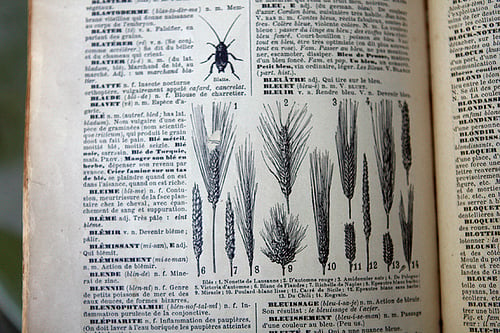 And interestingly, or tellingly, the last entry is for Zythum, which is described as a “beer that Egyptians make from fermented barley” – which is a word I’m going to have to remember to wow my French adversaries during our next Scrabble tournament. 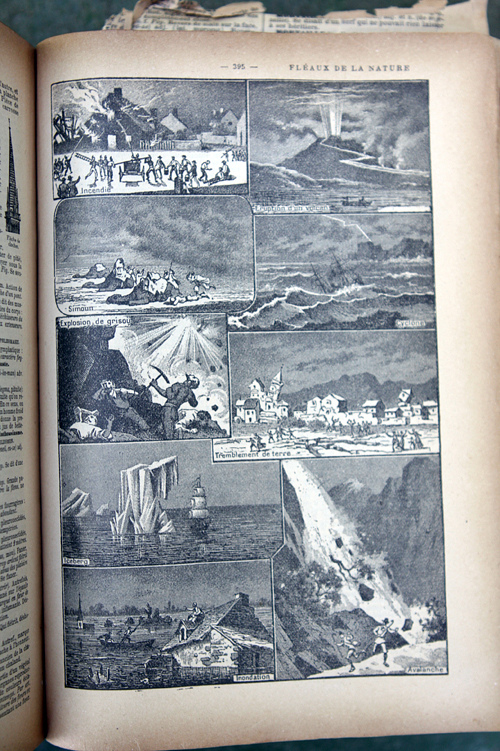 It wouldn’t be French is there wasn’t drama, and even more drama, with pictures of natural disasters. Yes, the worst is always going to happen. And yes, that’s why I fit right in. 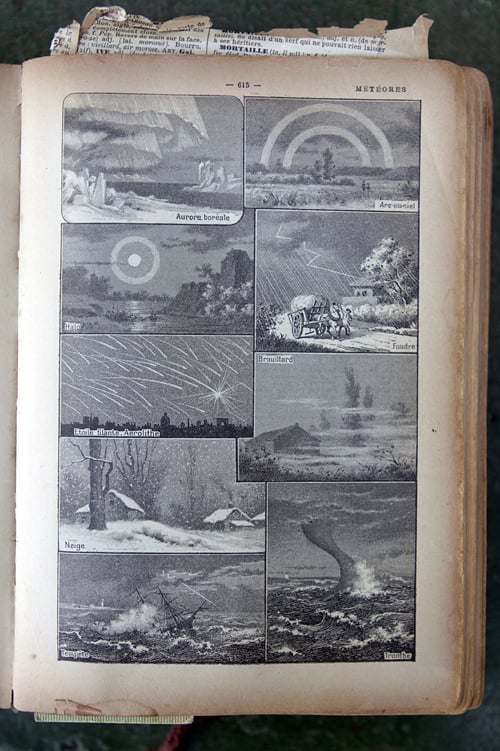 For those who are sportif, there are descriptions of gymnastic equipment, various types of fish, and mushrooms in one of the few color plates, probably because of the dangers involved in misinterpreting edible varieties from others. (fyi: Did you know that all pharmacists in France are trained to identify mushrooms, and can let you know which are edible and which aren’t?). And speaking of very-specific words there are chaffs of wheat, too.

And in case you want to know where you mushrooms, fish, and wheat go, once you swallow them, it’s in here, too. 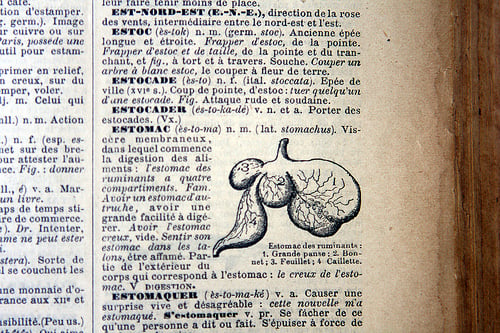 The biggest challenge in Scrabble is when you’re stuck with a “W” as there are very few French words that begin with that letter, hence that chapter is a mere page-and-a-half long. 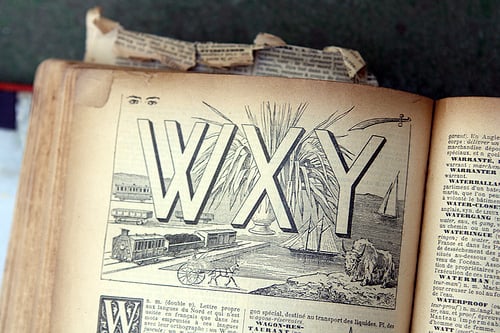 “Walkman” hadn’t made it into this 1913 version yet, obviously, but it’s in the newer French dictionaries along with a few other W-words, rounding the section up to a page-and-three-quarters for the W entries. If you’re every playing Scrabble, here’s a tip: Wu means Chinese money. I’ve tried to disqualify it on the basis that it isn’t French, but I get argued down. (Which also happens a lot around here. And not just online, ya know.) 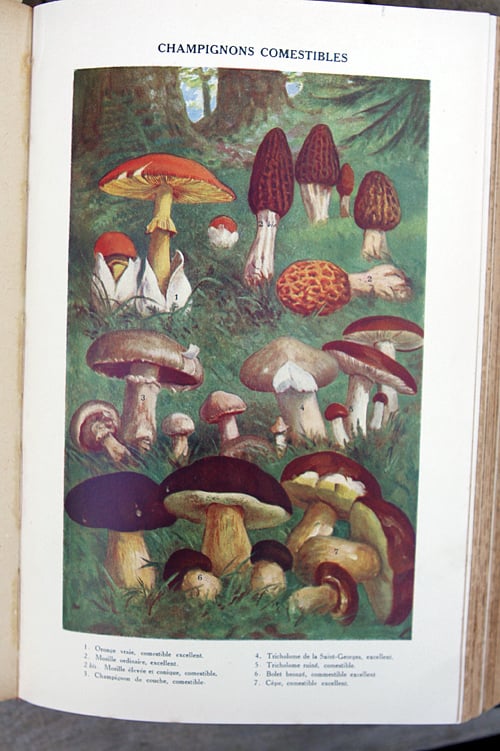 But man, every time I pick one of those tiles with a W on it, I feel like eating one of those mushrooms, or waving the flag of surrender. Thankfully, there are a (colorful) number of them to choose from. 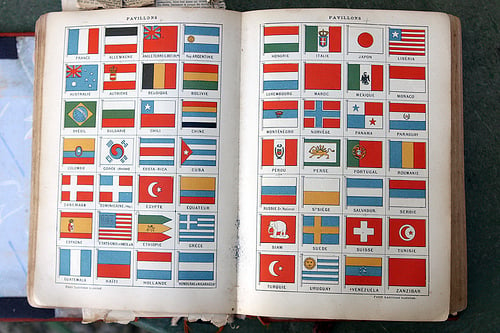 All that leafing through the French dictionary, I starting thinking about my Estomac, and decided it was time for dinner. And lo and behold, when I picked up a French cookbook from the cupboard where I was staying, I found that it contained a French culinary dictionary as well. 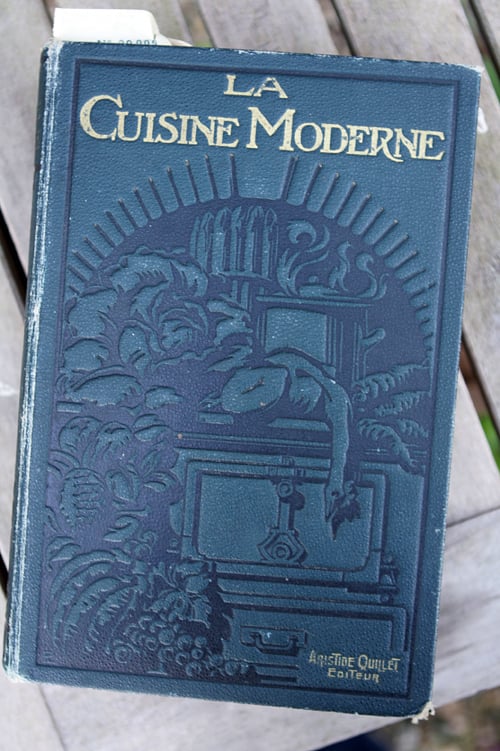 Although chocolate-winnowers would not be pleased that grué wasn’t in there either, there were plenty of others. I don’t think winnower in France begins with a “W“, but I am not going to spend the time looking it up in the dictionary because I’m pretty certain it’s not in there either. I guess I need to wait for a French chocolate-only dictionary to come out. 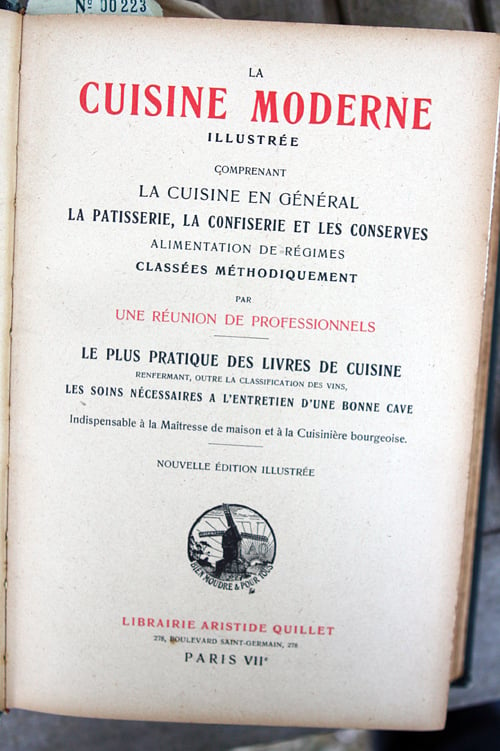 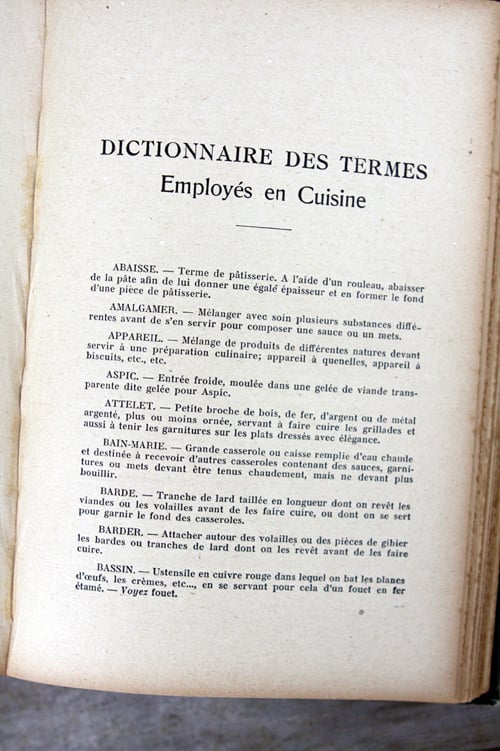 But vegetables are abundant on the colorful plates, each one identified, with recipes in other parts of the book. The recipes would drive folks who don’t understand a three sentence description for how to make onion soup, which doesn’t bother to say that you need to peel the onions, or precisely how thick to slice them, down to the exact millimeter. 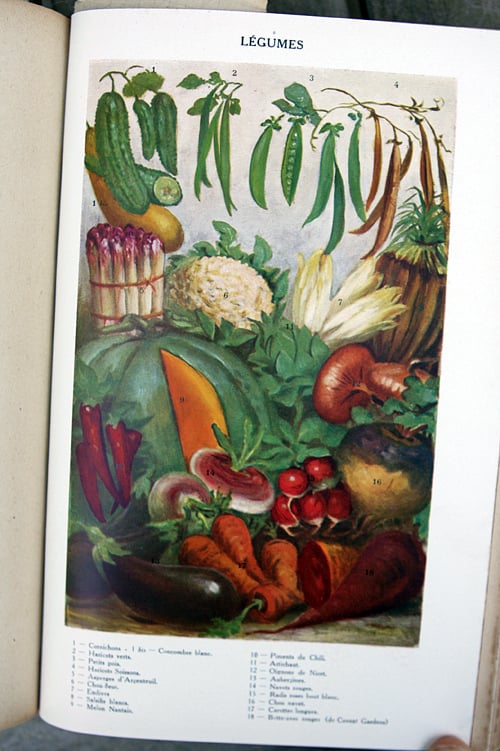 I love the colorful meat drawings which I’m thinking of printing out and handing to visitors to France who ask me which cuts of meat correspond with cuts of meat from their home countries. And they don’t because the meat is butchered differently. It’s like when I explain what violets are, which I think are considered crustaceans, and supposedly good for “men problems”, a point which a fish monger drove home with by raising his thick forearm in the air. I haven’t tried them yet because I’m still waiting to hear back if they’re covered by the French health care system. But I can let you know, if you must. 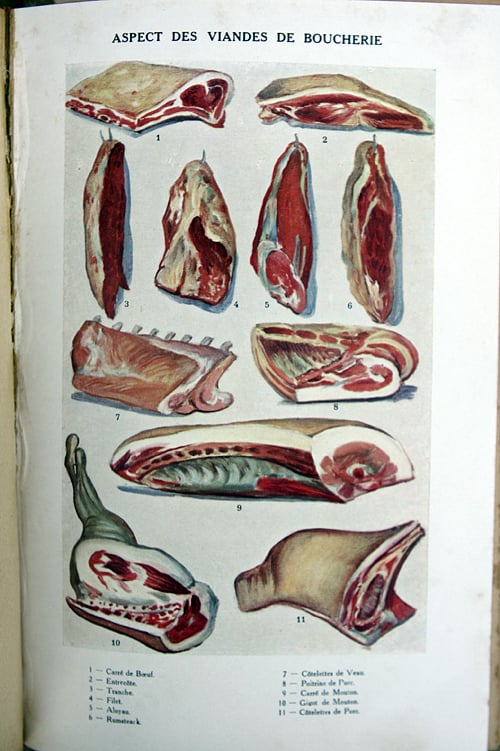 There are a lot of culinary terms, which seemed so specific, and so French. Until I remembered that in English, we have words like ecumer (skim) and “bard” for meat (and with apologies to those trying to learn English, as another English language oddity, the aforementioned Mr. Shakespeare was also known as a ‘bard’), and “winnow” for cocoa nibs. 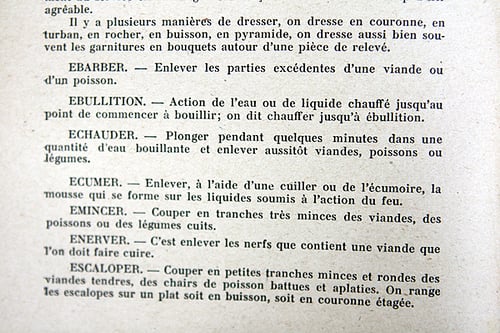 By now you’re probably wondering, “What are gibier?” Well, here ya go. It’s all the wild stuff that we eat in France, usually during the fall and winter, when it’s hunting season. The other night we had dove for dinner, which sounds like a mash-up between a soap and supper jingle, but I saw those winged critters at the market earlier the week. And a few days later, there they were, on my plate. 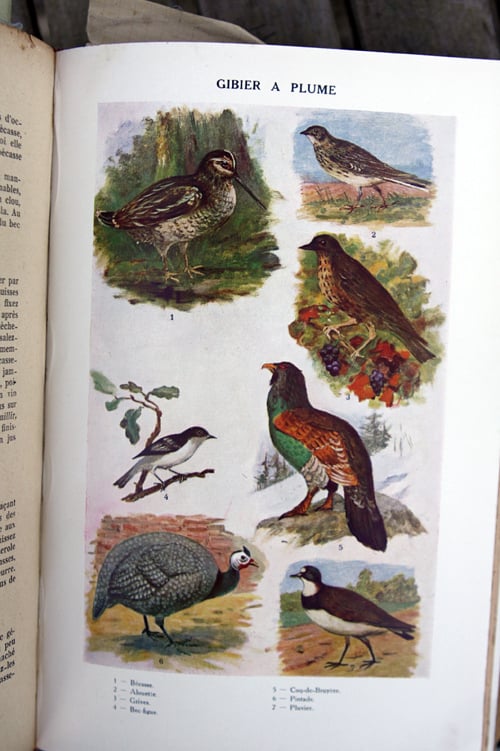 Fancier fare is depicted as well, in pièces montées, or showpieces, and it’s funny because in French, pièce usually means “room”, as in, an apartment that has three pièces. And I snickered at the market the other day when some visitor asked in halting French for three pièces of jambon. 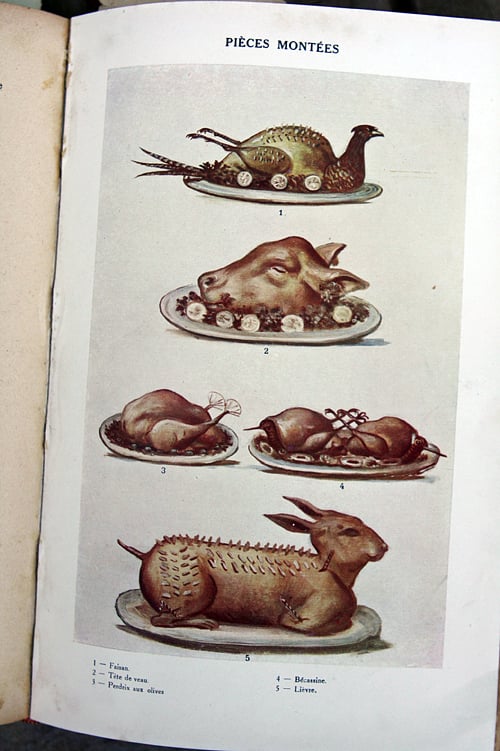 And while I wanted to say that he’d just ordered three rooms of ham, he’s probably reading this now and laughing at me since in addition to “room”, I later remembered that it does something refer to a piece of meat.

So how do you say “meat room” – pièce de pièce? 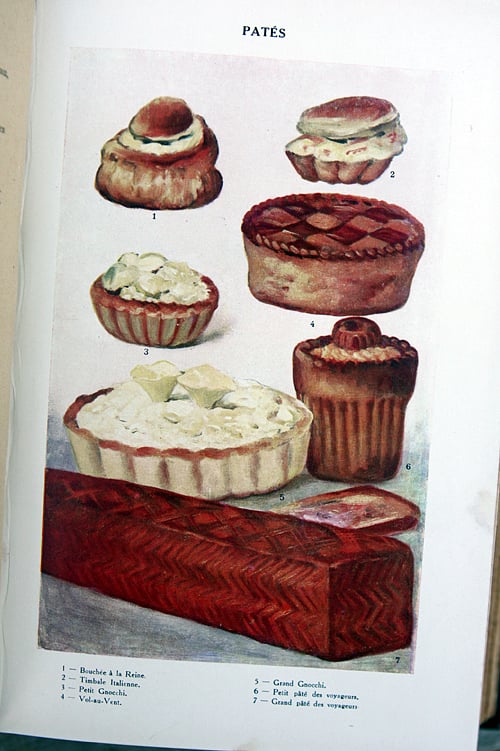 Finally there are pastries, in all their sepia glory. And savory pastries at that, undoubtably filled with pièces of meat, their fabrication winnowed from years of knowledge. And probably even back in their day, they cost quite a bit of wu, je pense.