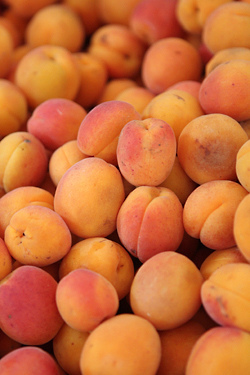 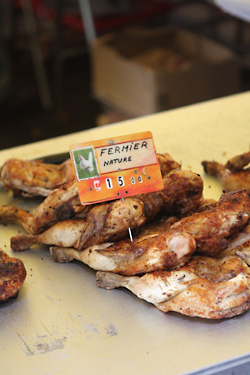 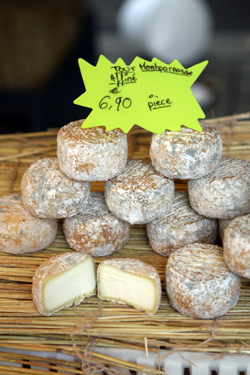 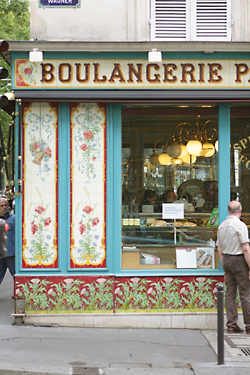 Summer was kind of a bust in Paris this year. True, I did spend three weeks away. But from what everyone told me, Paris was just like the city I came home to; gray and overcast. One of the rewards of living in Paris is summer. After surviving the bleak, cold winter, the payoff is sitting in outdoor cafés drinking cold rosé in the heat or engaging in un pique-nique with friends by the Seine, taking advantage of the extra long days.

Most businesses in Paris shut down for summer holidays, usually beginning around the end of July and re-opening later in August. In the past few years, since the economy hasn’t been so fabulous, more and more places have stayed open. Another factor is unrest in many French-speaking countries outside of France where the French have traditionally taken their vacations. Plus the weather hasn’t been so great in the rest of France either. So spending a few weeks on a chilly beach in Brittany or under the clouds on the shores of la Côte Basque isn’t everyone’s idea of fun. And as you know, many Europeans wear Speedo-style bathing suits and, well, let’s fact it – not many men want to be lounging around on a very chilly beach in a soul-baring swimsuit, myself included. 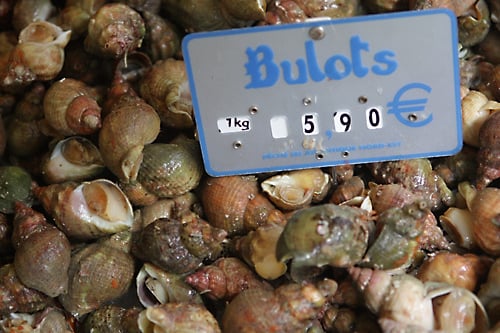 Yet the best thing about August in Paris is that it’s less-crowded and not insanely hot. (And quite a few of my Parisian friends say August is the best month in Paris because it’s “Paris sans les Parisiennes.) Although I lived in San Francisco for a few decades, where air-conditioning wasn’t necessary (because the city is naturally air-conditioned), when it’s hot in New York City, you just step into the subway or a shop and cool down immediately. In Paris, it’s harder to cool down as most places aren’t climatisée. And even if they are, the temperature remains tepid, at best. So it’s hard to complain about the mild weather when you’ve lived through a few heat waves. 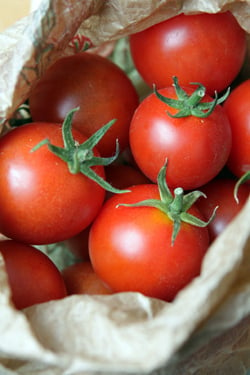 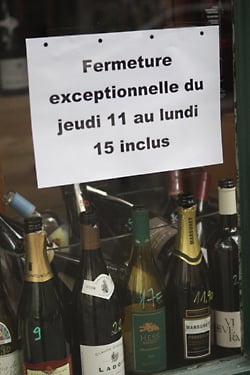 Another interesting thing about les congés, or “closures” is that bakeries by law are supposed to work in sync with either other in the various neighborhoods so that one remains open if the others are closed. 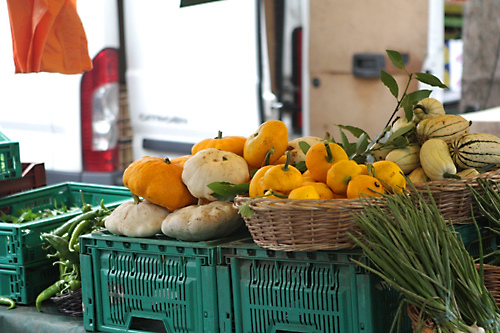 For some reason, this year, no one in my neighborhood got the memo – or the authorities are on break, too – and when I came back from New York, ravenous for a lovely loaf of good ol’ French bread, all the good bakeries* were shut tight. But even the bakers and other merchants who remain in town during August often have “wildcat” days in which they close at will, otherwise known as a fermeture exceptionnelle. And there’s an unwritten law about those which is that the farther away you have to go to get somewhere, the more likely it is that there will be a sign in the window for a fermeture exceptionnelle. If you look closely, in the picture of the boulangerie at the top of the page, there’s a small sign noting an impromptu fermeture exceptionnelle. 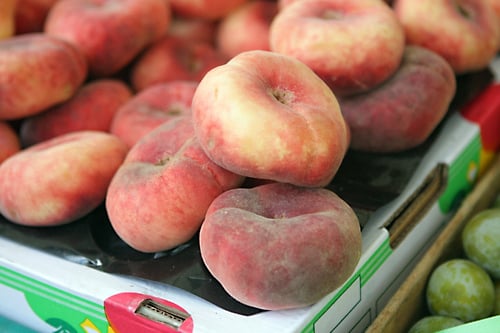 (*In spite of what people think, there’s a good number of not-stellar bread bakeries in Paris. I have my favorites and if you’re going to eat bread, you may as well eat the good stuff. It’s one thing that I’m a persnickety about. And cheese, too. I’m, working my way up to being more selective about wine, but for now, I’m still a fairly cheap date.) 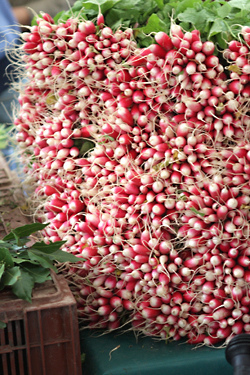 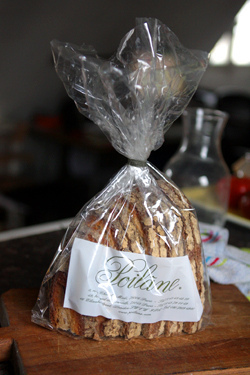 Thankfully Poilâne sells their bread in supermarkets and I finally gave up my scavenger hunt and took the easy way out. (And hey, one could do a lot worse than pain Poilâne, even if it’s from the supermarket.) But the other obstacle I’ve been facing is that for some reason, the jet lag upon my return has been formidable and I’ve been falling asleep around 4:30am and waking up around noon, just in time to miss the markets. 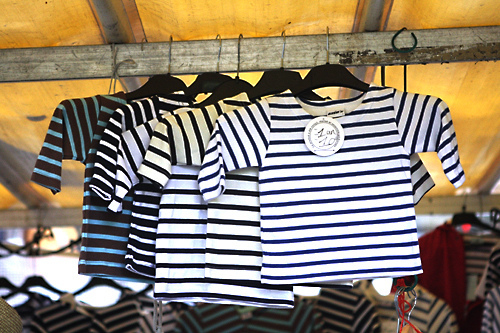 And although I’m fine buying Poilâne bread at the grocery store, I refuse to buy produce in them if I can help it, because of the disappointing quality. And I don’t like buying cheese in them either because if people continue to do so, the culture of the fromagerie will disappear. And who wants that to happen? Especially me, because I’d have to move. 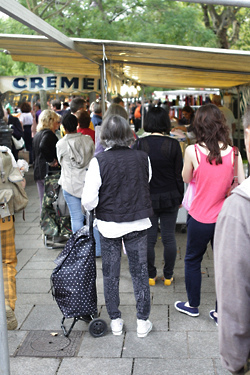 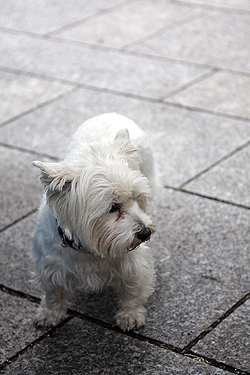 And also, well, it’s because I like shopping at the market. Luckily there are still lines at the nice folks that run the crèmerie at mine that sells cheese. And in August, if you don’t oversleep, you can catch the last of the summer fruits like peaches, white nectarines, and best of all, Reines-Claudes plums, which – if you get a good batch – are the best fruit you’ll ever taste. And I’m not exaggerating. 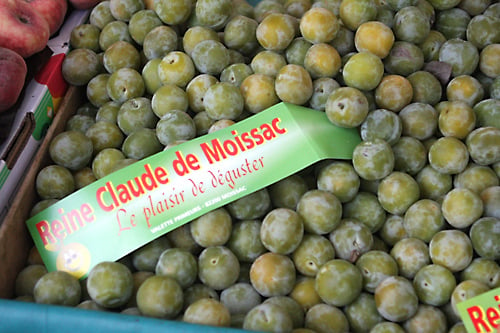 Of course, a lot of the stall owners are gone on break as well, and in their place, there are people selling t-shirts, Eiffel tower statues, African statues, and yes, even people hawking scarves in August. Although with the less-than-optimal weather, I’ll admit I’ve kept a few scarves handy on my coat rack. (And seasoned locals know better than to pack away their sweaters as well.) 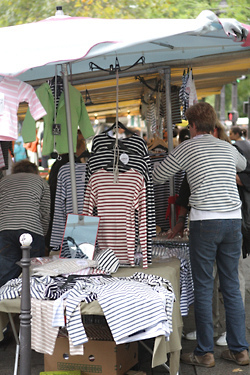 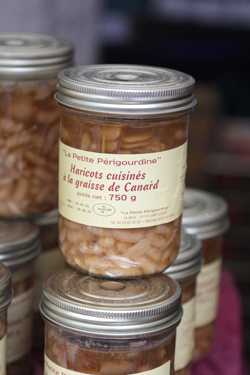 Speaking of apparel, something that’s become popular this year are les marinières, or French sailor shirts. No, people in Paris don’t generally wear berets, but they do have a curious love of anything nautical, even though the closest somewhat large body of water is the Seine. Although it’s not exactly a place you want to set sail. Or worse, capsize. I’ve been tempted to get one of those shirts myself, to be part of the jaunty crowd, but when I met up with two friends recently and both showed up wearing them, I decided to stick with the normal uniform of basic black.

Since I was able to get out of bed before noon today, I bought a lot of fruit, some tomatoes, and a bunch of basil from the only stand with bunches of it. Because I’m trying to dial down how much I’m eating for a while, after an over-indulgent trip to New York (and that’s putting it mildly…), I’m happily eating my way through anything and everything that’s I can get my hands on that’s a fresh fruit or vegetable. Last night I made a tomato-avocado salad with garlic toasts from my pain Poilâne and today, I chopped up some of that basil and a bit of fresh garlic and made a blitz-style Panzanella with the leftovers that had been soaking all night in the vinaigrette.

I’m probably going to eat most of the fresh fruit as is. (Well, if I can manage to emerge victorious from a first-time inundation by fruit flies.) I did buy a kilo of apricots because someone I know keeps buying jam at the supermarket when he runs out, which is folly because normally during the summer, I am a jam-making machine. So instead of being triste that summer has—at least weather-wise, been a bit of a bust, I’m making do with what I have. And I’m not complaining. 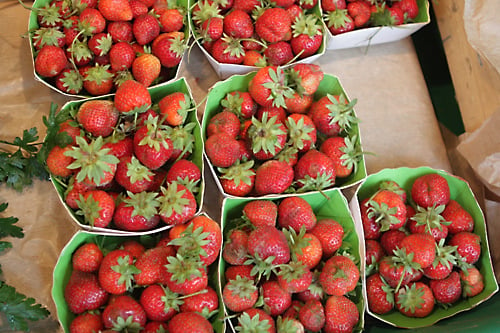