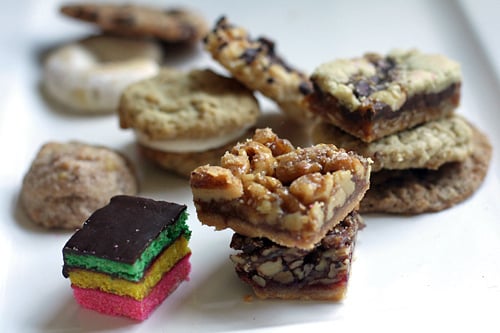 It’s funny because whenever I come to New York, people always tell me about far-flung places that I, now a slightly bewildered tourist in this city, have barely heard of. (Although I seem to be pretty good at finding every TJ Maxx and Bed, Bath, and Beyond.)

When people say, “You must go to Williamsburg!” – I look at them funny, wondering why they are suggesting I head to a colonial in Virginia for dinner where folks are dressed in traditional garb. Red Hook was a place where many people only went one-way, in the boot of a Town Car. And bad things happened to people on streets in Manhattan whose name contained a letter…at least according to my mother. 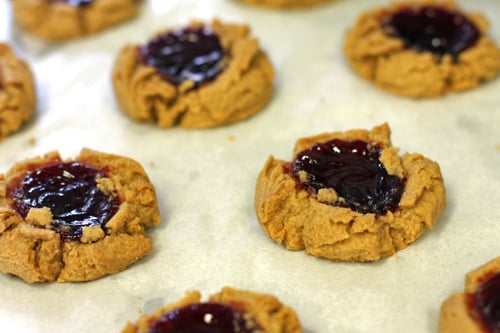 I’ve gotten with the lingo a bit so I don’t look like a hick when people tell me about all these places, but no one ever talks about Staten Island.

A year or so ago, I had a guest come on one of my tours, who told me he owned a cookie company. Until now, the only people I knew of that made cookies usually stuck with standards like chocolate chip cookies or brownies. 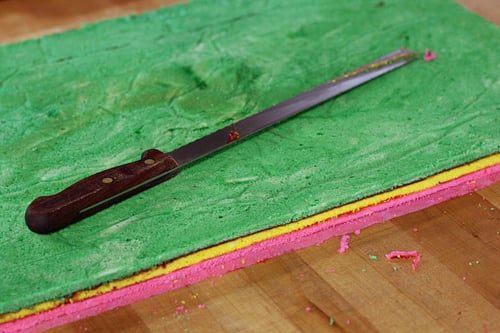 But he gave me a box filled with a huge variety of cookies and included a pamphlet, which was almost sushi guide menu-like which clear pictures and descriptions of each buttery bite, along with names. I didn’t count them, but there at least a hundred on that list, and that doesn’t mention everything else they make. Like chocolate-covered marshmallows and other goodies they add as they go. 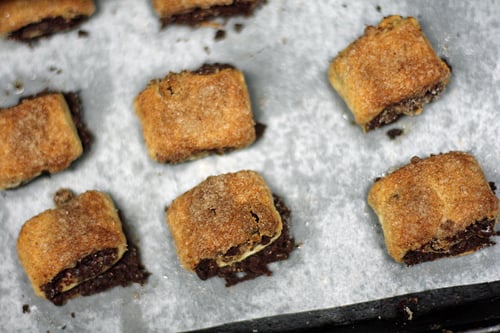 So along with a gaggle of European tourists, a few commuters, and one woman in a low-slung halter top trying to pick up one of the policemen onboard, I crossed the river via the Staten Island Ferry to make the trip to Staten Island to visit owner James Carrozza and his son, and to see his bakery, The Cookie Jar. I knew which car was his when I got off the boat by the license plate. 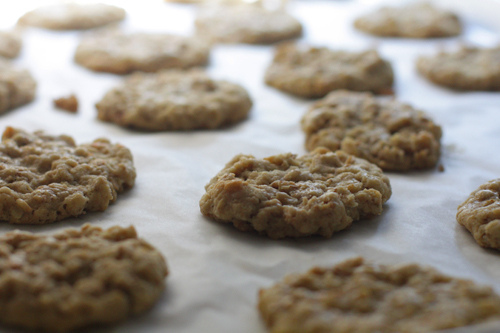 The pamphlet I had seen didn’t do justice to the display cases filled with cookies, which also included cupcakes of all sorts, bar cookies, ethnic specialties, and other treats. But before I could eat anything, I was eyeing a sign noting them make toasted marshmallow milkshakes, which James whipped up for me. (I didn’t see how he did it, but it involved a blowtorch.) 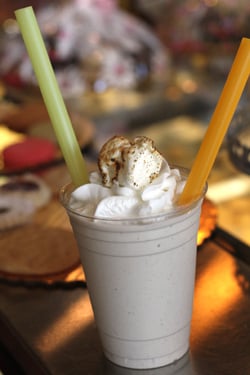 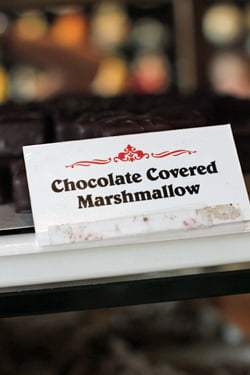 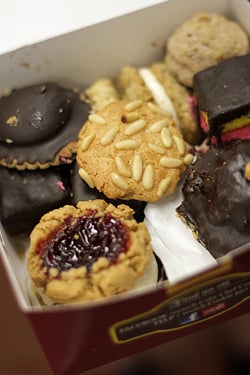 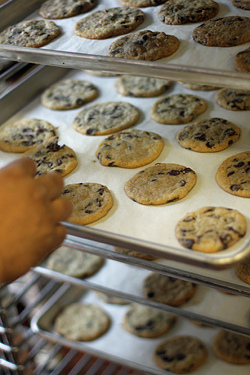 I don’t have the space on the site to go into the tremendous variety of cookies they make, but each one is made by hand and with top-quality ingredients. I noticed they used American Almond Products almond paste (from Brooklyn) and whole pecans and macadamia nuts, as well.

And lots of butter. 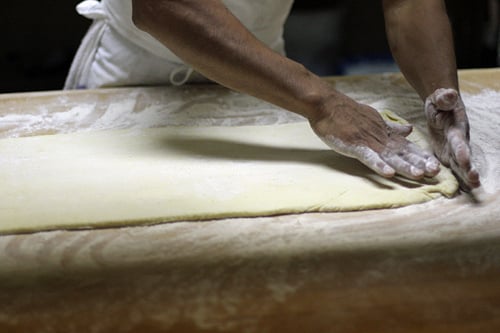 Every cookie and candy in the shop is sold for the same price – $10 per pound, because James said that it just makes it easier for everyone – you make more on some, less on others, he reasoned. I like that! But he did say that one cookie he had to charge a bit more for was the Pignoli cookie that was studded with European pine nuts, because they cost a small fortune. 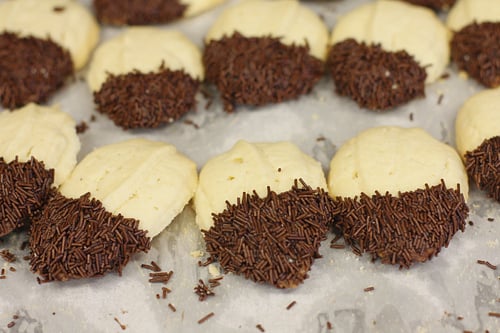 James is also a collector of cookie jars and the walls are lined with them, some for sale, and some from his personal collection. I ate as many cookies as I could, which was a feat considering we were going out for pizza (he suggested we try two well-known places on Staten Island, which I whittled down to one). Because the cookies are small and flavorful, a cup of coffee is nearly obligatory with them as well. Thankfully, there’s an espresso machine on the counter, and the remnants of the box I brought home I’ve been enjoying with my morning coffee every day. 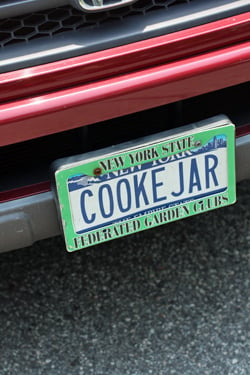 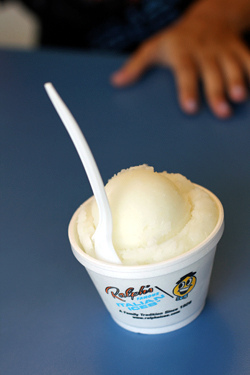 When I thought I could eat no more, we stopped at Ralph’s for a lemon ice, which I’m told is a popular specialty on Staten Island, especially to counteract the blazing summer heat. 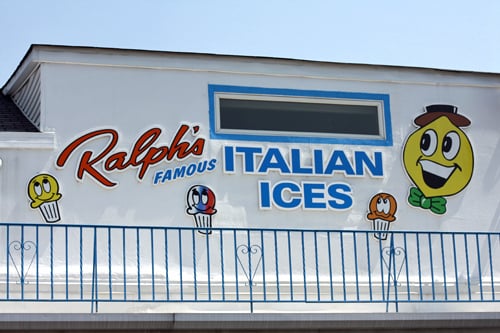 Since it was pretty hot out, I could see the appeal…although I barely made it halfway through because I was saving room as we were en route to Williamsburg for lunch. Luckily I found out we weren’t driving all the way to Virginia for hamburgers, which I gathered when we hopped out of the car and found everyone tattooed and dressed in plaid shirts instead of women wearing billowy sleeves and men playing fifes and drums down the street.

Although I’m wondering if in a few hundred years, someone is going to try to recreate a village full of people sporting vintage-looking eyewear, dressed in rolled up jeans. I kind of doubt it. But I do think that The Cookie Jar isn’t ever going to change, which in my mind, is a pretty good thing. 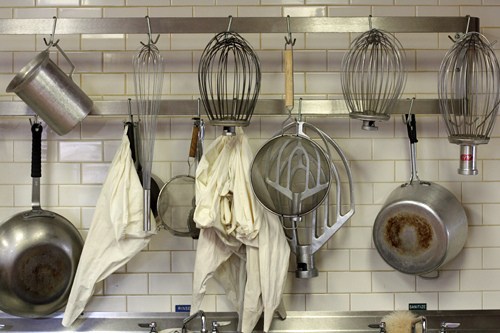