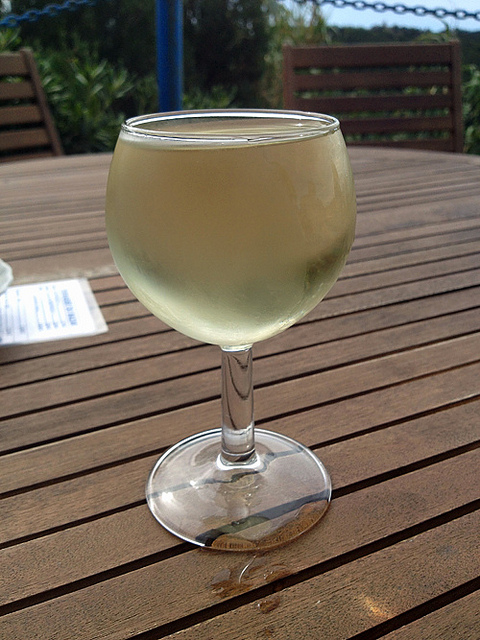 I usually have to spend a lot of time speaking in the conditional around here (using “it could be said that”, or “in most cases”…which is starting to make me sound like a politician) because there are always exceptions to every rule. But I’m going to go out on a limb here and say that one rule that is almost steadfast in France is that glasses are rarely filled more than half-full. (Noticed how slyly I popped in “almost” and “rarely”- which are obvious proof that it’s going to be a hard habit for me to break.) It was never explained to me why, or in the case of a glass being half-empty, why not. Yet I think it’s one of those “only in France” rules that gets implemented because a full glass is simply pas joli, or not attractive.

It’s a hard concept for us Americans to fathom, a place where full=better, and an oversized steak hanging over the edges of a plate is more appealing than a few slices of beef neatly plated up and arranged on the plate. And it amuses me that many people judge the quality of a restaurant by how full they are when they leave. Probably the biggest complaint, in fact, you hear coming from people when they didn’t like a place was because they left and weren’t full.

I don’t know how that’s possible because when I go back to the states, I can barely make it though my main course because the appetizers are about the same size as a French plat principal. And I am bound to be stripped of my San Francisco stripes because I can no longer make it through a Mission burrito. But when it comes to wine, I somehow find the willpower to get through whatever is put in front of me. 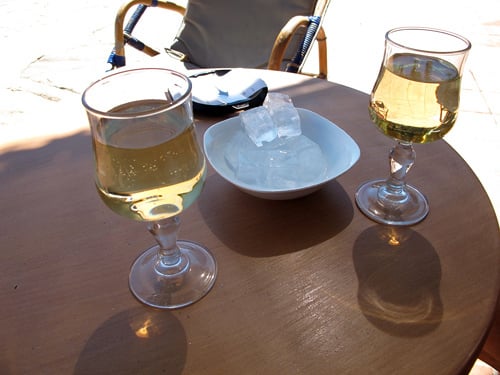 On a recent trip to Provence, I forgot how the “never full” glass doesn’t necessarily pertain to wine. And my ability to make it through a very full glass of wine was tested, especially at 10:30 in the morning (or – gulp – earlier), when it’s typical to stop in a café to prendre un verre. Nor does the admonition not to put ice in your wine hold true. In fact, one café brought out a bowl of ice with the wine, the helpful patronne telling us as she set it down, “It’s much more sympathique…non?”

For those irked by what is perceived as stinginess of Paris cafés who offer up drinks with a lone cube of ice languishing on the surface, barely cooling down the beverage past the room temperature mark, head to Provence, where ice is practically forced on you. However being able to put ice in your wine assumes that there’s room for a glaçon or two in the glass. 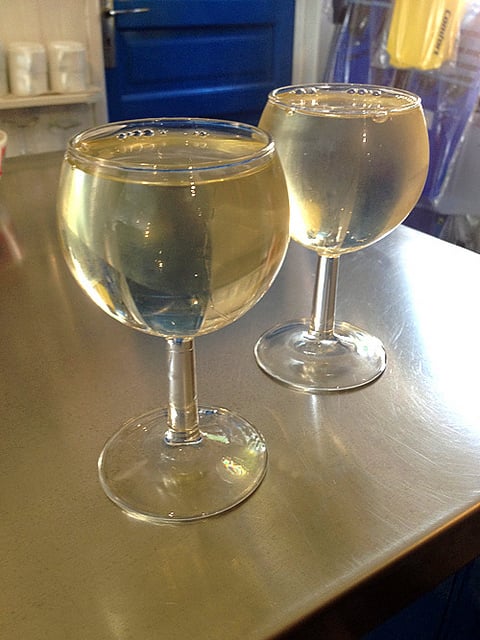 Curiously, at the café where we had the rosé (which we had at a more reasonable hour, in the afternoon), the server brought out a little ramekin of salty store-bought mini crackers. Since we were in Provence, we asked about having some olives (which would have been plus sympathique – non?) and the waitress was surprised, telling us that people from Paris usually preferred the crackers, which was news to me. (She may have taken a cue from me and slipped in that they normalement prefer crackers, but I didn’t catch that.) But she was kind enough to comply, along with an extra glass of ice, which filled the glasses up a little bit plus prettily. 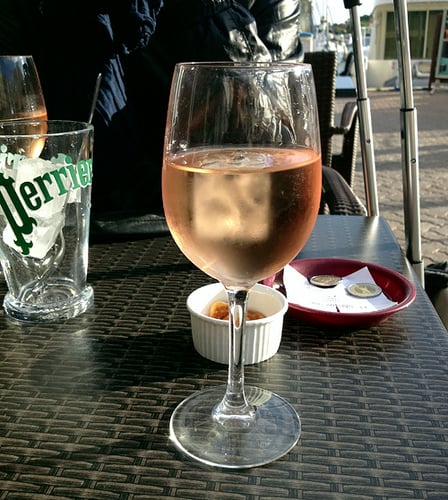 The full glass of patron-pleasing hospitality and generosity is expressed nowhere better than in Japan, where you are served filled-to-the-rim cups or boxes (masu) of sake. And although I’m not precisely sure what a half-filled glass in France means, if you come to France and your glass is half-full, note that it’s not a lack of graciousness on the part of the host or hostess, but simply a desire to keep Paris as plus joli as possible. However in Provence, all the rules are off. And you’re welcome to enjoy your wine however you like, noon and night. And in the morning as well.