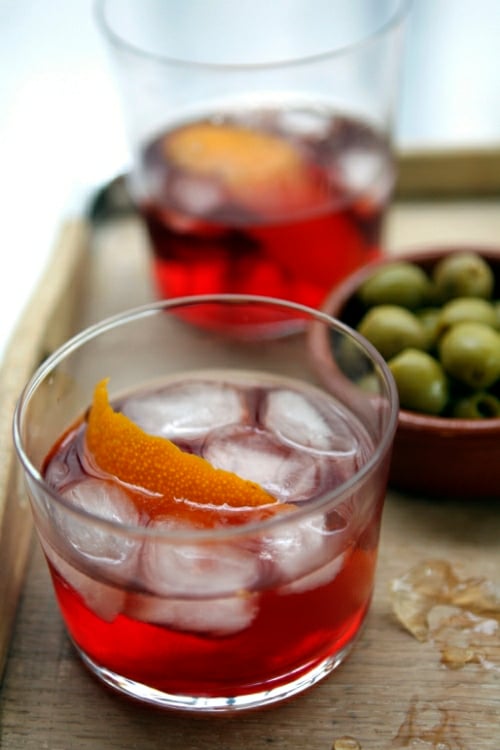 Whew! It feels good to be back. I go caught up on a whole bunch of stuff. But boy, do I need a drink. Good thing I have this barrel of Negronis on hand. I featured my rotund wooden beauty in a recent newsletter, although I was concerned about mentioning my Negronis on social media because I often get in trouble with auto-corrected text. But there’s nothing to “clean up” after a few Negronis except perhaps you, and your guests.

I am in love with my barrel and was delighted when a friend in Paris saw it in my newsletter and called right away to tell me she had an old barrel holding up a bookshelf in her house, and brought it by as a gift the other day. However when I filled the it with water, it became what is probably the first indoor water sprinkler, with water spraying everywhere from between the bulging staves. So I’m glad to have a “pro” model to fall back on. 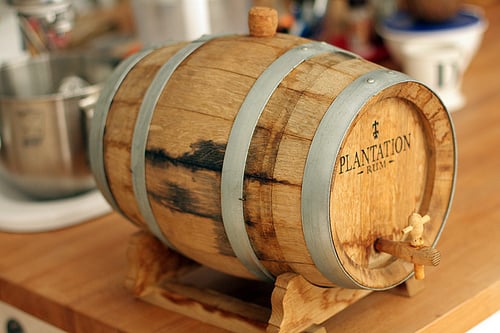 Still, on delivery day, I returned the favor by offering her a Negroni, which my friends, family, neighbors, and probably even the delivery people around here are going to start lining up for. That, my folks, is what happens when you have barrels are cocktails on tap. Negronis are high-test drinks, composed only of alcohol with just a few ice cubes to dilute the madness. I’ve been thinking about cocktails a lot lately. And not just because I just realized that I’m not really well-equipped at handling, well – anything, lately. Hence the need for the break. 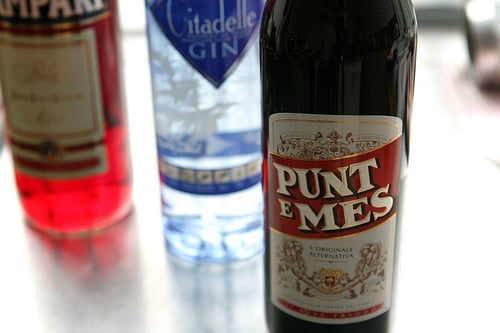 But also because mixing cocktails is like making pastries; there is a certain balance of flavors and ingredients. And once you hit that, all is good with the world. Negronis have their fans, and I’ve become one too, because the Negroni is perhaps the simplest cocktail to make and there’s no need to remember a list of ingredients or measurements; it’s just 1:1:1.

And it’s the perfect cocktail to roll out your barrel for. My beauty is from Plantation Rum, and is on loan from Candelaria, which I hauled home through the streets of Paris and apparently is not quite a usual sight around town. At least judging from the stares I got. And almost as soon as I got it safely inside my front door and into my kitchen, I poured my three bottles of liquor into the barrel a couple, then waited a few months to start letting the drinks trickle out, tasting hourly daily, to check the results. 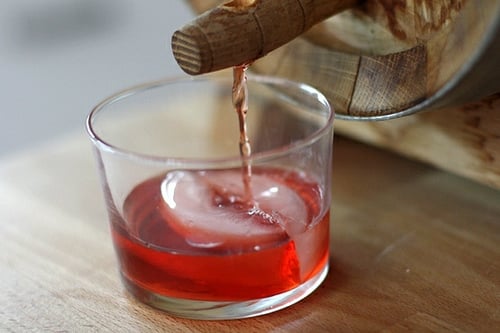 The verdict? Delicious, and potent. Proceed with caution.

I used Campari, Punt e Mes (sweet vermouth) and Citadel gin for the batch I aged. But when I was at a local liquor store, the woman showed me some variations on these, such as a bitters made by Dolin that is a bit more subtle than Campari. So feel free to use brands that you like. Negronis don’t need aging – if you wish, just mix one up in a glass, and enjoy.

To barrel-age Negronis: Pour 1 part gin, 1 part sweet vermouth and 1 part Campari in a cedar barrel and shake gently to combine. Let age for a couple of months.

One a side note, I looked far and wide in France for an aging barrel to purchase because I was lent this one. I checked out a lot of online resources, like Ebay.fr and LeBonCoin, as well as the BHV department store. Because nothing seems to be easy – hence the need for cocktails (and une pause) every now and then – I’ve had to do some work on the vocabulary for “barrels”, which was a bit of a challenge. Few, if any, cooperages in France seem to make small barrels. And it’s important to know who made the barrel as I was advised by a distiller in France not to get one made in China because they are often treated with – well, we probably don’t want to know.

Confusingly, at least for me – and for my French friends who I asked for guidance – there seems to be a confounding bit of vocabulary to know regarding wooden barrels, which made my search even harder:

Barrica or Barriquo – a barrique, in the Gascon dialect

(And even French people make goofs, including the waiter in a restaurant in Provence that I had to explain to the other night what tapenade was made of.) I am still kicking myself for not buying a barrel I found in a housewares store near Chablis that they had leftover from buying the stock of a previous store (#nitwit). But am determined to add more to my barrel collection. Or collection of tonneaux. Or tonnelets. Or fûts.