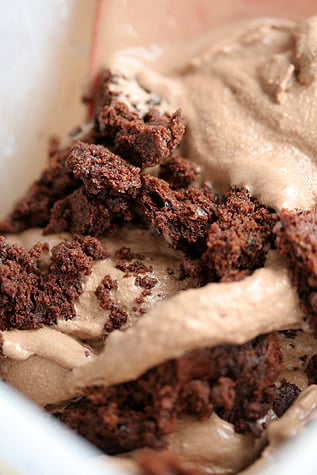 I was wrestling with coming up with an agave-sweetened chocolate cake that was delicate yet oh-so luscious, and tasted so insanely chocolaty, almost over-the-top, that no one would be missing a dang thing. Unfortunately I didn’t have much time—or success, and after re-washing my cake pan and mixer bowl one too many times, I gave up for good.

(And no requests for the recipe in the future, unless you have a few minutes to spare to come over and do some dishes.)

It was sad, because the last cake I whipped up was really moist and extra delicious and I probably was this close to nailing it. I swear, I was ripping of pieces right and left and stuffing them in my face. But it was also about 1/2-inch high. And since I recently shared a rather flat cake with you, I decided to dump it.

Ok, that’s not quite true.

Seeing as I can’t throw anything away, I broke it into shards and stowed them in the freezer, seemingly away from my greedy clutches. (…actually, those frozen bits were pretty good snacks…) 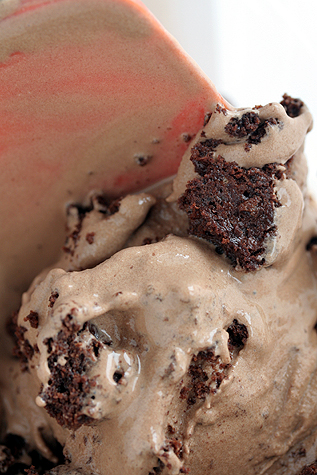 Well here I am, a few weeks later. I had a really good, but extra-large, batch of hot chocolate mix leftover that was begging to be used for something else, so I turned it into ice cream by making a custard with 1 cup cream, 3 yolks, and a generous 1/2 cup sugar then straining that into the chocolate mix, adding a dash of both vanilla and chocolate extracts.

See how resourceful I can be?

Once churned, out came the ice cream and I folded crumbly chunks of the cake into the soft custard. And now it’s resting in the freezer for dessert tomorrow night. (Ribs and peanut slaw, fyi…)

Now let’s see if it stays there that long.