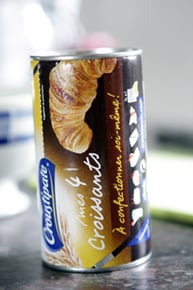 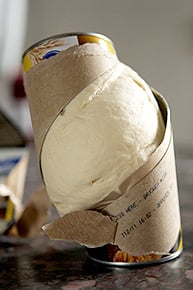 Poppin’ fraîche has gone global and even with over 1200 bakeries in Paris, why would anyone bother walk all the way across the street to get a fresh, buttery croissant in the morning, that only costs 90 centimes, when you can simply unroll a package of doughy crescents and never slip out of that comfy peignoir de bain? For all you lazy types out there, I took a bullet for you and tried them out.

And speaking of taking bullets, when I peeled back the first layer of the package, the dough exploded with a startlingly loud pop, which so shocked me that I jumped as the dough quickly expanded as it burst from its tight confines. I almost had a crise cardiaque. 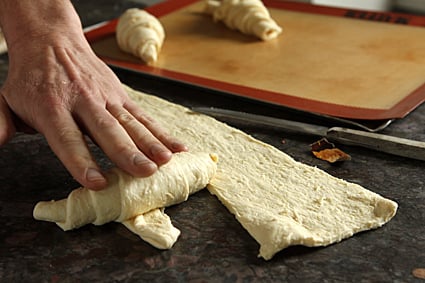 The ingredient list was nearly as wordy as the instructions but the upside is that I learned a few words to add to my French vocabulary, such as stabilisant and agent de traitement de la farine. (Margarine, I already knew). As they baked, my apartment took on the oddly alluring scent of the métro stations equipped with “bakeries” that “bake” croissants this way, whose buttery odors may – or may not – be a result of some sort of traitement. 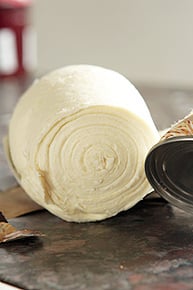 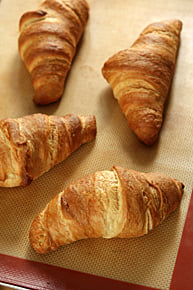 One thing I often have to remind people is just because something is in French, like croissant or macaron (or elementary school lunch menus), doesn’t mean it’s a good version of that item. Just like one could conceivably call a hot pocket of dough with some warm stuff in the middle a calzone, after ripping off an end of one of the soft, spongy crescents, in the words of the late, great Tony Soprano..with all due respects, I’ll stick with the croissants pur beurre from my local bakery. Even if I have to put on something other than my bathrobe in the morning to get them. 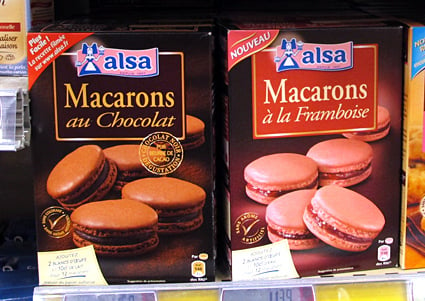 (Someone recently asked me on Twitter if people here were raising chickens in their backyards. They must have confused Paris with Brooklyn.)

Alsa makes all sorts of mixes, including a powder that somehow turns into ice cream or a sorbet with a “fabuleux goût de fruit!” I don’t know how that churns out, nor do I know anything about these macarons, which come in chocolat, café and framboise. But as they say in America, if it looks too good to be true… 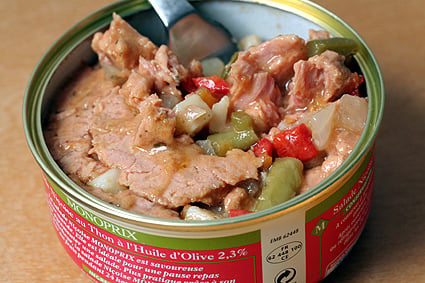 It’s just a matter of time before we see Caesar Salad in a can. But Monoprix has a jump on canned salads with their salade Niçoise. Am not sure how those who say that a salade Niçoise shouldn’t have anything cooked it in would feel, but once I peeled back the lid on this one…well, let’s just say this is a pretty definitive argument for the raw vegetable version. I know I’m convinced. 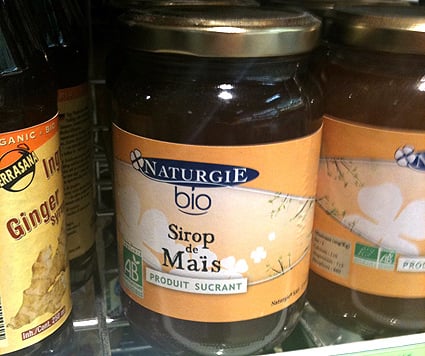 Nothing strike fear in the hearts of Americans more than the words “corn” and “syrup” in the same sentence. And you’ll notice, as a courtesy, I didn’t put them right next to each other for those of you out there who are sensitive to those things.

While we wait for the future when people start loading drinks back up with corn syrup (don’t laugh; I never would have thought in a million-trillion years that companies would use “real sugar” as a selling point), the French natural foods markets are getting a jump on things by selling sirop de maïs, proudly. No masking it behind goofy names like “sucre de maïs” (corn sugar) – it’s right up there, in your face. I am not sure what it’s used for, or why you can buy it only in natural foods stores, but not regular supermarkets. But France isn’t called the land of contradictions for nothing and in case you need to know where to find it, that’s where it is. For now, or for l’avenir (the future). 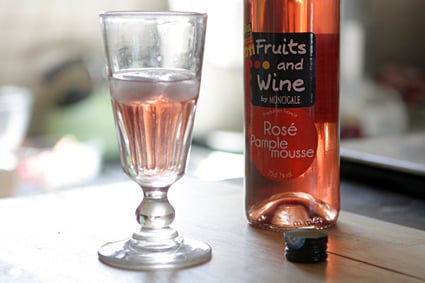 I like the fact that it says “Fruits and Wine” in English. Because otherwise, Anglophones might pick it up by accident, confusing it with rosé. But before the grammar police hop on a plane to correct mes comrades in France, in their defense, technically grapes are fruits. So they (or this) indeed should be plural. But as much as it is a little disquieting to see wine and fruit juice pre-mixed together, our neighbors in Spain make sangria and they get no complaints from me when I go there for a visit. I bought this more as a curiosity and after circling around it in my apartment for a few uncomfortable days, I figured I should at least pop the cork. I mean, unscrew the top off.

Because my extended French family is more Marseillaise than Parisian, I put ice in my rosé, like they do in Marseille. And if any other beverage in l’hexagone is calling out – actually screaming – to be served thoroughly chilled, this is it. When I drew the glass to my lips, I took a quick whiff and was relieved that it indeed had the aroma of dry, fruity rosé wine. However a moment after that first sip, I wrinkled up my nose…and booked a trip to Spain. 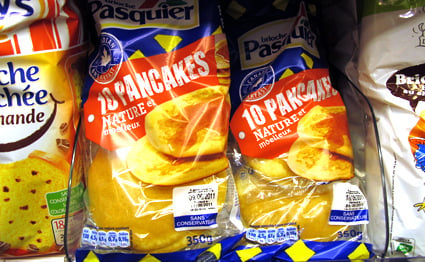 If the idea of cold pancakes doesn’t sound so appealing to you, you’re not alone. Actually, you we are alone. Sold by the sack – or if you’re at Starbucks, they sell them individually alongside the other pastries. I am not sure of what the appeal is of a cold pancake. Do you dip it in maple syrup? Do you slather it with equally cold butter? Do you dip it in your coffee?

Or maybe because the packaging is red, white and blue, they’re meant to be like those frozen waffles in America that you stick in the toaster to warm up and eat with your hands? Oh, to heck with it. I want a croissant—preferably a non-explosive fresh one. 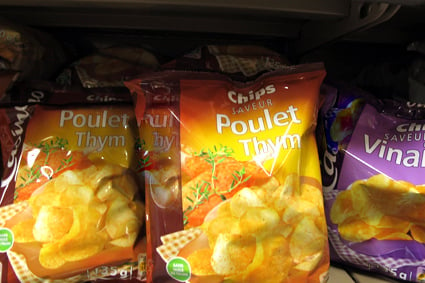 A few months back a friend formerly from New York had a party and bought all sorts of lovely hams, figs, and cheeses to serve with l’apéro (the aperitif). Romain’s eyes almost fell out of his head because the usual fare offered are often things like peanut butter-filled Curly Balls or other pre-made snacks with “cheese”-like fillings. 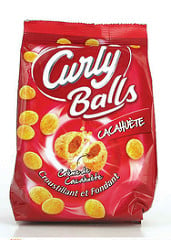 In fact, the snack-food aisle (and the people) are expanding so widely that the chips and other stuff are threatening to take over the place of the supermarket yogurt aisle in terms of length, quantity, and variety of available flavors. I’ll admit I buy sticks d’Alsace (pretzels) once in a while, and the salted nuts are pretty good, including the peanuts. But the peanut butter-flavored treats above are interesting because the French have a famous aversion to peanut butter, but snack on peanuts with drinks. Which is like saying, “I don’t like mashed potatoes, but I like potatoes” or “I like corn, but I don’t like corn syrup.” 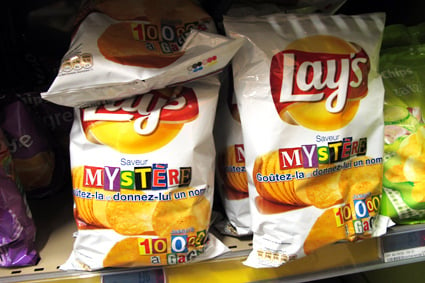 But what’s even a greater mystery are chips that are flavored with…well, it’s a…mystère… 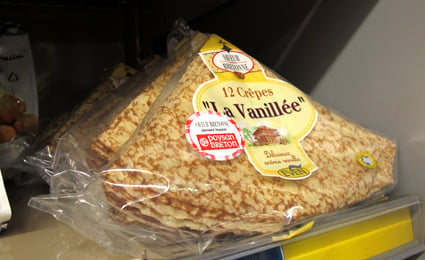 (This field has intentionally been left blank because I’m not sure how I feel about packaged crêpes with a suspiciously long shelf life.) 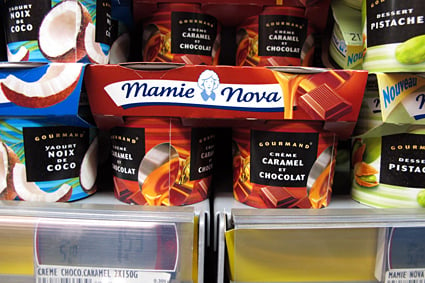 One of my favorite places in the French supermarket is the yogurt aisle. Although lately it’s become harder and hard just to find plain ol’ regular yogurt without all sorts of flavorings and sweeteners in it. So much so, that I’ve been going to the health food store to buy my yogurt. (And if I ever miss American yogurt, I can get some of that corn syrup to add to it.) In supermarkets, I’ve seen pots of the stuff with pistachio-macaron flavoring, and stuff for kids that are cotton candy-flavored. But it’s the packaging that can be more shocking and sometimes the colored labels are so bright that they hurt my eyes, more than Avatar did.

Technically, this isn’t yogurt but dessert, I suppose. Although it’s one of the products that’s clogging up the yogurt aisle, nudging out my beloved French yogurt. And I’ll have to admit, closer to home, I’ve even seen it in a certain someone’s refrigerator. When I bust him dipping a spoon into one, he just looks at me with those big, brown French eyes and says helplessly – “J’adore ça.” (“I love it.”) 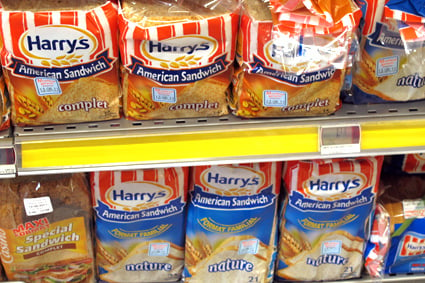 Did you know that Harry’s bread is consumed in two-thirds of all households in France? (Probably not.) Do you know why? Probably not. But if so, please explain it to me.

I’m not sure why anyone would prefer this “American Sandwich” bread over the freshly baked loaves sold in one of the bakeries that are on just about every friggin’ corner. Of every single street. In every single neighborhood. But I shouldn’t say anything because at least they bake it for you, and it keeps for weeks. Which, as they say, is très américain.