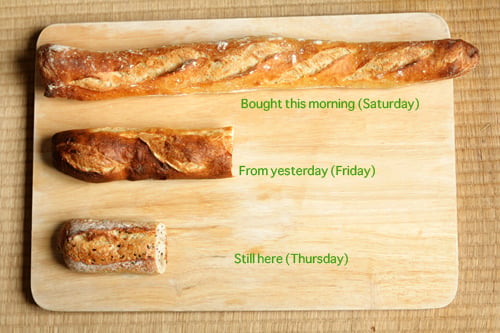 A while back, a food editor in the states asked me to send him daily some ideas for articles that I might want to write-up for them. I thought about it for quite a while, then sent a response for an article with recipes for using up leftover bread, which I tentatively titled: The French Bread Crisis. They kindly responded, thanking me for the idea, but passed on the story. I’m not sure why, but maybe it was because they couldn’t imagine anyone in France having leftover bread lying around.

To avoid this crise, a number of people remarked in the previous post on French supermarkets that they bought Harry’s “American Bread” because the puffy, pre-sliced white loaves lasted quite a bit longer than regular French bread. But I’m still perplexed because what’s the point of living in France if you don’t eat French bread?

Oddly, though, if you’re not careful, you’ll find yourself hardly ever eating fresh bread – even if you buy your bread fresh daily from your local boulangerie. You’re probably scratching your head at that one – just as those editors were likely scratching their heads when my proposal landed in their Inbox – but think about it: If you live alone, you buy a baguette and eat few some with lunch, then some with dinner. Seeing as it’s really not possible to eat a whole loaf in a single night by yourself (although I’ve come close), you’re going to have some leftover.

So you buy a fresh baguette in the afternoon for dinner, which you wrap up and eat the next day. Then getting back to my timeline, you have some bread leftover the next day, which you eat for breakfast. But here’s the rub: You’ve got the whole thing carefully planned out and have calculated how much bread you’re going to eat at each meal. Then something happens that throws the whole thing into turmoil.

Let’s say you go out to lunch with friends. Do you cancel just so you can stay home and maintain your baguette schedule? Or most bread bakeries are closed in Paris for two days. So you have to go elsewhere and if you head up to the 10th or something, you probably go to a place like Du Pain et des Idées and pick up a pain aux cereales, which lasts longer than three meals, which again, throws the whole thing off. Or let’s say you have a house guest for ten days and on day #1, he slices into the fresh baguette for breakfast, leaving the stub of yesterday’s baguette in that awkward stage between fresh and too stale to slice. No one wants to eat bread that’s not at it’s best when just around the corner, they’re pulling out fresh loaves from the oven while you’re giving your teeth a workout with a two day-old loaf. No matter how carefully planned your strategy is, something is bound to come up like a dinner party or a lunch with friends that’s going to screw the whole thing up.

I haven’t figured out an effective solution. Some folks freeze their bread, but my freezer is packed full toujours. Plus then you’re stuck eating previously frozen bread all the time, which negates having eight bakeries within a two block radius. You can also buy a half a baguette, but I like the heft of carrying a full-length baguette home because the half-size ones screw up my balance.

(The half-size ones, though, do fit better in a bicycle basket which is better because just one trip down a cobblestone street, and that full-size baguette is gonna be hopping around more than a fifty-something year old man who’s been neglecting to take his Saw Palmetto, and is trying to make it home quickly.)

But I think I finally may have hit upon a way out. Starting today, I’m now engaged in a little live-together experiment for the next ten days. Aside from a quick trip to the pharmacy this morning for a dix jours supply of le Prozac, I’m hoping that I will have finally found a solution during that time since there will be two of us to tackle the overload of bread. If not, my next address in Paris will be at the hôpital psychiatrique. (Or vice versa, is more like it.) Although I wonder if they serve baguettes over there. And if so, I wonder how they handle the leftovers? If you don’t hear from me in the next ten days, I’ll let you know.