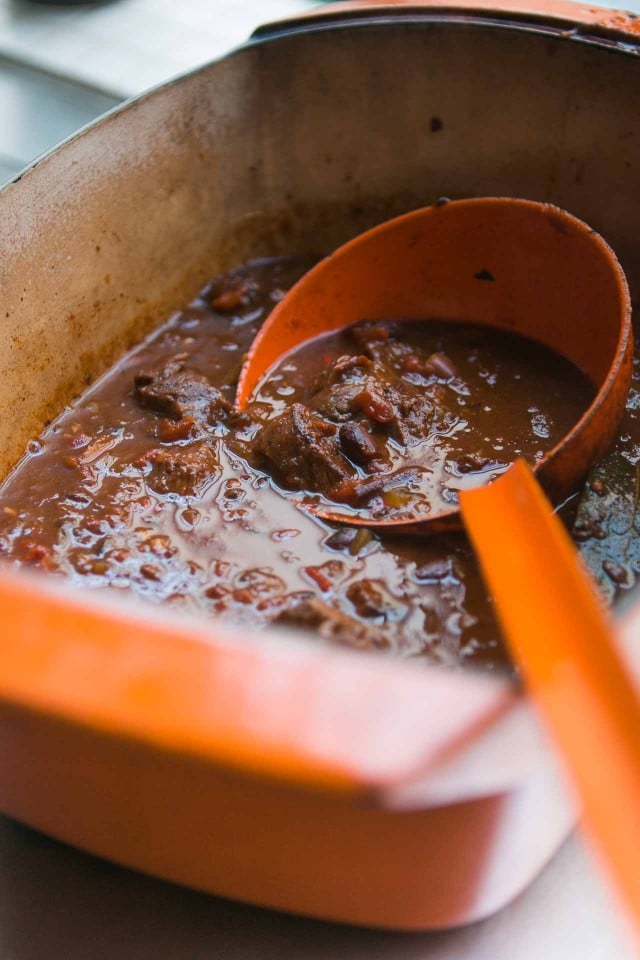 I used to wait tables in a vegetarian restaurant many years ago and one of the items on the menu was Cashew Chili. I would say about one-third of the customers would look at the menu, then look up at me, and ask – “Are there really cashews in the Cashew Chili?” 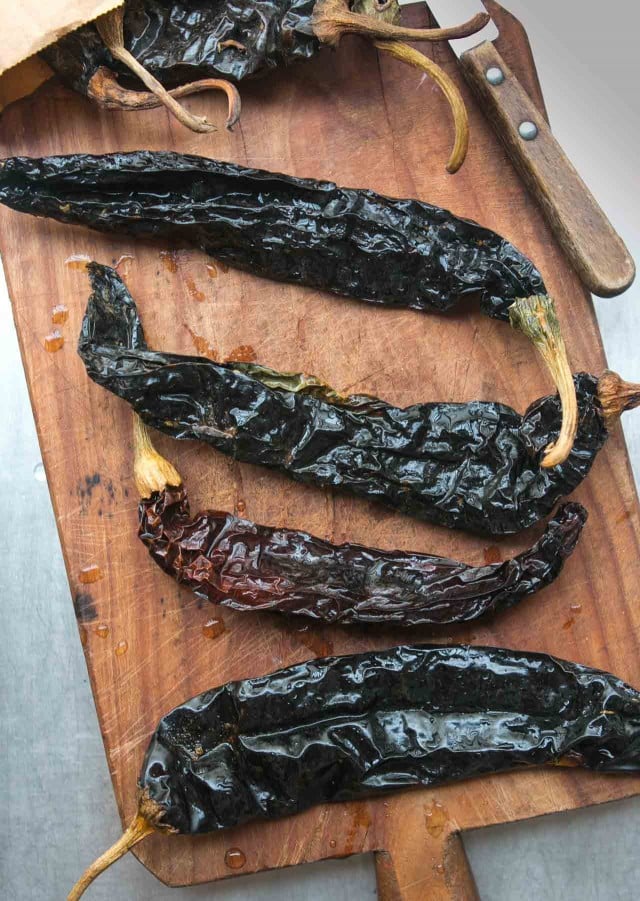 It was hard to respond to that. Although the answer “Yes” seemed pretty obvious (at least to me), it was hard to say “Yes, the Cashew Chili has cashews in it” without sounding like a wise-ass. Thinking about it now, I probably could have come back with a more interesting retort and I guess should think of another one for this chili recipe, because it is made with beans, and will likely raise some hackles. 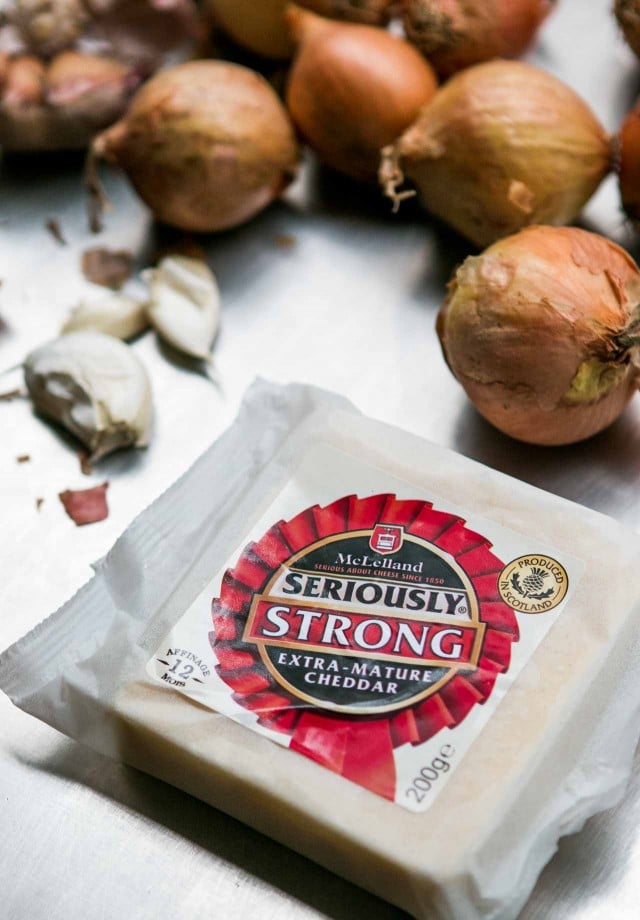 Therefore, I would like to officially recognize that real Texas Chili does not have beans in it. But when you have beautiful Rancho Gordo beans in your kitchen, and you don’t live anywhere near Texas, I took it upon myself to cash in one of my “free pass” cards you get when you live overseas, and made a bean-based chili. 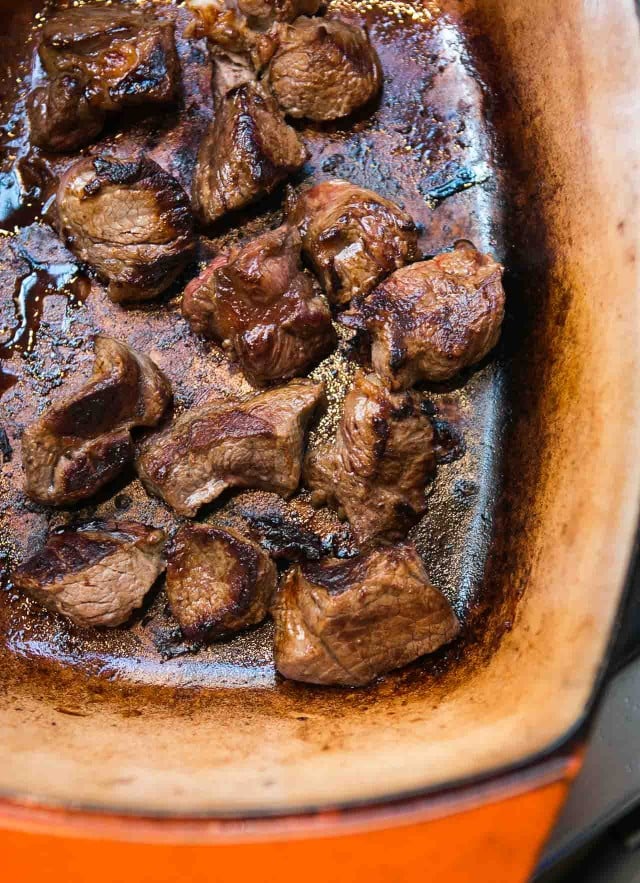 I’ve been wanting to make chili for ages and when I was sent a copy of The Rancho Gordo Heirloom Bean Grower’s Guide, it’s arrival prompted me to open one of my precious packages of Rancho Gordo beans and hit my local butcher shop.

One of the few things I usually bring back to France are these beans, and the bean packets fit neatly in and around all the unfilled spaces in my suitcase. They’re perfect because I don’t have to worry about squishing them. And their precise one-pound packaging lets me add as many as I need to, to get me right to my luggage weight limit, without going over. 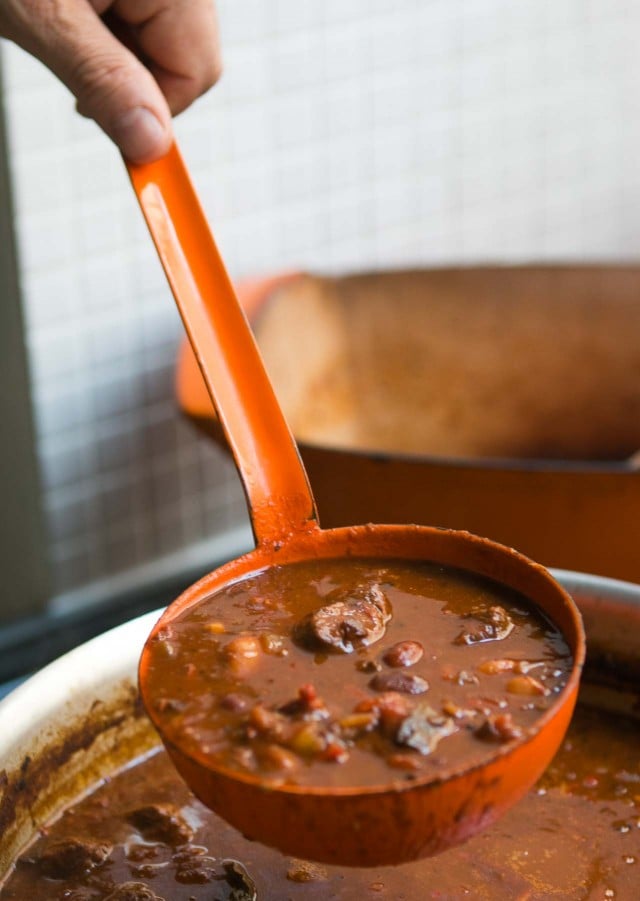 My French guests have never seen beans like these and are always amazed by their swirling, variegated designs. Names like Good Mother Stallard and Yellow Eye don’t exactly translate but I’ve never had one complaint in my years of cooking them. Where you are, you can use whatever chiles you like. Mine were a gift from a guest from Mexico and I’m not sure what kind they are but most are labeled. If it doubt, ask. You can use either fresh or dried chiles for this recipe.

Since I veered from tradition already with the beans, I also added some chocolate which gives the chili additional depth of flavor. It doesn’t take much like chocolate, but the chocolate adds a smooth underlying richness that goes well with the spicy bean and beef chili. 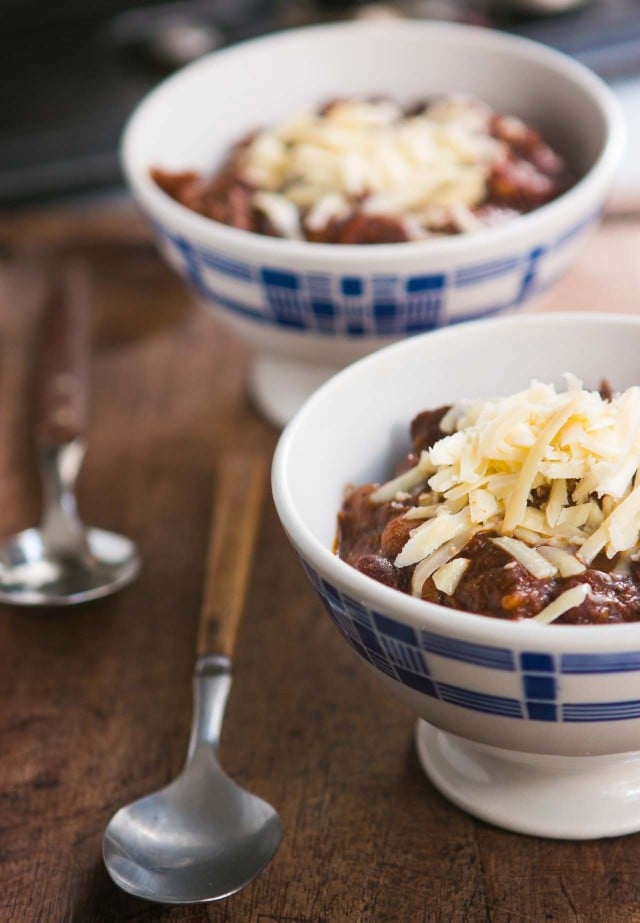 There’s lots of ways to soak and cook dried beans. Some use a pressure cooker and others use the soak and simmer method, as I do. If you wish to use canned beans, use 8 cups (1kg) red or pinto beans with their liquid in place of the cooked dried beans. I start my chili the day before by salting the meat and soaking the beans, although you can omit the first two steps and just go right in to the recipe. In France, butcher shops sell beef especially for long stewing, called Morceaux de bourguignon. (Or paleron or gîte.) For those who can’t get unsweetened chocolate, use an extra ounce (30g) bittersweet or semisweet chocolate and maybe skip the brown sugar. As mentioned, use whatever chiles (fresh or dried) are available to use.) I did find out from my friend the kind she gave me were pasilla and guajilo. And feel free to dial up the spices, if you’d like. I kept it more moderate, since I like the flavor of the beans to shine through. But you can certainly season to taste. Most dried chiles will soften once they are rehydrated, then simmered in the chili. If you think they won’t, you can puree them and add them to the pot.

Serving: There are plenty of ways to serve chile. Some like it over rice, others prefer it plain. You can offer bowls of grated cheddar cheese, sour cream, sliced green onions, and chopped cilantro so guests can customize their bowls. Cornbread is a great accompaniment, too. There are some recipes in the links, below. Storage: Chili can be refrigerated for up to three days, or frozen for at least two months. It will thicken considerably subsequent days so you may wish to thin it with water or beer when reheating it.

Notes on dried beans: It’s best to use the freshest dried beans you can find, which sounds a bit like an oxymoron. But the dried beans you buy might have been sitting in the store for several years before the arrive in your kitchen. So try to get them from a place that sells them relatively quickly. Steve Sando of Rancho Gordo recommends using beans that have been dried within one year, if possible. Any dried beans over two years old may not soften.

If you live somewhere where the water is mineral-rich (hard) like it is in Paris, the locals add a pinch of baking soda (sodium bicarbonate) to the cooking water, although when I told Steve that we did this in France, he shook his head vigorously “no.” So next time he comes to France, I’m inviting him over to cook some beans for me : )

In his book he discussed various methods of cooking dried beans, from using clay pots to pressure cookers, which he’s not a fan of because the bean liquids apparently don’t get reduced. I haven’t tried one so can’t comment, but one great tip he does offer is to use a large enough pan so that the beans and their liquid have plenty of room to circulate hot air above them. Choose a pot large enough so that half the pot is empty when cooking the beans.