If I had to name my favorite cuisine, it would be a toss-up between Vietnamese and Korean. Both offer charbroiled meats, pickled or marinated vegetables, and a lively and sometimes spicy array of seasonings. What’s not to like? 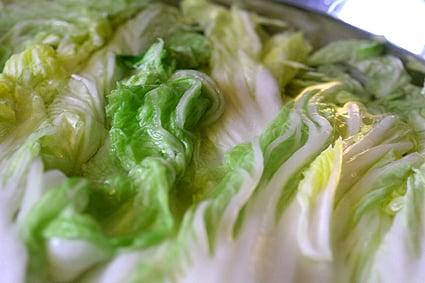 Most unfamiliar ethnic foods become instantly accessible if you take a trip to a local shop to stock up on a few specific ingredients. It wasn’t until I learned about Moroccan spices that I realized that a tagine is basically a braise seasoned with specific spices mixed in the right combination, such as turmeric, paprika, saffron and ground ginger. Mexican food isn’t all that difficult if one familiarizes themselves with chilies, cilantro, and corn tortillas. Ok, and a nice hunk of pork shoulder as well.

Every time I go to a specialty market, whether it’s Mexican, Japanese, or Chinese, I invariably lug back bottles of vinegars, odd herbs, specialty sugars and some sort of backside-burning chili pastes home with me. The other day when I was at Tang Frères, the gigantic Asian market in Paris, I heard a voice calling out for me to make Korean bbq this weekend.

It was a little strange: unlike the usual voices I hear in my head, this one had a Korean accent. And it was insistent.

Then yet another voice chimed in and reminded me that I’d bookmarked a recipe that Aun at Chubby Hubby made: the most amazing-looking Vietnamese Pork Ribs in Caramel Sauce from Molly Steven’s book All About Braising. And I knew from what the doctors and lawyers told me after the sentencing phase that the only way to calm those voices in my head was sometimes to give in to their demands.

(Unlike the other voices that tell me to do all sorts of bad things—like clean my freezer or pay my bills, which I ignore.)

Since a French-accented little voice in my head has been riffing on caramel lately, once my mind started gearing up to sink my teeth into meltingly-soft caramelized pork, I raced over to the refrigerated case at Tang Frères, confident that kimchi would go into my shopping cart as well. If my brain, at this point, probably sounds to you like the United Nations General Assembly of food…imagine what it’s like for me.

But I couldn’t find any. No kimchi? Zip. 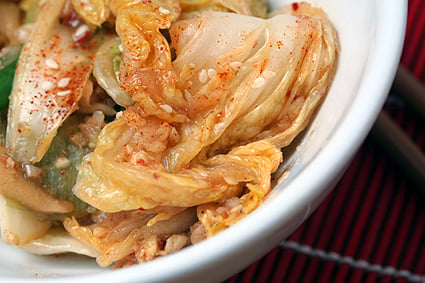 I’ve read that any Korean would be embarrassed to ‘buy’ kimchi, since it’s a staple of home-cooking. But since I’m not Korean, I don’t have that stigma. (Although all my Chinese friends insist I’m really Chinese, and we have our own stigmas.) And one stigma I’m over is the one against buying pickles.

Of course, they had everything but. So I grabbed the biggest head of Napa cabbage and, of course, being American, I bought way, way too many racks of ribs. Hey, if you’re gonna make ribs, you may as well make a lot of ’em. (What’s up with these recipes that call for 4 riblets per person? I’m thinking one rack per person.) No sooner had I left the market when I realized I had to lug all those ribs home on the métro, and learned another virtue of eating less: by the time I got home, I was certain my shoulder was going to fall off like the meat on the pork ribs.

I can imagine that people searching online for a kimchi recipe might stop here and wonder why they’ve landed on a site about Paris, chocolate, and baking. So I made sure the recipe had a little bit of sweetness so it makes the cut. And serving caramelized ribs alongside certainly doesn’t hurt my credibility either.

Now If I could only find some Parisians this weekend that have a hankering for Korean bbq and spicy pickles, I’d be in business. I’ve got 4 huge racks of pork ribs marinating in caramel sauce infused with plenty of sweet shallots, all set to go. I’ve got a couple of quarts of homemade kimchi and a few lengthy daikon radishes lined up for various banchan.

Oh, and a batch of just-churned milk chocolate ice cream as a cooling afterthought for dessert. There was another voice that told me to do that. But you already know about that one. 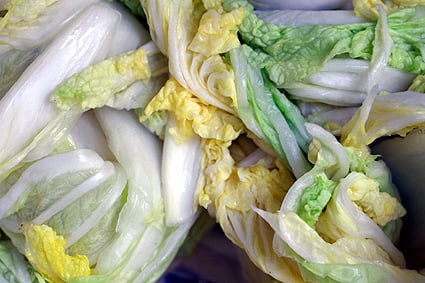 Recipe adapted from Epicurious and the San Francisco Chronicle (links below). I couldn’t find chili powder so I used some Thai chili paste, which made the kimchi a bit murky. If you can, try to find the Korean chile powder. I added a scant teaspoon of Mexican chile powder for color. Even though my arm was killing me from carrying home all that pork, I was a trooper and hand-chopped all the garlic and ginger. But I think it could also be done in a blender or food processor.

Storage: Many advise to eat the kimchi within 3 weeks. After that, it can get too fermented.

Kimchi (My other recipe)