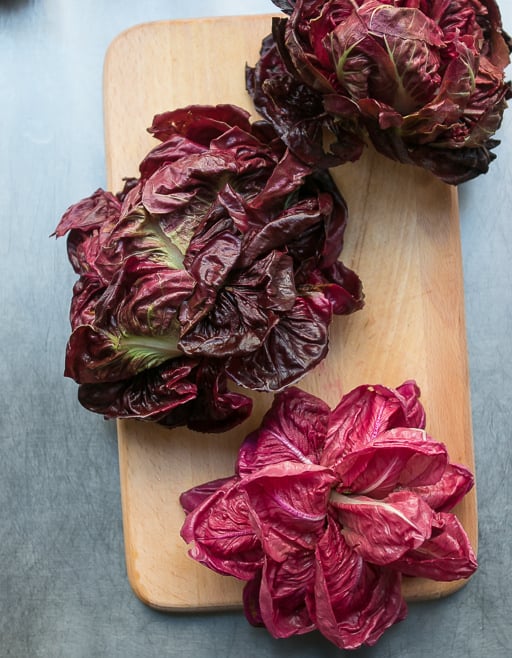 I don’t make risotto nearly as much as I should. I never order it in a restaurant unless I’m absolutely sure they’re going to do it right because there’s nothing worse than a not-very-good risotto. But there’s nothing better than a good one. Especially a good one with bacon in it. 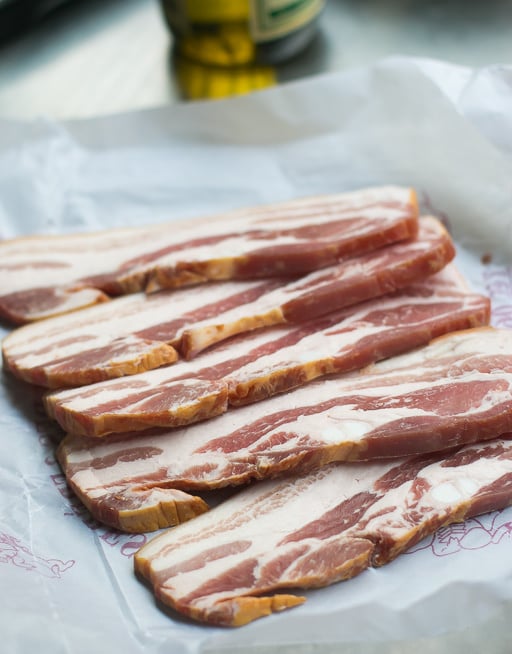 One night, back when I was working at Chez Panisse, Paul Bertolli, one of the world’s great cooks (Italian, and otherwise), was standing over the stove, tending to steamy pots of risotto for diners. So I go over to him and ask him for a lesson. And he was happy to teach me. As he presided over several pots of barely simmering rice, I got a few pointers from him. 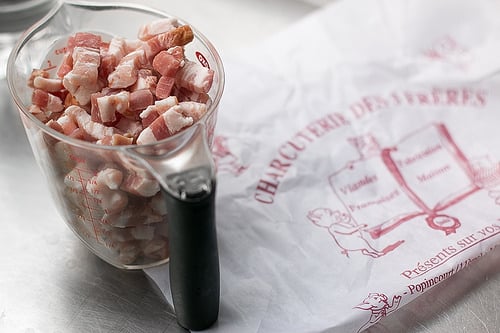 The first tip he said was to use turkey stock if you can, which he said was more flavorful than chicken stock. The second tip was, as you go, to add more stock only when there was just a thin layer, ¼ inch (1cm), of starchy, cloudy liquid floating on the surface of the rice. Risotto is an emulsion, and like any emulsion, you try not to break them during cooking. So add the stock as studiously as possible. 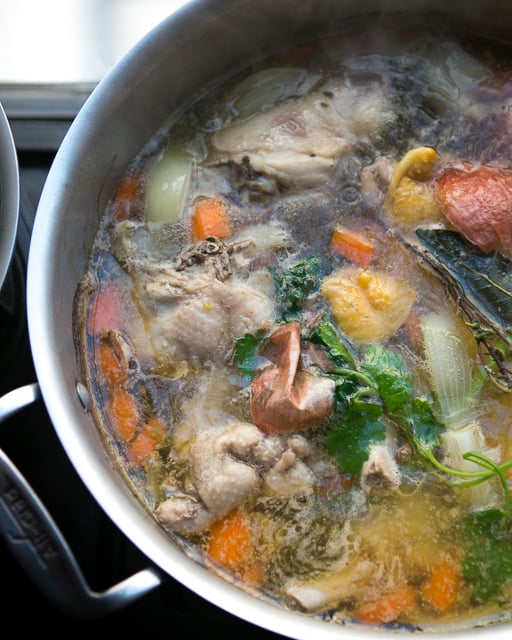 Lastly, when you stir the rice, make sure to knock any rice grains off the stirring utensil, back into the pot. 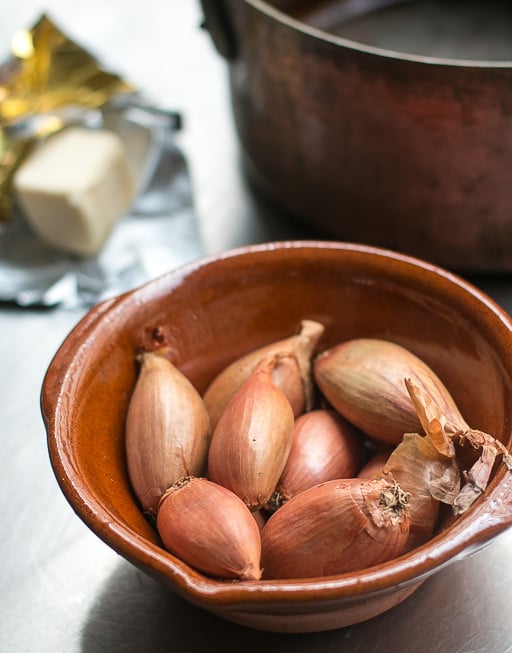 Same with any rice grains sticking to the side of the pot after stirring. Knock ’em off! 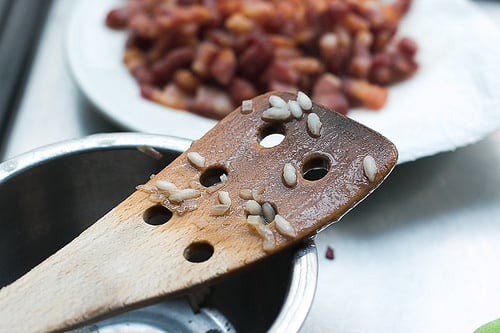 Those errant grains won’t cook at the same rate as the rice in the pot so you’ll have some uneven grains of rice in your risotto when it’s finished. 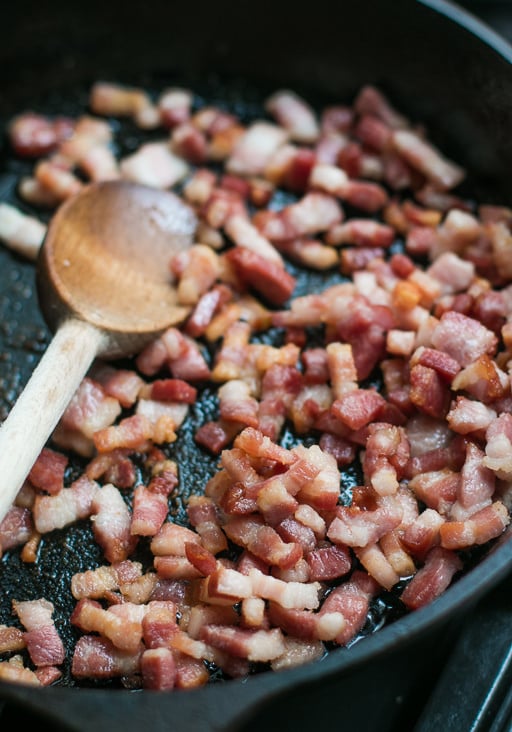 We never talked about what kind of rice to use, but most Italians have told me that carnaroli rice is better for risotto than arborio, so that’s what I use. It’s said to be starchier, resulting in a richer dish. I don’t argue with Italians so you can use either. 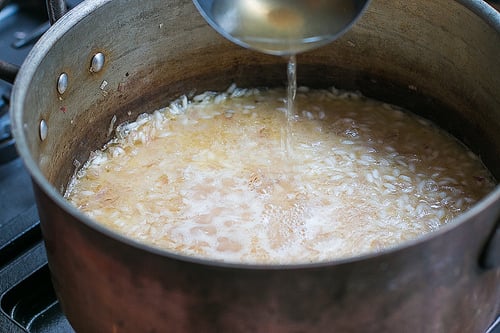 And perhaps I might get in trouble for going rogue, but I sometimes use pecorino or asiago in risotto, which may or may not be authentic, but sometimes it’s hard to cook with the authenticity police peering over your shoulder. And let’s face it, if you’re going to eat it, then you can do what you want. 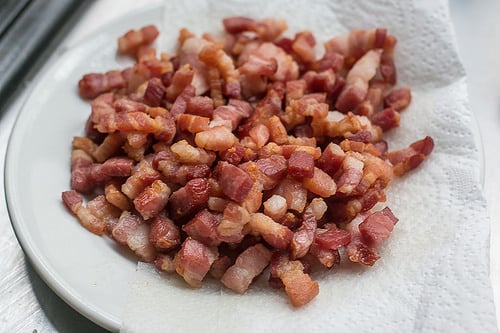 Here I used some gorgeous red chicory that one of the producteurs (producers) has been selling at the market. I first thought it was radicchio, but it’s less bitter. I don’t mind bitterness. In fact, bitter greens go well in risotto, a nice contrast with the starchiness of the rice and the richly reduced stock. So I make it with either.

To me, a bowl of risotto is a complete meal, although you know you’re in France when guests look around the table, and ask for the bread to go with the rice. And darn if my guests didn’t use the bread (which I’ve learned to have, just in case…) to sop up the rice. But traditionally risotto is served in a mound in the center of the bowl, meant to be eaten from the outside – where it’s cooler – keeping the thicker center warm, until you get there. The best accompaniment is a bottle of nice white wine, some Italian cheese to grate over the top, and, depending on where you’re from, perhaps some bread. 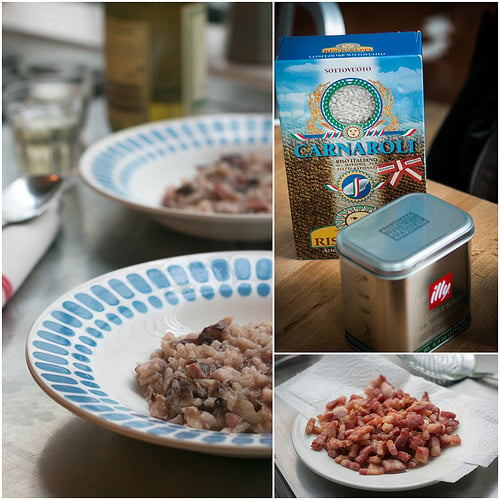 Because the bacon, the stock, and the cheese all have salt in them, use a light hand with it when seasoning the rice and shallots. You can swap out another green in place of the radicchio. I recommend something strongly flavored, such as kale, mustard greens, or arugula. I had some leftover duck meat from another project, so feel free to add some if you want to make the risotto feel more like a main course. For a vegetarian version, leave out the bacon and add about 1 1/2 cups (200g) sautéed mushrooms, bite-sized pieces of steamed or oven-roasted asparagus, or peas, and use vegetable stock. If you don’t drink alcohol, omit the white wine and add a squeeze of lemon juice at the beginning, with the first addition of stock, to add a touch of acidity.
Servings 4 servings