When I was in Méribel avoiding the steep slopes waiting in line at the cheese coopérative, I wasn’t alone: the joint was seeing more action than all those gasp-inducing ski runs. 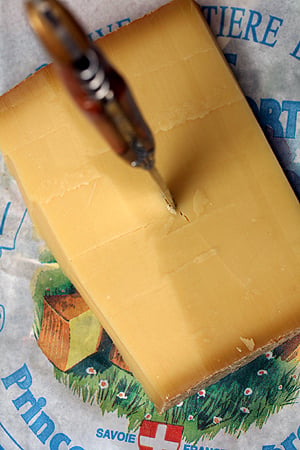 And just about every person ordered a nice hunk of Beaufort. And since they were in front of me in line, being France, of course each person had to have a 5 minute conference with the saleswoman about how to cut it, where they wanted it cut, exactly how much to lop off, if the other hunk on the shelf was better than the one they were getting, did they have another one in the back?…etc…etc…

The person in front of me scared me a bit when he requested a chunk that were as huge as a baseball mitt. It barely fit on the scale!

Naturally when it was my turn, it took me all of 1.3 seconds to tell her what I wanted and I ended up with a nice-sized piece as well—albeit of a more modest size—and could barely wait until I got home and dug into my chunk.

Like my dearly-beloved Comté, Beaufort is one of the mountain cheeses from the Jura and the Savoie. The nutty, milky, and dense cheeses from those regions are the ones that are impossible to resist when faced with the decision with what to buy at my fromagerie.

Like its relatives, including Swiss Gruyère, Beaufort will be aged for a number of months after it’s formed. Although all Beaufort gets aged a minimum of 5 months before it hits the shelves; the longer it’s aged, the nuttier, gently-sharper, and more deeply-flavored it becomes. And if I’m going to plow through a slab of cheese this big (ok…not a problem…a week later and it’s almost gone…), it had better be the best it can be. So I look for one that’s aged at least 18 months. Or longer, if possible.

Beaufort d’été is made from raw milk taken from cows twice a day, which graze on wild grass only during the summer months. That tends to make the milk sweeter than the rest of the year so the cheese made from that milk is considered even more special than plain ‘ol Beaufort. All cows must be from the same herd to conform to AOC standard, too. (And you think I’m kidding with all the rules around here for how I’m supposed to behave?) 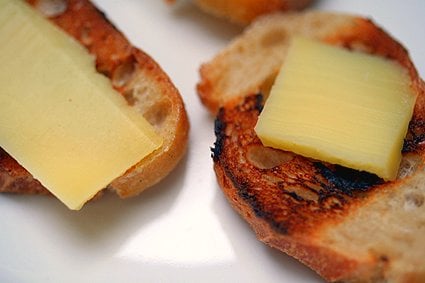 In my opinion, Beaufort is best eaten on its own; I like it with lightly-toasted slices of a baguette, especially one that’s speckled with a métro-load of seeds inside and out. But just a good, plain baguette ordinaire ain’t nothing to sneeze at either.

For the hedonistic, it would probably make an excellent grilled cheese sandwich, but it’ll kill me to hear about it melted atop a frozen pizza. No matter how many glasses of wine you have alongside. (I did have a great grilled Beaufort panini slope-side, as part of my sumptuous birthday lunch.) But all by its lonesome, if there’s a nice glass of cool white wine nearby—such as Sauvignon or something as smooth as a Riesling or a Pinot Gris from the Savoie—I’m not going to give you any grief about it. In fact, I heartily endorse it.

(And seriously..it wasn’t so bad with the rather-dry grapefruit soda I had with my lunch either.)

Because it’s aged longer than 60 days, Beaufort is available elsewhere, including in the United States, perhaps at your local cheese shop. It can be mail-ordered here and here. Or you can meet me on (or off) the slopes next year in Méribel. I’ll be easy to find; just follow your nose…and the smell of Beaufort.

For those interested, the Beaufort cheese cooperative has opened a shop and tasting room in Paris.