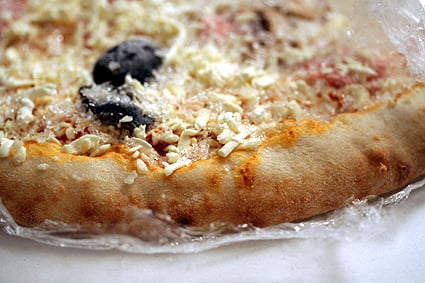 Every other week I’m forced to leave my modest little apartment because my housecleaner comes. I split since it’s pretty small and there simply isn’t room for the two of us to co-exist. So I leave and let her do her thing, whatever it is.

Oddly, it seems to take her an inordinately long time to clean it. A neighbor once told me she said my apartment was “…very messy.” But I don’t think that’s the reason, since I’m not really messy at all. I’ve seen messy, and my apartment ain’t it. Perhaps she’s been pilfering my chocolate stash and when I leave, she slips into my bed, flips on the tv for an hour or so, and armed with a nice box of assorted chocolates on her lap, takes une petite pause.

During that time, although I usually begin with lofty plans to spend those few hours at a museum or do something cultural, invariably I end up at the movies. This afternoon I went to see Gone Baby Gone, which was particularly devastating and quite a difficult film. Paris is a great place to watch a movie: usually people take them seriously and no one talks. After the film, there were plenty of sniffles as the whole audience seemed to have been as moved by the film as I was. When I left, I walked by my apartment, noticed the lights still on, and decided to stop in the little café I like to frequent.

As many have reported, including me, France has gone non-smoking, which is such a relief to those of us who hate eating dinner while the neighboring table lights up cigarette-après-cigarette, ruining our dinner by clogging the air with noxious fumes. Non-smoking as well, the cafés are a bit different, since they serve another purpose in the social fabric of France that restaurants don’t. They’re places for people to gather and chat. Which sometimes they do after work, but anytime of the day will do. In the morning, folks line up at the bar for their start-up jolt of expresso while others sit and read by themselves in the afternoon, with a pot of tea. Others simply have a glass of wine and stare off silently into space for hours on end, which is a talent I just recently acquired myself.

As I looked around, tables were filled with people drinking with friends or reading, but the air was clean and the tables were void of any ashtrays. I breathed in the air, which felt good and clean and pure.

But then I realized I missed it.

The place was a bit too clean and tidy. It’s like something happened and sanitized France, removing a part of it that maybe was vital to it. As someone who was anxiously waiting for the ban to take effect, it felt odd to be missing that lingering smell of smoke. Maybe it’s the funky side of Paris that’s now a bit lacking, which the reason why many of us like Paris. I’m not sure why, but something was amiss and it may take a while to get used to it.

Hungry, I left. But as I walked by my building, the lights were still on. I was getting famished and although I had some leftover polenta with greens and sausage in my refrigerator, I craved something not-so-healthy. So I went into Picard, the chain of frozen-food stores that are cold, impersonal spaces, with all the charm one would expect from a frozen-foods store.

Yet behind all that shiny glass and plastic, there’s seems to be the promise of something better; figs, fava beans, turnips, ice cream, foie gras, and fish sticks. (I’ve been eyeing those fish sticks for years!) People rhapsodize over their food, but sadly, what I’ve tried hasn’t been very good. Sure, the dreamy, soft-focus food-porn pictures on the packing offers the promise of deliciousness. But the reality is you slide it out of your oven, take that first bite, and you may as well close your eyes and transport yourself back to the dinner you recently had in Seat 21F.

I’m not sure why I came home with a pizza fromage champignon jambon, which set me back a whopping 2.10€. But I did. I was a little embarrassed to go in there and buy it, but figured, “Like is anyone else shopping in there going to judge me?” It wasn’t like when I lived in San Francisco and would run into chef friends at the supermarket and there’d be that quick scan of each others shopping carts, searching for incriminating evidence like canned ravioli or Lean Cuisine.

So I had a quiet dinner tonight in my nice, clean apartment, which I finally had all to myself. Here I am, living in Paris, eating frozen pizza right off the cutting board. Something was missing, so I pulled out a bottle of decent red wine, and drank a few glasses with my pizza, which helped a little. 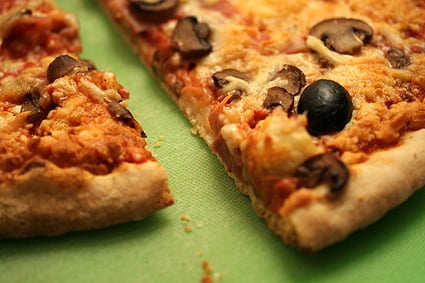 Actually, it helped quite a bit.