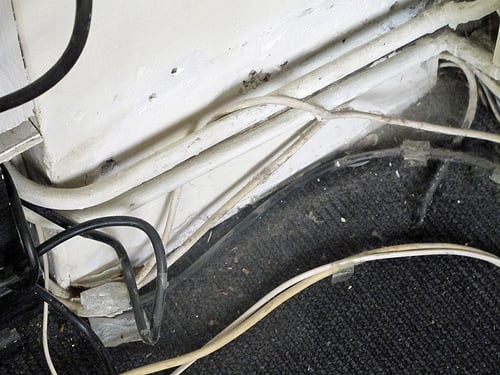 Well, I did it. After nearly ten years of living in Paris, I am finally going to have a place that I can call my own. After dipping my feet in, and checking apartments from time-to-time, I decided that it was time I went ahead and did it. So I bought my own apartment.

Hunting for an apartment in Paris is quite an adventure; there’s no multiple listing services like there are in other countries (and it’s estimated that over half the apartments in Paris get sold directly by the owners), so you need to spend an inordinate amount of time searching online, in the newspapers, and in real estate agency windows. And since each agency will only show you what is offered by their particular agency – and some real estate agents have a less-than-stellar reputation here – it’s a process that takes a combination of luck, timing—and of course, plenty of time.

Getting a bank loan is another hurdle to cross and I had noticed two major bureaucratic mistakes in the paperwork, then I was required to submit to a full series of medical tests to complete the loan, which I wrote about, but deleted, because I didn’t think anyone would believe me, because I couldn’t either. I guess I should be happy, though, because one friend of mine who was applying for a bank loan had to take a stress test on a treadmill, which fortunately I didn’t have to do…because my stress level was going through the toit.

In short, I almost had three nervous breakdowns. Well – nine, if you count the entire week of 4am conference calls when I was in San Francisco on something I’ve heard about, called a “vacation” trying to save the purchase when the first bank I was borrowing from changed their mind at the 11th hour and rescinded their offer, putting me in a tenuous position since I’d already committed to the purchase. And the mind-numbing amount of paperwork I blew through felled a record number of trees, and more brain cells than I could afford to spare.

So a process that might normally take 30 to 60 days, dragged on for weeks. Then months. Then half a year, then…. Until finally, the deal was done and I got the keys to my apartment. It was once an old print shop, previously cobbled together into a living space. Beautiful old stone walls were covered in wallpaper, which is called “cache-misère”, literally meaning “hiding the misery”, which is a reference to things people to do hide something considered “messy” or “outdated.” So one of my projects is to remove all of that and refurbish the stone. Another is to clean up the tangle of wiring that while creative, probably is a good idea to replace.

But most importantly, I won’t have to churn ice cream in my bedroom – and I won’t have to explain to my housecleaner why there is caramel in my bed – because one day I’m going to have a kitchen counter larger than a tapis d’acceuil (welcome mat) – although it’s gonna be a long way before I’m going to be able to roll one of those out around here. 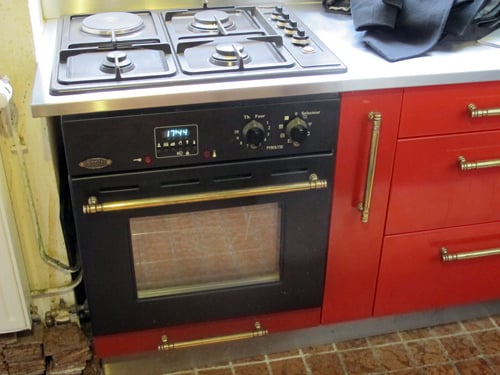 So in the meantime, I’ve been working on getting the place in shape. I’ve been doing things like explaining that Americans like windows that can open, I’ve learned that three is a maximum of number of people that are allowed to yell at me in different languages at the same time (and they are learning that I have a shorter fuse than initially first appeared), and that there are panoply of words that seemingly mean the same thing, like—say, for a sink:

4. Cuve (still haven’t figured out that one)

And plumbing catalogs don’t list by ‘type’ of item, like ‘sinks’, ‘bathtubs’, and ‘faucets’, etc but by “Collections”, with ominous names like Opus, Détente, and “Stillness” — so you have to flip through a series of square toilets (and who the heck can manage any kind of détente on a square toilet seat?) to find a normal one.

And I now know that something which is 199 by 282 by 79,5 is cent quartre-vingt-dix-neuf par deux cent quartre-vingt-deux par soixaint-dix-neuf virgule cinq, is even less-comprehensible when you’re holding up a crumbling wall, standing under a shower of plaster dust while avoiding electrocution. Plus I’m trying to teach delivery people that if they ring the doorbell, rather than just affix a delivery sticker on your door requesting that you call to reschedule the delivery, they have a better chance of completing a delivery on the first round. Oh, and I just got called for jury duty in California for next week. Needless to say, the explosion that will be heard around the world may be my head.

The good news is that you won’t have to hear my anymore bemoaning that I have a tiny kitchen. The bad news is that it’s going take me a while to get there. But after all I’ve been through, demolition and construction is a walk in le parque.

No, the bathroom isn’t functional. And the kitchen is nothing but a counter with a French oven, which embodies the paradox of French taste: the handmade stove is enameled in a gorgeous red enamel color, and right smack in the front is a bright-blue digital clock with large, flashing electrical numbers. (I wonder if that can be removed?) But that’s the least of my problems at this point. So the last few weeks have been spent stripping everything out to clean up the space, to see it better, and the next few weeks (or months) will be spent figuring out in which direction I’m going to take it next. But first, I need to figure out how to find a sink.

UPDATE: For the whole story on rebuilding my Paris apartment, check out L’appart: Delights and Disasters of Making My Paris Home.