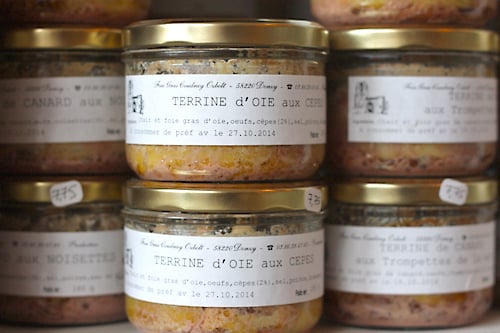 It wouldn’t be the first time, but I almost had an accident on my bike when I was heading to yet another tile store (who knew is was going to be so hard to find plain, white tiles?), and raced past a new place on my list. I had the usual 4 second debate in my head whether I should stop and grab a bite and a glass of wine, before I made the decision to grind myself to a halt and hitch my bike to a signpost.

Fortunately no one else was injured, but let’s just say that I think I need to lower my bike seat a little in case I have to brake unexpectedly in the future. (Well, at least if I ever want to have children, that is.) However I did manage to save the baguette and the croissant in my bike basket, so I think it was a decent trade-off. 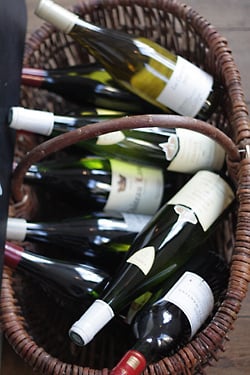 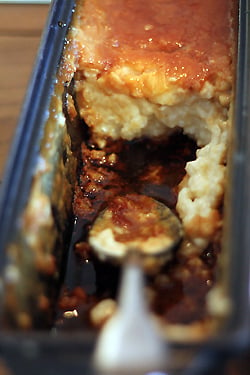 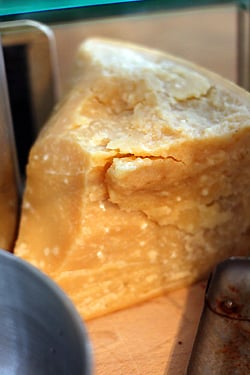 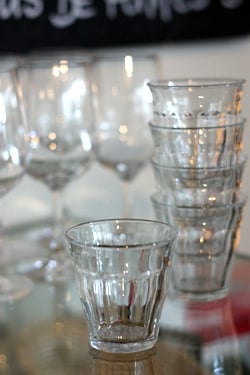 It was actually my third visit to Le Siffleur de Ballons this month. My first was when I was planning to meet my friend Theresa for drinks and a snack and due to an e-mail misunderstanding (you would think someone would have come up with a snappy name for that by now, a mash-up, like ‘spendy’ or ‘bromance’…I tried to come up with something but have other things on my mind at the present) but while I waited for her, I had a few glasses of Cheverny while I balanced myself on one of the metal stools, which I eyed for my new apartment, and talked to the counter woman.

“She’ll be here. Parisians are always late”, she said as she waved away my concern that I would be going solo that night, until I explained that my friend wasn’t Parisian. And although all the food coming out from behind the counter that everyone else was enjoying looked terrific – wooden boards heaped with charcuterie, including slices of chorizo, rosette sausage – which gets its name because the tightly wadded ends resemble the backside of a pig, or the, um, rosette – and a meaty terrine accompanied with baskets of baguette slices, as well as les croques chauds, and happily nibbling on sandwiches grilled in a press, served toasty and warm. But after my two glasses of wine, on an empty stomach, I decided to saddle up and head back home. 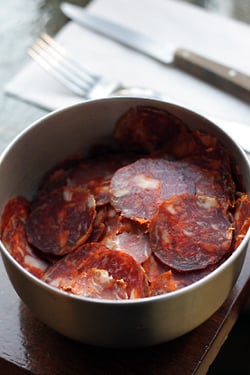 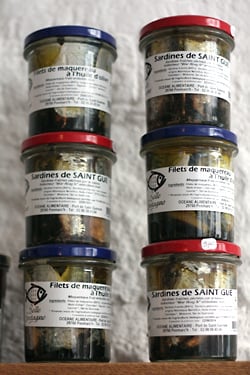 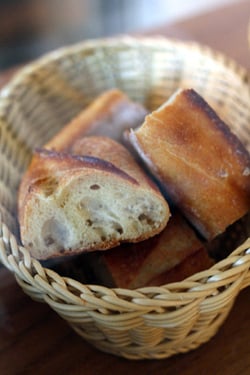 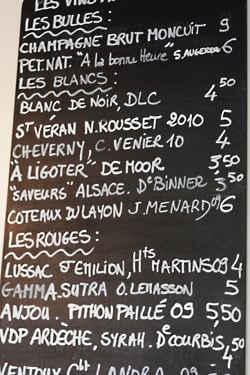 Cue forward to me and my friend having a good laugh and each blaming ourselves (which isn’t very Parisian either..) for the misunderstanding and making a definitive date, and including a date for confirming the new date as well.

So when the date at long-last arrived, we were both happy – and a little surprised – to see that each of us had actually made it, and we immediately scanned the wines on the chalkboard to decide what to drink. Most of them being vins naturels, I was really looking forward to trying a few. We went vegetarian and were happy to dip our crusts of bread in the sauce surrounding the potatoes roasted with bleu d’Auvergne cheese, and our sandwich, although I didn’t get to sample the sausages. But we certainly didn’t leave hungry, and it gave me an excuse to go back. 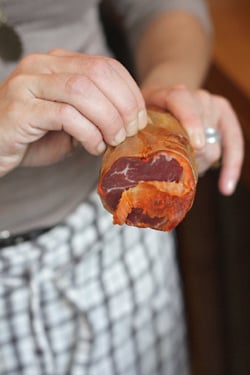 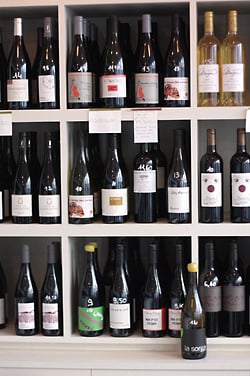 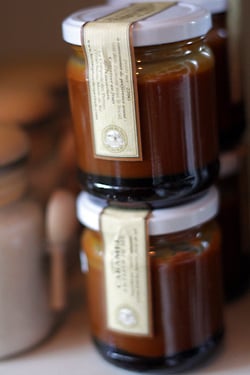 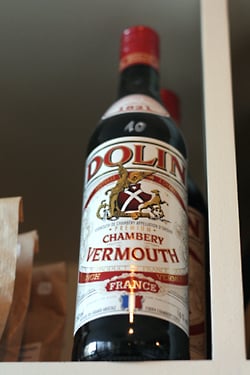 There were lots of great things in the épicerie adjacent to the wine bar; salted butter caramel sauce, mackerel filets packed in olive oil and sardines de Saint Gur (I have no idea where that is — heck, I can’t even find plain white tiles. But those sardines looked really good, wherever they were caught…), a few good French chocolates, and beautiful jars of Terrine d’oie aux cèpes (goose and mushroom). Bottles of wine, of course, took up a good amount of the shelf space and like some of the wine bars in Paris, you can pick something from the shelf and they’ll serve it to you.

I was pretty surprised to find Dolin French vermouth, which I’d read about because of the cocktail craze in America, but have never seen in France. And even though it was invented not far from the border, I’ve never seen anyone drinking vermouth in France. Well, except in the martini I had for my birthday last month, although I had to explain to the waiter what a martini was, even though the place was a hip cocktail bar. Fortunately I sidestepped the server and the bartender fixed me up. 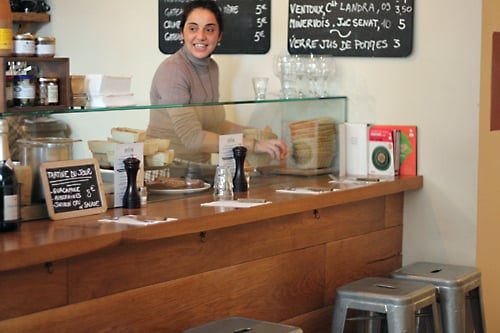 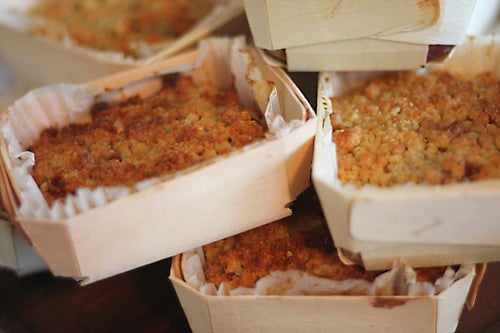 They told me at Le Siffleur de Ballons that they finally just got in a case, so I guess it really is as hard to find as plain white tiles. And speaking of which, it was time to get back on my bike and continue my search. But for now, this is one place that is firmly on my radar, and next time I whiz by on my bike, I hope it’s during mealtime so I can pull up to the bar again for a glass of wine – and something to eat, either with a friend, or without. 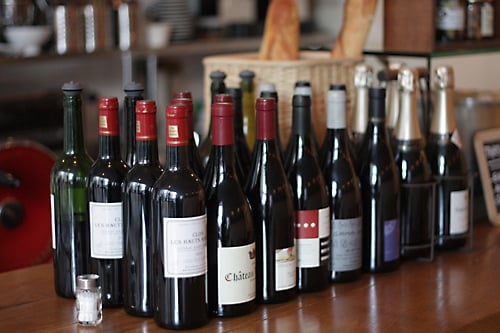