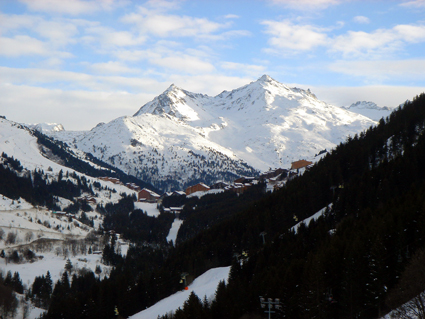 For the holidays this year, I decided to take up a friend’s offer to visit their family in Méribel, a village way high up in the French alps. As you can see, it’s a spectacular place. And I’m not just talking ‘gorgeous sunsets’ or ‘charmingly quaint’ spectacular. I mean, Méribel was mind-blowingly, insanely hallucinante.

Seriously, I wasn’t prepared for the awesome beauty of it all. Although I haven’t strapped on a pair of skis in over thirty years, there I stood, at the top of the mountain on my first day on skis in decades, ready to slide down.

Let me tell you—skiing isn’t one of those things that you get more comfortable with as you get older. *sigh* Especially when you’re with a group of skiers that include some crazy teenagers who, at the top of a particularly steep run, simply point their skis in the straight-down position, and shove off with their poles and a banchee-like “On y va, Daveeeeeeeeeeeeeeeeed!” 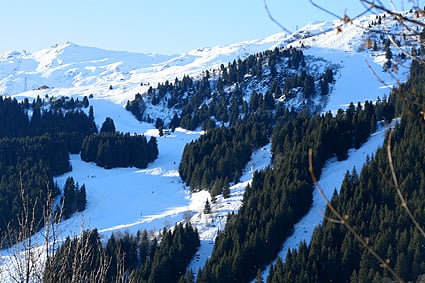 And off they’d go…

They were certainly fun to watch and I do remember how much fun I had at their age. But since I was celebrating being yet another year older, and I’d left my dentures inadvertently soaking by my bedside, the idea of spending my birthday toothless, in a helicopter being sped away by medics with a few broken bones (and a broken ego), well…let’s just say that wasn’t exactly my idea of fun. Yet I did have fun nevertheless; just at my own pace…thank you very much.

We stayed in a little cozy chalet, which is called a mazeau, although no one seems to know why it’s called that or how it’s actually spelled. So if anyone French knows, we’re all ears. The birds nearby had a nice little spot to spend the winter as well. I know that’s a birdhouse, although there’s probably a very specific word for it in French too. 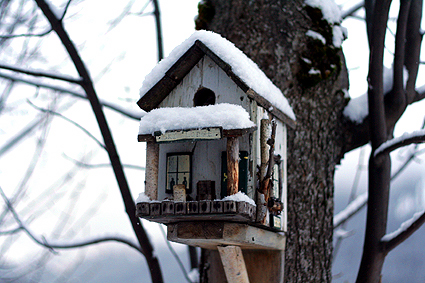 I know many of you were upset not to be around for my aforementioned birthday. But just to let you know, I’ve opened up the window for gift-giving until next year, so you still have plenty of time. If you weren’t around, I got my wish for the best birthday cake imaginable—a nicely-caramelized apple tarte Tatin.

Yes indeed, it wouldn’t be vacation…or France…if there wasn’t a lot of good food around. And my other birthday wish was granted and I got to pick whatever I wanted to have for dinner too. So I choose Raclette, a regional dish (although I think it’s originally Swiss…but I wasn’t going to quibble with anything cheesy) where a triangle of cheese of the same name is set by the fire to roast. Once warm, it’s scraped over boiled potatoes…which we cheated and roasted, since they taste better…and salty little pickled cornichons.

Luckily in the rather Euro-ish chic town of Méribel, there’s a homey little local cooperative which sells specialties of the region. Aside from jams made with rosehips and génepi-flavored eau-de-vie, there were huge..and I mean HUGE…wheels of mountain cheeses like Beaufort, Tomme de Savoie, and Reblochon.

My friend Jean-Baptiste said, “If this was America, there would be a riot.” 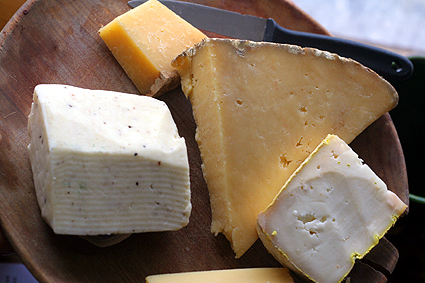 Of course the cheeses were worth waiting for and I even brought a few hunks home (of cheese…) as well as some other choice morsels from the Savoie including real polenta, not instant, which is almost impossible to find around these parts. There were also saucissons with hazelnuts (hey…I just realized that link is my second blog post ever.) 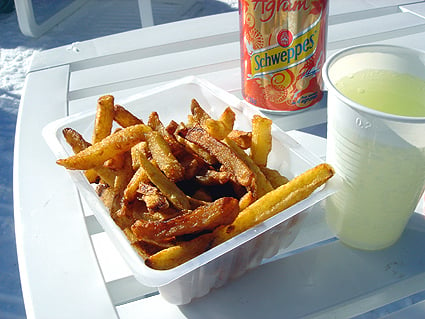 But the best meal I had wasn’t at home, but it was on top of the world. 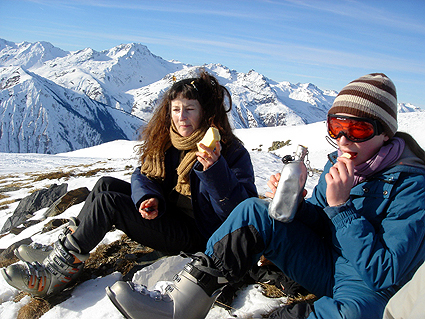 We rode up the chairlift…then two ‘eggs’ as they call the enclosed oval ski-pods…and a ‘tire-fesses’, or ‘butt-puller’, which is the actual name they call it in France, only to arrive at the top of what could only be described as one of the most perfect places in the world. 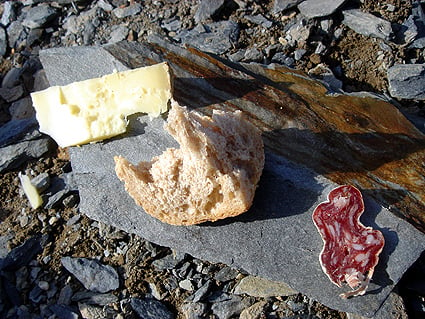 Of course, someone dropped the Opinel knife, which went sliding down an icy ravine. Which led to an all-out scaling of a treacherous snow-capped wall…hey, that cheese and salami were worth risking our life for, don’t you think? And nature was our plate, since I doubt anything could be more clean than what was up there, high above the clouds and the rest of civilization. And we dined with a 360-degree view of the French alps and the Mont Blanc off in the sparkling-clear distance.

After a long day on the slopes, my dogs were barkin’ (and my fesse was getting chapped for sitting on those cold rocks) and thankfully we were sure to stock plenty of rich, drinkable red wine on hand to pour for ourselves the moment we came inside. 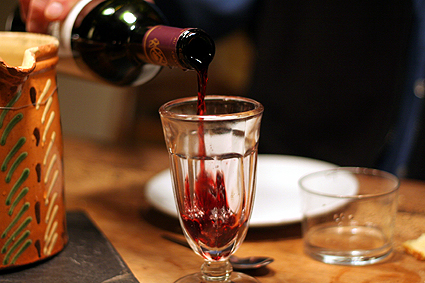 Someone had told me that Méribel was bitter cold so I’d raced around Paris the week before Christmas (mistake #1) looking for a very warm winter jacket that wasn’t a gazillion euros.

Nothing is in stock, no one really wants to help you, and you’re left with the dregs of what’s left, including lots of XXL and XXXL. Honestly, I don’t think anyone in France even wears anything larger than Large.

Still, I lucked out at one store out in Bercy Village and found a down jacket in my size that was in the wrong department, that wasn’t hideously ugly. I mean, what’s with all those prints on winter jackets, folks? But when I actually got on the slopes, I started schvitzing like I was on the beach in Aruba.

Everyday I’d peel off more clothes than a Chippendale’s dancer—minus the mullet—and was down to nothing but a t-shirt and my Nanook du Nord jacket by the end. Oy!

But girlfriend…did I look good out there on those slopes, or what!

Ok, not really.
I mean, I didn’t look as good as those teenagers speeding down the slopes. But in my defense, they were going so fast…and were so rail-thin…that all you could see was me.

Still, it was nice to be warm instead of freezing my fesse off.

Let me just tell you, after a few hours of trying to keep up with those young ‘uns, more than a couple of times I opted to head to one of the welcoming alpine lodges that dotted the mountain to repair myself with a shot of something a bit more soothing for the soul: Chartreuse Verte—a shot of herbal Chartreuse in a steaming mug of hot chocolate. 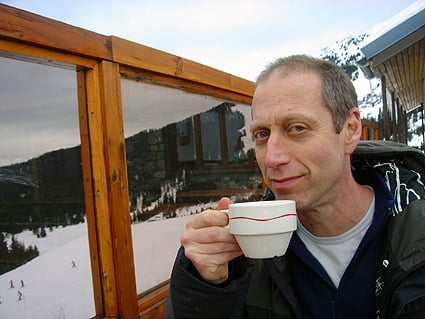 And the last day, when everyone decided to go on an extended ski promenade, I decided to stay in by the fire and do pretty much nothing. (Will you think less of me if I mention that another factor was the 8am departure time?)

So after everyone left and I finally roused myself into enjoying a quiet morning alone in the mountains, I finally took off my warm jimmies, got dressed, and took a little hike on my own. For some reason, I wound up at the local butcher shop where I had them slice me up some of their meaty-looking racks of pork ribs, which I tossed in my backpack, hiked back up to the chalet, and got to marinating pronto for our dinner. 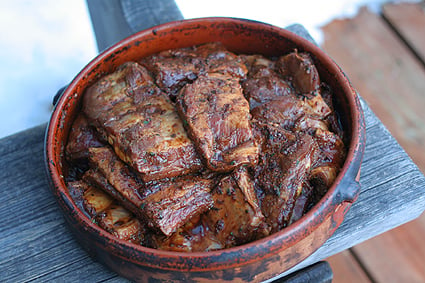 I just pulled out whatever they had on hand for the marinade from around the kitchen—soy sauce, garlic, peanut butter, the juice of a few tangerines, fresh ginger, vinegar, cocoa powder, coffee, lots of black pepper and chili powder, and of course, a nice belt of whisky. You name it, it’s in there.

When everyone got back, I never saw such happy French faces: it was either the sight of the ribs or they were just glad to be home from skiing 20 kilometers. Or they weren’t Parisians. Naturally everyone wanted to know what ingredients went into the marinade, but I think they lost interest after I reeled off the 27th one. Thank goodness I didn’t make molé!

I started roasting the ribs and once everyone pulled off their ski togs and recovered from their exhaustion, the fire got stoked and those ribs were charred to crispy, yet tender perfection. I had to let my French friends know that it’s acceptable to pick up ribs with your fingers, which a few people had a hard time doing. Old habits die hard, I guess. But those of us that did were rewarded with the best-off-the-bone scrapes of caramelized pork while the rest had to be content with trying to wield their knives-and-forks and making the best go of it they could. Suckas…

And when all is said and done, how does one end a vacation in the world’s largest wine cooler? 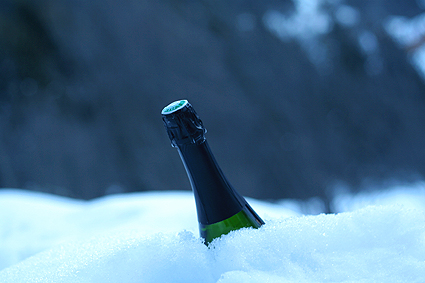 Well, there’s always plenty of Mousseaux de Savoie, a locally-made sparkling wine, to go around. Especially when I’m there. And nothing makes a finer ending to a week on the slopes, or a week in the French alps.