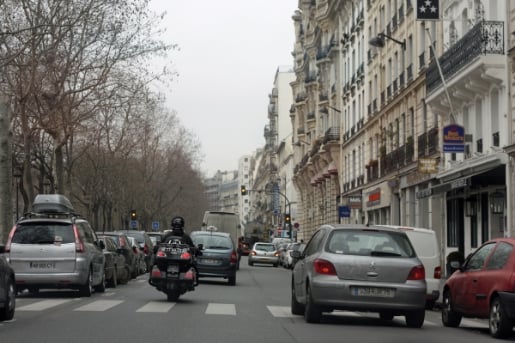 Here’s a list of the various ways for visitors to get to and from the city of Paris from Charles de Gaulle Airport (CDG), where a majority of international flights arrive and depart from. (Note that this post was updated in 2016.) Some modes of transit listed also go to Orly airport, where many domestic flights leave and arrive from.

Charles de Gaulle airport (also called Roissy) is undergoing an invigorating renovation, so give yourself extra time to catch public transit and find your way around. Even though they’ve made the airport a bit easier to navigate, it’s still confusing and things aren’t always where you might think they logically should be. On one trip, a group of us lugging our bags with followed the signs to the airport from the RER station—which led us to a solid brick wall. Ouch! And another time, leaving Paris three hours before our flight via the RER, the shuttle from the RER station near the airport, to the airport terminal, was closed and we were told to wait upstairs at street level for a bus – which never came. By the time we figured a shuttle wasn’t ever coming, we found alternative transport – but ended up missing our flight. However taxis and surface transportation can get stuck in traffic, so nothing is absolutely certain.

Depending on traffic or where you are going or coming from in Paris, the trip can take anywhere from an absolute minimum of 30 minutes – to 1 hour or more. Because schedules, fares, and hours of service change frequently, I suggest you check the website of the mode of transit you prefer for the most up-to-date information. And give yourself plenty of extra time so you don’t miss your flight.

The RER is somewhat fast and economical, and doesn’t depend on traffic patterns however the times of departure and arrival can be erratic. The RER B line, the one to Charles de Gaulle Airport, travels through some areas visitors may be uncomfortable in, on the outskirts of Paris and I’ve heard third-hand reports of pickpockets and trouble, but haven’t experienced any of them firsthand. As always when traveling anywhere, be cautious. Note that the trains are often very crowded and unventilated, although they are replacing some of the trains.

If you have a lot of luggage, schlepping through the underground métro and RER stations can be a big hassle, especially when the escalators and elevators aren’t functioning. If you do take the RER, when you arrive at the airport, you’ll need to hop on the tram (Terminal 1) or a shuttle (Terminal 2) to take you to whichever terminal you’re going to. Make a note of that before you get on so you’re not fumbling with paperwork during the scrum to get off the train.

The stations in Paris where the RER line B goes directly to the airport are: Gare du Nord, Châtelet/Les Halles, St. Michel, and Luxembourg. Some of these stations are very big and bustling so give yourself extra navigational time. (Note that the Gare du Nord is notorious for pickpockets so keep a sharp eye on your belongings – video.) Trains go approximately every 15 minutes, from around 5am to 11:40pm and note the ‘B’ line splits, so make sure the sign on the platform says that the train is headed towards the airport before you hop on. Some trains are faster than others, if they don’t make a lot of stops.

Frequent travelers might want to invest in a carnet aeroport of ten tickets, good for going to-and-from the airport. You get a discount for buying ten at once, and they don’t expire so you can use them on future trips. They can be purchased at the cashier’s desk, or in the machines, by scrolling past the single airport ticket option.

Note: If coming from a metro station in Paris, you can buy a single ticket from the machines in the station that is valid from that metro station, all the way to the airport on the RER train.

Takes 45 minutes to an hour, and leaves from the rue Scribe and rue Auber, just across from the American Express office. From Paris, if you take the métro, there’ll be signs in the Opéro station directing you where to go when you exit the train.

This is an inexpensive and relatively comfortable way to go, at around €11, and there are no staircases to contend with as there are on when taking the metro and RER. Although unless you’re staying near the Opéra, you’ll have to take transit to get to the departure area in Paris, or vice versa. The other downside is that you’re traveling on surface roads and there may be traffic, especially at rush hour (although there are special lanes within Paris for buses). Buses go every 15-20 minutes and run 5:45am until 11pm. There is a machine to buy tickets at the airport, or you can buy tickets from the driver.

The bus is inexpensive (around 17€) and comfortable, as well as relatively fast since they go on specific routes. They do travel on surface roads so travel time is subject to traffic.

Buses run every hour and the trip isn’t very rapid, so unless you’re really pinching centimes, my recommendation would be to spring for a taxi or driver late at night.

With these, you can pay in advance, online with a credit card, and you’ll be given a toll-free number to call which you do when you arrive at the airport. The operators and drivers usually speak English, but be sure to print out your confirmation with the number in case they don’t have it on record (which has happened to me).

The best part of the shuttles are that they take you right to the front door of where you’re going. The downside is that you may end up cooling your heels at the airport waiting for others to arrive, or you may be the last to be dropped off in Paris, depending on where you’re going. The cost is usually close to 39€ for one to two people. (You can tip the driver a few euros if you wish.) If there are several of you, compare the price to a taxi or driver service, such as Uber or Le Cab. (See below.)

A few I’ve taken are Bluvan and Yellow Airport Shuttle. You can search for others online. One I’ve had particularly good luck with is Bee Shuttle which offers a “First Class” shared option (€45), promising only two stops. And there is SuperShuttle, too.

A recent addition to the Paris airport transit scene is EasyBus, an offshoot of the low-cost EasyJet airline. Fares start at just €2 and go to specific drop-off points in Paris.

This private driver service boasts clean, efficient cars equipped with iPads, and pleasant drivers. For a fixed fee, often for less than a cab, you can get to or from any airport in Paris. If being picked up at the airport, the Le Cab driver will be waiting inside the terminal for you with a sign to take you where you are going. Recommended. (Be sure to reserve in advance as the service is popular.) The iPad will prompt you to leave a tip if you wish. Anywhere between 5-10%, depending on service, is a nice gesture. There is no luggage fee. Another company, Le Chauffeur Privé, is a French company that offers similar service. Both services allow you to reserve in advance via their website.

The globally popular Uber offers several options in Paris, from Uber X (a nice car) to UberBERLINE (a nicer car). They also have vans, too. Recently they’ve added UberPool which pairs you up with another rider going in the same direction as you are. Prices are fixed (with tips included), but you can’t order one in advance to or from the airport; you’ll have to use the app to order one. Drivers speak French and may speak some English, although it’s not guaranteed. There is no luggage fee.

You can get a taxi from the stand at the airport, although there can be a line waiting. In general, the fare to CDG is between 45-65€ and there’s a surcharge for each piece of luggage. Drivers will only take 3 people maximum unless they have a van.

From Paris, you can hail a cab although they’re technically not supposed to stop anywhere except at taxi stands. Since cabs can be scarce, especially in bad weather or during busy times, the hotel can call you a cab. Be aware that in Paris, the meter starts when the driver gets the call, so don’t be surprised to find a few euros (or more) on the tab when they show up. There is also a minimum charge in Paris of €6,60. (You can scope out the cab stand near your hotel the night before and see if it’s well-occupied which will give you an idea of availability the next day.) Although taxis are required to have credit card machines, those curiously go out-of-order often, so be prepared with cash. (Driver’s are often low on change as well, so have small bills.) While a service charge is included, if you were happy with the service, you can give 5-10% extra, or round it up.

Other taxi options are G7 taxis direct, which allows you to order a cab in advance online and is the best of the lot. Their website has an English-speaking phone number and G7 also has over 100 wheelchair accessible taxis available (with advanced notice) and also offers WeCab, a shared cab service for a lower price. Les Taxis Bleus has a bi-lingual website as well. Allocab offers standard taxi service, private drivers, and for the daring, motorcycles which take you to the airport, claiming they are faster than other surface transportation as they can get through traffic easier.

(As of March 2016, Paris taxis are obligated to charge a fixed from the airport to and from Paris, according to France24, part of the French international broadcasting service..)

Note: All prices and information are subject to change and are noted just for informational purposes. Best to check the websites of the various operators for the most up-to-date information.

More of my Paris Travel Tips