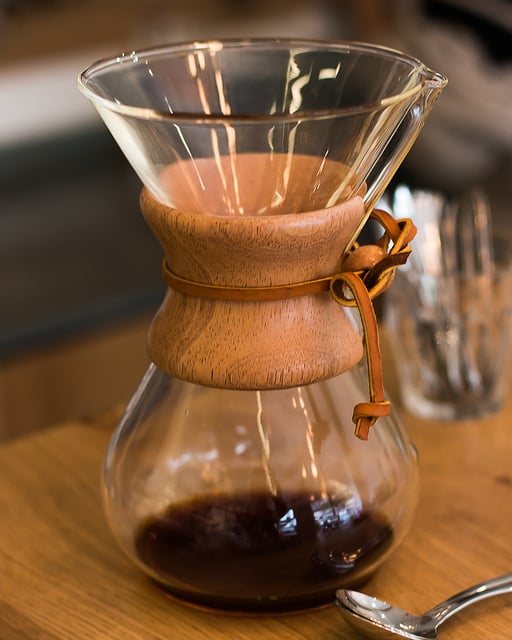 UPDATE: SInce I first published this, Belleville Brûlerie has moved to a large location with a shop. More info at their website. They have also opened a café, La Fontaine de Belleville.

Hoo-boy, do I remember the bunch of flack (to say the least!) for mentioning way-back-when that the coffee in Paris could use a bit of, um, upgrading. I was recently reminiscing about that with my friend Pim, who wrote about it in 2005. People were up in arms, which was a little bizarre since the French often refer to café coffee as jus de chausettes, or “sock juice.” 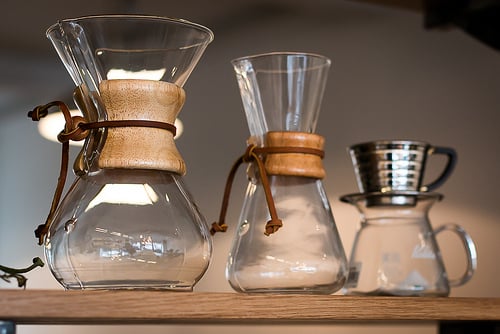 If you’ve been to Paris, you know that there are lots of cafés but the quality of the coffee isn’t the focus. However, like all cities, Paris evolves, and in the past few years, a whole battalion of younger folks, some French, and others from elsewhere, have opened shops sprouted up far and wide, at a rate that was so fast, that I couldn’t possibly try them all. (And with all that caffeine surging through my system, I would have lost 6 1/2 years of sleep.) And other people were doing such a good job of cataloging them all, that I just sat back and focused on other things. 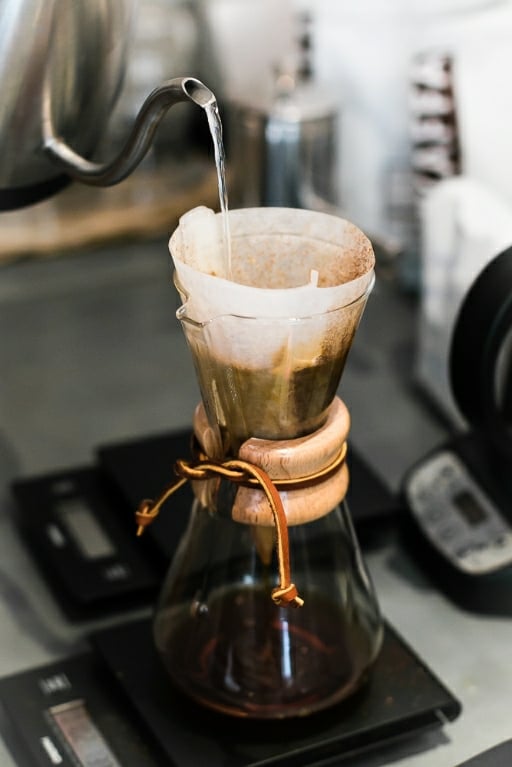 Being from San Francisco, where coffee-culture can be obsessive compulsive – if you didn’t study the micron size of each granule of coffee grinds or have your water analyzed to ensure your coffee was as clear as a sleek Chemex carafe – you, and your coffee, simply weren’t up to snuff. I went to espresso school in Italy, where I watched and learned from the Italian experts how the seemingly simple task of extracting a perfect espresso actually depended on having mastered a few key techniques and having the right grinder and espresso machine.

When I lived in San Francisco, I religiously ground my own coffee every morning (in a burr mill, thank you very much). But I got tired of the noise, wiping the grains of coffee off the white tiled floor (which the previous residents had installed; I guess they didn’t grind their own coffee…or make toast) and the counter.

Then I got tired of feeling like no matter how concerned I was about the coffee I was drinking, I wasn’t doing it right. There was always someone who was roasting his own green beans, who had a fancier grinder, or who sourced her coffee from the northeasternmost tip of a small island off the coast of Krakatoa. No matter what you were doing, someone was sure to point out to you that there was another place you should be going to, or another way you should be preparing it. 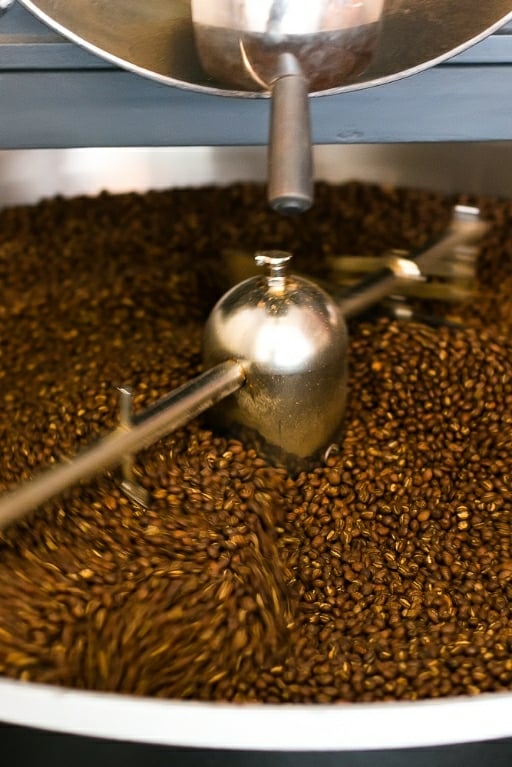 In Paris, the coffee sold at most of the roasteries wasn’t really any better than what you could buy pre-packaged, so I settled for those. And when I went to Italy, I would pack any spaces in my suitcase with 500g (about a pound) packages of coffee, and savor them for a few months after my trip.

My first inkling that things had changed dramatically in Paris was when I heard about Belleville Brûlerie. I started following them online, as they showed the weekly progress of building a place of torrefaction on a little street atop Belleville. While I was walking from the Pyrénees métro station on a blustery Paris morning, as I reached the intersection of Avenue Simon Bolivar and Rue Pradier, where the Brûlerie is located, I wasn’t sure if I should head up the hill, or down. But the answer was, indeed, blowing in the wind, and I followed my nose toward the roasting beans, down the small street to the glassed-in coffee roaster. 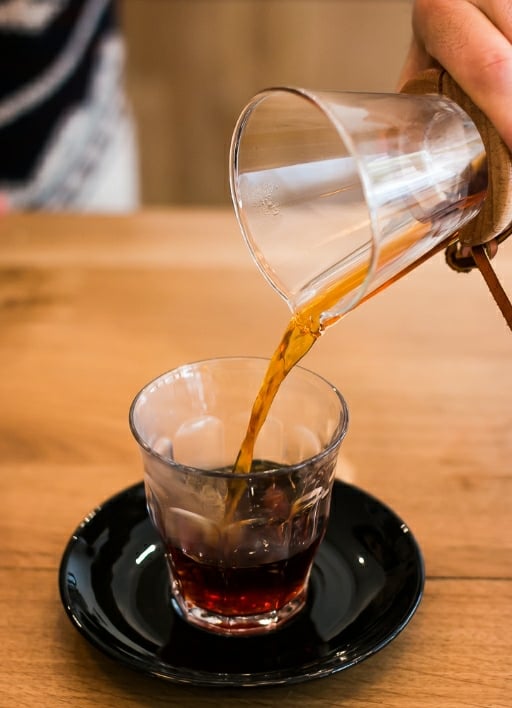 In addition to changing my tune about grinding and obsessing over each cup of coffee, as a dedicated espresso-drinker, I sneered at those who drank filtered coffee. Also those huge mugs of coffee were so caffeinated, they gave me the jitters. (Because of the quick extraction, and size, espresso has less caffeine than drip or filtered coffee.) But I haven’t been as excited about the espresso shots I’ve had in the coffee shops in Paris (new and old) and started to change my tune about coffee, realizing (like Adam), that maybe I need to shift my priorities, and not expect so much from espresso (unless I’m in Italy), and move to filter, the method seemingly preferred by many of the current wave of coffee shops in Paris.

Only open on Saturday mornings, and focusing on filtered coffee, Brûlerie Belleville holds tastings that are open to any and all who are interested in sniffing and tasting their single-origin, just-roasted coffees. The three owners; Thomas, David, and Anselme, do everything in the shop, from presiding over the roasting of the beans, to tending the tasting bar. I’ll be heading up there more Saturday mornings but now I have another place to get the grinds for my home brew. (But as a courtesy to others, only after I’ve had that all-important first coffee at home.) 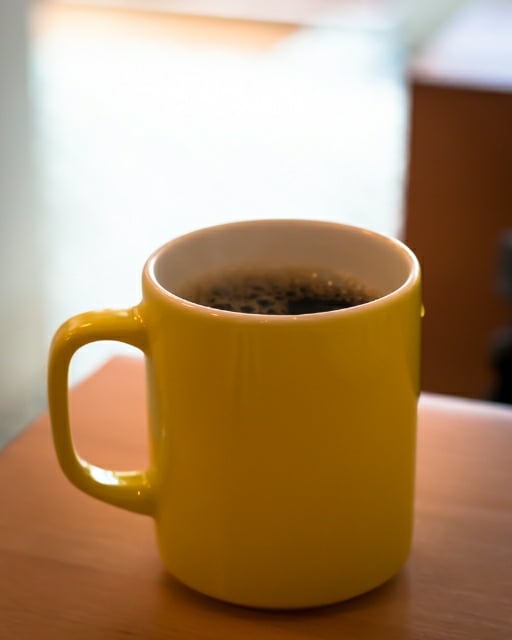 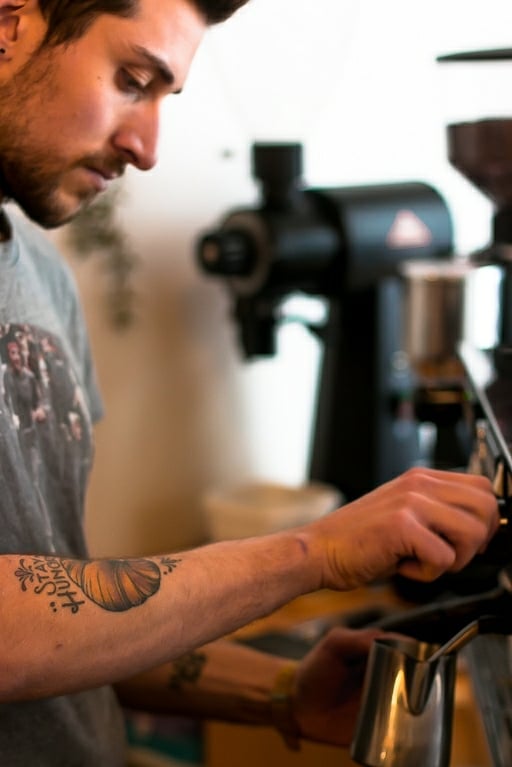 In addition to the stereotype about all the coffee being bad in Paris, another one is the image of the not-so-nice Frenchman. Aside from the one I have at home, Nicolas Allary, the owner is Holybelly is one of the friendliest people I’ve met in Paris.

I’d been trying to go to Holybelly for a while and – as is the custom – whenever I try to go somewhere, they just happen to be closed for a fermeture exceptionnelle. The first time I tried to go to Holybelly, it was the period after Christmas when just about everything else is closed. When I posted the second time sign on my Instagram feed, someone made a comment about French working habits and instead of responding like so often people do online, Nico replied with a good-natured apology. And let me tell you, unlike good coffee and nice Frenchmen, apologies are still the exception (like pinball machines), rather than the rule around here. 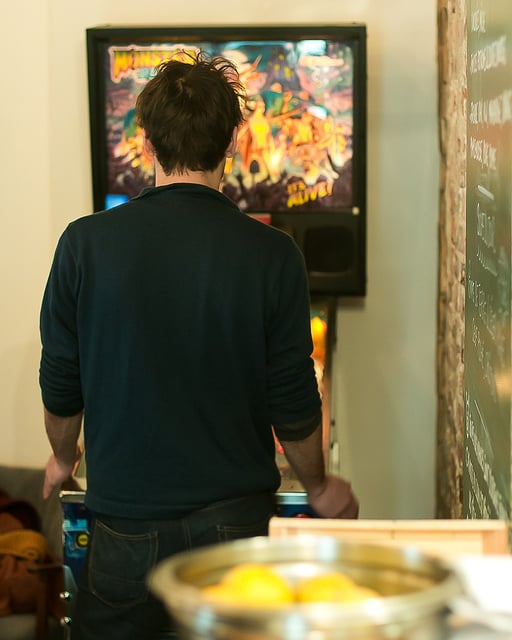 As luck would have it, I got invited to a Pinterest party at Holybelly, and I marked the date in indelible ink in my calendar, because I was sure that they’d be open. It was fun and nice to catch up with a bunch of women friends that I hadn’t seen in a while. (Being a Pinterest fête, I was one of three men, in a crowd of about thirty women, and I passed on the workshop for making homemade skin care products.)

Someone at the party took me to task for mentioning that a lot of the new, celebrated restaurants in Paris were either opened by cooks who weren’t French, or who were French but had worked abroad, but I don’t really care who makes what I’m eating, or where they are from. I just care if the food is good and fresh. 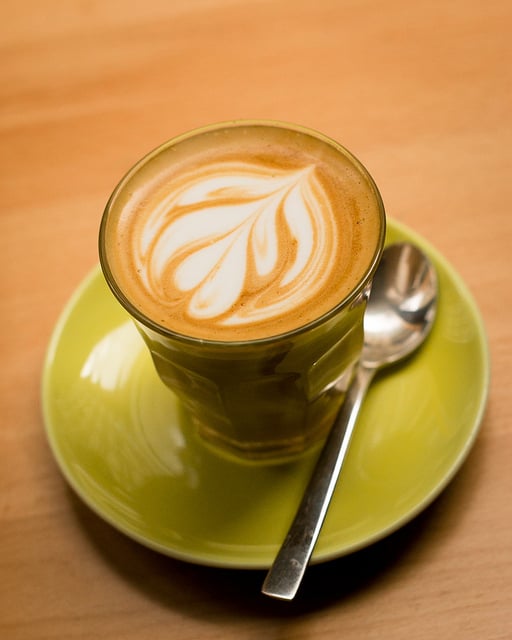 The cooks in the kitchen at Holybelly, two charming women whose passports I didn’t scan, cook up food using local ingredients as much as possible. In a trend that restaurants in Paris are starting to embrace, Holybelly notes on its menu that nothing is frozen or microwaved, nor are they serving cuisine Metro, named for a chain wholesaler of pre-packaged foods. 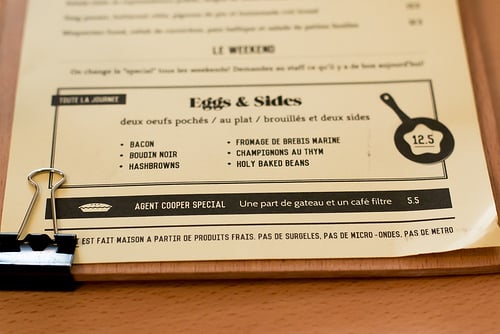 As Nico wrote on his Facebook page: “I think in the end, ‘homemade logo‘ or not, people appreciate and recognize quality in the plate and they come back for it. Sarah and Lise (the cooks) make everything from scratch everyday and that’s why the café is busy, even though we opened recently, because we care, because we don’t cut corners and because we dish out real food.”

And he’s right; the place is packed. I went back for lunch during the week, getting there well before noon. And by the time I left, there was a small crowd outside the door, waiting for a table. 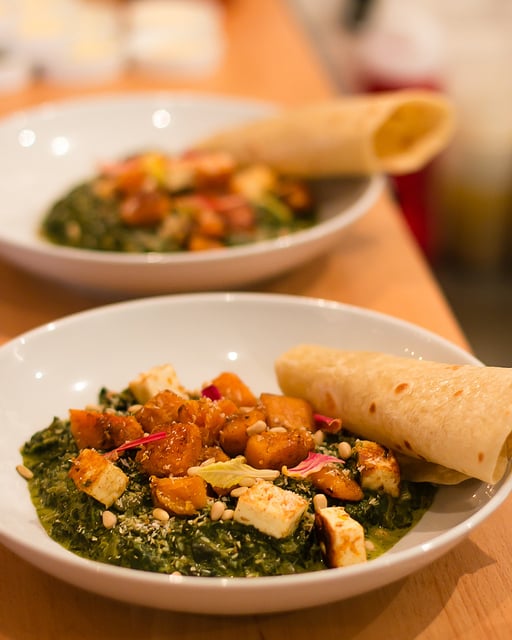 The menu changes often, and when I went for lunch, I was tempted by the open-faced smoked mackerel sandwiches served on grainy Nordic bread from Liberté bakery on the corner (39, rue des Vinaigriers), and Saag paneer with pan-roasted butternut squash on a bed of spinach with house-made flat bread, griddled to order. 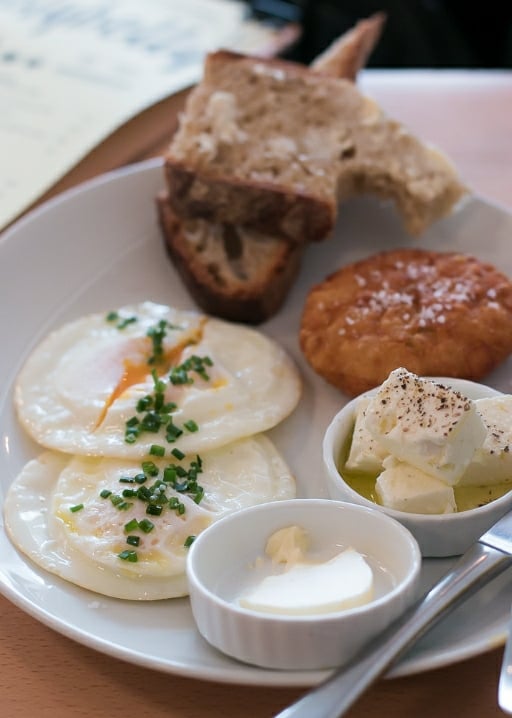 I hadn’t had a good ol’ American-style breakfast in a long, long time. And with a generous cup of filtered coffee (made with water they purify beneath the shop), my eggs came out perfectly cooked along with toast, made from bread baked just up the street. The Échiré, French-made butter for the toast was hard not to smear directly on my tongue, and the little cubes of marinated sheeps’ milk cheese gave me the little bit of salt that I remembered from my breakfasts in Israel and Lebanon. 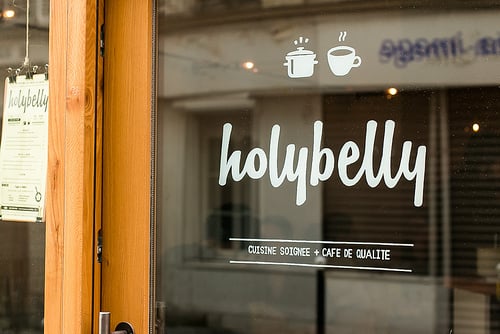 I sat in the small wooden booth sipping my Himalayan (not Krakatoan) coffee, watching servers delivering food to the tables, and Nico tending the bar, pulling shots of espresso and filling cups with steaming dark brew. (All the water in the shop is specially filtered, and raw milk is used for the coffee drinks.) As I sat there and polished off the last of my coffee, with the cooks happily buzzing away in the kitchen, efficiently preparing beautiful plates of food- -no doubt fueled by Belleville Brûlerie coffee – I was delighted to see how the next wave of young talent was succeeding in Paris. And crafting their own set of standards for the future. 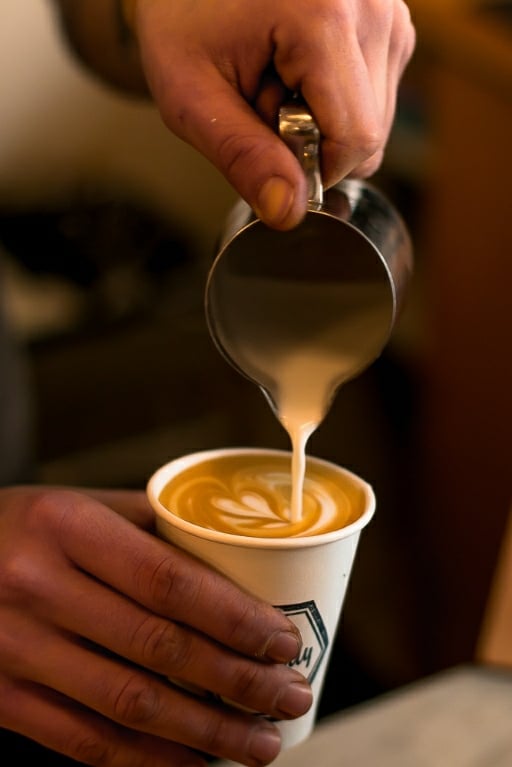 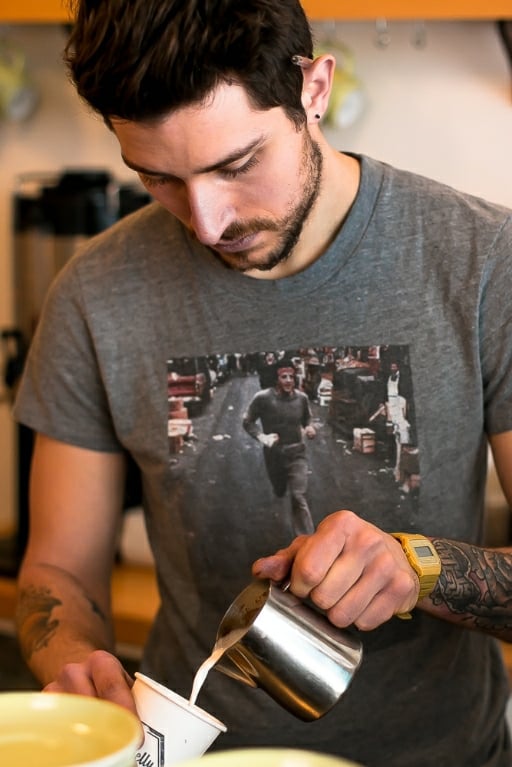 The team at Belleville Brûlerie have opened La Fontaine de Belleville, a café serving their coffee and food.

Holybelly also has a second restaurant at 19, rue Lucien Sampaix which serves smaller, shared-plates meals. Note that on weekends, lines at the main Holybelly, now known as HolyBelly 5, can be long as it’s become quite popular. They do not take reservations.

Where to find a good cup of coffee in Paris

Why is coffee in France la merde? (Roads and Kingdoms) 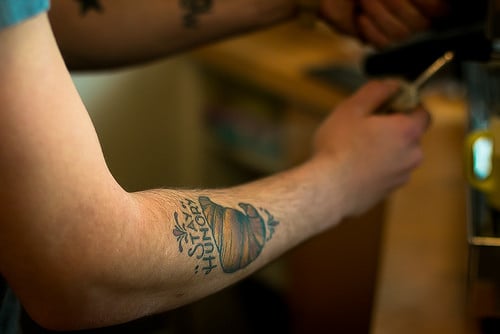