We’ve had some really nasty weather in Paris during last couple of weeks. Some days were so bitter, dark, and cold that even though I had my heater on full blast, I was bundled up a wool coat and scarf inside of my apartment. And you know it’s really cold in Paris when the normally indifferent teenagers (who wouldn’t be caught dead wearing anything but a t-shirt and perhaps a down vest, no matter how bone-chilling cold it was), were bundled up in hats and scarves. Chic women had gone into survival mode, slipping off fashionable pumps and wearing bulky winter boots, with their faces tucked under hats with long side flaps.

For about a week I thought there was a national holiday because the streets and outdoor markets were deserted. Hardly anyone was in the bakeries buying bread or on the sidewalks. But no, it was just too cold for anyone to even think about going outside.

Then, this morning I woke up and the sky was blue and it was so warm that I could open the window and breath in some of the fresh air, hopefully signally that spring is almost around the corner. It also prompted some thinking today about a few things I’ve been considering, which I’ve decided to put them in action, some involving changes to the blog. A few you likely won’t notice, but there’ll be a few more substantial ones in the coming weeks.

The technical stuff (ie: the stuff you, fortunately, can’t see) has finally won its battle against me and I never dreamed I would be squinting at a screen for hours trying to figure out how to configure servers, write recipes in html code, decipher what the heck is an Apache error, or why mSQL matters. Last fall I made a major change to the site by moving to another blogging platform as I was no longer able to find support for the one I was using. However there were massive technical glitches and I spent weeks trying figure out what was wrong and how to fix it, which included many nights of being awake at 4am just so I could work with people as far away as in New Zealand and in the San Francisco Bay Area.

I am a baker and I started the site to share stories and recipes, and now I want to get back to what I do, namely sticking my hands in flour and writing about places in Paris that I think others might like more informally. And while the technical glitches are still there, I’m hoping they’re minimized and am working with a talented team that I hope will fix them for good. (I am hoping that sound out there is the sound of crossing fingers.)

I’ve been thinking about this for the last couple of weeks, as I’ve been sitting on some posts that are resting in my queue, waiting to be published. However I’ve been terrified of hitting the Publish button because they’re not pristine. I haven’t closed all the points and arguments that are sure to arise, I’m certain there is at least one syntax error, and I probably wrote “it’s” instead of “its” by accident somewhere in that 8603 word document.

For the past couple of years I’ve decided to focus on the blog because I’ve really enjoyed doing it. For one reason, I like the freedom and I can share anything instantly, without someone telling me “no” or “Our sales team thinks that readers won’t want to read about a crêperie in Paris run by Japanese women dressed in all-pink who look like they just stepped out of Harajuku.”

However what that means is that unlike in books or magazine articles, there is no editor, nor is there a copyeditor or proofreader; it’s (not its) just me and my computer. I’ve also been having some vision problems lately, and as much as I try to read and re-read every post dozens of times (yes, really), things go up with goofs and glitches. But the main thing I’ve learned living in a foreign country is that no matter how hard you try, you not going succeed all the time and you’re going to make mistakes. You can agonize over it, and it might not make others happy either, but in the words of the great Miss Diana Ross; “There ain’t nothin’ you can do about it.”

Blog have changed and evolved, and in some cases, became “showpieces”, and you can read articles about how to blog, and all that you have to do. (And one of those unpublished posts of mine talks about that). And that’s all great and something to consider. But on the other hand, as I get older, I realize what’s important and what isn’t. Is it more important to re-read a post with eagle-eyes like a madman before I hit the publish button? Or should I walk over the Berthillon for a scoop of caramel ice cream? Do I want to spend the weekend figuring out how to code a page, or do I want to hit a flea market or catch up with a good friend at a café for lunch?

I know a certain number of bloggers have hired copyeditors and I had this same discussion with another blogger the other day. But to be honest, what I like about blogging is the raw nature of getting stories and recipes out, rather than planning weeks in advance and going through layers of people before I finally put something up on the site weeks after the idea was fresh in my head. Although even books and magazines have errors, but in those places at least writers can blame their editors ; )

(I met with some blog platform developers a while back who were interested in the steps I took to write and publish a post, and I didn’t realize how involved it was until I spent a little too long explaining to them the trail of steps that I take before I hit “Publish.” They were hard-core web people and they almost dropped their laptops.)

So in future posts, although I do my darndest to make sure everything is spiffy, like a tart whose crust isn’t perfectly even or an apple with a blemish, that’s what I offer readers. And as much as I love sifting through html codes and figuring out if a period goes inside or outside quotation marks (which depends on where you live), in the future, I’ll be moving the blog in various directions, some familiar—but expect a few twists and turns along le route.

The scourge of the universe, spam has overrun the comments in older posts, or they’ve become questions that are seemingly obvious. So unfortunately I’ve had to turn those off. If you go to an older post and there’s nowhere to comment, it’s because the site gets over 3000 spam comments a day (yes, really…), and as much as I’d love a to have a manhood that will “poke her eye out”, if everyone who read the site had the same wish as I do, there would be too many women walking around with eye patches.

I love comments and have learned more than I have ever imagined about your various cultures and countries, places I previously knew nothing about, and the interaction with you all is one of the things that I enjoy most about the blog. I’ve been taught by you about food and customs from other countries, I’ve learned language and cultural lessons about France and other European countries, quite a few of you have given me really good laughs (I hope, intentionally!) and I’ve even made some really good friends, both virtual and in real life.

But I’ve also been inundated by messages asking about modifying recipes and have found myself now writing posts composed almost entirely of phrases like, “Some bakers might ask if they can replace the chocolate with beef fat”, because I am sure someone might ask me that.

I understand and respect tinkering with recipes, and love to hear how people modify recipes to make them work for specific diets and situations. No one is more frustrated than I am when I want to make something and can’t find the ingredients. And I realize there are people from different places that don’t have access to the same ingredients or equipment as I do. However instead of me writing paragraphs and paragraphs on what you can and can’t do to the recipes, I’d rather people also learn to trust their instinct and use recipes as inspiration, and prefer to write a story about the recipe, or what prompted me to share it with you.

I’ve learned that those who are on special diets, like my gluten-free and vegetarians friends and such, are generally better equipped than I am at figuring out how to make substitutions and adjustments. For more about this, please refer to my Baking Equipment and Ingredient Substitutions.

Regarding authenticity of recipes on the site, I live in a country where things from other places are often, um, modified for local tastes. I don’t always agree with the results (especially when I see canned corn on a Caesar Salad) and I go on about it sometimes as well, but that’s that and it’s not the end of the world. As horrible as things like cheese, papaya and lobster quesadillas sound, instead of getting upset, they make me laugh.

Perhaps it’s an American thing to want to reproduce what we like and to be inquisitive about the food of other cultures. Or maybe because I worked in restaurants that featured American, French, Italian, Southeast Asian, and vegetarian food at various stages of my professional cooking career. On the site, I will often play around with foods from Asian, Central America, and European countries outside of France. I know not everyone is comfortable with people modifying dishes to suit their circumstances. But there’s not much I can do about it, unless I subsist on croissants and Comté cheese. And as much as I like them, often I need me some kimchi or Kosher dill pickles.

So my project this weekend is to do some spring cleaning and tossing out a few unnecessary things. I’ve also got a big pot of marmalade on my stove (that doesn’t seem to want to jell), a pan bar cookies waiting to be cut up (and sampled). But most important of all, I’m making a batch of Rice Krispies Treats to bring to a brunch Américain this weekend that a French friend of mine is hosting. And in case anyone wants to know, like their American counterparts, French Rice Krispies also contain prizes. But for the life of me, I’m trying to figure out what mine is… 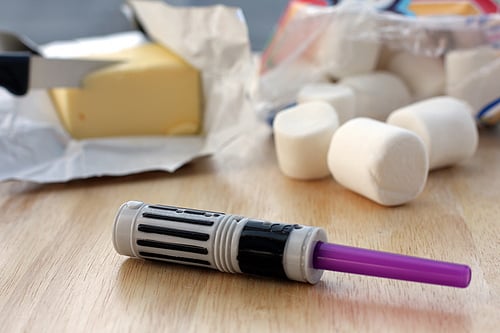