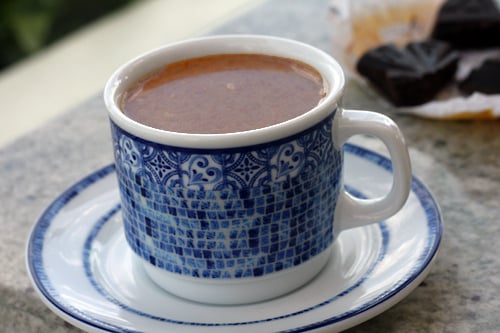 I was a little perplexed as to what constitutes authentic Mexican Hot Chocolate. Thankfully a reader from Mexico explained to me that unlike other hot chocolate “drinks” in the Mexican repertoire, it traditionally was a mixture of cocoa beans and sweetener. Yet nowadays folks generally use sweet chocolate bars as a base, which are made from coarsely ground chocolate with a dose of cinnamon and sugar, and sometimes almonds, and are conveniently sold in tablets or bars in Mexican shops.

That chocolate bears a passing resemblance to the coarse chocolate that Mexicans have been grinding up in metates for thousands of years (which I think is why Mexican women have those power shoulders), and today you can find Mexican chocolate quite a bit slicker than the stuff that was (and still is, in some places) pounded for hours and hours. Although I’m not Mexican in any way, I have a deep love of anything edible, and drinkable, that’s Mexican—from horchata, to the twirly green bottle of citrusy Squirt soda that are fun to swill on a Mexican beach, along with a basket of chips and some spicy roasted chili salsa. Or guacamole. Or duck tacos. Or ceviche. Or all of them. 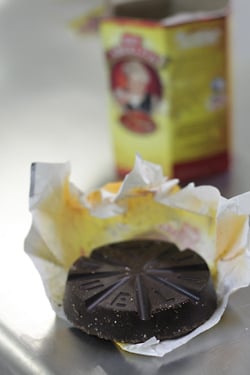 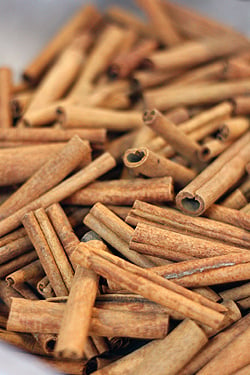 The chocolate used nowadays for hot chocolate is classified in America as “Sweet Chocolate”, which is different than what we label as bittersweet or semisweet chocolate.

Sweet chocolate only has to have 15% cacao solids whereas the other chocolates have over twice as much. The primary ingredient is sugar followed by chocolate and cinnamon or other flavorings. In spite of the added sugar, it’s what people use as a base for a chocolate-flavored atole and Mexican hot chocolate. 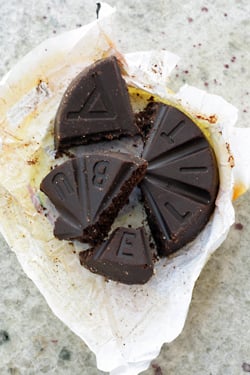 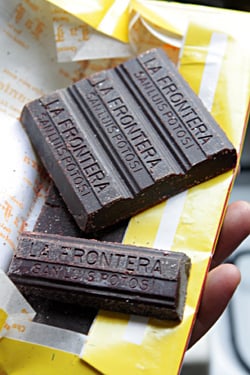 Although I got a lesson in making champurrado (hot chocolate atole made with cornstarch or masa) on a recent trip to Mexico, a kind young hombre gifted me a lovely tablet of La Frontera Mexican chocolate after I returned north of the border, to Houston. And when I got home and decided to make myself a cup of Mexican hot chocolate, I was amused to find the recipe on the back of the package called for 8 cups (2l) of milk for the 7 ounce (200g) bar, which is a tad less than an ounce of chocolate (and sweet chocolate, at that…) per cup. 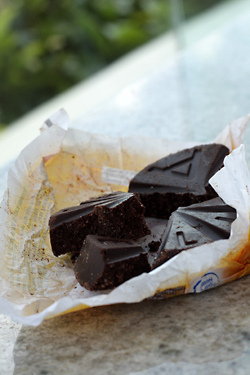 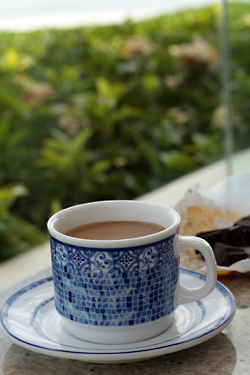 I have to admit that I like my hot chocolate a little stronger than that, and less sweet. But there’s something endearing about that crumbly Mexican chocolate that crinkles with sugar when you snap pieces off. So I upped the proportion of Mexican chocolate and added some unsweetened cocoa powder, which brought up the chocolate flavor and richness to where I like it. So perhaps I should call is Mexican-American hot chocolate, as it combines the best of both worlds in one steamy cup.

Note that I made this with Mexican drinking (sweet) chocolate. If you’re looking for a recipe made with semisweet or bittersweet chocolate, check out my Parisian and Belgian hot chocolate recipes. Some folks think that Mexican hot chocolate has chile powder in it, but from what I’ve read, I’m not entirely sure. So I left it out. But if you want to spice it up, add up to 1/4 teaspoon chile powder to each cup (250ml) of milk when heating it up, or add it to taste at the end. You could also infuse a stick of cinnamon in the milk to give the hot chocolate a more pronounced cinnamon flavor. A dash of Kahlúa might be nice on a cold winter night, too.
2 cups (500ml) whole milk
4 tablespoons (25g) unsweetened cocoa powder, natural or Dutch-process
pinch of salt
3 ounces (85g) Mexican sweet chocolate, chopped (see Notes)
1. In a medium saucepan, heat the milk with the cocoa powder and salt, whisking constantly until it comes to a full boil.
2. Remove from heat and add the chocolate, whisking gently until it’s completely melted. If desired, blend the mixture with an immersion blender, a whisk, or molinillo until smooth.
3. Serve warm.

Notes: I used La Frontera chocolate, although Ibarra is another frequently used Mexican-style chocolate. Taza, an American bean-to-bar chocolate maker, has a line of stone-ground Mexican chocolates as well.

I made this with whole milk but I’m certain a nut or soy milk would work fine. I have not made it with lowfat milk but have seen recipes that use milk and water, so it would likely work. If you do experiment, or have your own versions, please feel free to share the results in the comments.