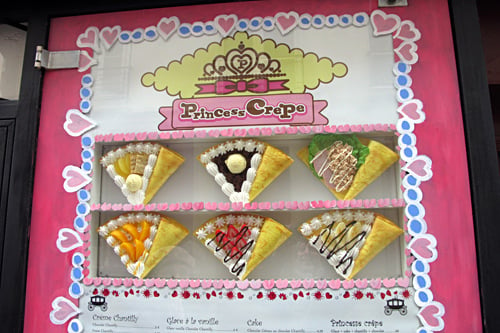 I wasn’t on planning on going to Princess Crêpe, which I’d passed a while back and was intrigued (for lack of a better word) by their unusual look. Well it was “different”, as my mother used to politely make me say when something was out-of-the-ordinary. If we were in Harajuku, it’d fit right in. But in Paris, this is decidedly different from the rest of the surrounding area, the Marais.

I’d gone by the place a few times in the morning and they have “different” hours, open from 1pm and closing up a few hours later at 7pm. So basically they open after lunch and close just before dinner. 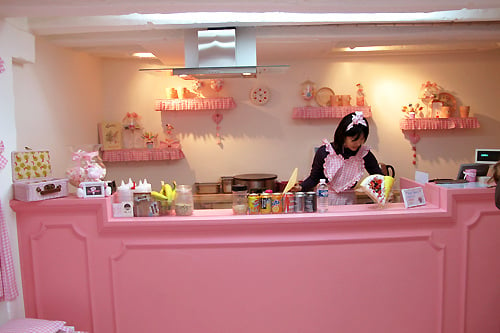 However our timing was right today after lunch as we’d just wolfed down two of the jumbo burgers at Schwartz’s Deli, which weren’t bad at all; they were actually made from freshly formed beef patties, not the usual frozen disks. And the frites, while also previously frozen, were crisp. However I still can’t understand why places insist on using supermarket buns in a city rife with great bakeries. But no one else seems to mind, so I’ll shut my bec.

On the walk back down the same street, bundled up and shielding ourselves against the savage cold, we looked up and the steely grey of Paris was punctuated by a bright pink beacon of optimism: Princess Crepe was open. 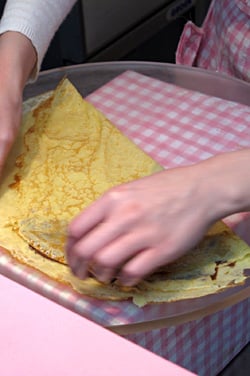 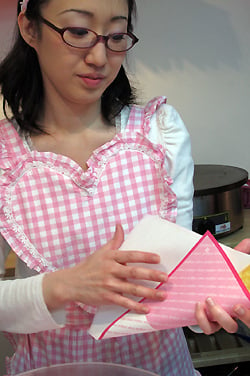 We weren’t terribly hungry, but there we were, and there they were, wearing their fuzzy pink bunny ears, and it was a little hard to resist stepping inside. Like the best crêperies and crêpe stands in Paris, the crêpes are made to order. It seemed like they were still figuring it all out, as one woman spread the batter over the griddle, going back over it a few times to patch any raggedy edges (I’m not going to point out anyone else’s faults on that front) and another spread the filling on, folded the crêpe up, and handed it over.

I had a butter and sugar crêpe, and my lunch partner took Nutella. Grasping the hot treats, wrapped up in their—yes, you guessed it—pink paper cones, we sat for a moment in the shop nibbling on our crêpes, until I’d had enough pink, and we headed back into the cold to finish off our desserts.

I think I’m used to buckwheat galettes (crêpes), which I prefer, even for dessert. And these were kind of sweet, and I’m not just talking about the staff or the decor. Princess Crepe kind of has all the makings of a pop-up restaurant, and I wish them much success with their crêpes. Because I’m getting a little tired of being the one who’s the most “different” in this town. And I’m happy to let someone else have a turn.