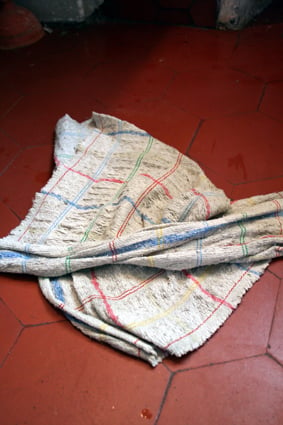 What are the absolute last words you want to hear when invited to someone’s home for a meal?

One such phrase was:“We had some fish that was about to go bad, so we’re having it for dinner.”

Welcome to my world, which you thought was all baguettes and chocolate, but also (sometimes) includes dubious fish, too.

The rules for hygiene may be quite different when you move to another country. I was pretty surprised to see on my trip to the U.S. in June, little bottles of hand-sanitizer dangling from people’s belts and fanny packs, as well as available in supermarkets with towelettes* to wipe down the handles on shopping carts. But I’m equally interested that some say it’s okay to leave stock on the counter for a day or two before using. (They use stock in science labs to grow bacteria since it’s such an inviting medium. So I’m going to continue chilling my down, then refrigerating it.)

Although some think we might need those little bottles of sanitizer around here pretty soon for Vélib’ hands (below), using the new bike-sharing service, after riding around Paris for a few weeks, I’m almost inclined to keep some of that hand sanitizer on hand after riding around town for the past few weeks. 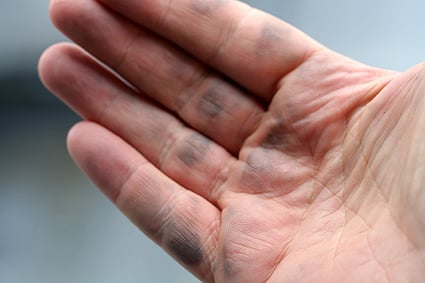 Although I’ve taken several courses in food sanitation, sometimes I need to suspend logic and just go with the flow. (The fish, though, I pushed aside on my plate.)

I spent a fair amount of time in the French countryside this summer, we went to a local farm store that sells their own dairy products; mostly yogurt and fresh raw cream, but also some meat. My French hosts were aghast that they stored the raw and cured meats in the same refrigerated case as the yogurt and cheese. These were the same people who’d offered me the dernier jour fish for lunch…just to let you know.

When I asked why it was wrong to store them in the same case, they said it was bad for microbial transmission. When I mentioned that it was highly unlikely that microbes were going to walk a few feet across the refrigerator shelf, which I demonstrated by marching my two fingers across their dining room table, I noticed a flash of understanding from them. Although rather than admit there might be some holes in their logic, they came back with, “Well, you don’t want someone handling meat after handling dairy, do you?”

OKay, that’s true, but I don’t know how that’s any worse than at the charcuteries, which sells pork products as well as dry sausages and cooked slices of ham, and I’ve not seen the employees wash their hands, their knives, or the slicing machine, between handling products. Okay, sometimes they wipe their knives on their aprons, but not sure how much bacteria the fabric on their apron kills.

So I asked, “Well, are you concerned at the charcuterie where they handle raw pork, then handle ham and pâté, and in between serving them, they just wipe their hands on a towel or their apron? In all likelihood, you’re eating the pâté that’s been in nearly direct contact with the same microbes as raw pork?”  That got shrugged off, too. C’est comme ça. 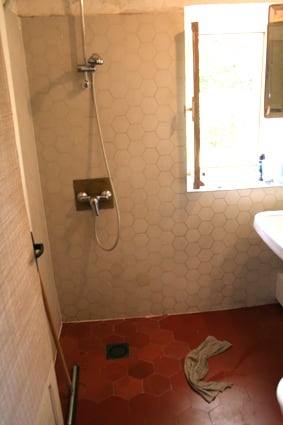 Another suspension of logic is needed when you sometimes take a shower. If you live in an older place, as I do, when you flush the toilet and only a trickle of water dribbles out to wash everything away (which often doesn’t do the trick, hence the toilet brushes next to all the toilets), or you’re faced with a shower that’s basically a hole in the floor with a rag to keep the water from going all over the place, you realize that all those beautifully-designed European bathrooms you see in design magazines and on Pinterest only seem to exist on paper, or in cyberspace. I mean, where are les serpillières? 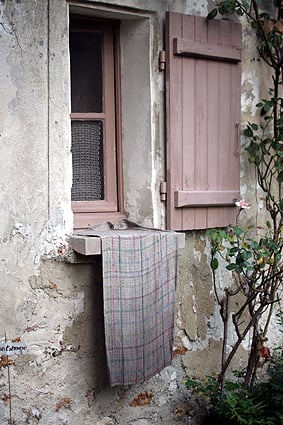 What is a serpillière you ask? Take a walk down the streets of Paris and you’ll see them lying in the road in a soggy wad, or rolled up in a bâton, to direct water to the nearest sewer. I know, I know. It seems archaic that a country with the most magnificent high-speed train system on the planet, who developed supersonic air transport, pioneered cyber-sharing of information, and hosts the world’s largest start-up incubator, and are the world leaders in medical research and practice, still use grungy, funky rags to control water. And I have a hard time touching one.

But in France, they stays loyal to those grey, water-soaked rags, and they drag and trail them around from room-to-room, and street-to-street. Although it’s been quite a few years – a couple of hundred, I think – when Paris was a muddy marsh, it’s not at all rare today to see one wadded up in someone’s kitchen or bathroom like a murky security blanket.

I have, however, come to love ‘the hose’ that Europeans favor for taking a shower, but also can’t fathom why many hotels in Europe don’t provide shower curtains? All it takes is a split-second of reaching for the soap to misdirect the spray, then you’ve soaked the toilet paper, your toiletries, and your dry, neatly-folded jammies. And since they rarely provide a holder for ‘the hose’, good luck in trying to put it down somewhere while soaping up.

Perhaps you’re supposed to turn it off while soaping up, then back on again to rinse, but in my apartment it takes five minutes for the hot water to reach the nozzle from the time I flip it on, and only lasts a few moments before returning to cold, so I ain’t standing there freezing my butt off while waiting for hot water to reappear.

I just can’t seem to master the switching of hands back-and-forth with the hose spraying water everywhere while trying to soap myself up. And if you foolishly lay it down in the bathtub, it invariably flips over like a sprinkler and shoots water everywhere. Then you need to mop it up, hence the nearby serpillière. 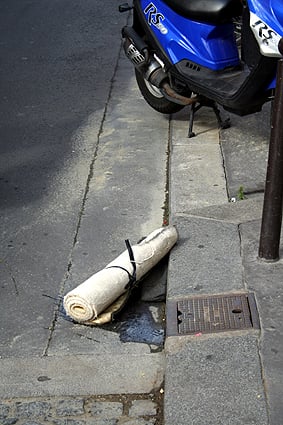 So next time you’re in France, if you really want to pick up something that’s very French as a souvenir, skip the Ladurée macarons, the snow globes of the Eiffel Tower, or the Mona Lisa t-shirts sold on the rue Rivoli, and bring home une serpillière…if you can bring yourself to touch it.

[*This changed with the Covid pandemic, as French people eventually adopted them, too.]

5 Absolute, Sure-Fire Ways to Get Rich in France