A Visit to Red Boat Fish Sauce in Vietnam 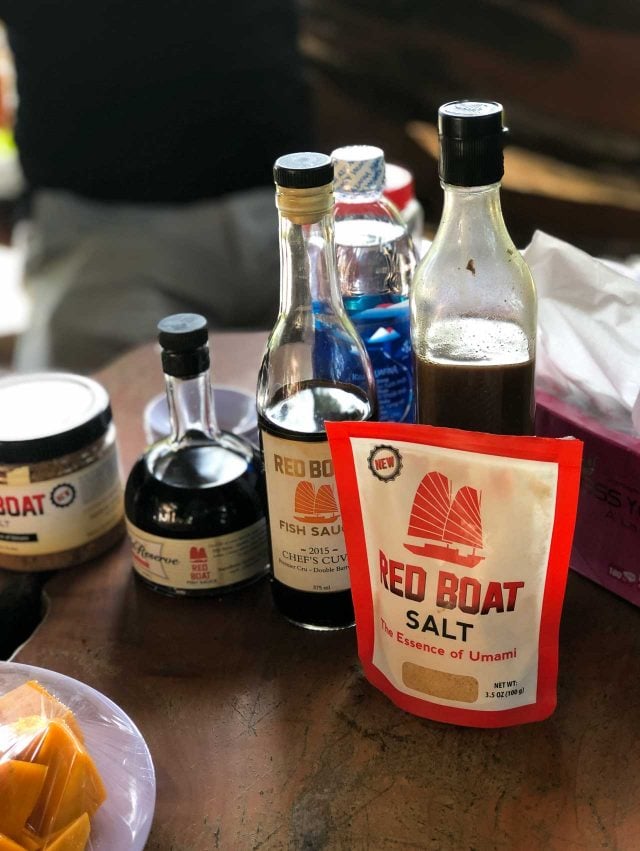 When I realized we were going to Vietnam, I decided not to start making lists of places to go or things to eat, like I often do. (I’m learning to say “Yes” to less-scheduled vacations.) Fortunately, a friend who lives with her family in Ho Chi Minh City planned almost our entire trip for us, and I was happy to relinquish the role to her.

When it included a short hop to the island of Phu Quoc, famous for its fish sauce (as well as its pepper), the only plans I made for our entire vacation were to visit Red Boat fish sauce, one of my all-time favorite condiments. When we got to Phu Quoc, I quickly learned that “fish sauce factory” visits are on the tourist circuit, but they were with other companies and Red Boat is distinctly different than the rest. While their facility isn’t open to the public, I sent a message and learned we were mutual fans. So a date was set, and off we went. 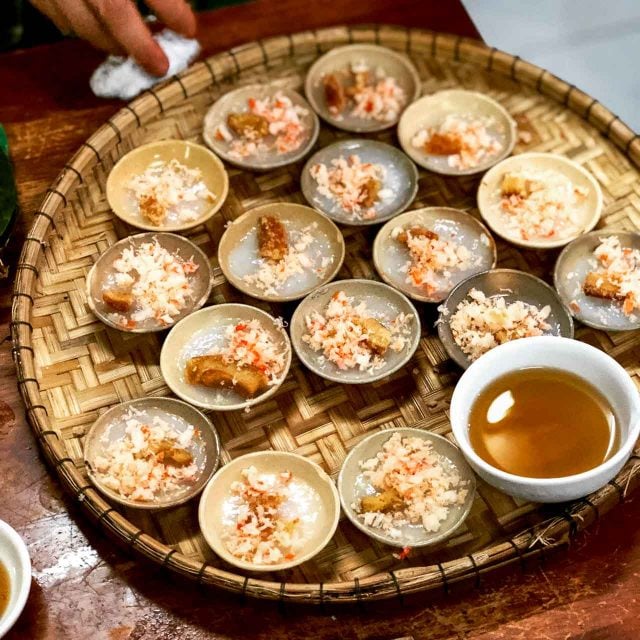 It’s hard to imagine a meal in Vietnam without fish sauce featuring prominently into a dish or a sauce. If you eat street food, you’ll find a bottle on the table, used to season food. The dish, above, called Bánh bèo are little steamed rice cakes with chopped shrimp and crispy fried pork rinds, which we enjoyed in Hué at Hahn, served with a dish of fish sauce alongside. (I was also served an entire half-bottle of vodka, just for myself, which was listed as “local rice wine” on the menu.) Caramelized chicken and Caramel ribs are other dishes that rely on fish sauce, which is naturally rich in glutamates, for their tangy, umami-rich flavor. And rice noodle salads are often doused with fish sauce as well. 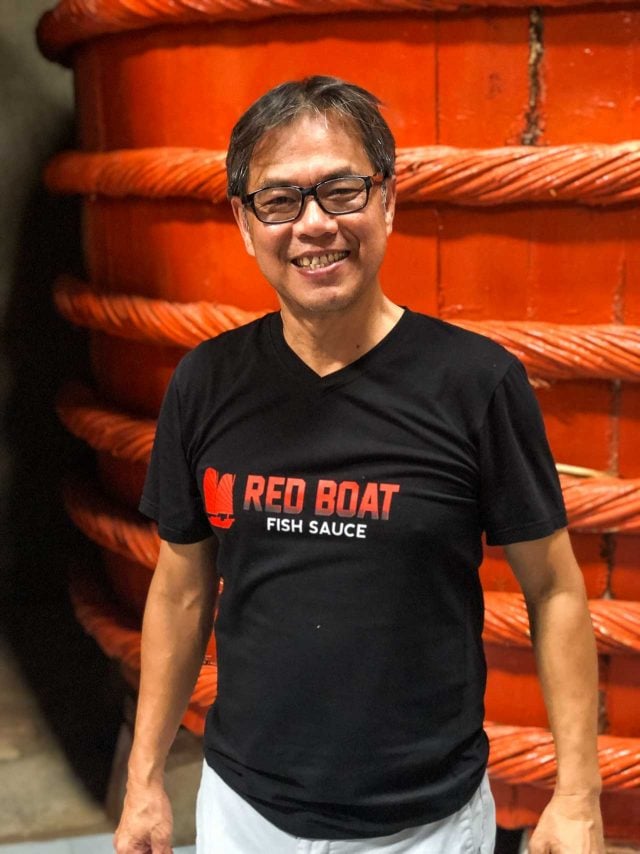 Red Boat fish sauce, I found out, is off-the-beaten-path, and even the people at our hotel, who grew up on the island, had no idea how to get there. I understood why Cuong Pham, the owner (above), said, “Best to have the taxi driver call me. I’ll tell him how to get here.”

I saw what he meant when we pulled into a narrow driveway, that didn’t look like it would lead to much from the street. The streets in Vietnam seem to be a jumble of everything, with different kinds of shops and restaurants, and other kinds of businesses, all mixed together. I was amazed at what kinds of businesses I randomly came across just walking around or passing on our motor scooter.

Adjacent to the Red Boat fermenting barrels is the river where the black anchovies are caught and hauled in by their boats. Other fish sauces might be made with other kinds of fish (such as sardines or squid, but Red Boat only uses wild anchovies. 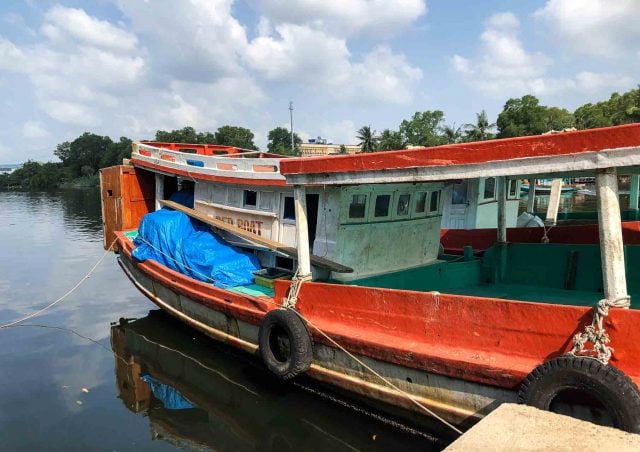 One of the secrets to their fish sauce, which is why it isn’t as “fishy” as other fish sauces, is that the anchovies are salted on the boat, right after they’re caught, so they stay fresh. Other fish sauce makers may salt the fish a few days later, when the fish are not exactly at their prime. And we all know that fresh fish doesn’t get any better the longer it sits.

The salt is also special. It’s harvested not far from their docks, and before it’s used, it’s “matured” for three months before using it, which mellows it, and reduces its harshness. Cuong noted that the three factors that contribute to the good flavor of their particular fish sauce are the quality and freshness of the anchovies, the salt, and the fermenting environment. 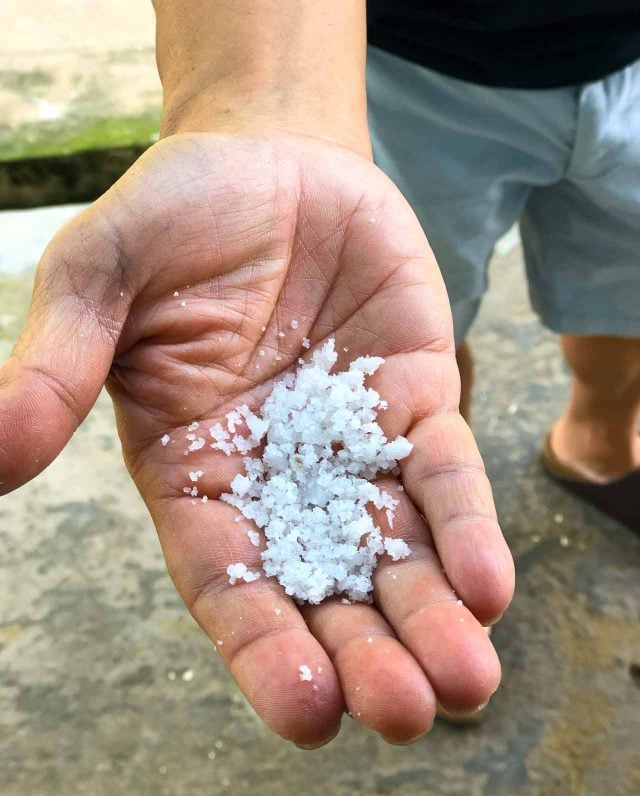 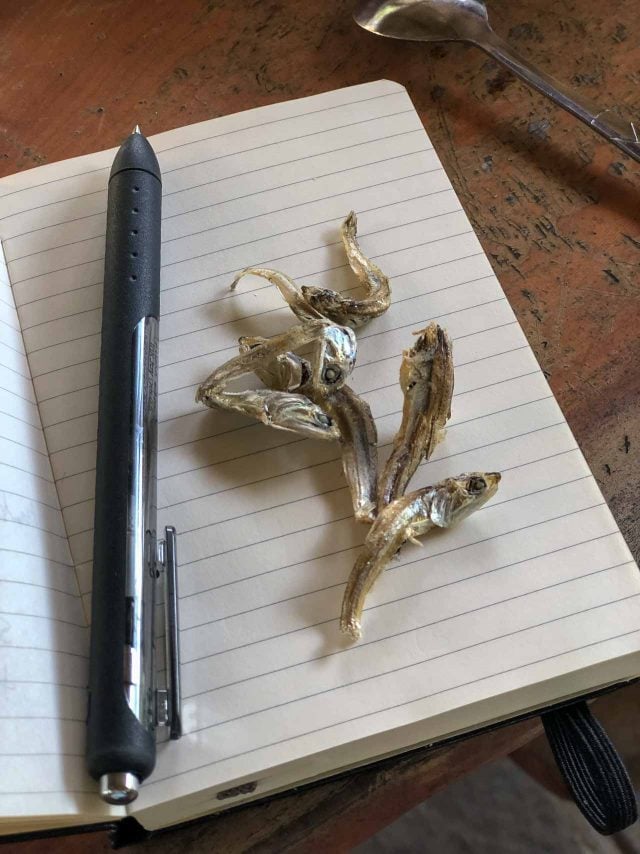 Inside their warehouses, just next to where the four fish boats that drop off the anchovies a couple of times a week were parked, is a large room filled with squat, tangerine-colored barrels. Each barrel holds about 13 to 14 tons of salted anchovies. They use about 32% to 35 % salt and don’t add anything else, such as MSG or sugar. The warehouse has a thin roof and can get very hot in the afternoon sun, which was why our visit was scheduled fairly early in the morning, and that heat is one of the factors that helps their sauce ferment properly. 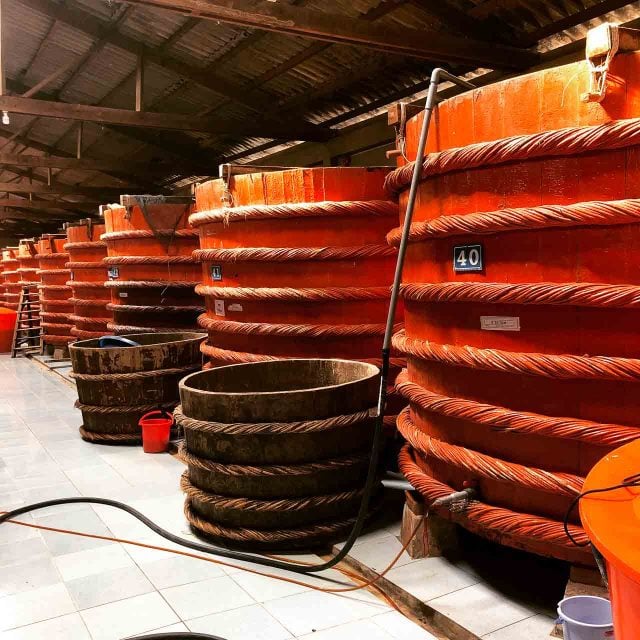 You can see from the jar on the left, below, what the anchovies and salt look like after they’ve been marinating in salt for a short time. 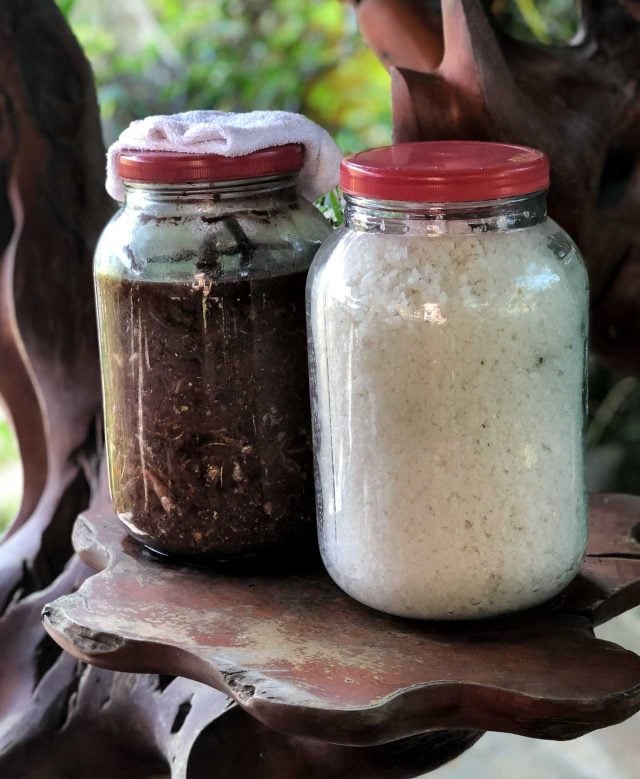 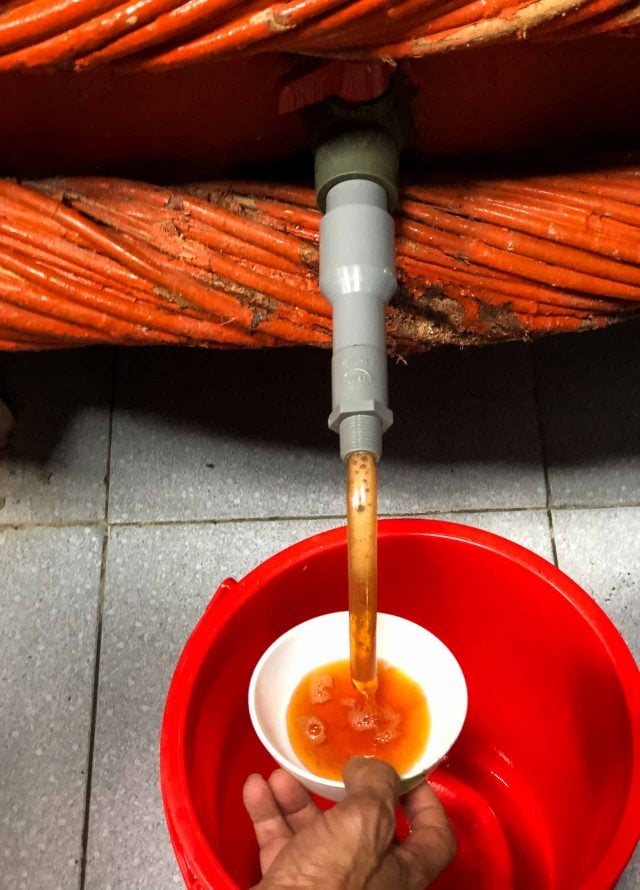 To show us the difference in the sauce over the course of the year it takes to ferment and age, Cuong drained off fish sauce from several different barrels, allowing us to see and taste the difference between sauce aged for 3, 6, 9 months, as well as fish sauce aged for 12 months, when it’s done and bottled. He pointed out the three-month aged sauce was lighter in color and had a rougher taste when we dipped our spoons into it, than the sauces that had been aged longer. Tasting them all, it was remarkable how the longer aging gave the sauce a substantially deeper flavor. 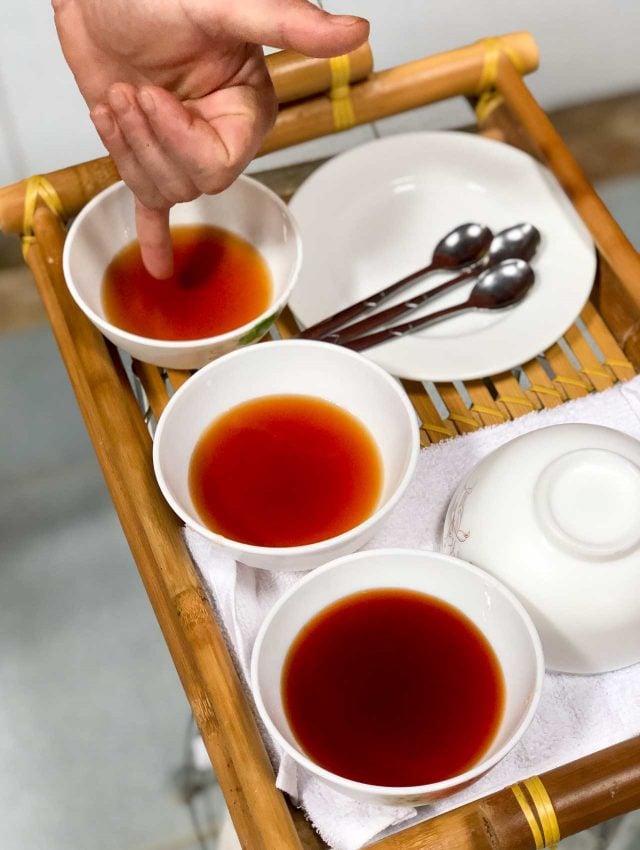 Also as the fish sauce ages, the color gets progressively deeper. Interesting, Cuong had a plate of mango slices alongside the bowls of sauce. In addition to being amazing mangoes – the fruit in Vietnam was pretty phenomenal – mangoes are the perfect palate cleanser for the salty sauce. Who knew? 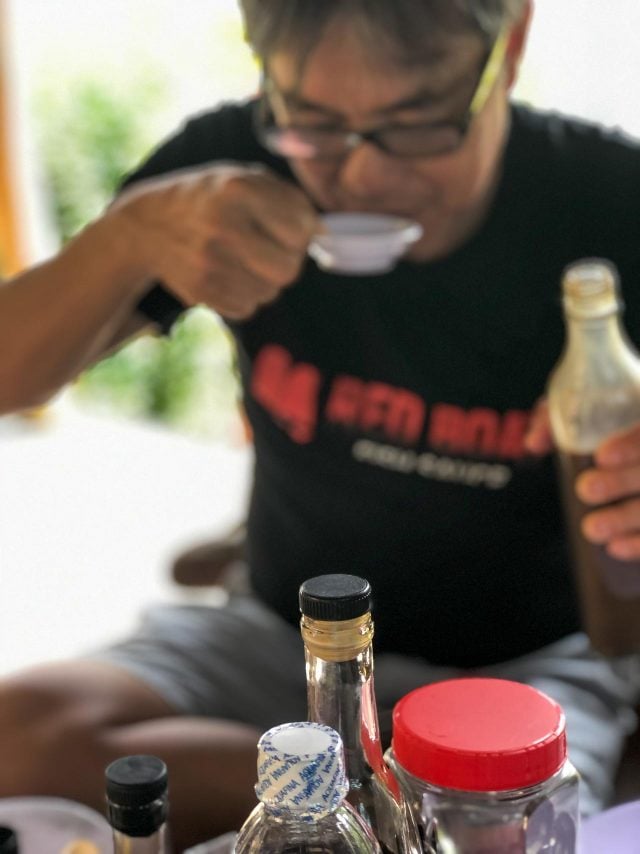 As our tastes change, Cuong told me that in America, fish sauce isn’t necessarily considered an Asian ingredient anymore, as people are using it for lots of other kinds of cooking, including carne asada, pan-roasted brussels sprouts, and even cocktails.

Elsewhere, it’s still a rather uncommon ingredient, and although stores that specialize in Asian ingredients sell standard fish sauce, it’s hard to track down Red Boat in France. (Someone tipped me off to a mail order source, La Maison du Vietnam and it’s also available on Amazon Germany, which ships to many countries in the EU.) The Red Boat website in the UK will also ship. 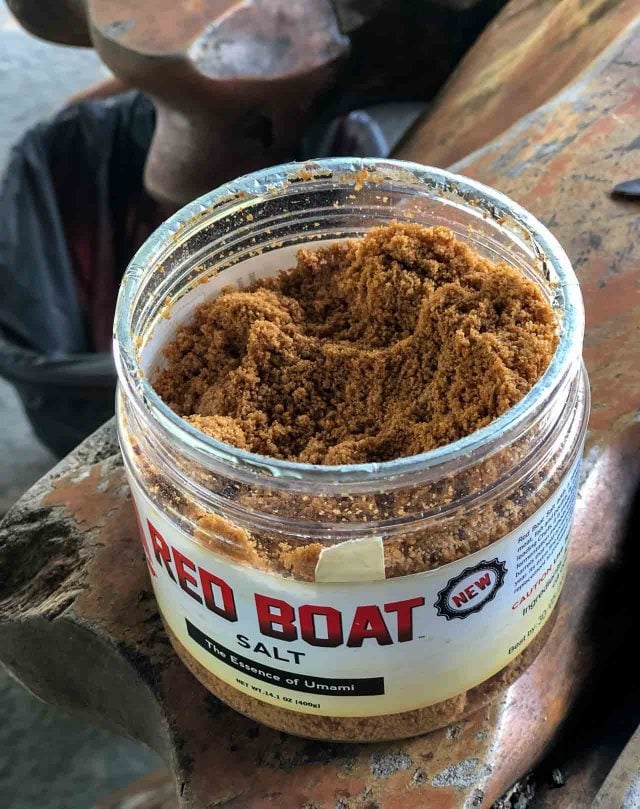 In the United States, it’s sold at Whole Foods, Trader Joe’s and on Amazon. I’ve considered bringing it back with me, but concerned about the pungent bottle opening, and infusing the contents of my suitcase in fish sauce. (I worked in a southeast Asian restaurant back in San Francisco and someone dropped a bottle of fish sauce in the dining room, which heavily scented the room for several days after.) One product that was new to me, that I learned about in Phu Quoc, was Red Boat salt, which is definitely taking a one-way trip back to France with me. Wow, was that good! And definitely more suitcase-friendly.

Cuong told me it was especially delicious rubbed into meat before grilling, and after I posted a picture of the salt on my Instagram page, it got over 5k likes, attesting to the power of umami. My friend Andrea Nguyen posted a recipe for a Super Umami Steak, rubbed with the salt shortly after I put up that picture, that looks delicious and gives a good overview of how the salt can be used. Due to the startling low luggage limits on VietJet, just 7 kilos per person (and $100 if you go over), I didn’t want to risk taking a bag of the salt back with me, but I’m going to hunt some of that down next time I’m in the States.

Finally, we tasted Red Boat Phamily Reserve fish sauce, which was outstanding and worth the extra price. (It’s available on their website and Amazon.) The fish sauce is aged in bourbon and maple barrels, then finished with a light smoking. While the salt was intriguing, this family-reserve fish sauce was extra special, truly the best for last.

[Note: I got a lot of inquiries where to get Red Boat fish sauce, salt, and other products, when I posted about them on social media so I’ve included links to various places where you can find it in the post. Due to the nature of the product, it’s availability can vary. While Red Boat has distributors in several countries, it can be a challenge to track down outside the United States, but they are in the midst of building their European distribution. I’ve given some links in the post, and you can also use my tips for Finding Foods and Other Items Online.] 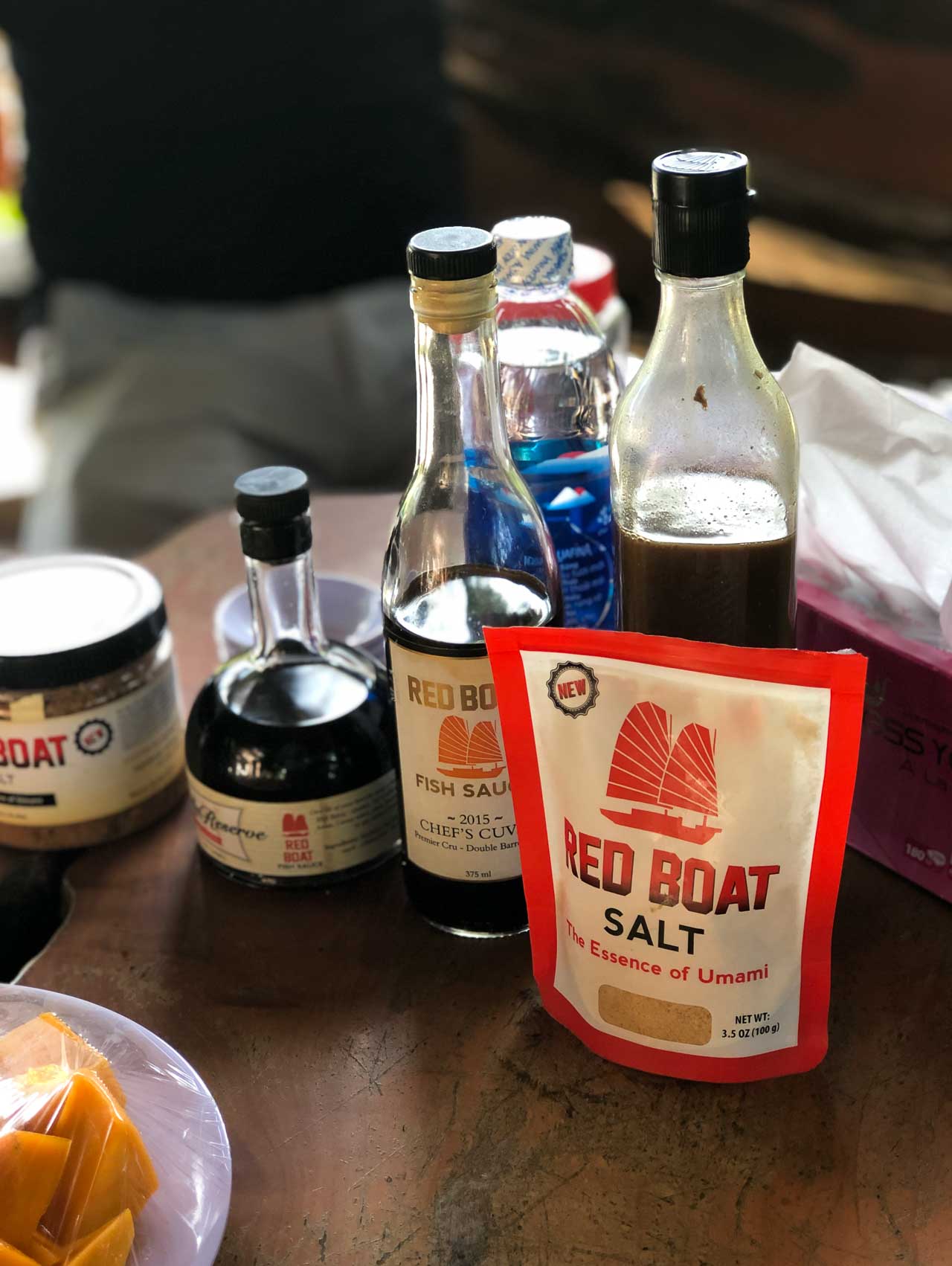