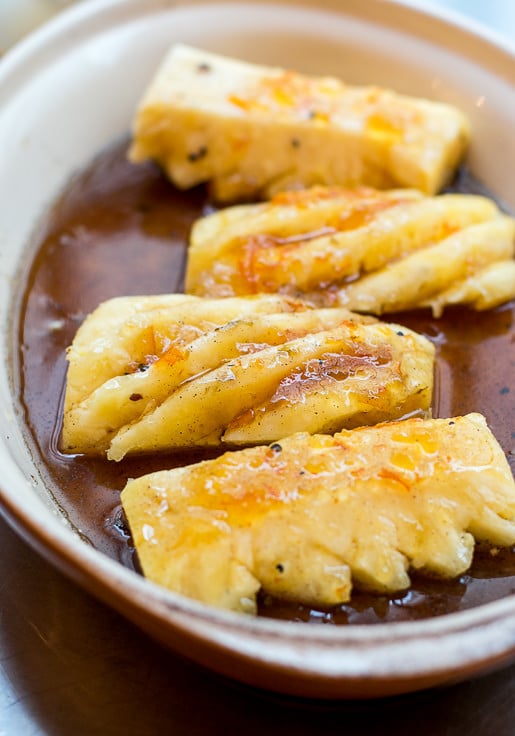 One fruit that’s always in season is pineapple, and the spiky beauties really help to brighten up winter, especially when you’ve had your fill of apples and pears. I like eating fresh pineapple after a meal because not only is it refreshing, but it has a pleasant acidity that tends to make me feel good about eating it. Although not local (we wish! because that would mean a tropical beach nearby…), pineapples are always available at the markets in Paris. You can get regular pineapples, sometimes called “Red Spanish” or “Cayenne” pineapples in the world of pineapples (although I think that second variety might give spice-averse locals pause), and there are also slender, smaller Victoria pineapples, that are much sweeter, although yield less edible flesh. (In the United States, there are Tahitian pineapples, which have similar characteristics.

I was reading Baking Chez Moi, Dorie Greenspan’s comprehensive, and deliciously readable book, about French home baking, and she notes that Parisians don’t bake the way Americans do. Americans bake to relax or as a hobby – in France, it’s something you do because, well…you need a dessert. They don’t make a big fuss about it or are all that concerned about appearances. I think people know they can’t compete with the professional pastry shop on the corner, so they’re just content to make what they feel will be fine for their guests. And in my experience, French people are always appreciative of homemade desserts, since so many people do go to the corner pâtisserie. 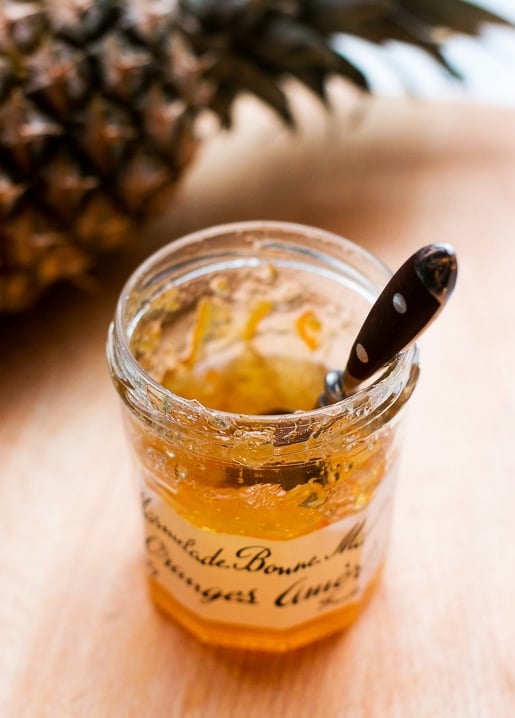 No one expects to go to a dinner party and find a spectacular cake for dessert, unless it was picked up at the local pastry shop. And there’s certainly no shame in that. People often ask me about how Parisians make macarons or baguettes or croissants, and I answer that no one makes those in Paris since you can buy them, good-quality ones, almost anywhere. Like charcuterie, they leave it up to the experts. French home bakers also tend to rely on reliable, tried-and-true desserts, always having a few in their repertoire, often passed down from their mothers – or in the case of chocolate mousse, the most famous recipe in France is on the back of the Nestlé chocolate baking bar package, sold in le supermarché. 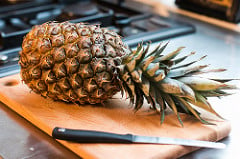 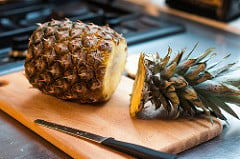 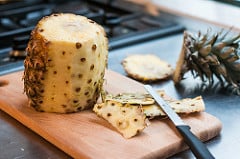 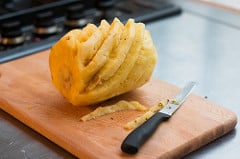 I was once on a panel and suggested beforehand that we take questions from people in the audience. “Oh, no. No one will raise their hand,” I was told by a French woman sitting next to me, “It reminds them of grade school when if they were called on and got the answer wrong, they’re be reprimanded in front of everybody else.”

Since no one wants to be reprimanded for a dud dessert (and I’m beginning to think that the best way to get reprimanded is to say, or put something, in a social media stream…), Dorie’s book of well-tested recipes presents a range of desserts and sweets that people do make at home; think casual cakes, cookies, and other sweets, many that can be made in compact Parisian kitchens.

This is one of those desserts where you really don’t need to do anything, and is nice because it can be made in advance. Harried Parisians are habitually late for dinner, so with this caramelized pineapple, it can be made in advance and you don’t have to worry about something temperamental roasting away in the oven while you cool your heels, waiting for them to arrive. Believe me, I’ve been there. We recently invited some friends for dinner and they arrived an astonishing 2 1/2 hours late. 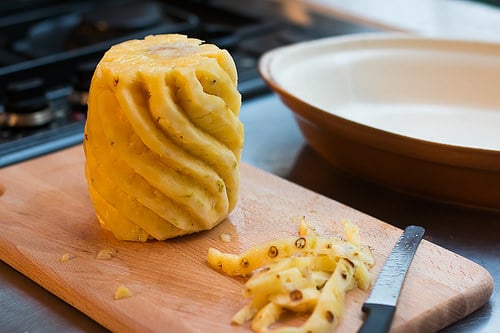 Dorie got the recipe from someone who works in her hair salon in Paris. In her book, she wrote about trying to get quantities out of him – he used finger measurements “that wavered” she says, to denote how much juice to use. And how he didn’t have a clue as to how much jelly was in his recipe. He just winged it. Perhaps, he said, it was a jarful?

So I chuckle when people ask me “What do you mean by a handful?” or “How much is a pinch?” Because French people rarely slavishly follow recipes. They just cook au pif, or “by the nose.” (Or in this case, by the jar.) And this recipe is a good example of that philosophy. You can vary the type of jam or the liquor – although I found it a touch sweet, so recommend using a tart jam, and I added a squeeze of fresh lime juice to balance out the flavors. 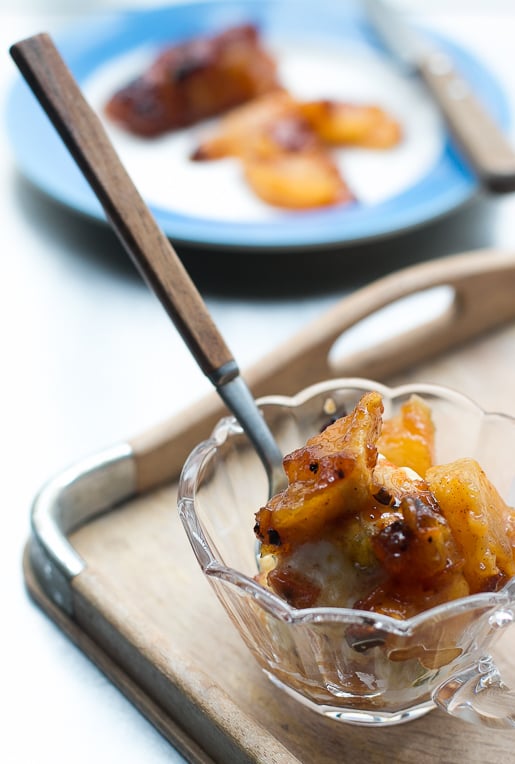 When choosing a pineapple, disregard the advice about if you can easily pluck a leaf from the center of the top, that will determine ripeness. A fresh pineapple will be ripe when it’s not too green on the outside; you want to find one that’s mostly yellow. Pineapples don’t ripen much once picked, so use your nose – au pif – to take a sniff. If it smells sweet, with the heady fragrance of the tropics, you’ve got a good one in your hands.

Adapted from Baking Chez Moi: Recipes from My Paris Home to Yours Anywhere, by Dorie Greenspan You could serve the pineapple quarters whole, although I diced the pineapple up and served the caramelized tidbits and some of the thick, caramelized sauce, with toasted coconut ice cream. (From The Perfect Scoop.) Vanilla ice cream would work as well. Leftovers got chopped up and added to a fruit salad. Note that even with the lime juice, it’s somewhat sweet. So do try to pair it with something that will offset that. You can always add a bit more lime juice when the pineapple is done cooking, to balance it out. Dorie recommends apple jelly, apricot jam, or orange marmalade. I would go for the most tart of the bunch – apricot or bitter orange. But the fellow who gave her the recipe suggested that hot pepper jelly would work, which I’m going to try next time. In any event, since the liquid is going to be heavily reduced, it’s not really necessary to use your fancy, homemade jam. I used store-bought, and it worked fine. For those avoiding alcohol, simply use 1/2 cup (125ml) more orange juice with an additional generous squeeze of lime.
1 ripe pineapple, peeled, quartered, and cored
1/2 cup (125ml) fresh orange juice
juice of one lime
1/2 cup (125ml) liquor; rum, Cognac, brandy, whiskey, or bourbon
1 cup (250g, 8 ounces) apricot jam or bitter orange marmalade
optional: 1 teaspoon powdered vanilla bean or 1 vanilla bean, split lengthwise
6 allspice berries slightly crushed (or another spice, such as a couple of cinnamon sticks, crushed cardamom seeds, or a few star anise)
1. Preheat the oven to 300ºF (150ºC).
2. Place the pineapple in a baking dish that’s not much large than they are, but with room for basting and turning the pineapple as it cooks.
3. In a bowl, mix together the orange juice, lime juice, liquor, jam, vanilla (if using), and allspice (or whatever spices you are using.)
4. Pour the mixture over the pineapple and roast in the oven for 1 1/2 to 2 hours, turning the pineapple quarters every 20 minutes, basting them with the juices, until the fruit is caramelized on the outside. Depending on the ripeness and juiciness of the pineapple, the cooking time may vary. So be sure to check it, and follow your senses when it’s done – au pif.

Serving: Serve the pineapple warm or at room temperature. It can be served with vanilla ice cream or another favorite flavor, mixed into a fruit salad, or in other creative ways.

Storage: The caramelized pineapple can be stored in the refrigerator for up to 5 days. It can be rewarmed before serving in the oven, covered to preserve the juiciness, if desired.