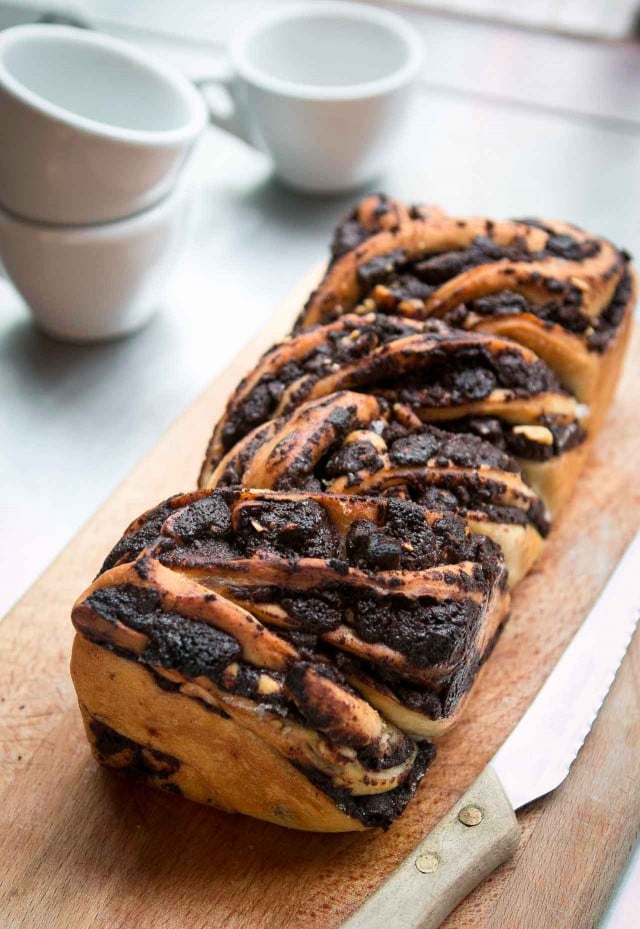 I’d been anxious to eat at Honey & Co. in London, which was at the top of my list of places to try there, but never made it. One of the underrepresented foods in Paris is Middle Eastern food. With a large population from that part of the world, most of the restaurants are snack bar-like stands. And even at the standard Middle Eastern restaurants, I suspect they get their hummus, baba ganoush and other dips, from elsewhere. The knees on my pants are all worn down from begging people like Yotam Ottolenghi and Sami Tamimi of Ottolenghi and Sarit Packer and Itamar Srulovich, the owners of Honey & Co., to open a branch in Paris. But so far, they’re staying on the other side of the Channel. 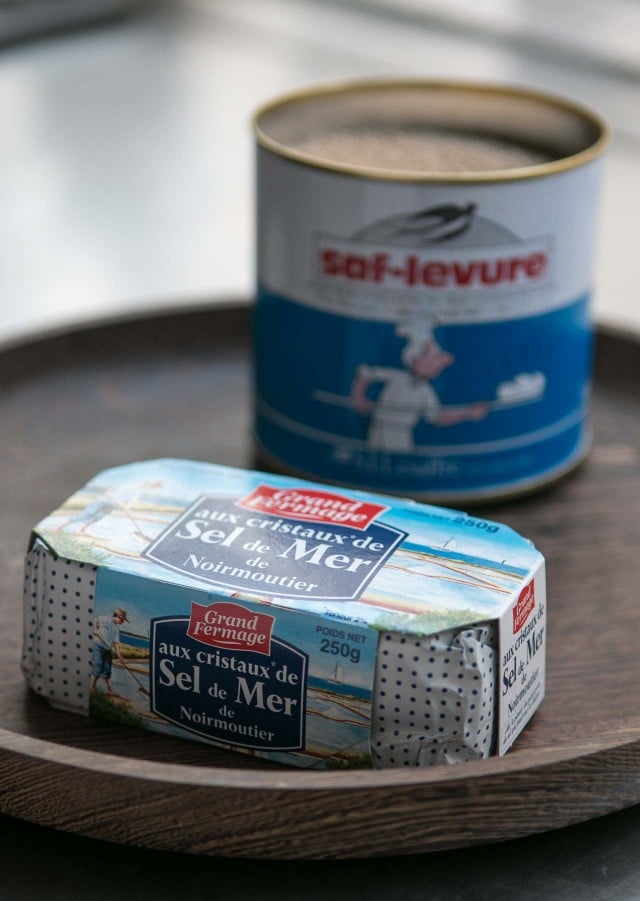 My last trip to London was only twenty-four hours (too many places…not enough time!) and as much as I tried to get to Honey & Co., and a few other places, it didn’t happen. And before I knew it, I was back on the Eurostar train, heading home. But proof that if you wish for something hard enough, when I was in Ireland at Ballymaloe, spending time in the kitchen early one morning with the head baker, in walked Sarit and Itamar, who started to prepare a generous lunch of all the Middle Eastern foods that I love. And a few hours later, I was sitting around an amazing table loaded with gorgeous salads, spreads, and long-roasted lamb, prepared by the talented team themselves! 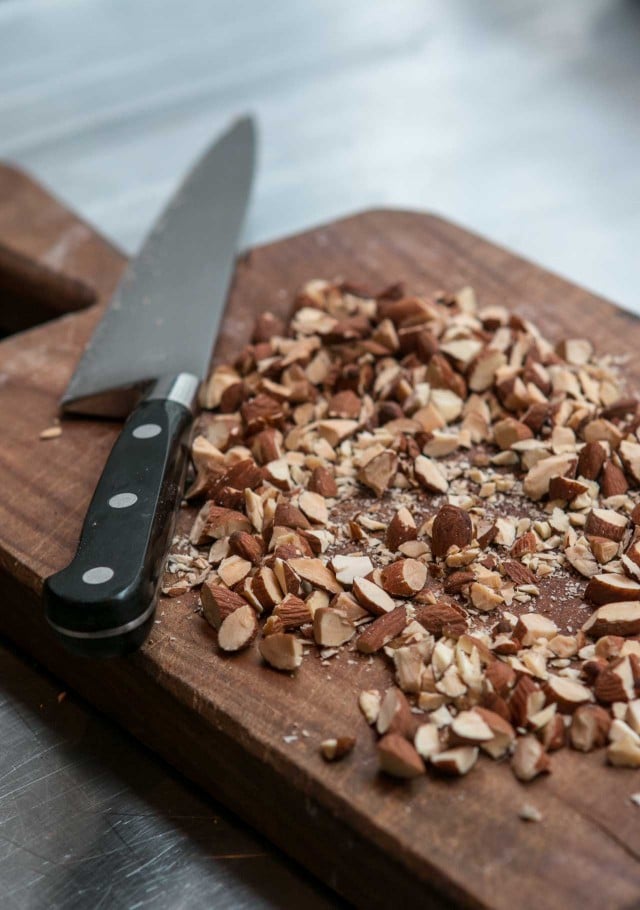 And proof that double-dreams do come true, Sarit and Itamar recently came to Paris and we had a lovely lunch together. They’re had a little difficulty adjusting to all the rich foods, but were troopers. And when we parted, again, they handed me a copy of Honey & Co. The Baking Book, which I was planning on picking up the next time I was in the U.S. or England, along with a bag of their chocolate and pistachio cookies (page 202) that were loaded with beautiful, bright green pistachio nuts.

The book was named the Food Book of the Year by the Sunday Times and it’s easy to see why: If I had more time on my hands, and I hadn’t been laid up for three months with a bum knee that eventually needed surgery, sitting around eating chocolate on my couch, I’d be able to eat everything in the book. 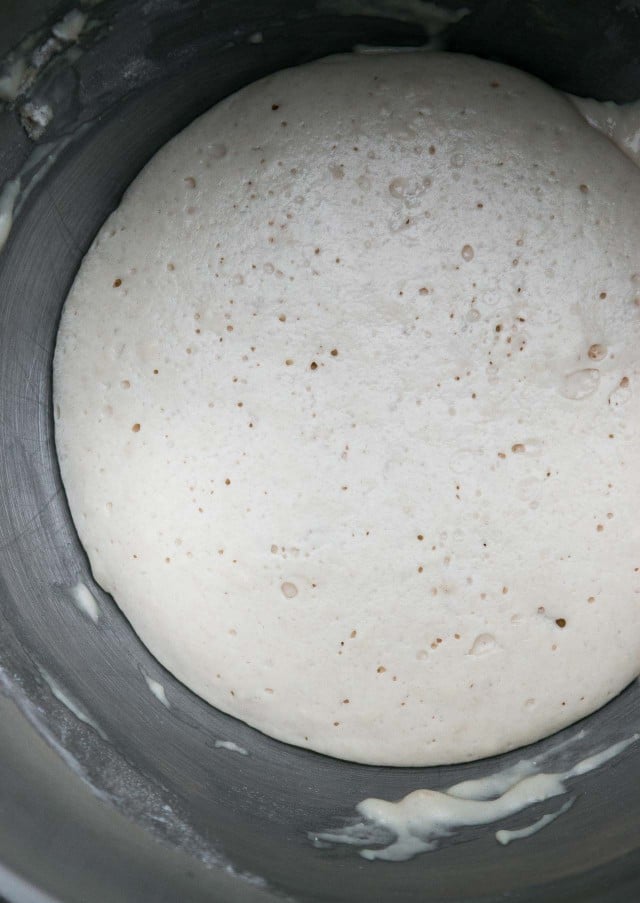 Still, man cannot live by peanut M&M’s alone, and one must have babka. I’ve been working on babka for a while. The loaves you get in bakeries tend to be dry, sad affairs, with a few chocolates dusty bits here and there. When I saw the picture in the Honey & Co. Baking Book, I had to try it. 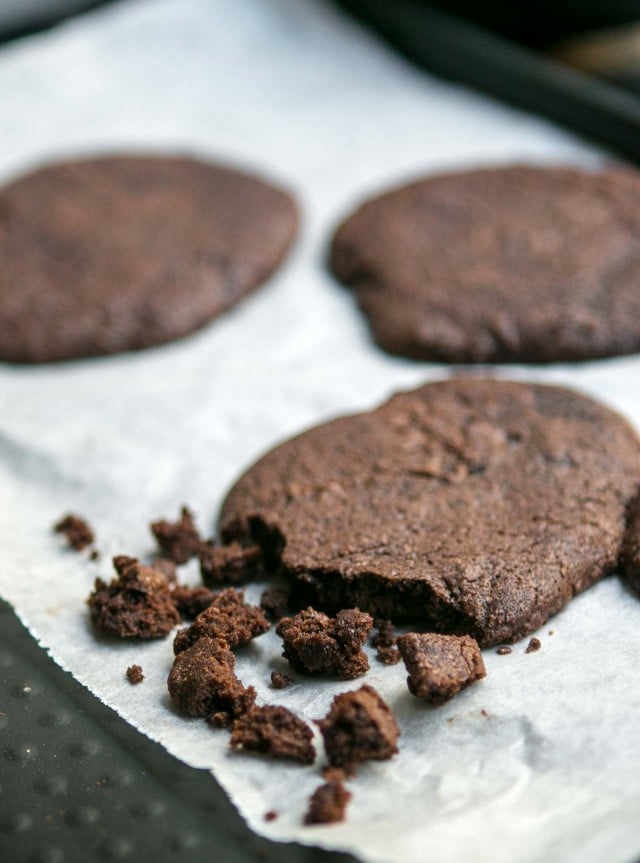 However when I was in Tel Aviv, I had the most delicious rugelach of my life and the baker told me his secret was brownie crumbs. Although I never was able to get the recipe from him, which he promised me, I had the idea stuck in my craw and decided to use them here. And for those who don’t eat nuts, you can leave them out and just add the brownie or cookie bits.

In another bit of serendipity, I had some chocolate wafer cookie dough that I’d made, but I goofed adding the flour, so into the freezer the dough went. Usually things that go into my freezer disappear farther and farther to the back, until I find them years later. But this dough was right on top. So I made makeshift “cookies” out of it, baked them so they were still soft inside, and crumbled those up to use. 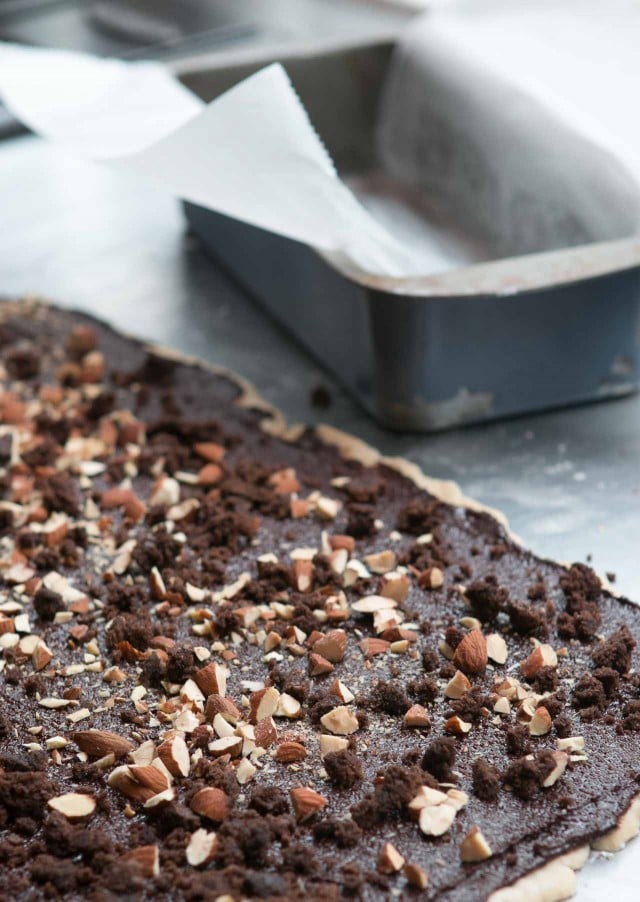 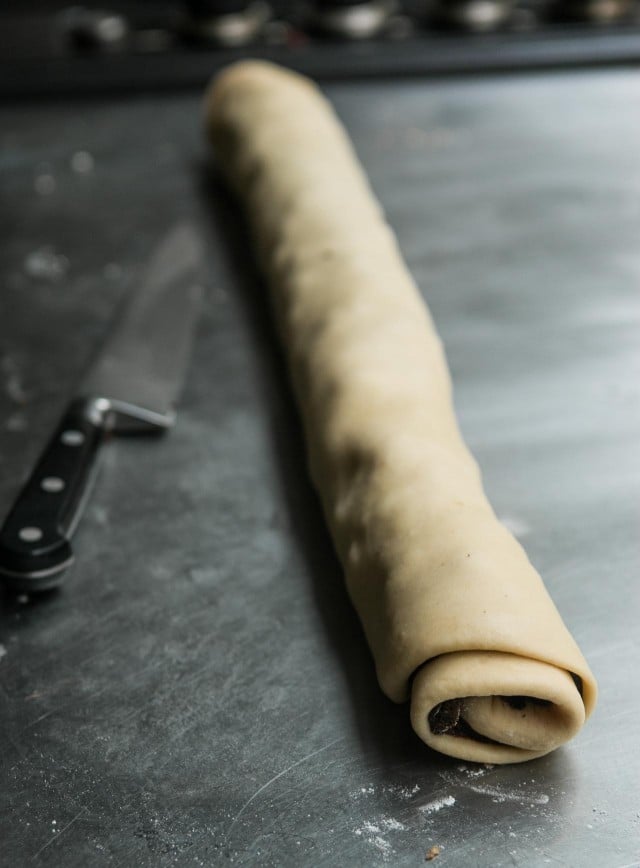 Another change I made was some adjustment with the flour. I wrote to Itamar to inquire further and he thought the flour in France might be too strong compared to what they are used to. (Interesting, supermarket flour in France is very soft, and low in protein, which American bakers find out the hard way when they go to bake their first batch of chocolate chip cookies in France and open the oven door midway through the find the dough had spread and flowed, lava-like, all over the baking sheet.)

The first babka I made tasted incredible. I could not keep myself from snatching bits and pieces of it. It was nothing like the babkas I had at Jewish bakeries when I was a kid. Rich dark chocolate and crisp nuts were embedded in a twisted loaf that offered a variety of compelling textures with every mouthful that I lopped off. Soon I found myself forgetting about those peanut M&M’s, and thinking more and more about babka. 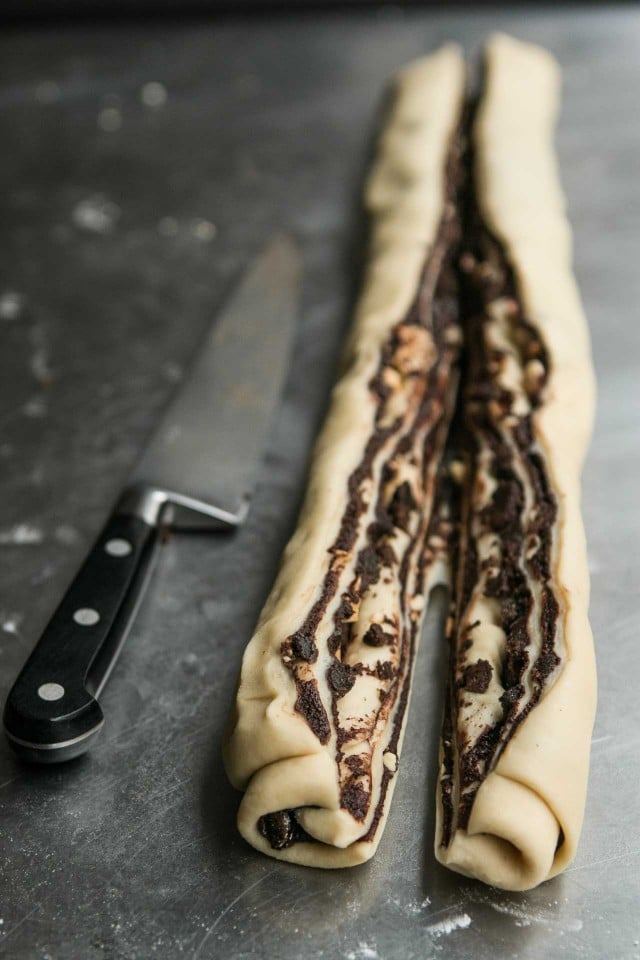 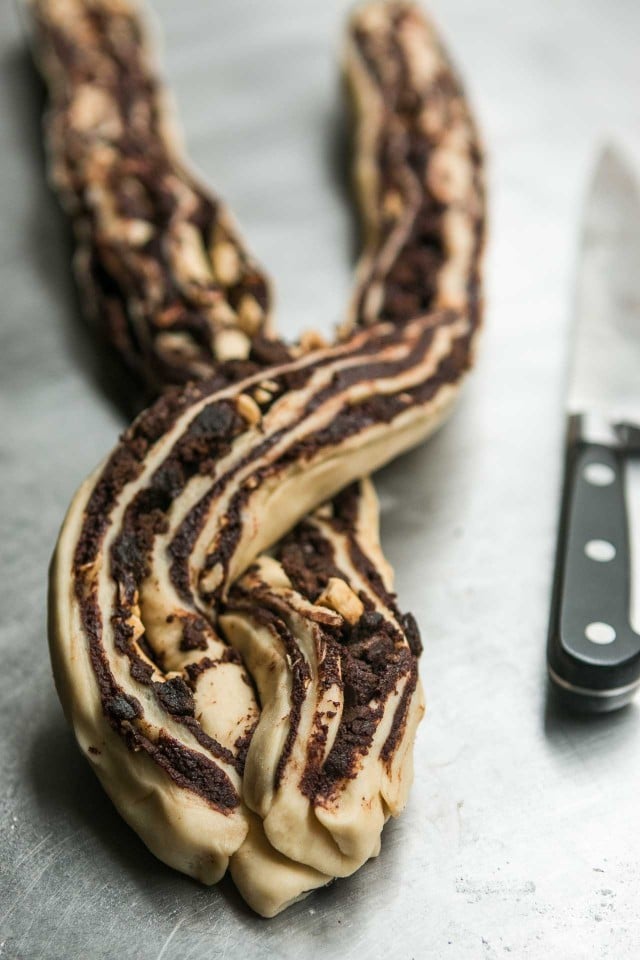 But I still wanted to get the dough right as mine seemed awfully stiff. Their instructions say the dough will be quite soft so best to refrigerate it, to make it easier to work with. 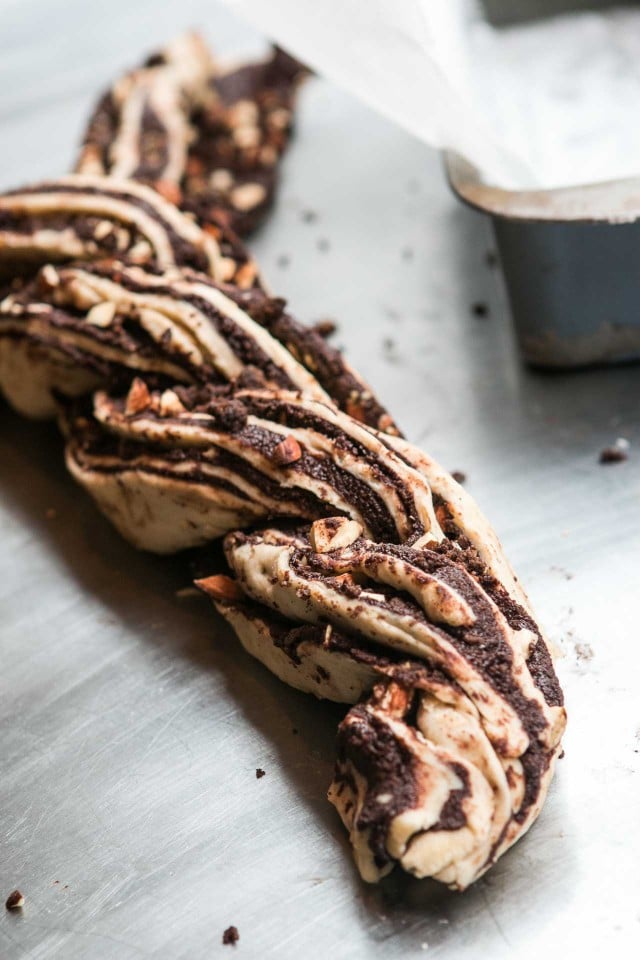 Because I’m such a nice person and wanted to share a recipe that I loved so much, I ended up dipping into my coveted stash of American flour to test this out again, and it came out beautifully, although I made a few modifications noted in the recipe. One thing that people often forget is that recipes can vary based on ingredients. A high-percentage chocolate might be dry due to less cocoa butter, and more cacao beans, or your water may be wetter than the water in France. You just never know. 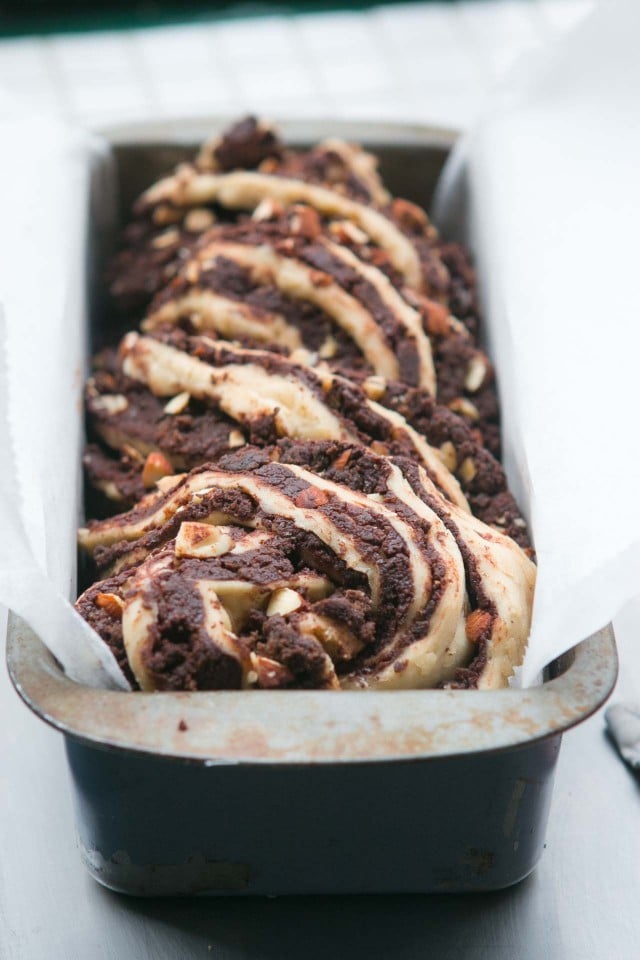 The icing on the cake is the syrup on the babka. It takes this cake/bread (also known as a kranz) to a whole other level of moist goodness. So no matter how wet your water is, the syrup will assure that everything gets a nice soaking from the honey-spiked syrup.

I am anxious to get back to London, now that my knee got fixed and I am no longer confined to my sofa, so I can have a meal at Honey & Co., until I can convince them to open closer to me. In the meantime, I’m eyeing those chocolate and pistachio cookies, and a few other goodies from their baking book.

Adapted from Honey & Co. Baking Book by Sarit Packer and Itamar Srulovich I used leftover cookie bits in the babka which dialed up the chocolate flavor beautifully, but you can omit them. (The recipe is the Chocolate Wafer Cookies in Ready for Dessert.) Or if you are on a nut-free diet, you can omit the nuts and just use the cookie (or brownie) bits. This can, of course, be made by hand without a stand mixer. Simply mix the ingredients for the dough in a mixer bowl, then turn the dough out onto a lightly floured countertop and knead until smooth. One interesting variation I saw was using spelt flour in this adaptation of the same recipe: Cinnamon and Walnut Babka. The original recipe said to chill the dough after the initial mixing, after step 3, for at least 6 hours, or overnight. I made it several ways – including once rolling it out right away, and it worked fine without the overnight in the refrigerator. But usually doughs like this improve if left to rest overnight, so if you can wait that long, I’d do that.