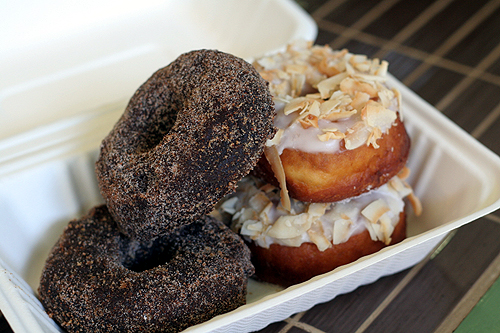 Actually there’s nothing new about donuts, and places like Krispy Kreme have come, and (almost) gone. But tucked away in a sunny corner of 24th Street in the Mission is the Dynamo Donut & Coffee shop. 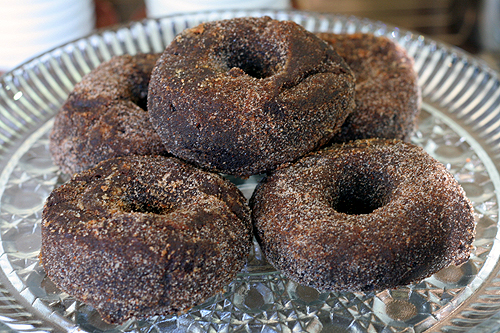 It’s not really a shop, but a stand, a counter on the street with a nice shiny espresso machine and a few covered cake stands of donuts, whose flavors change on a daily basis.

Each day, three of four varieties of donuts are whipped up, and when I was there, Spiced Chocolate, Coconut, and Vanilla Glaze. Of course, we got one of each.

Gulp! The camera doesn’t lie—we got two of each. 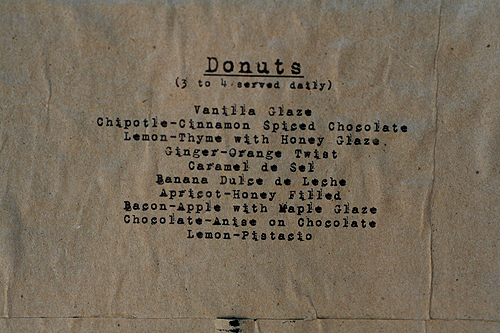 We missed Caramel-Sel and Lemon Pistachio, and Bacon-Apple with Maple Glaze (omg! It’s making me crazy just typing those words), but I love anything with coconut and the coconut-topped donut was tender and cakey, with big, crusty shards of coconut embedded into the top. But the big winner was the Spiced Chocolate. Each soft, brown, sugar-crusted circle was bursting with dark chocolate flavor, with the heat of chipotle chiles giving it a nice afterburn. We agreed that that was our favorite. 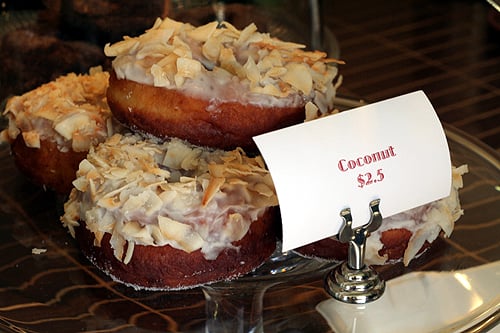 The only downside was that I left them unattended on my friend’s kitchen counter, went out to do some errands, and when I came home, there was just a few crumbs of one of the Coconut donuts left. I have a 7:20am flight to New York tomorrow and was hoping they’d be open early for a quick, last-minute coffee ‘n donut grab, but I don’t think that’s gonna happen. But I know where I’m heading first next time I come back. And I’ll be sure to hide them well, or eat them quickly.