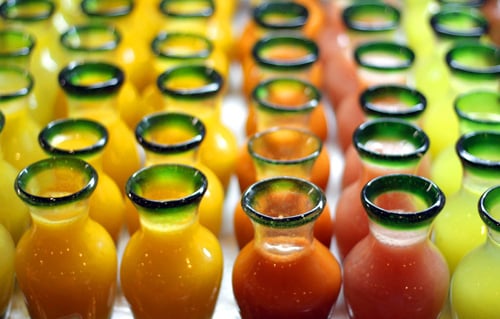 I’m beginning to think we should have our next Food Blogger Camp in some dark, gray place (like my apartment in the middle of the winter, back in Paris) instead of alongside a gorgeous sunny beach in Mexico. Because as much as we were all having fun learning about food styling and photography, and talking about the nature and intricacies of blogging, there’s also a considerable amount of time we are obliged to spend poolside or on the beach, taking a break from the arduous studying everyone is deeply engaged in. 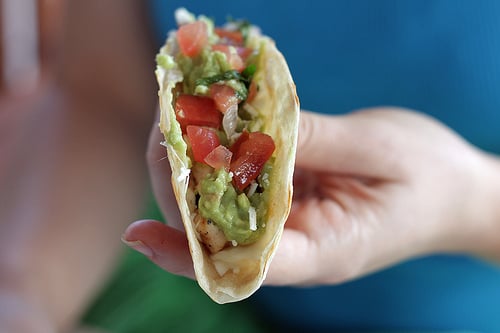 Okay, that’s not really true. We’re finding a good balance between playing and learning some photos tips, practicing with Mexican fruits, breads, and Kerrygold butter, which was especially good for me because I think there must be a few hundred posts on my site alone that feature butter.

I’ve done everything from whipping it up for a batch of cookies to melting it down for a cake batter. It’s so beautiful on its own, sometimes it’s best just to lay the block down and grab a snap. Then head out to the beach, and take a nap. 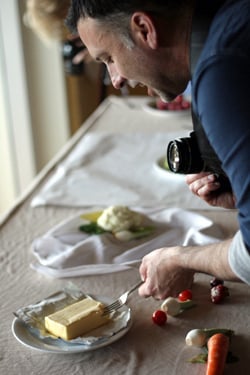 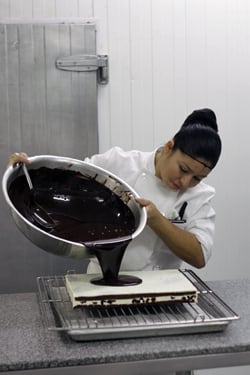 Another reason to go indoors is the spectacular Mexican food. Last night I had dinners and we just gorged ourselves on everything from corn fungus quesadillas to panuchos (a specialty of the Yucatán) covered with the spiciest Scotch Bonnet salsa imaginable.

I am convinced that hot sauces are like drugs; it’s so easy just to keep spooning them over everything, even though you know the payment next day will be cruel and painful. And when there’s fresh lime margaritas to ease their entry, the next morning can be a little rough for la cabeza as well. 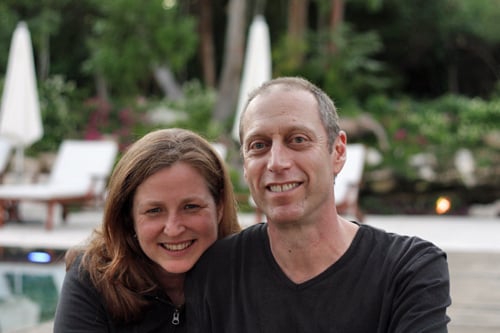 What makes Food Blogger Camp so rewarding is meeting everyone from around the world, making new friends and seeing ones I don’t get together with nearly enough. I was joined by the lovely Elise Bauer, as well as my guy-pal Matt Armendariz and his partner, food stylist Adam Pearson. Jaden Hair was along, too, although she did her best to finagle some “special attention” from the staff. And Todd and Diane made sure we ate well at every meal and kept our lenses pointed at the food, rather than some of the other goodies roaming the beach. 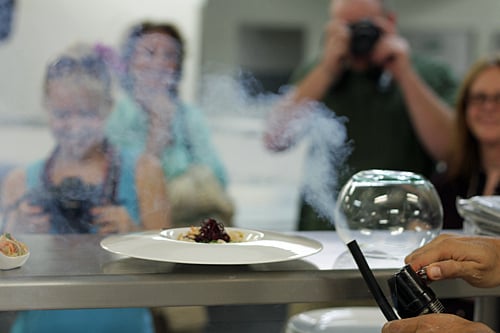 Our “classrooms” were everywhere, from kitchens where chefs demonstrated molecular gastronomy for participants to practice their photo skills with a real, live chef (using a real smoking gun), to understanding how their cameras worked. 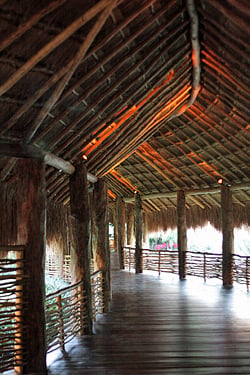 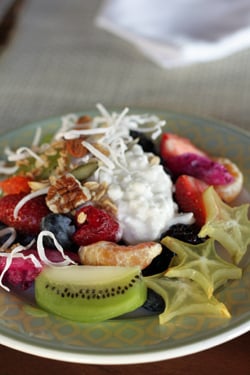 I spoke to the bloggers about how to have fun blogging and finding their niche. The group was composed of folks who have been blogging for a while, as well as a few newbies. So it gave everyone a chance not just to meet up in person, but to trade tips on layouts, usability, writing compelling content, whipping up recipes, and even learning how to deal with those peskie typos. 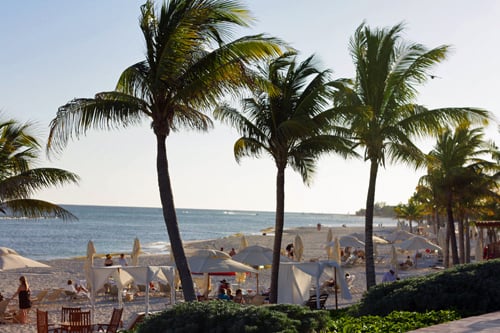 I was joking that I could never live in Mexico, because all I would do is eat all day long. And when I got my first taste of the Mexican food at the hotel, all I could say was “¡Ay Caramba!” 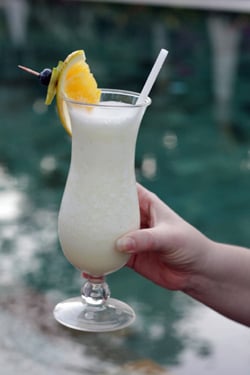 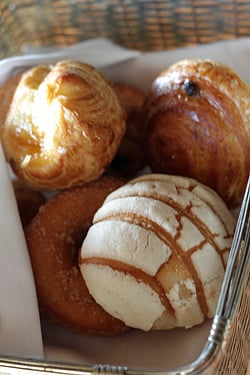 You can keep your American or continental breakfasts composed of a measily croissant or a stack of flapjacks; the best eye-opener is a plate heaped up with spicy chilaquiles. 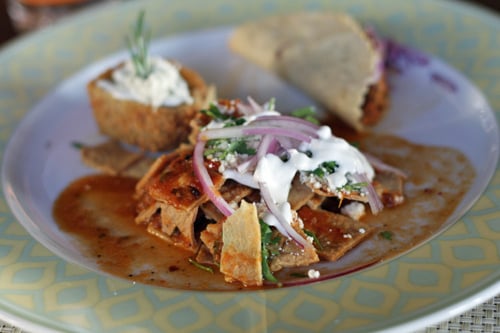 Crispy squares of corn tortillas, a drizzle of cooling crema, and red chile sauce made me (almost) leap of bed in the morning and wait patiently until the magic hour of seven o’clock when the restaurant opened, where I’d be patiently waiting at the door, ready to load my plate up on huevos, chiles, and tortillas. 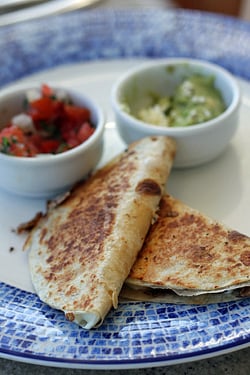 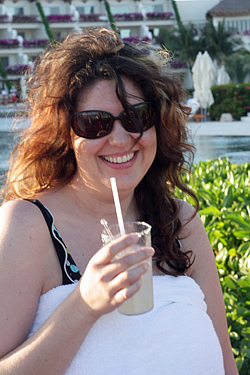 Plus I feel like I needed to rejuvenate my slowly-reawakening digestive system after the bleakness of winter back home with platters of sparkling fresh fruits like prickly pears, carambola, juicy berries, and kiwifuit. But we still have a few more days to go: Nicole and I have a date at the swim up bar this afternoon to discuss the finer points of drinking in-pool margaritas, and I think Marla is going to kick my backside to prove that hers is better than mine. So if you don’t hear from me for a couple of days, aside from being permanent planting myself in one of the Mexican restaurants here at the resort, you’ll know why.

But proof that wherever you go, there you are (or however you say that in Spanish), the chef here at the resort is French. He left his homeland a few decades ago for the sunny climes of Mexico and although I haven’t submitted by resumé for a pastry chef position—preferably one that doesn’t involve firing a gun—I’m heading into their kitchens next week to learn from the masters of Mexican cuisine. Hopefully I’ll come out with a few sweet recipes to share. 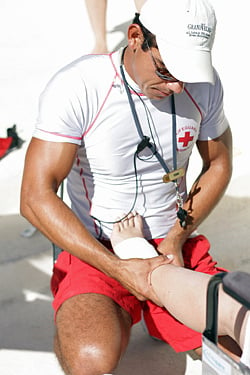 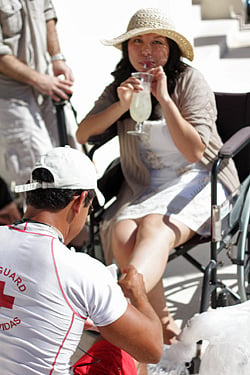 And speaking of sharing, Jaden took a tumble while racing (as usual) toward lunch. While I’m sure the blinding Mexican sun had something to do with it, she was blinded otherwise when the lifeguard came to her rescue. Because we’re not close to a hospital, she had to grab the closest medication at hand. 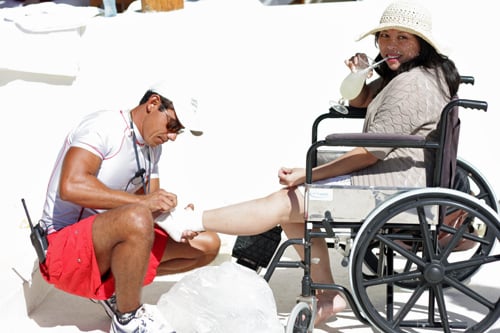 After a soothing foot massage involving some sort of crema to reduce any swelling, we’re hoping Jaden will be back on her feet shortly. If not, she’ll miss this afternoon’s session at the swim-up pool bar. But since the pool bar isn’t ideally reached via wheelchair, I’m predicting a speedy recovery.

The Greatest Job in the World (Confections of a Foodie Bride)

If You’re Happy and You Know it, Eat Foie Gras (FRANtastic Food)

Life Lessons from Food Blogger Camp (Together in Food)

Community Across the Globe: Food Blog Camp 2011 (The Urban Baker)