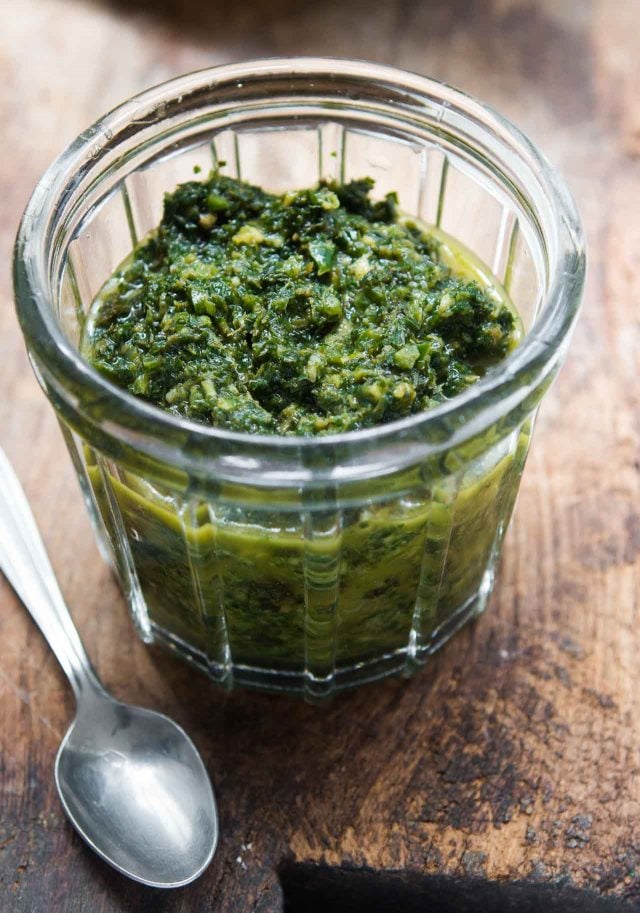 During the lockdown, I found myself with all sorts of things that needed to get used up sooner than I expected. I would buy too many lemons, thinking I’d need them. Then realize I had too many and make lemon curd. The grocery shopping delivery service that I use inexplicably had jalapeño peppers on their website (and a few times, padrón peppers!) and I couldn’t not buy those, since those are very rare around here. And because I’ve been doing Instagram Live apéro hour videos, I was concerned about running out of fresh mint, so bought them by the bundles (plural), until one day I realized I had way too much. 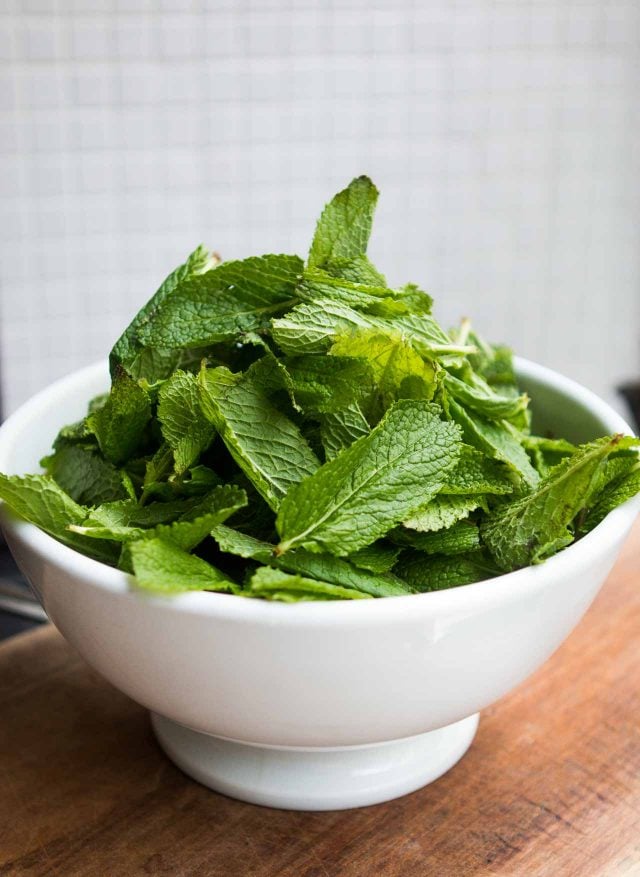 I wasn’t quite sure what to do with it all. I didn’t want to dry it, because it loses so much of what makes fresh mint so special, and saw some recipes for Indian chutneys that looked interesting, and considered making salsa verde. But then I realized that I had never made Zhoug, which I’d always wanted to. And decided my overload of herbs meant it was time to give it a go.

Zhoug (or zhug) is a Yemeni sauce, traditionally made from parsley and/or cilantro. But these are untraditional times. It goes by different names in different countries and I’ve had some that were really hot and spicy, and others that were more focused on the herbs. 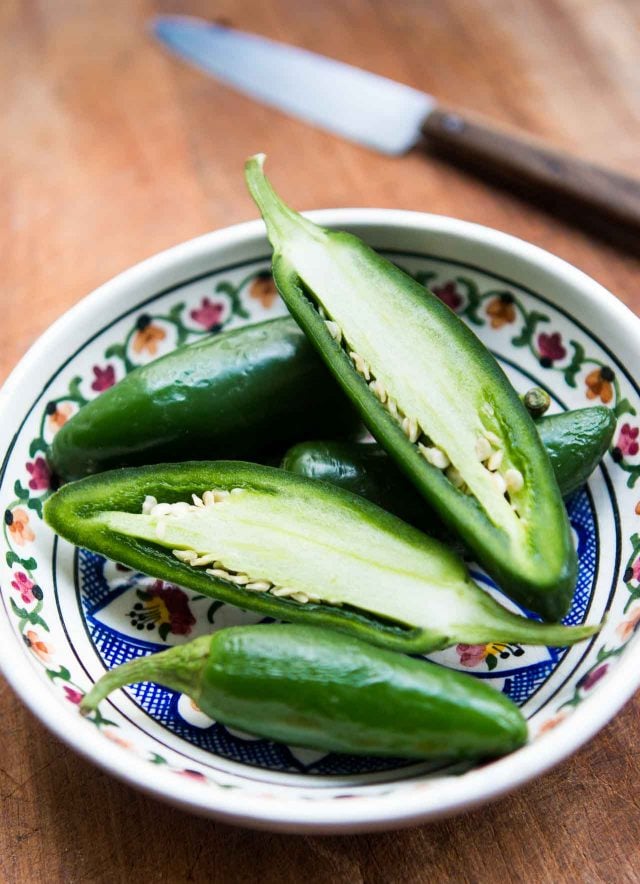 I painstakingly researched if you could make zhoug with fresh mint, and after hours of searching, I didn’t see anything that suggested you couldn’t make it with mint and call it zhoug. (The word means to pound or crush, similar to pesto.) I’ll probably hear about it soon, but I’m sure everyone can agree that it’s best to use up food that we have and not let anything go to waste, especially right now. So mint zhoug it is. 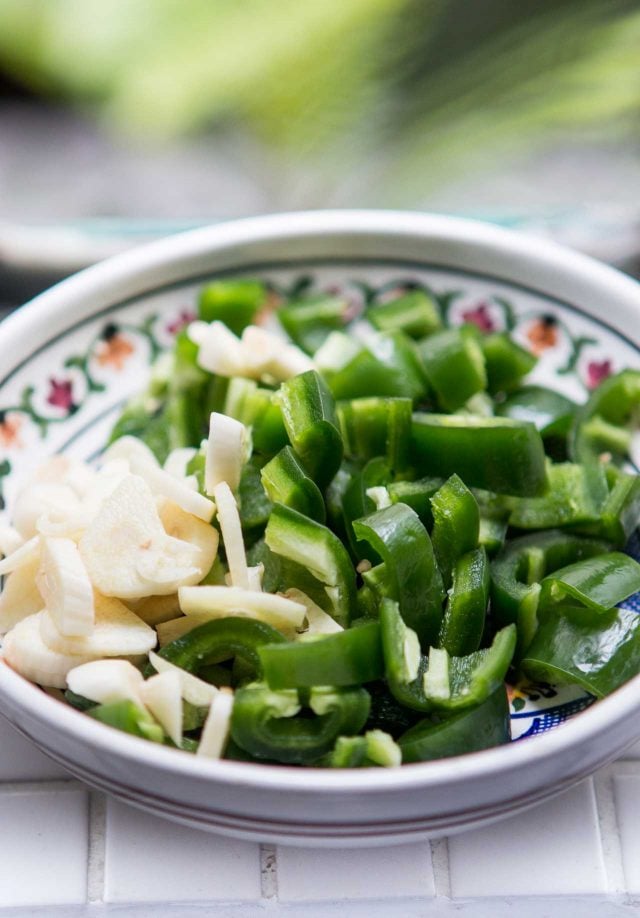 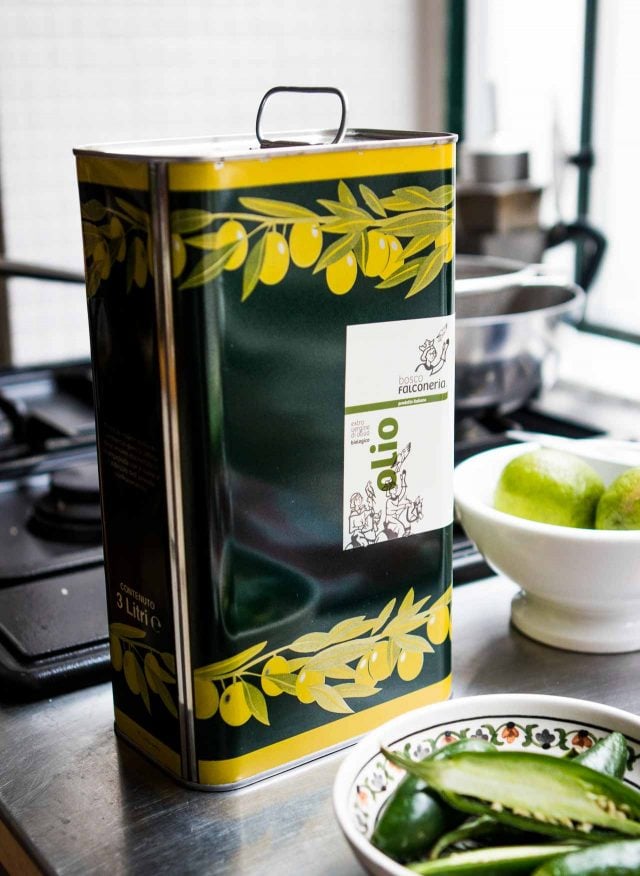 No one was happier than me during the lockdown to have a lot of olive oil on hand. I get my olive oil from Bosco Falconeria. Because there’s a minimum order, which is between 50 and 100 liters, I hit up friends to see who else would like some when I put in my annual norder. (Note that they can’t ship to the United States, but there are places to get their olive oil in smaller bottles in Europe and the U.K. such as here and here.)

A few responded with, “Oh, okay…I’ll take a liter.” Since I told them that it comes packed in 3 or 5 liter tins, several came back with, “Okay then…I’ll take 3 liters.” Three liters of olive oil would last me a month or two. To make the minimum order, I bulked up the order to get what I thought would be way too much for us. But who’s laughing now? I seem to be going through a liter (quart) a week. And I’m getting the midsection to prove it. 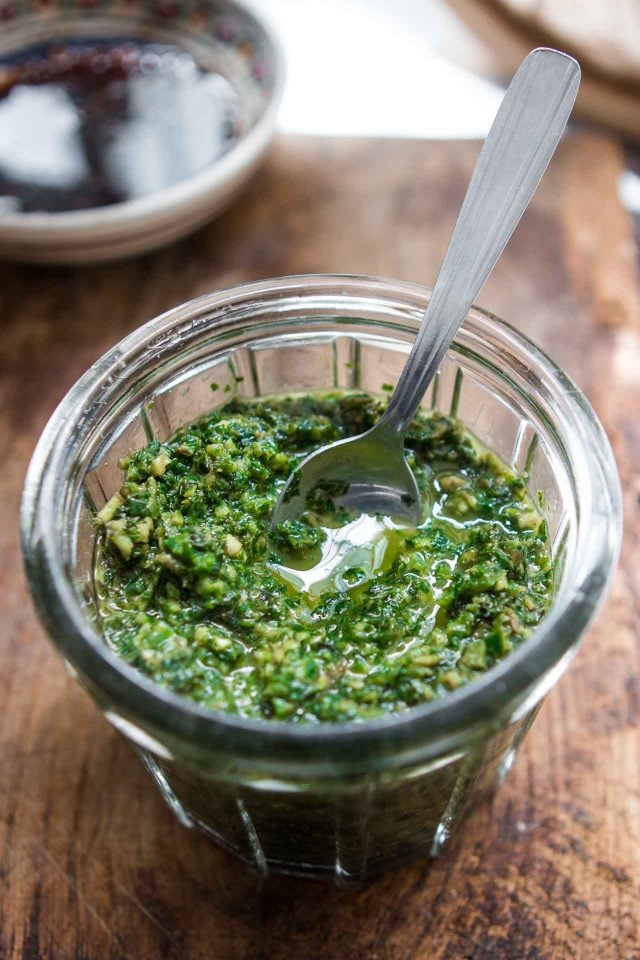 I used this zhoug on everything, from oven-roasted cauliflower, which was a match made in culinary heaven (we had it last night with roasted cauliflower and grilled chicken), to falafels, and shakshuka, to liven and spice them up. It’s not as fiery as some I’ve had, since jalapeños aren’t crazy-hot, but you could fix that using other chile peppers. Although this recipe made a lot, we quickly went through the jar. You’re welcome to cut the recipe in half if you don’t have an overload of fresh mint. But if you do, here’s a great way to use it up.

Note that I haven't tried this with other herbs but if you want to do so, you'll likely use less olive oil. Fresh mint isn't as "juicy" or humid as softer herbs. Cumin and cardamom seem to be constant spices used in zhoug but I've seen recipes that call for black pepper, coriander seed, and even caraway. So feel free to vary them to what you have or your tastes. Even if using fresh mint, I start with a smaller amount, as indicated by the recipe in Step #s, then add more as needed, until you get the spoonable consistency I did, as shown in the photos in the post. If you want the sauce to be hotter, you could add the seeds from the jalapeños. If unavailable, another chili pepper would work, but you'd want to adjust the quantity of them for spiciness and heat, depending on the hotness of the peppers. Lastly, if you don't have a food processor you could make this in blender or mortar and pestle. This recipe makes quite a bit, but it can be easily cut in half.
4 cloves garlic, peeled and coarsely chopped
4 jalapeño peppers, stems and seeds removed, coarsely chopped
1 teaspoon ground cumin
1 teaspoon ground cardamom
1 1/2 teaspoons kosher or flaky sea salt
5-6 cups (80-100g) loosely packed fresh mint leaves
8 tablespoons extra-virgin olive oil, plus more, if necessary
2 tablespoons water
1. Put the garlic, jalapeños, cumin, cardamom, and salt in a food processor. Pulse 3-4 times to get everything well-combined.
2. Coarsely chop the mint leaves and add about a third of them to the food processor along with 4 tablespoons of the olive oil. Pulse a few times. Lift the lid, then scrape the sides of the food processor bowl to incorporate any mint leaves sticking to it, then add the remaining mint leaves and the water. (If you want to sauce to be extra-rich, you could replace the 2 tablespoons of water with olive oil.)
3. Pulse the food processor for a few seconds at a time, stopping to scrape down the sides of the bowl again. Continue to pulse and process, adding additional olive oil, until you reach the desired consistency. The zhoug should be spoonable, the consistency of pesto. Taste, and season with additional salt or spices.

Storage: Fresh mint tends to discolor upon sitting and the top will darken when left to sit for a while. To mitigate that, store the zhoug in a narrow jar, with as little of the surface area exposed as possible, in the refrigerator. (The top will still darken but it's fine to eat and you can just give it a stir before serving.) You can also smooth the top and pour a layer of olive oil on it, or press a piece of food-safe wrap against the surface to prevent it from browning. It'll keep in the refrigerator for about a week. 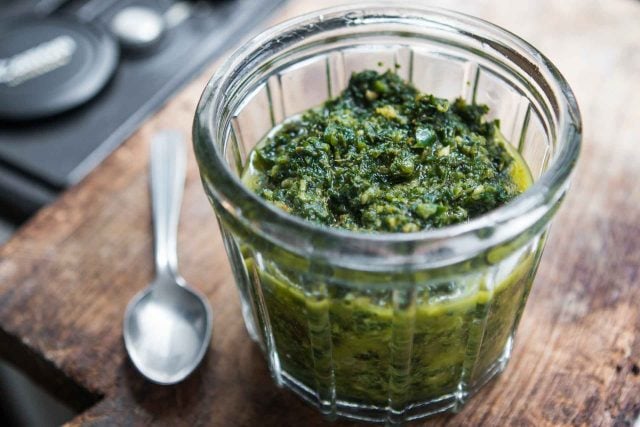 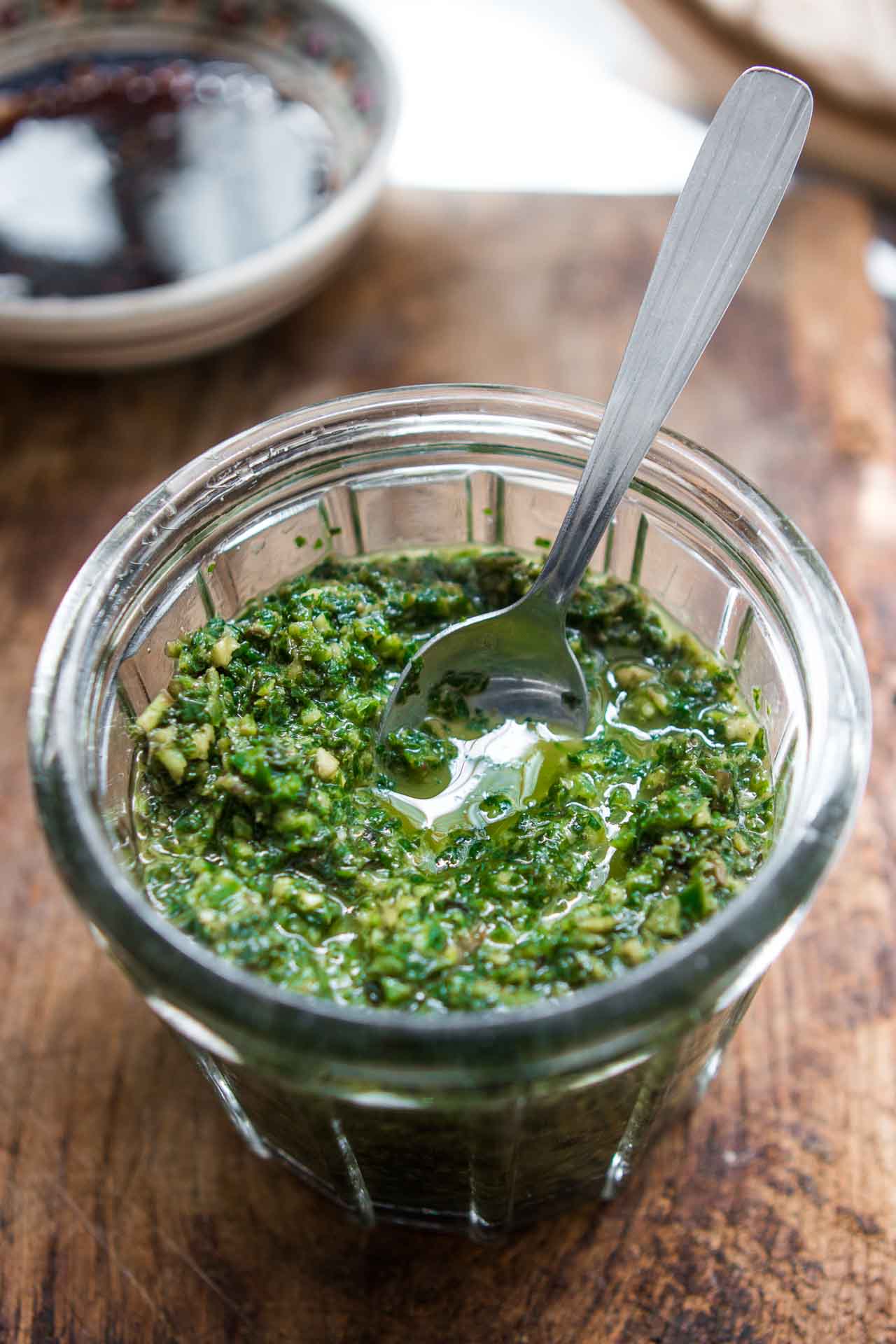