How To Use Gelatin 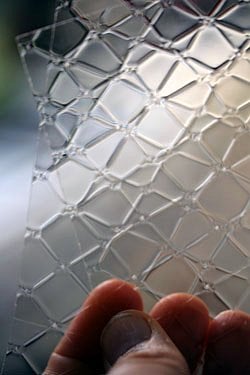 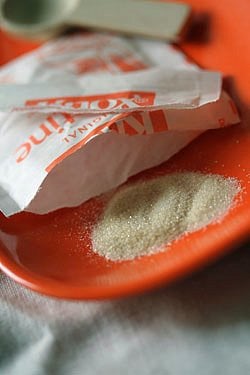 To Use Powdered Gelatin

-Sprinkle the granules of gelatin over the surface cold water or liquid. Use 1/4 cup, 60ml, or whatever quantity is called for in the recipe, per envelope. Do not dump the granules in as a pile as the granules in the middle won’t dissolve of “bloom” properly.

-Add warm liquid or heat gently, stirring until dissolved. To verify the granules are melted, lift the stirring utensil and make certain that there are no undissolved granules clinging to it.

To Use Sheet Gelatin

-Once soft, lift sheets from the cold water.

-Wring gently to remove excess water, than add to warm liquid, stirring until dissolved. If adding to a cold mixture, melt the softened sheets in a saucepan or microwave over very low heat, stirring just until melted completely. Then stir in the cold mixture gradually.

Tips and Facts About Gelatin

-If the recipe calls for packets (ie; 2 packets), use packets of gelatin for measuring.

-If the recipe calls for a specific amount (ie: 2 teaspoons gelatin), open the packets and measure the gelatin granules with a measuring spoon.

-1 envelope of gelatin will firmly set 2 cups of liquid, enough to unmold a dessert.

-1 envelope of gelatin will softly set 3 cups of liquid. You will not be able to unmold this type of dessert.

-Both sheet and powdered gelatin should be dissolved in cold water. If hot water is used, granules of gelatin will swell on the outside too quickly, preventing the water from getting into the center.

-Don’t boil things made with gelatin. High heat can make the gelatin lose its efficacy.

-Substituting sheet gelatin for powdered gelatin is perhaps the most controversial ratio known to the baking world. I’ve seen everything from 1 envelope equals 3, up to 5 sheets. Three-and-a-half sheets seem to work best for me. I use sheets that are 3-inches by 5-inches.

-Some people prefer to use sheet gelatin, claiming it has no odor and the gel sets finer. Another advantage is there’s also no chance of undissolved granules when using sheet gelatin.

-Gelatin is graded by “bloom’, which is a measure of the stiffness and strength of the gelatin. (Developed by a Mr. Bloom.) Knox gelatin is 225 bloom, sheet gelatin (gold) is 200 bloom. Here’s a guide to the various types of gelatin in this post by Modernist Pantry.

-Gelatin lasts forever according to the Gelatin Manufacturer’s of America. If the packet gives an expiration date, it has to do with a “degradation of the packaging.” So if the packaging is damaged or old, you may want to toss it and use a new batch.

-Certain tropical fruits, such as pineapple, kiwifruit, and ginger, have an enzyme (bromelin) that can prevent gelatin from setting. Heating the fruit completely through before using will destroy the enzyme.

-Adding gelatin to food can make it non-Kosher, Halal, or inappropriate for those on vegetarian diets. Most gelatin is derived from beef or pork, which isn’t always mentioned on the packet. (In France, it’s noted when it’s derived from pork.)

*Because there are many different producers of sheet gelatin, various brands will vary in strength and size. Use what’s recommended by the company where you buy your gelatin sheets, or on the package, as the manufacturer best to advise on the correct usage of their particular gelatin. For those concerned about the detailed math of the conversion, there’s an interesting discussion thread on eGullet.

Vegetarian Substitutions for Gelatin (The Kitchn)

Agar Agar is Inconsistent, But Here’s What We Know About It (Food52)

Powdered vs Sheet Gelatin: Converting between the two (Chef DRM)