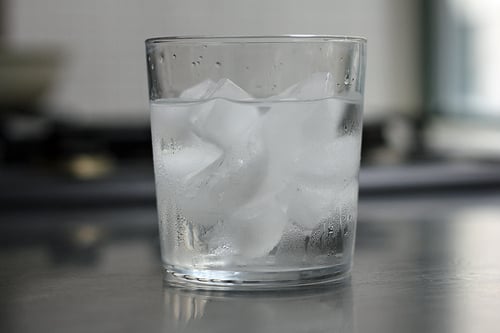 My new refrigerator has an ice maker. After living in Paris for close to ten years, I’ve kind of gotten used to not having ice-on-demand. And when out and about, I’m now used to being served drinks with just one puny ice-cube bobbing sadly on the surface of a tepid drink. So now, when I go back to the states, I’m always a little overwhelmed by the oversized glasses filled to the brim with brisk, frosty, cracklin’ ice cubes. Because I’ve rounded the corner of converting to some of the European habits (although the 5hr cycle on my dishwasher still baffles me – what the heck is going on in there?) I sometimes have to slip into that “Can I have water with no ice, please?” mode, which pegs me squarely in the minds of American waitpeople as one of “those” customers.

But the glacial movement that’s spread across North America doesn’t seem to be reserved just for France; it seems that there is a European conspiracy against the chilly beasts. One I got used to no ice, I really stopped giving ice much thought. But when visitors come, they would always want me to ask the café waiter for some extra ice for their drinks. Then the glass of ice arrives, with a long spoon, which they shovel into their drinks, scraping the bottom of the glass so as not to miss one single drop of the still-cold water.

I’ve heard all sorts of reasons why ice isn’t used over here. My favorite was that if you drink something with ice in it, your stomach will freeze. Which might explain all us uptight Americans, who just are in need of having our stomachs defrosted. (Or maybe we just need to take more of those five-week vacations that the French get*, to sit in the sun and melt down those icicles in our tummies.)

I think it’s a cost and space issue. French cafés and restaurants don’t have a lot of space, and running an ice machine is undoubtably costly and certainly takes up valuable real estate in tight quarters. However as a reader pointed out a while back, “The only time you get a lot of ice in Paris is when you order a cocktail!” – presumably because les glaçons are cheaper than the liquor. Or maybe it’s because they know that the alcohol counteracts all that ice, so you don’t need to worry about your stomach freezing up. 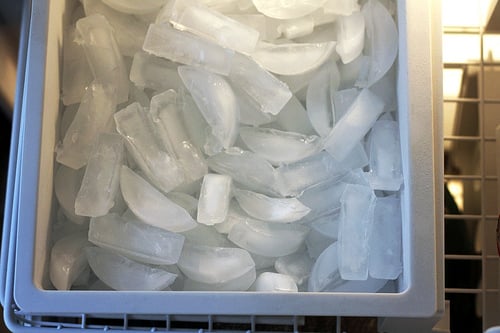 A friend of mine who entertained a lot, who has sadly moved, had an ice machine in her apartment here in Paris. Romain got one whiff of ice over at her place and never went back. And ever since that first sip, he’s made sure there’s always a bac à glaçons or two in the freezer at all times. Similar to how my friend Bryan pointed out, that no one in France would ever dream of wearing anything so declassé as polar fleece trousers – until they try them on and feel how comfortable they are.

So now we sit around the house, in our polaire pants, drinking icy-cold beverages. And no, you don’t need to worry about me, because I assume all that polar fleece keeps our stomachs warm. However I’m a little concerned that the ice movement may start growing, once other people get a taste of the cool refreshment of it. For those who don’t have ice makers, which I would venture to be the other 99% of folks in Paris (…and for those who said I’d never amount to anything, who’s laughing now that I’m part of the coveted one-percent of something!?) – you can order ice to be delivered right to your front door.

But even though I’m part of the icy élite, ice isn’t just a luxury around here. Since I do a lot of cooking – and cooling, I often need a stockpile of cubes to chill down custards, ice marble countertops** for rolling pastry in the summer, and occasionally, as part of my job—or because of my job…) — I need to invent a cocktail***.

*Hey, I’m not knocking it. In fact, I’m waiting for mine to kick in.

**Never mind that I don’t have a marble countertop to ice down.